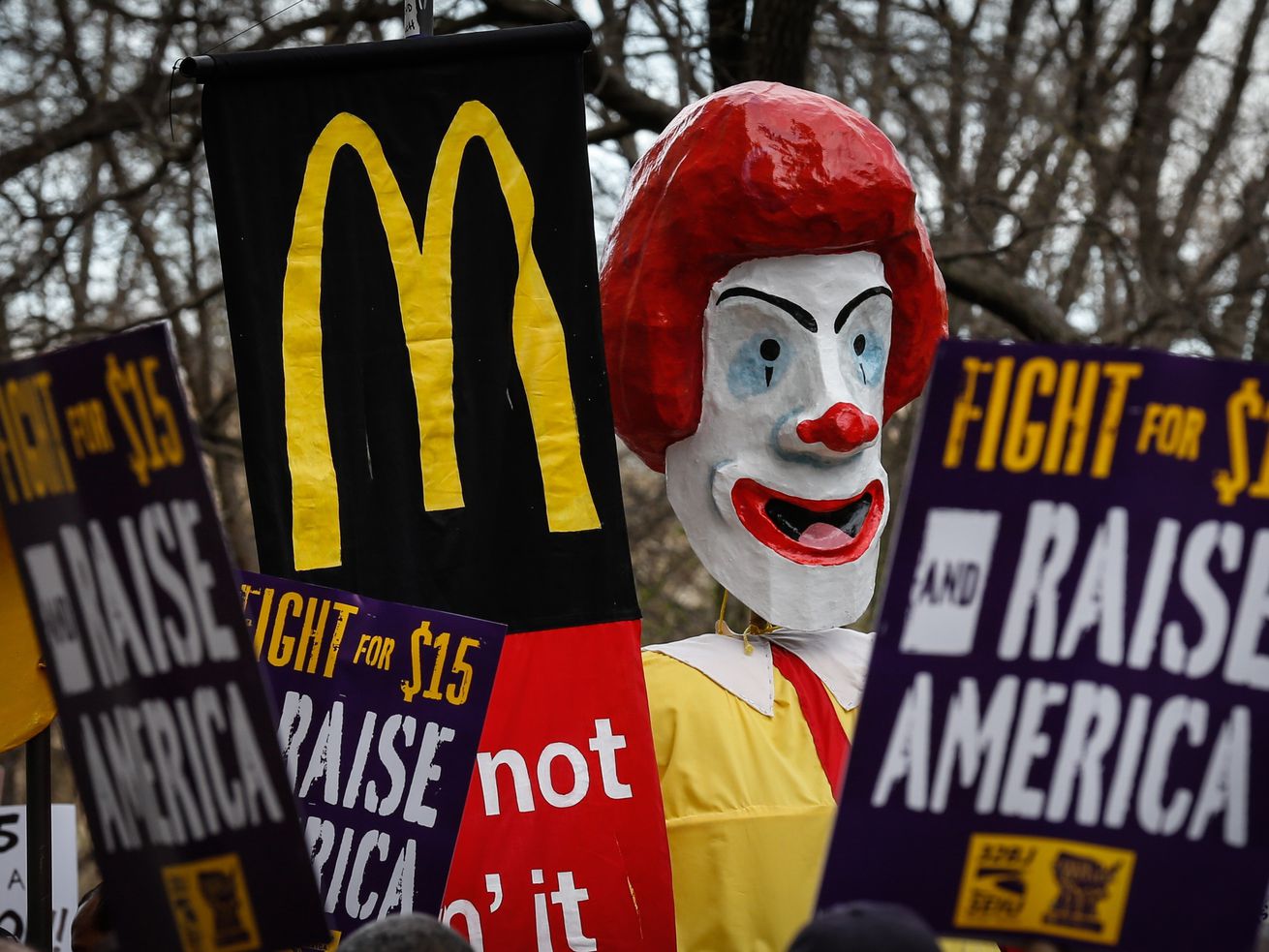 The Congressional Budget Office analyzed a bill to double the federal minimum wage, and its findings show a higher risk of job losses than recent academic research.

A $15 federal minimum wage would likely boost pay for 27 million US workers, lifting 1.3 million households out of poverty, according to an analysis released Monday by congressional economists.

But the income boost may come with a cost: It could trigger 1.3 million job losses.

The nonpartisan Congressional Budget Office released this conclusion in a report that analyzes the economic impact of the Raise the Wage Act, a House bill that would gradually double minimum hourly pay by 2025.

The report comes as members of Congress prepare a vote to increase the federal minimum wage for the first time in more than a decade. It’s only the second study ever to focus entirely on the impact of a $15 minimum wage, and its findings are less rosy than the first one.

The other study comes from economists at the University of California Berkeley, who released a white paper last Tuesday finding that a $15 minimum wage would go a long way to combat income inequality — while its impact on job loss is likely small to none.

The CBO score doesn’t necessarily contradict those findings, but it does offer a broader read of the available data. And that read may renew debate in Congress over how high to raise the federal pay floor.

The Raise the Wage Act, explained

Congress set a record in June: It’s now been more than 10 years since lawmakers have raised the federal minimum wage, the longest period in history that it’s stayed stagnant.

The current $7.25 minimum hourly rate was set in 2009, right in the middle of the Great Recession. Since then, America’s lowest-paid workers have lost about $3,000 a year when you consider the rising cost of living, according to calculations from the Economic Policy Institute.

In January, House Democrats introduced the Raise the Wage Act, which would eventually raise the federal minimum wage to $15 an hour by 2024. The law would also tie future changes to changes in median workers’ pay. So if middle-class wages go up — or down — so would the minimum wage.

The bill, which has more than 200 co-sponsors (all Democrats), would also phase out the lower minimum wage for tipped workers such as restaurant servers and valets, which has been $2.13 an hour since 1996.

Big business groups are not happy about the fight for $15. Neither are their Republican allies in Congress, who have long pushed back against any effort to raise the federal minimum wage.

But it’s hard to deny how popular the idea is with regular voters. Poll after poll shows widespread support for raising the federal minimum rate, even among Republican voters. And a majority of voters want at least $15 an hour. It’s no wonder why the vast majority of Democrats running for president have promised to double the federal minimum wage.

Corporate America must have sensed the shift in public opinion. McDonald’s executives recently announced that the company would no longer lobby against minimum wage increases. The president of the US Chamber of Commerce said earlier this year that he was open to the idea of raising the pay floor.

For a while, Democrats were torn on how much to raise wages. Rep. Terri Sewell (D-AL) introduced an alternative bill in April, which would create different minimum wage levels depending on the region. Only businesses in the most expensive areas would have to pay workers at least $15 an hour by 2024. The main problem with that bill, though, is that every state needs to hike minimum pay. There’s really nowhere in the country where minimum wage workers can afford to rent a modest two-bedroom apartment if they work full time. So far, only 11 other House Democrats support the bill, and no Republicans are interested in it.

In the past few weeks, however, Democrats have signaled that they finally have enough members on board to pass the $15 wage bill this month. The lead author of the bill, Rep. Bobby Scott (D-VA), said Monday that hasn’t changed since the CBO report was released.

“What the report makes clear is that the benefits vastly outweigh any costs,” Scott said on a conference call with reporters. “I am confident that the votes are there.”

It’s impossible to predict exactly what will happen if businesses need to pay some employees more than the current $7.25 minimum federal rate. Will they fire some employees to cover the added cost? Will they make customers pay the difference? Will they just decrease benefits? No one can know for sure.

To get an idea, economists look at what has happened in cities and states that have raised minimum pay. The most recent research shows that wage hikes lead to minimal — or zero — job losses.

The CBO report doesn’t necessarily contradict those findings. But it does include a much wider range of scenarios. Yes, there’s a good chance no jobs will disappear, but there’s also a good chance that 3.7 million jobs could. So their median estimate is 1.3 million losses.

Congressional economists also analyzed possible outcomes with a smaller wage increase. A $12 minimum wage, for example, would lead to median job losses of 300,000. A $10 hourly minimum could trigger about 100,000.

CBO used data from 11 studies published in the past four years to come up with its own estimates. The office specifically picked studies that recorded the short-term impact of minimum wage hikes on job losses and gains in low-paid industries. They compared the share of jobs that paid more after a minimum wage hike to the change in overall jobs that were available to the workers affected by the policy changes. That allowed CBO economists to calculate what might happen with a $15 federal minimum wage.

The impact of raising the minimum wage is one of the most closely studied — and debated — subjects in economics.

It used to be taken for granted that raising the minimum wage would decrease the number of low-wage jobs, and that teenagers would have more difficulty finding part-time work. Economists published research in the 1970s showing that it did happen, likely because restaurants and department stores had to cut jobs and work hours to cover the cost of paying employees more.

But in the past decade, progressive economists have challenged these assumptions with new data that is now available.

Dozens of Democratic-held cities and states have increased the minimum wage floor over the years, well above the current federal minimum of $7.25 an hour. Recent research suggests the worst-feared consequences of minimum wage hikes did not come to pass: Employment did not decrease in places where wages went up, and there was actually a residually positive effect on wages for other lower-income workers.

However, disagreement often revolves around how extreme the job cuts would be. The new white paper from Anna Godoey and Michael Reich at Berkeley provides more evidence that the impact on jobs is insignificant. (The CBO report did not analyze findings from that study because it was only released last week.)

Their study found that raising the federal minimum wage to $15 an hour by 2024 would likely boost incomes for the poorest households in rural counties. They found no evidence that such a large wage hike would lead to significant job losses or fewer work opportunities — something big business groups often warn about.

As Congress prepares to vote on a bill to gradually raise the federal minimum wage from $7.25 to $15 an hour, the study sheds light on how far such a policy change could go to shrink income inequality in some of America’s poorest regions. For example, in Alabama, minimum wage workers currently earn about 45 cents for every dollar earned by a median wage worker. If the federal pay floor were to double, that gap would shrink to 77 cents for every dollar, the study says. The change would also shrink income inequality in states that already have smaller pay gaps, such as California.

Godoey and Reich analyzed pay data for millions of households in more than 750 counties, and their research stands out for several reasons.

First, it’s the only major pay study that relies on county-level income data, making its conclusions more precise; previous research has focused almost exclusively on state-level data. More local data allowed researchers to get a better sense of what could happen in rural counties, compared to urban centers. Second, it focuses on the impact of raising pay in areas with the largest share of minimum wage workers. Previous research has mostly focused on cities and states that have already raised the minimum wage, where workers tend to earn more money. And third, it’s the first research paper to analyze a wage hike as high as $15 an hour. Before, the highest pay rate studied was $13 an hour.

To find out how a $15 minimum wage might affect rural areas, researchers measured the gap between the minimum wage and the median wage in those areas if they had a $15 hourly pay floor. Then they compared it to places with a similar gap. That allowed researchers to calculate what might happen in rural counties. They found no negative effects on jobs.

In sum, “the US can absorb a $15 minimum wage, without significant job losses, even in low-wage states,” Godoey told journalists on Tuesday in a conference call.

The study is hardly definitive, but it adds to a growing body of research that is challenging long-held assumptions about the impact of raising the minimum wage: specifically, the view that it would hurt workers more than it would help them.

The most recent meta-analyses on minimum wage increases, which analyze several research findings together, suggest that the increase’s likely impact on employment would be minimal.

Take the 2016 study by economists at Michigan State University, which crunched data from 60 studies on the minimum wage in the United States since 2001. It concluded that a 10 percent increase in the minimum wage would likely reduce overall employment in low-wage industries by 0.5 to 1.2 percent.

Another meta-analysis comes in a highly anticipated study forthcoming in the Quarterly Journal of Economics by economists at the University of Massachusetts, University College London, and the Economic Policy Institute. They studied data from 138 cities and states that raised the minimum pay between 1979 and 2016. The conclusion is that low-wage workers received a 7 percent pay bump after a minimum wage law went into effect, but there was little or no change in employment. The study also showed that it would not cost jobs, even in states with large shares of minimum wage workers. The latest study by Godoey and Reich, which expands the analysis to the county level, supports those findings.

In yet another research paper soon to be published in the American Economic Journal: Applied Economics, economist Arindrajit Dube shows that raising the minimum wage significantly reduces the number of families living in poverty. For example, he concludes that a $12 minimum wage in 2017 would have lifted 6.2 million people out of poverty.

These outcomes are far more optimistic than congressional economists expect.

While all the new research helps Democrats in Congress make their case for doubling the federal minimum wage, the CBO report will give opponents more reason to push for a smaller wage hike.