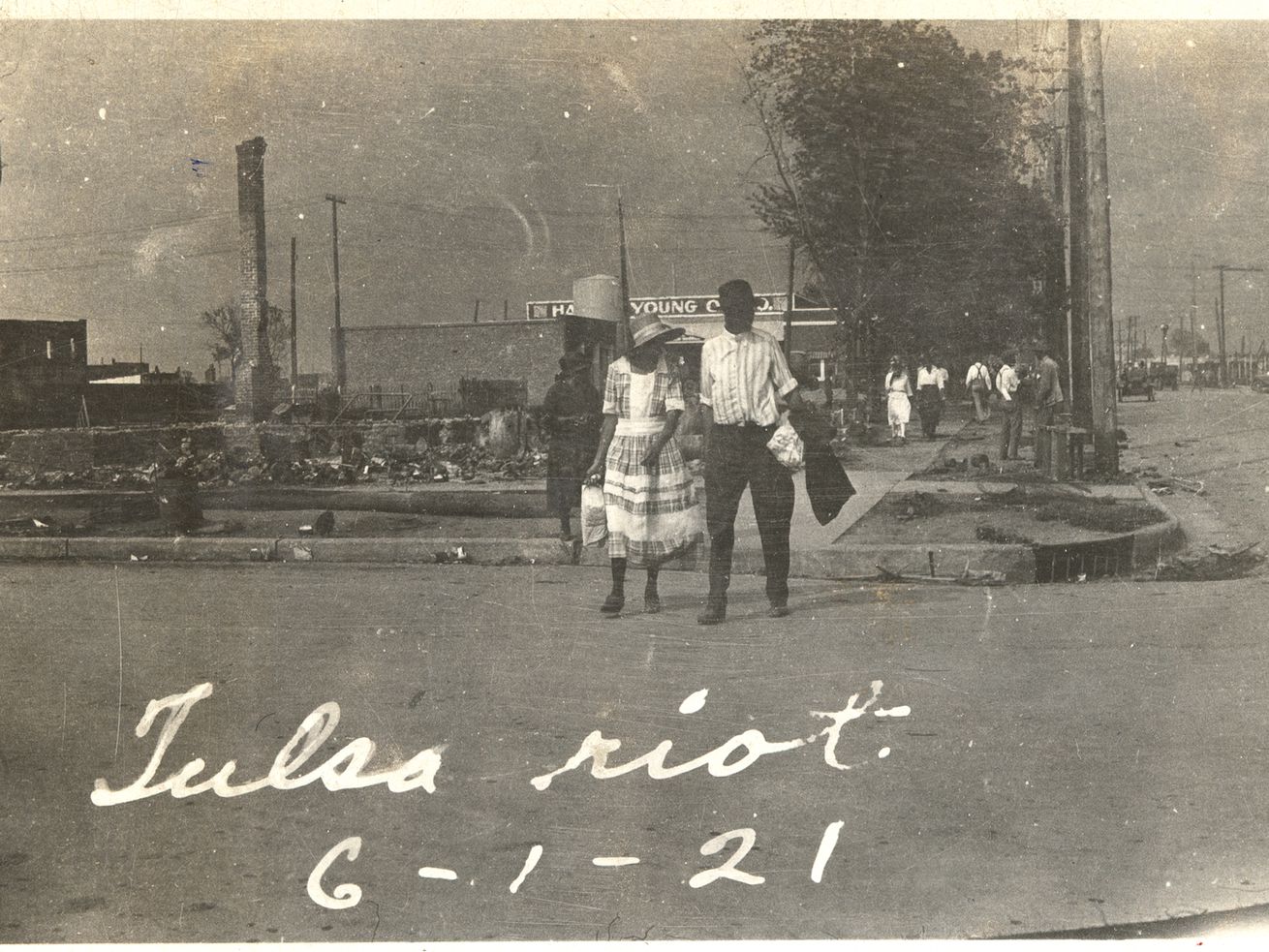 A black couple walks across a street with smoke rising in the distance after the 1921 Tulsa race massacre. | Oklahoma Historical Society/Getty Images

It was covered up for decades.

As protests erupt across the country in reaction to George Floyd’s death at the hands of Minneapolis police, America is also marking the anniversary of one of its worst incidents of racial violence — and one that was covered up for decades.

May 31 and June 1 mark the 99th anniversary of the 1921 Tulsa race massacre, when a white mob descended on an affluent black community in Tulsa, Oklahoma. The Greenwood District, which was known as “Black Wall Street,” was decimated in a matter of days. Roughly 1,200 homes were burned, 35 blocks burned, and an estimated 300 black people killed.

The massacre was largely brushed over for decades — records of it disappeared, and it wasn’t often talked about. When it was, it was dubbed the Tulsa race “riot” as a way to muddy the waters of what happened and make it seem that both sides were equally at fault. In the 1990s, Oklahoma put together a commission to try to find out what happened in the 1921 massacre, and in 2001, it released a report on its findings. From its prologue, written by then-state Rep. Don Ross:

A mob destroyed 35-square-blocks of the African American Community during the evening of May 31, through the afternoon of June 1, 1921. It was a tragic, infamous moment in Oklahoma and the nation’s history. The worse civil disturbance since the Civil War. In the aftermath of the death and destruction the people of our state suffered from a fatigue of faith — some still search for a statute of limitation on morality, attempting to forget the longevity of the residue of injustice that at best can leave little room for the healing of the heart. Perhaps this report, and subsequent humanitarian recovery events by the governments and the good people of the state will extract us from the guilt and confirm the commandment of a good and just God — leaving the deadly deeds of 1921 buried in the call for redemption, historical correctness, and repair.

Nearly two decades after the report was written, Tulsa continues to grapple with the massacre and to try to find out what happened. The location of the bodies of those killed during the incident is still unknown.

A wave of anti-black violence swept across the United States after the end of World War I. Black veterans who had served the country were met with disdain by racist whites, and racial tensions were high — as Olivia Waxman outlined in Time, black Americans who moved to cities in the North were met with prejudice, as were black sharecroppers in the South. In the summer of 1919, known as the Red Summer, racial violence targeting black people erupted across the US.

That is important context for the massacre in Tulsa in 1921, which was sparked when a black teenager named Dick Rowland was arrested for allegedly attacking a white female operator. A white mob gathered outside the courthouse where he was being held, and black men also gathered outside to try to protect him from being lynched.

According to a timeline from Tulsa World, things declined from there. White people broke into stores to take guns and ammunition, and there were reports of looting and haphazard shooting downtown. White mobs descended on Greenwood, and many residents of the district fled. Buildings were destroyed and set ablaze, homes and businesses were looted, and reports suggest police officers took part in the mayhem as well. The Oklahoma governor declared martial law and called in the National Guard. Many black people were arrested, but whites weren’t.

After the violence ended, there was an effort to erase it. Records of it disappeared, and for decades, it wasn’t talked about much at all, nor did it appear in history books. Whites moved on with their lives, and blacks tried to put theirs back together. As the Tulsa Historical Society and Museum notes, no criminal act from the massacre “was then or ever has been prosecuted or punished by government at any level.”

That’s part of the reason there is probably a lot we will never know about it — exactly how many people were harmed or died, what happened to the survivors. There’s an ongoing effort to try to figure out even where the bodies of those killed are buried.

In recent decades, there have been efforts to reach out to survivors for their firsthand accounts of what happened. In 2018, Charles Blow at the New York Times spoke with Olivia Hooker, one of the last known survivors of the massacre. She described white men breaking into her family’s home, destroying her sister’s piano, pouring oil on her grandmother’s bed, and stuffing a dresser with ammunition. “I used to scream at night. I didn’t sleep. I had nightmares,” she said of the trauma she suffered.

In 1999, Brent Staples published a story in the New York Times on the unearthing of the truth about the massacre. It included multiple firsthand accounts, including from a man named Elwood Lett, who had recently died at the age of 82:

Five white men came to his family’s house but surprised them by allowing the grandfather to place his daughter and two grandchildren into a wagon so that they could leave town. ‘’I was happy to know they didn’t shoot him or kill him there at the house,’’ Lett recalled. ‘’He’s thinking, ‘They’re pretty nice people by letting us get in the wagon and go on about our business.’ . . . We hadn’t got to the town of Sperry before this white guy asked, ‘Where in the hell you going?’ — using the ‘N’ word. My grandfather said, ‘We’re heading out, we’re going out of town.’ And he said, ‘Not this day you’re not going out of town.’ Bam! . . . And he just tumbled. My mother let out a scream: ‘Oh, you have killed my father, you’ve killed him,’ and I thought he was going to do the same thing to my mother.’’

There have been calls from many corners for reparations for the victims of the attack. In his influential 2014 piece “The Case for Reparations,” writer Ta-Nehisi Coates cited the incident in his argument.

This year, the Tulsa massacre anniversary lands amid intense racial violence in the US

The 2020 anniversary of the Tulsa massacre arrives at a uniquely horrible moment that has acutely affected black Americans. George Floyd, a 46-year-old black man, was killed during an arrest on May 25 when a police officer pinned him by the neck with his knee for nearly nine minutes, even when he pleaded with him that he couldn’t breathe. Floyd’s death is the latest in a centuries-long history of anti-black violence.

In the wake of Floyd’s killing, demonstrators across the country have taken to the streets to protest police violence and draw attention to the way black lives are undervalued and mistreated. Many of the protests have been peaceful, but some have turned violent, and when they turn violent, it is often black demonstrators who run the highest risk of being hurt. Businesses are being looted and burned, police and protesters are clashing, and some communities are being destroyed.

And beyond the protests, right now, people of color are also being disproportionately sickened and killed by the coronavirus crisis. They’ve also been hit harder by the economic crisis and lost their jobs at higher rates.

“Before COVID-19, America’s virus was racism,” Rev. Robert Turner told demonstrators at a protest in Tulsa on Saturday, according to Tulsa World. “We are sick and tired of this disease. We demand a vaccine. Social distancing can’t kill racism. A face mask can’t kill racism. Nothing but the truth can cure it.”