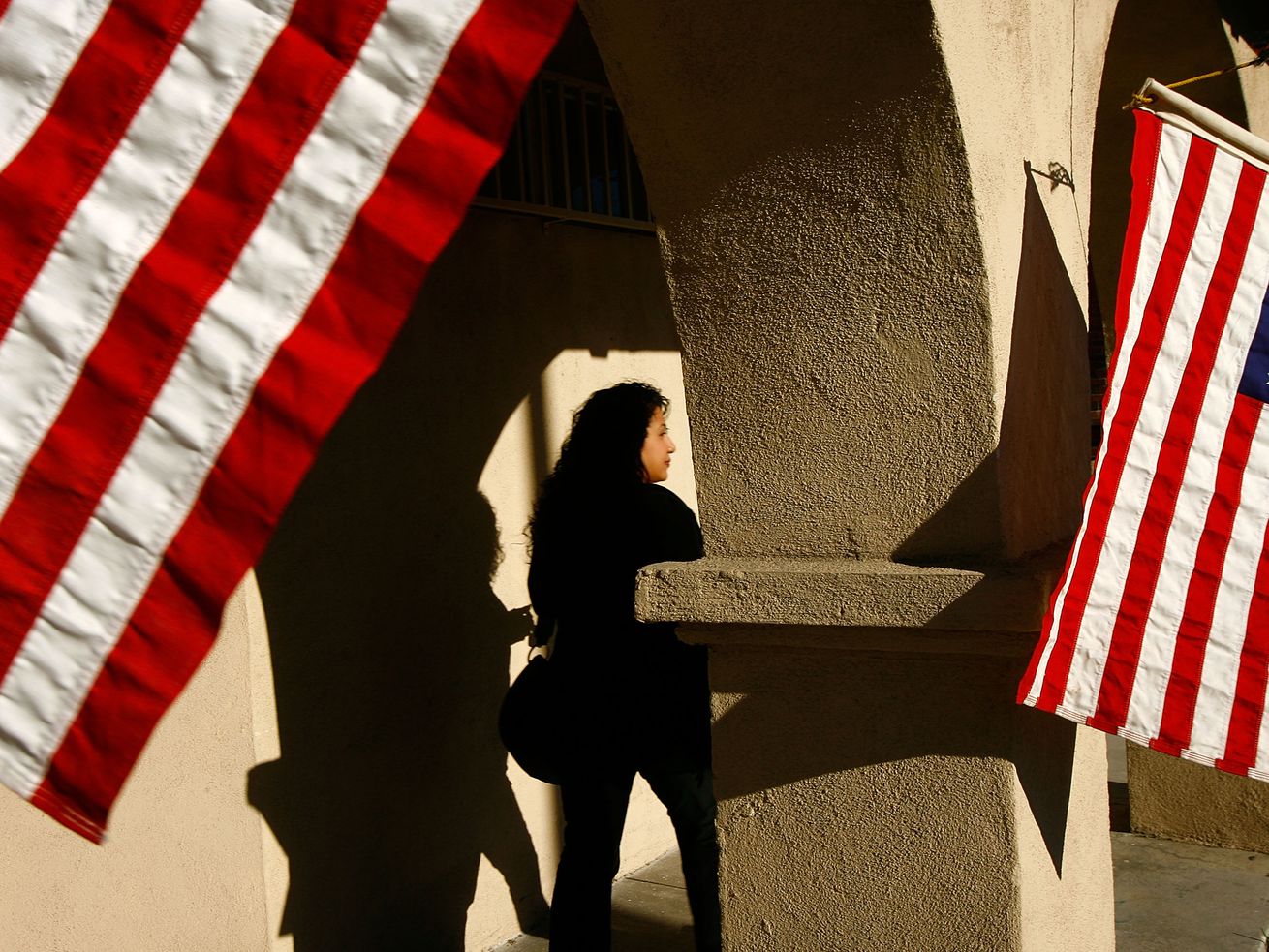 It really comes down to whether Democrats invest in voter outreach.

Poll after poll now shows that Hispanic and Latino voters are increasingly souring on President Donald Trump in the wake of the administration’s controversial immigration policies and its bungled handling of Puerto Rico disaster relief.

Yet even though the president seems to be trending negative, his numbers among Hispanic and Latino voters aren’t nearly as bad as they are among some other groups. In a recent Quinnipiac poll, 58 percent of Hispanic voters said they did not consider Trump fit to be president, a figure surpassed by women and Democrats more broadly:

Many political science experts note that Trump’s unpopularity is far from enough to suggest that Hispanic and Latino voters will turn out for Democrats in the fall.

“You can use this as a big ingredient for mobilization, but you can’t just depend on it in itself,” said Victoria DeFrancesco Soto, a lecturer who studies elections at the University of Texas Austin. Soto and others emphasize that Hispanic and Latino voters encompass a wide-ranging group with divergent attitudes on many issues, which means they don’t often vote as a unified bloc.

Democrats need to dial up their efforts on voter outreach if they want to channel this sentiment into actual support at the polls in November, experts say. The party has long banked on support from Hispanic and Latino voters, who could be key for flipping purple states and districts — but has struggled to actually get them to the polls on Election Day. This is, in large part, because it hasn’t invested enough resources into actually connecting with voters, according to experts.

These responses have been lightly edited for length and clarity.

Our polling of Latinos has found a sharp increase in frustration and anger with Trump and his policies over the past 18 months. From his repeal of DACA to his policy of child separations, Latino voters are expressing an all-time high in terms of anger. There is a sense in the Latino community that Trump is increasing discrimination, racism, and hate-speech against Latinos and immigrants, and this has become a call to action for many Latinos today.

The source of the negative sentiment about this administration has to do with the issues of family separation at the southern border, the increase in ICE raids, the ineffective response to Hurricane Maria in Puerto Rico, and other perceived attacks of the Latino community.

The question that remains is whether or not Latino voters will turn out to vote at higher or lower than expected levels.

There are numerous reasons why people may think that Trump is unfit to be president. For many Latinos, though, the reason centers around issues of immigration and ethnic prejudice.

This sentiment started with Trump’ s announcement that he was running for president in which he called many of the people coming across the border rapists, and said Mexico wasn’t sending its best people.

The president’s statements on Puerto Rico’s hurricane crisis no doubt troubled many Hispanic Americans, most acutely the victims who had to move to the mainland.

The president’s standing with black and Hispanic voters has always been weak. His immigration policy has not wavered and that strikes a painful, enduring, emotional chord.

Latino voters look a lot more like independents than Democrats

The Quinnipiac poll is consistent with other recent surveys that show that most Latino voters hold negative views toward Trump, but by a much smaller margin than Democrats overall. Indeed, Latino views in this survey are closer to those of independents which, of course, defies the notion that Latinos are a steadfast Democratic constituency and the presumption that Trump’s immigration policies have alienated large numbers of Latinos.

On the [presidential fitness question], the Latino split 58/35 is much closer to that of independents’ 53/42 than that of Democrats’ 96/3. On the basic approval question, a third (33 percent) of Latino voters say they approve of Trump, about the same as independents (36 percent) and college-educated whites (39 percent) but a big distance from Dems (4 percent) or black people (9 percent). That third is about the GOP baseline of Latino votes in presidential elections.

You can see that the number of Latino/Hispanic people who say Trump is unfit is lower than other groups like African Americans and millennials (those currently aged 18 to 35). This is not surprising because Hispanics are more diverse in their political attitudes and policy preferences (especially compared to African Americans). Particularly on economic issues, there is a certain percentage of Latinos that probably favor the tax cuts Trump supported and the deregulations that he has implemented.

Overall, the numbers across the different groups stating that Trump is unfit do not bode well for Republicans in the midterms. Two very important figures here are independents and Hispanics — both groups above 50 percent in thinking he is unfit.

The independent vote can very much sway elections in many “purple” districts, and Hispanics, if they are mobilized to vote (along with young people and African Americans) can make this a wave election for Democrats.

However, the Latino community is very diverse and not a cohesive group. The president has both supporters and detractors among them. For the midterms, Republican candidates at the state and district level have, to a large extent, made a choice to campaign in step with the president. It will be interesting to see how this plays out in different districts where the Latino vote is the difference between winning and losing.

The president will be stronger in some geographic areas. For instance, in our NBC News/Marist poll of Florida earlier this summer, the president’s rating was divided among Latinos — 40 percent approved to 45 percent disapproved. When asked which party they wanted to control Congress, 33 percent said Republican and 36 percent said Democrat.

In Florida, where there are many Cuban Americans — traditionally more conservative and more likely to vote Republican — the expectations for the president’s party to do better are higher. In an NBC News/Marist poll of Texas, the president’s approval rating among Latinos is 27 percent and his disapproval is 58 percent. This may make contests in Texas more competitive.

It all comes down to Hispanic and Latino voter turnout. Really.

The big question for 2018 is whether or not civic groups, campaigns, and candidates turn this anger into action in the form of voter turnout. Anger by itself does not guarantee a surge in voting. Voters have to believe that through their vote, they are alleviating their frustration and that the candidate they vote for will work to solve the issues they are angry about.

That means that civic groups and candidates in particular need to do more to capitalize on the anger that exists and connect the dots for voters to explain why and how they will stand up for the Latino community.

If Democrats assume that they can expect higher voter turnout based on feelings of political threat or angst without investing in voter mobilization, this will likely lead to disappointing electoral participation.

On the other hand, if Democrats invest in voter mobilization of Latino voters, they can harness the negative sentiments about this administration among Latino and help their candidates at statewide and down-ballot races.

I will say that Hispanic voter turnout is consistently low (in 2016 it was lower than white, black, and Asian voter turnout), which is typical. White and black voter turnout is historically higher — significantly higher. And, of course, it’s not surprising that there is strong disapproval of the president among Hispanics. The effects of immigration policy and enforcement changes hit this community hard.

Whether or not this disapproval will translate to a record number of Hispanics showing up to the polls in November? That’s doubtful. Latino voters make up about 12 percent of registered voters, and, according to Pew, 44 percent of these are millennials. Young people vote at significantly lower rates than other age groups, and this is true for Latino millennials as well.

One point I would make is whether the 58 percent dissatisfaction will actually translate to the voting booths is questionable. There are other polls that suggest that both parties still have a lot to do to education and mobilize Hispanic voters so that they actually go out and vote. Hispanics historically have a low voter turnout, and while the numbers suggest dissatisfaction, it may mean nothing if they don’t go out and vote.

I think Trump’s high negatives among Hispanics in the Quinnipiac poll are bad news for the Republican Party as we head into the midterm elections because Hispanic voters could be decisive in several key races.

Other polls have found that they are not just unhappy or unsatisfied with his administration, but that they are angry. Anger is a strong motivator to fight back, and one way folks do that in the United States is to vote against the incumbent political party in midterm elections.

If Democrats are able to channel that anger into votes, which they are working hard to do, that could be part of a blue wave in November that flips control of the House, and even maybe the Senate.