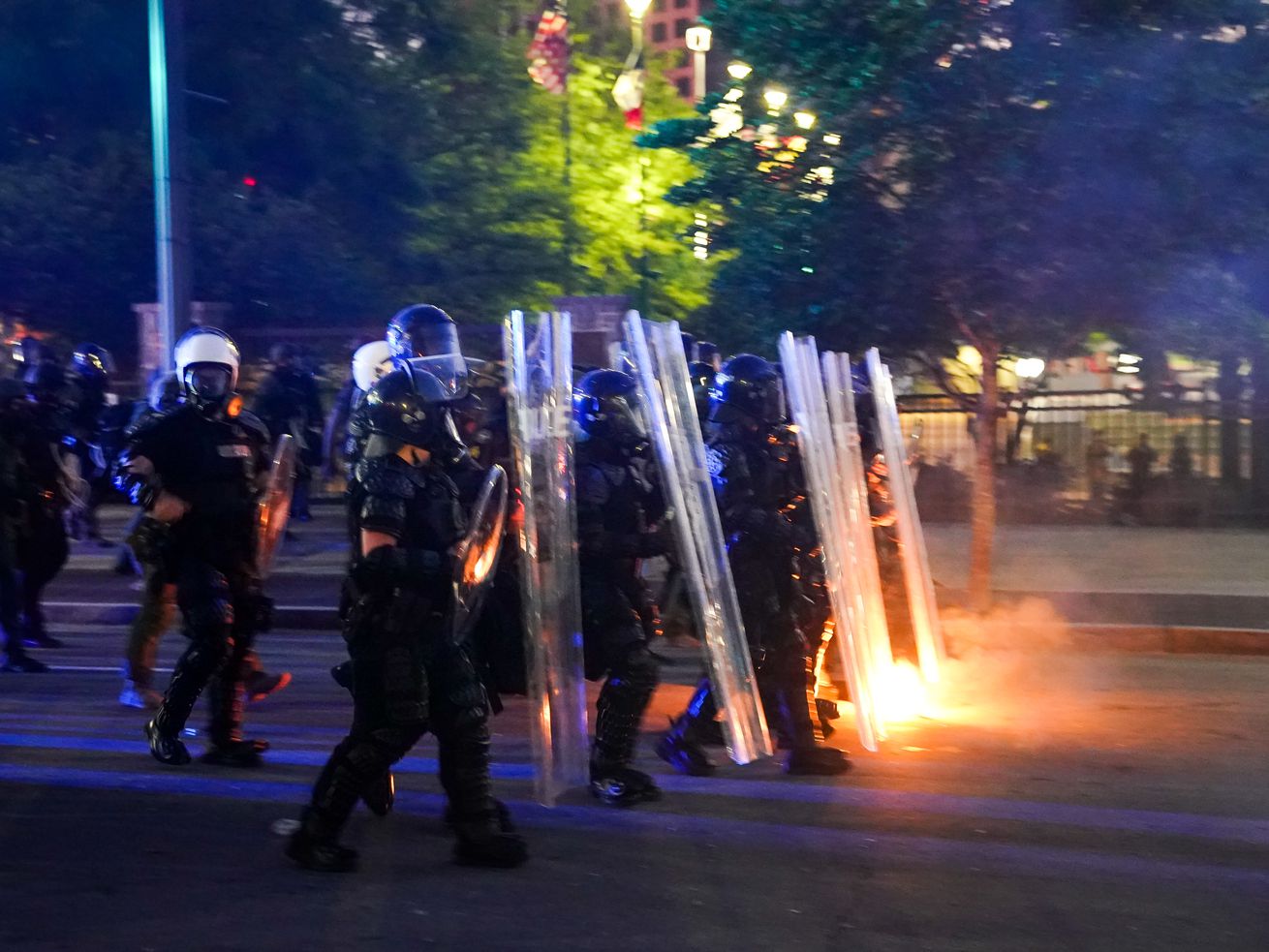 Police officers advance after firing tear gas during a demonstration on May 31 in Atlanta, Georgia. | Elijah Nouvelage/Getty Images

A 22-year-old student was left with a fractured arm and needed 20 stitches from the encounter, according to his attorney.

The officers stand accused of aggravated assault, illegally pointing a taser, and criminal damage to property, said prosecutors. Video of the brutal arrest went viral over the weekend, leading to the firing of two officers involved; three others were placed on desk duty.

“The conduct involved in this incident is not indicative of the way that we treat people in the city of Atlanta,” Howard said in a news conference on Tuesday.

Police exercise increased force as tasers are used to pull two people from a vehicle in downtown Atlanta.https://t.co/dSjEgItPcy

As seen in police body camera footage, a group of officers surrounded a car that 22-year-old Messiah Young was driving. They opened the passenger’s side door, and demanded 20-year-old Taniyah Pilgrim, who was sitting the passenger’s seat, get out.

Although Pilgrim asked repeatedly what was going on, she did not receive an answer. As officers attempted to pull her from the still-moving car, she screamed for Young to stop the vehicle.

That’s when police, without giving her time to get out, hit her with a taser. Separate body camera footage shows another officer used his baton to smash out the driver’s side window before tasering Young. The two were subsequently dragged out of the car and placed under arrest. All of this occurred as other officers on the scene slashed the tires on the car — which can be seen in the video that went viral.

According to his attorney, Young suffered a fractured arm and needed 20 stitches as a result of the incident.

“We felt like we were going to die in that car,” Pilgrim said Monday.

The incident has brought widespread condemnation from city leaders. “I know that we caused further fear to you in a space that’s already so fearful for so many African Americans, and I am genuinely sorry,” Atlanta Police Chief Erika Shields said in a news conference Sunday. “This is not who we are. This is not what we’re about.”

Atlanta Mayor Keisha Bottoms said Sunday that charges against both students were dropped and that Young was released from police custody.

The arrest warrants come amid outcry over how police have responded to protests around the nation — and as videos of violent police interactions with protesters go viral. In New York City, video of two police SUVs plowing into protesters went viral, prompting an excuse from Mayor Bill de Blasio that he later tempered. Dozens of journalists have been assaulted and arrested by police while covering the protests. Monday, law enforcement officials in Washington, DC, were criticized for using military tactics on protesters and for clearing a peaceful protest in front of the White House with tear gas in order to facilitate photographs of the president.

The most high-profile case is perhaps that of Steve Conrad, who was fired from his post as Louisville, Kentucky, police chief after it was discovered that two officers involved in the fatal shooting of area businessman David McAtee failed to turn on their body cameras. Protests in Louisville have been prompted in part by the death of Breonna Taylor, who was killed after police executed a no-knock warrant on her home in the middle of the night.

“This type of institutional failure will not be tolerated,” Louisville Mayor Greg Fischer said on Monday.

Also in Louisville, an officer who was caught on camera firing pepper balls at a local TV news crew on Saturday has been reassigned pending an investigation.

“Officers do have orders not to fire pepper balls at media,” said Assistant Police Chief Lavita Chavous Monday, as she asked the public for understanding over the media being hit, saying when “protesters are doing something unlawful or something they are not supposed to do it’s sometimes an unintended consequence when we fire the pepper balls into the crowd.”

In Denver, Colorado, Officer Thomas McClay was been reassigned to desk duty after posting a picture of himself and two colleagues in riot gear with the caption “let’s start a riot.” An internal affairs investigation of the incident has been ordered.

And an investigation into San Jose police officer Jared Yuen has begun after video emerged of the officer swearing at protesters. He was later identified as the officer who shot a rubber bullet at a peaceful protester.