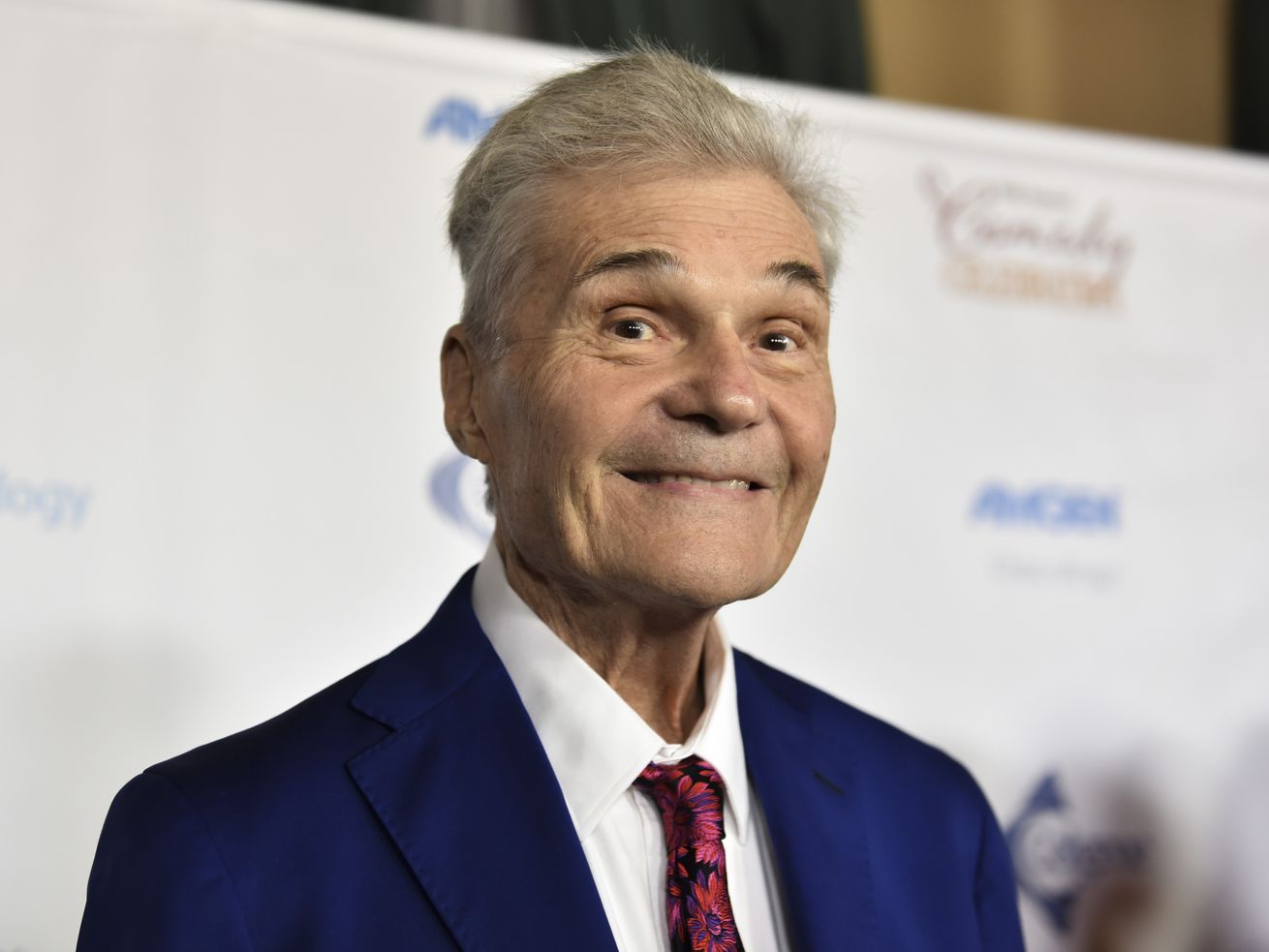 Fred Willard in November 2017. The prolific comic actor died on May 16, 2020. | Rodin Eckenroth/WireImage

The prolific comedy actor died on May 16.

For the last 50 years or so, you could hardly turn on a TV without seeing or hearing Fred Willard, the beloved comic actor who died at age 86 on May 16. Reading his resume is like seeing the entirety of American comedy TV flash before your eyes.

Few people can boast that they’ve been on both Get Smart and Kim Possible; Love, American Style and Modern Family; Murphy Brown and Review; The Simpsons and Roseanne; Ally McBeal and Sister, Sister.

And Willard made memorable appearances on scores of late night comedy shows, including both the Johnny Carson and Jay Leno versions of The Tonight Show. He portrayed Deep Throat on the very first episode of Drunk History. He played long-running recurring characters on shows as different as Everybody Loves Raymond, King of the Hill, Mad About You, and Betsy’s Kindergarten Adventures. He hosted a short-lived but awesome-sounding show called Fred Willard’s American Festivals, in which he visited events including the World’s Championship Duck Calling Contest in Stuttgart, Arkansas, and the longest-running Renaissance Faire in the US.

Willard didn’t just stay on the small screen, either. He is probably best-known for appearing as part of the regular ensemble in Christopher Guest’s beloved mockumentaries, like Best In Show, Waiting for Guffman, For Your Consideration, Mascots, and A Mighty Wind, as well as This is Spinal Tap (which Guest co-wrote but did not direct). The actor’s also been remembered for playing Ed Harken, the harried station manager in the Anchorman movies, and he’s been a nearly ubiquitous presence in dozens more films over the past few decades.

Willard’s final role is in Space Force, the new sitcom from The Office creator Greg Daniels, set to premiere on Netflix May 29. Willard plays Steve Carell’s character’s addled father, and though he’s visibly frail in the role, he’s very funny nonetheless. In a strange twist, Willard also had a role in the pilot for another show called Space Force, way back in 1978 — a pilot that was so bad it never got picked up.

In some ways, Willard’s best work was done in these “bad” shows and movies — because even if you weren’t laughing at the comedy you were watching, Fred Willard popping up on screen was a good sign that you’d get at least a few laughs shortly.

In part, this is because Willard was talented both as an improviser and an actor. Often he played a kind of bewildered, charming, and sometimes accidentally brilliant character, one who rarely took center stage, but was always unforgettable. Saturday, his friends and collaborators also remembered him as generous, kind, and hilarious. “Fred Willard was the funniest person that I’ve ever worked with,” Steve Carell tweeted following the news of Willard’s death. “He was a sweet, wonderful man.”

It’s impossible to definitively say what Willard’s “best” performances were, or to track down which of his roles most defined his career, or even which were most significant. But if you’re looking to celebrate Willard’s immeasurable contributions to comedy, and to the lives of those who loved watching him, here are five good places to start.

Ace Trucking Company on The Tonight Show with Johnny Carson (1974)

In the late 1960s, Willard formed a comedy troupe with four others: George Memmoli, Michael Mislove, Bill Saluga, and Patti Deutsch. (Memmoli was eventually replaced by Paul Zegler.) They called themselves the “Ace Trucking Company” and performed sketch comedy and improvised routines, both in live shows and on variety shows including The Mike Douglas Show, The Dick Cavett Show, and This Is Tom Jones.

Between April 1969 and May 1975, they appeared 35 times on The Tonight Show with Johnny Carson. The group was groundbreaking: Sketch comedy wasn’t yet a fixture of TV — Saturday Night Live wouldn’t premiere until 1975 — but was also very funny. In this sketch from Johnny Carson’s show, Willard plays the owner of a burger joint called “Danny’s on the Turnpike,” which he’s trying to turn into a high-end nightclub with its own variety show, despite a distinct lack of customers.

How to watch it: You can watch the full “Danny’s on the Turnpike” sketch above. Other Ace Trucking Company sketches are floating around the Internet as well.

Before joining the cast of Waiting for Guffman, Willard had collaborated with Christopher Guest before, in a short but memorable role as the hapless Lt. Robert Hookstratten in the 1984 rock mockumentary This is Spinal Tap, which Guest co-wrote with director Rob Reiner and co-stars Michael McKean and Harry Shearer.

Years later, when Guest wanted to make another mockumentary — this time about a plucky but doomed community theater troupe in Blaine, Missouri — he called Willard and asked him to be part of it.

Willard played travel agent Ron Albertson, who, with his wife Sheila (Catherine O’Hara), harbors aspirations toward greatness on the stage and screen, despite plainly being terrible. The film was largely improvised based on a story by Guest and Eugene Levy, and Willard’s indelible performance is a large part of what makes it so great. In this clip, Ron and Sheila audition for a role in the theater troupe’s production; you can listen to Willard talk about it here. Willard would go on to star in four more of Guest’s films.

How to watch it: Waiting for Guffman is streaming for free (with ads) on Vudu and available to digitally rent or purchase on iTunes, Amazon, YouTube, Vudu, and Google Play.

In 2008, Willard became the first live human being to ever appear in a Pixar animated film. He played Shelby Forthright, the CEO of the Buy ‘n’ Large Corporation, in WALL-E. Forthright (whose name belies the fact that he’s anything but forthright) appears on screens to encourage the residents of Earth to buy from the Buy ‘n’ Large Corporation and to enter space after the planet has become so littered in rubbish that it needs to be cleaned up; later we watch him give a more ominous pre-taped speech about the true state of things.

In an interview, Willard said he guessed he had been cast in the role because he could play someone who was “so self-unaware.”

“I guess I look like the perfect foolish person to be in charge of the entire Earth,” he chuckles.

How to watch it: WALL-E is streaming on Disney+ and available to digitally rent and stream on iTunes, Amazon, YouTube, Vudu, and Google Play.

On a show with many, many memorable secondary characters and a vibrantly funny main ensemble cast, Fred Willard’s role as Phil Dunphy’s father Frank on the sitcom Modern Family is still a standout. He’s goofy, funny, and kind, and it’s easy to see how Phil became the kind of father he is by watching Frank.

But it was also a stroke of brilliance to cast Willard in the role — by the time he was cast in 2009, he was a familiar face to anyone who’d watched TV comedy in the last 40 years, making him feel like a fatherly figure, both literally and for comedy more broadly. And he brought along with him all of the characteristics that mark Fred Willard’s performances — sweet silliness, cheerful doofiness, and the kind of familiarity that you want from a grandpa. In the clip above, he comforts Phil after the bachelor party Phil planned for him goes awry, and it’s emblematic of the sensibility Willard brought to the show.

How to watch it: Modern Family is streaming on the ABC website and on Hulu. Individual episodes are also available to digitally rent or purchase on iTunes, Amazon, YouTube, Vudu, and Google Play.

The Trump administration’s announcement of the formation of a “space force” in 2018 felt like comedy gold, at least for the hosts of late night TV shows. The name alone sounds more like the name of a sitcom than a branch of the United States military — and, it was, in a very short-lived, not-very-good pilot for a TV show that never got picked up in 1978.

Willard was among the stars of the show, and helped skewer the announcement. Jimmy Kimmel called up Willard, who appeared on screen in uniform and declared the news to be great. “President Trump is going to make outer space great again!” he said. “We are building a big beautiful space wall, and those filthy Neptunians are gonna pay for it!”

Later, he calls Kimmel a “sensitive little star-flake” and says they’ll “teach these aliens a lesson they will never forget”: that the US means “space business.”

The performance is typical Willard; he’s playing along as a clueless but well-meaning guy. And it’s got just a hint of barbed sarcasm to boot.

How to watch it: A very low-fi version of Space Force, the 1978 TV pilot, is on YouTube. Space Force, in which Willard appears as Steve Carell’s father, premieres on Netflix May 29.