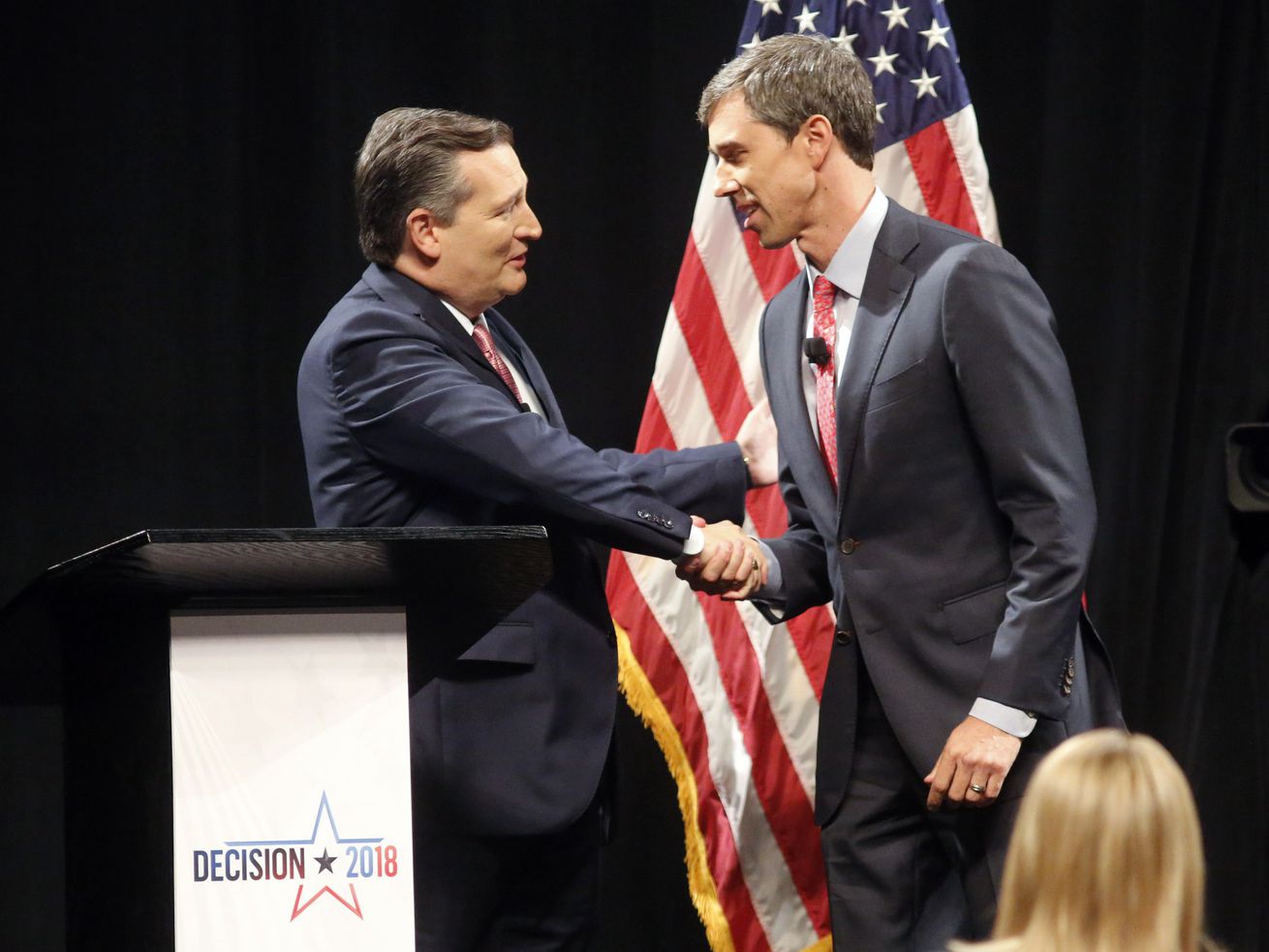 Cruz tried to define O’Rourke as a radical in their first debate for the Senate race in Texas. O’Rourke seemed unfazed.

Sen. Ted Cruz (R-TX) faced his Democratic challenger Rep. Beto O’Rourke in the first of a series of three debates Friday night. The discussion showed just how stark of a contrast the choices will be for Texas voters in November.

In Cruz, who is running for his first reelection and had his tour of national politics as a presidential hopeful, spent the debate defending his record against gun control, dedication to repealing Obamacare, and stance against giving young unauthorized immigrants a path to citizenship.

O’Rourke, an unapologetically progressive Democrat who called for Medicaid expansion, responded to Cruz by arguing for an assault weapons ban, pushing for universal pre-K, and decrying the Republican tax cuts.

O’Rourke’s rise has been a surprise for Texas Republicans. In two separate polls this past week, O’Rourke has been 9 points behind Cruz and 2 points ahead of him. Both are surprisingly close for a race that’s been comfortably handed to Republicans for the past 30-odd years. On Friday, Cook Political Report changed the race’s partisan rating from “Lean Republican” to a “toss-up.”

Here are the key moments from the debate.

O’Rourke made it clear from the beginning that he is speaking to people of color in Texas. Whether speaking directly about police brutality, gun control, marijuana legalization, the opioid crisis, or responding to his own past arrest for driving drunk, O’Rourke demonstrated that racial injustice is among his biggest priorities.

Here’s O’Rourke on a question about the recent shooting of Botham Jean, a black man who was killed by an off-duty police officer in his own home in Dallas earlier this month:

Here’s O’Rourke again, when asked about his arrest when driving drunk:

Though, driving drunk, which I did, is a terrible mistake for which there is no excuse or justification or defense. I will not try to provide one. I can only tell you that I was able to have a second chance in my life. …

What I do know is that as a white man in this country, there is a privilege I enjoy that many African-American men and women do not. They do not have that second chance. They are forced to check the box on an employment application form that makes it harder for them to get a job. They are ineligible for the Pell Grants that would allow them to attend any institution in this area. Their choices are narrowed.

And here’s O’Rourke when asked about his support for legalizing marijuana:

Another old woman with fibromyalgia who is not able to use medicinal cannabis because it is against the law. Another African-American man because more likely than not, that is who will be arrested for possession of marijuana to rot behind bars instead of doing — of enjoying his freedom. Yes, I want to end the war on drugs and want to end the prohibition on marijuana.

In contrast, Cruz was asked directly, “Do you agree that police violence against unarmed African-Americans is a problem and if so, how would you fix it?”

I believe everyone right’s should be protected regardless of your race or ethnicity. I’ve been to too many police funerals. I was here in Dallas when five police officers were gunned down because of irresponsible and hateful rhetoric.

By default, being a Democrat mounting a competitive bid in Texas makes O’Rourke a unique candidate. But O’Rourke wanted Friday night’s debate viewers to walk away knowing that he has spent the last year traveling to every single Texas county.

O’Rourke’s debate performance relied heavily on personal stories of people he has met around the state. He mentioned that he’s been to all 254 counties as many times as he could — which was also the message of his first campaign ad, stitched together with iPhone footage of his travels.

There was also a flip side to O’Rourke message; he said that Cruz isn’t present in the state:

Within months of being sworn to service, your senator, Ted Cruz was not in Texas. He was in Iowa. He visited every single one of the 99 counties of Iowa. He went to the Republican presidential primary states instead of being here. He shut down your government. For 16 days in 2013. Too many people were getting too much health care in the United States of America.

Among O’Rourke’s biggest obstacles in this race is that Texas is a big state, and despite his having won the hearts of liberals across the country through countless features in the national media, voters in Texas still have to make up their mind on him.

Interestingly, Cruz, who gained a national presence for his conservative firebrand theatrics, only to lose to Trump, has also had to play more inside the state. But, unlike O’Rourke, voters know what they think of Cruz.

Cruz is framing Beto O’Rourke as a radical leftist

From the beginning, Cruz’s campaign line has been that O’Rourke is too far to the left for Texas. The sentiment was on full display Friday night, when Cruz made a point to call O’Rourke more radical than Sen. Elizabeth Warren (D-MA), and more to the left than Sen. Bernie Sanders (I-VT) — the two most progressive sitting senators. Here is Cruz, when asked why he thinks he represents Texas values:

The hard left is energized, angry, many of them are filled with hatred. We are seeing tens of millions of dollars flowing from all over the country to congressman O’Rourke’s campaign.

As he takes extreme left-wing positions, positions further to the left of Elizabeth Warren or Bernie Sanders, he gets millions of dollars. For example, Congressman O’Rourke has said he is “Open to abolishing ICE.” Abolishing the Immigration Customs and Enforcement agency. His words. Nancy Pelosi has never said that. Congressman O’Rourke has said he would vote now today to impeach President Trump. Right now. Here. Today. Bernie Sanders has never said that.

Cruz repeatedly used the words “radical” and “extreme” to define O’Rourke — once comparing his opponent to Hillary Clinton when talking about judicial nominees.

“The justices that Congressman O’Rourke would insist upon, like Hillary Clinton, are justices that undermine and effectively write the second amendment out of the Constitution,” Cruz said. “Those are radical views.”

This line of attack has long been expected of Cruz, according to James Henson, the director of the Texas Politics Project, who spoke to Vox earlier this week. Why? O’Rourke still has a relatively low name recognition with Republicans in the state, and as of June, only 42 percent of Republicans expressed an unfavorable opinion of him — a relatively low number compared to most Democrats who have run statewide.

“The attack ads are not about driving O’Rourke’s positives down, but defining him for Republicans who don’t know much about him,” Henson said.

In other words, Cruz wants Republicans to be scared of O’Rourke and has made the calculation that defining him as a radical socialist will do just that.

Even when asked to compliment O’Rourke, Cruz managed to hit his Democratic opponent one more time.