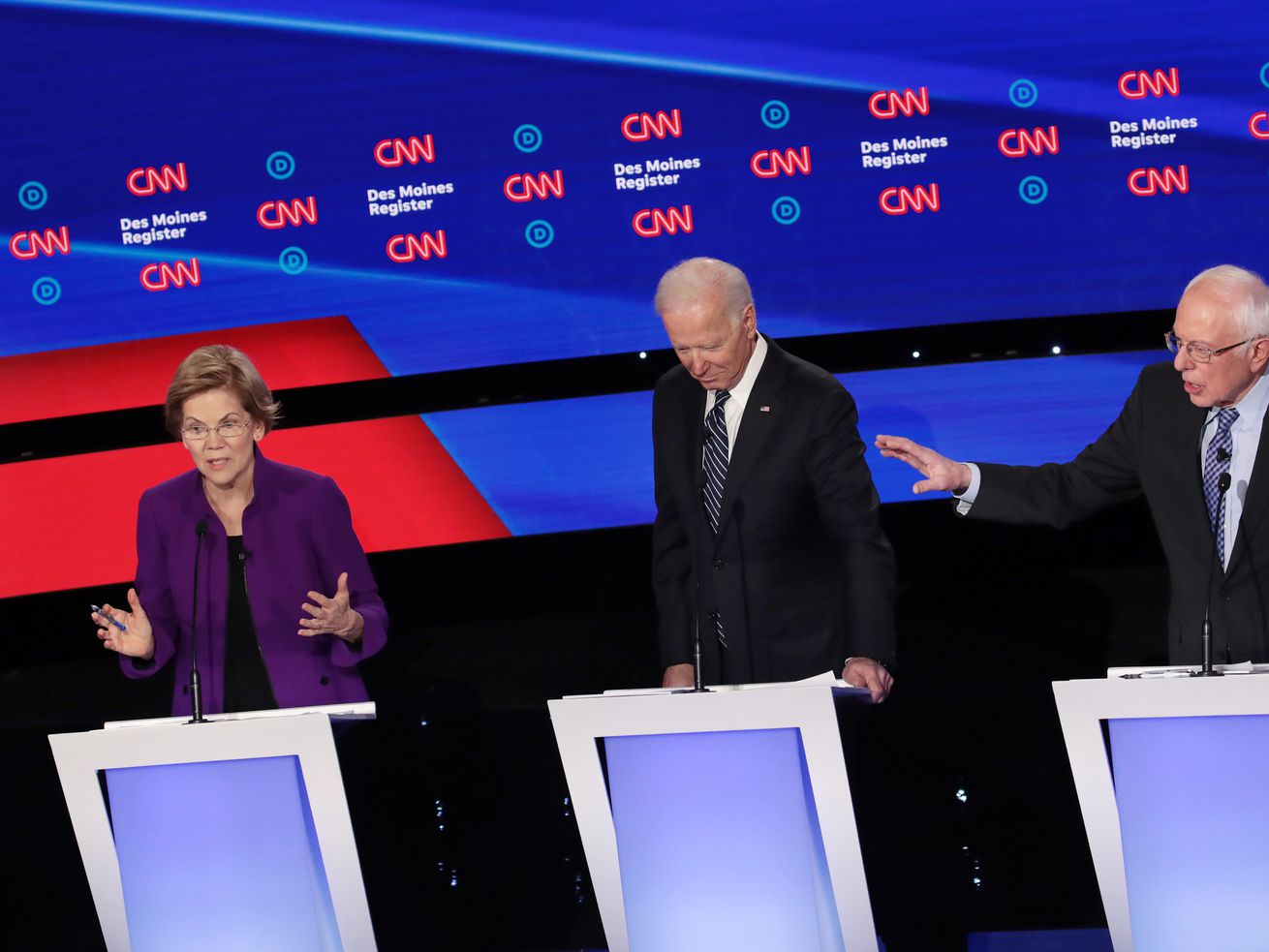 The conflict is opening old wounds from the last election.

Then the snakes came out.

The immediate cause of the conflict was a CNN story, published Monday, in which unnamed sources said that in 2018, Sanders had told Warren that a woman couldn’t win the presidency in 2020. Warren soon confirmed the account; Sanders denied it.

Both candidates took the high road during Tuesday’s debate, refocusing attention on their campaign’s core messages. But after the debate, Warren appeared to refuse to shake Sanders’s hand, fueling further speculation about a rift between the two. Ordinary voters took up the conflict, with Sanders supporters on Twitter filling Warren’s mentions with snake emojis, implying that she’s untrustworthy and evil. On Wednesday, #NeverWarren was trending. So was #WarrenIsASnake.

To many people, the conflict had echoes of the 2016 primary contest, when supporters of Sanders and Hillary Clinton clashed in often-bitter online feuds. During that campaign, Clinton supporters charged some Sanders supporters — and, sometimes, Sanders himself — with sexism, while Sanders supporters saw the allegations as bad-faith defenses of a flawed candidate.

Many of the same dynamics are at work today. But some say the conflict threatens to obscure a necessary conversation about how sexism works in American politics and the pressures any female presidential candidate will have to face.

Misogyny likely did play a role in Clinton’s 2016 loss to Trump, and it plays a role in how female candidates are perceived today, Farida Jalalzai, a political science professor who studies women leaders, told Vox. A productive conversation around gender would have to include “an acknowledgment that there has been this association of the American presidency with masculinity,” she said — and a reckoning with the effect of that association on candidates of all genders, not just women.

Warren and Sanders are in conflict for the first time in this campaign. It’s spilling over onto social media.

Some of the intensity of the current conflict comes from the fact that Sanders and Warren are longtime friends who had reportedly agreed not to attack each other on the campaign trail.

Things started to change this weekend, when Politico reported that the Sanders campaign was using a volunteer script calling Warren’s supporters “highly-educated, more affluent people who are going to show up and vote Democratic no matter what.” Warren responded that she was “disappointed to hear that Bernie is sending his volunteers out to trash me,” as Vox’s Ella Nilsen reports.

But the conflict got much more heated when allegations of sexism came into play. At the debate on Tuesday night, Sanders again denied that he had told Warren a woman couldn’t win in 2020.

“Hillary Clinton won the popular vote by 3 million votes,” he said. “How could anybody in a million years not believe that a woman could become president of the United States?”

Ultimately, he said, “the only way we beat Trump is by a campaign of energy and excitement and a campaign that has, by far, the largest voter turnout in the history of this country.”

Warren, similarly, repudiated the notion that a woman can’t win, while also making an argument for herself as the most electable person on stage: “We need a candidate who will excite all parts of the Democratic Party, bring everyone in, and give everyone a Democrat to believe in. That’s my plan, and that is why I’m going to win.”

It was by no means a negative exchange. But when the two met on stage after the debate was over, Warren didn’t shake Sanders’s outstretched hand, and the two seemed to have a heated conversation.

By early Wednesday morning, Twitter users were replying to Warren’s tweets with snake emojis, presumably implying that she had double-crossed Sanders by violating their reported non-aggression pact. As Vox’s Constance Grady explains, the use of the snake emoji has its roots in celebrity fandom culture and is “designed to signal your overwhelming loathing of a celebrity who you believe to be sneaky, slimy, and manipulative.”

The snakes weren’t the only criticism. Others, like documentarian Michael Moore, explicitly accused Warren of back-stabbing.

Elizabeth & Bernie have appeared in my films. I love them both. Why Elizabeth chose to stick a knife in Bernie’s back is beyond me. At a time when job #1 is to remove Trump, how did this help? My new RUMBLE podcast “The Sad Downfall of Elizabeth Warren.” https://t.co/uFwOFNka9U

The over-the-top language — likening criticism of an opponent to a knife in the back — was familiar. When powerful men have been accused of sexual misconduct in recent years, they and others have often complained that they’ve been “killed” or that their “lives are over” — even if, as in the case of Supreme Court Justice Brett Kavanaugh, they’ve faced no career consequences whatsoever.

The situation between Warren and Sanders is very different from those that have arisen as part of the Me Too movement. But the exaggerated language around a woman’s decision to speak out is strikingly similar.

The controversy has echoes of 2016

The conflict didn’t end when Clinton won the nomination — or when she lost the election. Among Sanders supporters, “Bernie would’ve won” became, as Jezebel’s Ashley Reese puts it, “half cynical meme, half sincere lament.” Meanwhile, resentment among former Clinton supporters continued to fester, so much so that former Clinton staffers were still complaining to the media about Sanders (and finding an audience for their complaints) in 2019.

For many, the prospect of a repeat of all this is exhausting, which is why some supporters of both candidates were calling for an end to the Twitter war on Wednesday and urging their fellow progressives to support whichever candidate becomes the nominee.

The conflict is a sign of larger issues in American politics

The desire for the two camps to end hostilities notwithstanding, there are real systemic issues at play.

On the one hand, the idea that Sanders supporters were all white, male “bros” was always a stereotype, not reality. As Dara Lind explained at Vox, what separated Clinton fans from Bernie supporters in 2016 was primarily age, not gender. And this time around, young women actually make up a bigger share of Sanders’s base than young men, as Marie Solis noted at Vice last year.

But that doesn’t mean that Sanders’s female opponents — Clinton then, Warren now — don’t face sexism when they run against a man.

On social media, critics of Warren often say things like, “you just can’t trust her, she’s a liar,” or “she’s opportunistic,” Jalalzai said — criticisms similar to those lobbed at Clinton in 2016.

“There is a tendency to portray especially strong women candidates as overly ambitious, as willing to do anything at all costs to win,” Jalalzai explained.

And while the snake emoji may have gotten its start with Kim Kardashian stans, the snake image is similar, Jalalzai said, to images used to criticize other female world leaders as disloyal or two-faced.

And whatever happened in the 2018 meeting, it’s no surprise that Warren has been criticized for alleging Sanders said something that could be interpreted as sexist.

“When women call sexism out it often falls on deaf ears, or people get really angry with the notion,” Jalalzai said.

The response by both candidates to the conflict, at least as of Tuesday night, was to try to defuse the situation and assert that of course a woman can be elected president. But there’s growing evidence that sexism against Clinton played some role in voters’ choices in the 2016 election, even if it wasn’t the whole story, Jalalzai said. “To pretend that that’s not the case is sort of unproductive.”

Instead, the current conflict is an opportunity for a real examination of how gender stereotypes affect all candidates, not just women.

“How much is Bernie given a pass because, whether or not people acknowledge it, there’s something about him that seems more presidential because he’s a man?” Jalalzai said. As for former Vice President Joe Biden, “What makes someone like him the obvious frontrunner? Part of it, I would assume, is because he’s a man and because he’s white.”

Gender also impacts how Americans see our current president. “When President Trump goes down in history as the worst American president we’ve ever had, no one is going to say that that means that men should no longer be president,” Jalalzai said. “Women presidents have been subjected to that in other countries.”

In the United States, we’re not even at the point yet where a female president can be criticized for her performance. But we are at a point where multiple female candidates are close to the highest office in the country, even if they don’t ultimately win.

And that’s an opportunity to have an open conversation about our country’s enduring biases about who is “presidential” — and begin to dismantle them.