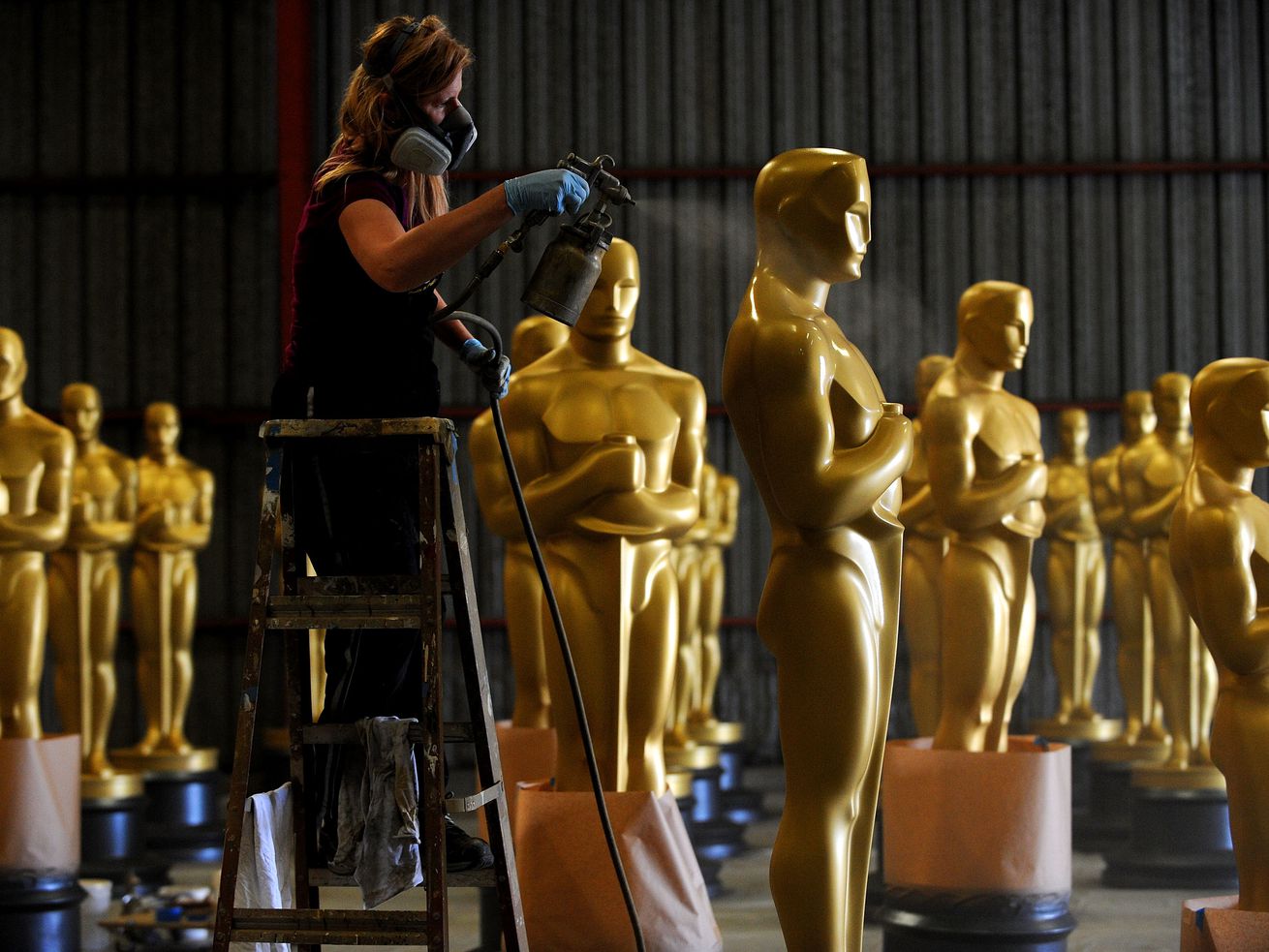 The Oscars were once again notably non-diverse. | Kristian Dowling/Getty Images

The Oscars were almost so white all over again — and they mostly ignored films about women and queer people, too.

The 2020 Academy Awards have avoided another Oscars So White — a scenario that happened in both 2015 and 2016, when no performers of color were nominated for any acting awards, prompting structural overhauls meant to diversify the Academy’s voting membership. But only by the skin of their teeth.

The one performer of color nominated across 20 possible spots in 2020 is Best Actress nominee Cynthia Erivo, who played Harriet Tubman in the film Harriet. Nominating just one performer of color and then nominating her for playing Harriet Tubman feels a little like a bad joke from the old showbiz satire cartoon The Critic, but sometimes the Oscars exceed expectations for how bizarre they can get.

It’s not as if there were few other options for Academy members to turn to! Performers of color who’ve received major nominations at precursor awards like the Golden Globes, Critics’ Choice Awards, and Screen Actors Guild Awards include Jennifer Lopez of Hustlers (nominated for all three), Awkwafina of The Farewell (a Golden Globe winner), Lupita Nyong’o of Us (winner of the most lead actress awards from critics organizations this awards season), Eddie Murphy of Dolemite Is My Name, Song Kang-ho of Parasite, Zhao Shuzhen of The Farewell, and Jamie Foxx of Just Mercy.

Again, those are just the performers who earned major nominations at one of the Oscar precursors. In addition to those names, there is a wealth of amazing performers of color who weren’t really considered, including most of the cast of Parasite, which received nominations in many other categories.

And, the Academy says with a twinkle in its eye, that’s not all. Once again, the Best Director category is composed of five men (though Parasite’s Bong Joon-ho is a director of color), as are several of the technical categories. That’s particularly rich in a year with films directed by women scoring in other major categories, namely Greta Gerwig’s Little Women (nominated for Best Picture, Best Adapted Screenplay, and two acting categories — normally a combination that would yield a directing nomination too) and Marielle Heller’s A Beautiful Day in the Neighborhood (nominated for Best Supporting Actor).

Look beyond those two and you’ll find other people who were snubbed but received nominations at previous awards shows, especially Lulu Wang’s The Farewell and Lorene Scafaria’s Hustlers.

And in a year filled with many brilliant examples of overtly queer cinema, the only film to get any real traction was Pain and Glory, a poignant drama about an aging gay director from auteur Pedro Almodovar. (Not even a cinematography nomination for the lesbian romance Portrait of a Lady on Fire? For shame, Academy!)

The measures taken to diversify the Academy’s voting membership were supposed to avoid scenarios like this, but this time they just … didn’t. And we haven’t even gotten to the extremely white dude-centric Best Picture lineup, in which every movie but Parasite and Little Women has a white guy protagonist. (I should note here that nominee Jojo Rabbit is about white characters but was directed by Taika Waititi, who is of Maori descent.)

Why did that happen? It’s impossible to say for sure, since Academy voting is so secretive. (For all we know, slots six through 10 in every acting category — the people who just missed nominations — are filled with performers of color.) But here are some best guesses.

But then you get to Ford v Ferrari and 1917 and Marriage Story and Joker, and no matter what you think about all of those films, they’re soaking up a big number of the Oscar nominations. (Like, Joker somehow received 11 nominations. I’m hissing like an angry cat!)

All these movies are critically acclaimed — though the most-nominated Joker has the lowest level of acclaim — so it’s not as if the Academy went out on a limb in celebrating movies about white men. Indeed, if movie critics had nominated their top nine movies of 2019, their choices would have overlapped substantially with the 2020 Best Picture category, at least if top 10 lists are any indication.

There were just a lot of critically acclaimed movies about white guys last year. And many of them were made by white guys. If you think of movie reviews as the first line of defense against unworthy movies being nominated for Oscars — in that a Joker can occasionally slip through, but it’s unlikely that more than a handful of poorly reviewed movies will — then critics told Oscar voters that a lot of good movies about white dudes were made in 2019.

That probably says something about the lack of diversity among critics, which we could dig into further, but let’s move on to where things really started to fall apart.

If you go back to the long list I wrote above of performers of color nominated for earlier awards, there’s only one who was nominated at every early precursor that usually translates to an Oscar nomination, but who still missed at the Oscars: Jennifer Lopez. (Like Lopez, Cynthia Erivo was also nominated at the Golden Globes, the SAGs, and the Critics Choice Awards, but she received an Oscar nomination, while Lopez did not.)

And that’s before we get in to the British Film and Television Academy and the BAFTAs, which nominated no performers of color, in part by going out of its way to nominate Margot Robbie twice in the same category. (The Oscars have a rule against this sort of doubling up by acting nominees.)

A lot of Oscar voters are just looking for a list to refer to of the best movies of the year, so they don’t have to watch every single screener they receive. Precursor awards have traditionally provided that list, narrowing the field of dozens of movies that received major critical attention to 15 to 20 that received major critical attention and love from an earlier precursor group.

If you’re looking for the biggest hurdle to making the Oscar nominations more diverse, I would argue it’s right here, at this stage of the process, where the question “What were the best movies of the year?” is still asked of a handful of groups whose memberships are as old and white as the Academy used to be. The Golden Globes have an even worse record of nominating women for Best Director than the Academy, for instance.

You can even look past questions of representation to, say, diversity of genre. Consider the 2019 film Midsommar (another movie made by a white guy, just fyi): It’s one of my favorite movies ever made, but because it’s a horror film, it’s unlikely to make top film lists determined by these groups of older, more artistically conservative voters.

But even before the precursors pop up, the conversation is set by the people who make their living off predicting the Oscars and tend to set the conversation for which movies are “worthy” early on. Many of these folks really are talking to Academy voters and reflecting those voters’ tastes. But there’s also a large community of predictors who glance at movies years before they debut at film festivals or arrive in theaters, movies they have yet to see so much as a trailer for, and say, “That’s an Oscar movie.”

The Irishman is a great movie — but it didn’t have to overcome any hurdles to get nominated because a mob drama starring a legendary white guy actor (Robert De Niro) and directed by one of the greatest filmmakers (Martin Scorsese) was always going to be considered. It was “an Oscar movie” from the second it was announced, and until the Academy can find a way to dislodge this line of thinking, it’s going to be hard to avoid situations where the lineups are as non-diverse as the 2020 nominee list is. And a big part of why the “That’s an Oscar movie” narrative takes hold is because of predictors who artificially winnow the field before anybody has seen the movies.

For more on this, read Vanity Fair’s Mark Harris, who called the scenario that unfolded at the 2020 Oscar nominations in November.

3) I don’t know if you’ve noticed, but Hollywood makes a lot of movies about straight white men

The Oscars So White conversation has always been an attempt to push back against a larger systemic problem by pointing to one of its most obvious and glaring oversights. If you hear, “Only one performer of color was nominated for an Oscar in 2020” and respond with, “Well, what other performers of color should have been nominated?” as though that ends the discussion, you’re highlighting the real problem. And no matter how many deserving performers of color I list out, they’re still going to be the exception, not the rule, within the larger picture of all movies made in America.

At the end of the day, the idea that the Oscar nominee slate isn’t particularly diverse is absolutely a problem. But it pales in comparison to how non-diverse Hollywood is as a whole. That’s changing (more big movies were directed by women in 2019 than ever before, for example), but at a glacial pace. And as long as that’s true, the 15 to 20 movies that the Oscars seriously consider are more likely than not to be about — and made by — straight white men.

So, see? The whole system is broken! Glad we figured that out.