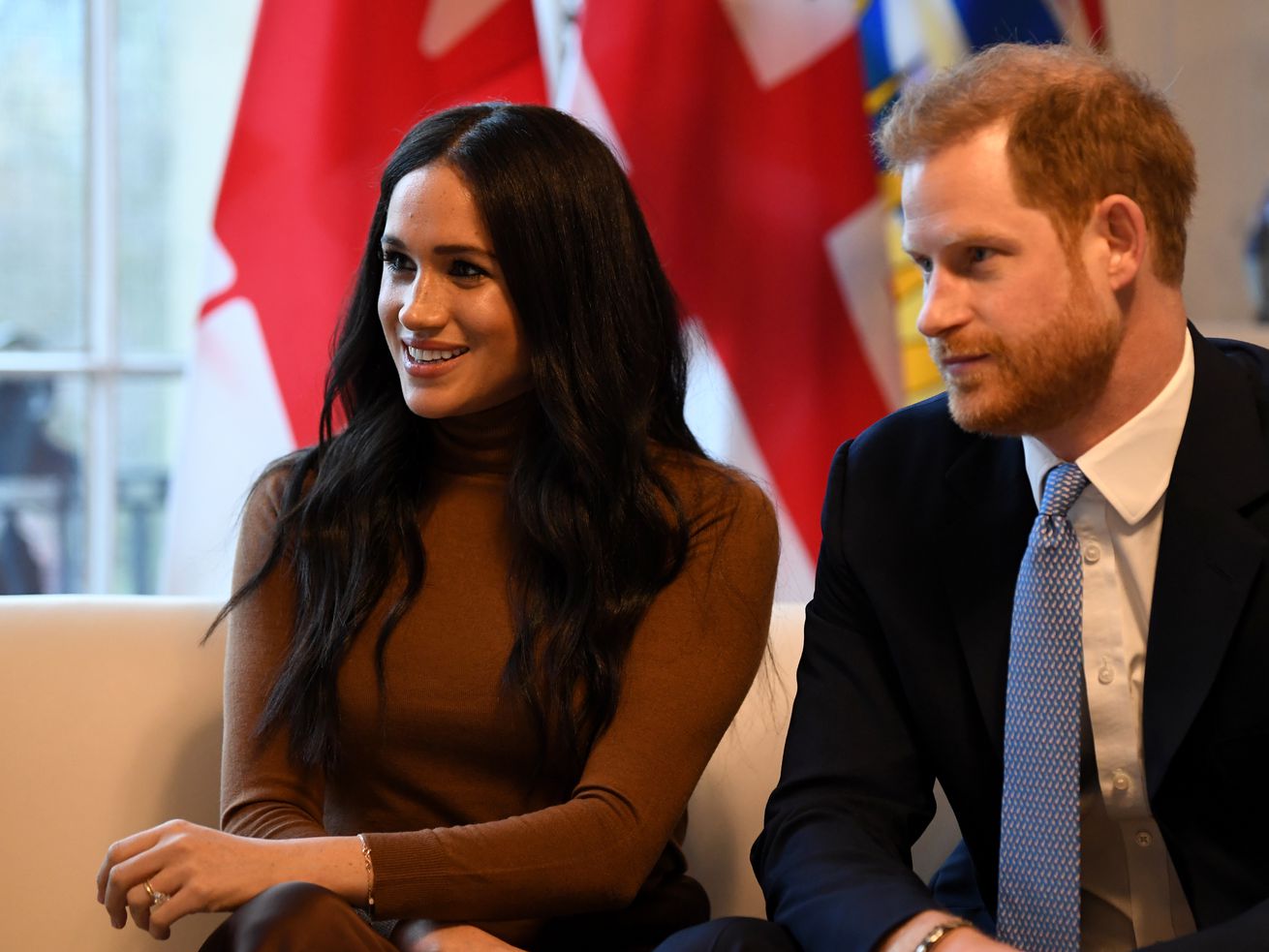 Where will Harry and Meghan live? What even is a “senior royal”?

Prince Harry and Meghan Markle, the Duke and Duchess of Sussex, flew in the face of royal tradition on January 8, announcing they will formally step back from their roles as senior members of the royal family and work to become financially independent.

The announcement, which people have started to call “Megxit,” has drawn both backlash — including from Buckingham Palace and London’s Madame Tussauds wax museum — and praise for the couple. On January 13, the royal family convened at the queen’s Sandringham Estate for a family summit to discuss the Sussexes’ future plans.

In a statement to the press, the Queen agreed that Harry and Meghan will undergo a transition period as they move into their new roles: “Although we would have preferred them to remain full-time working Members of the Royal Family, we respect and understand their wish to live a more independent life as a family while remaining a valued part of my family.”

It was reported on January 10 that Meghan flew back to Canada while Harry remained in Britain to have talks with his family. (Meghan called in from Canada for the family summit.)

Before the summit, Prince William and Harry issued a rare joint statement condemning a story in the Times. The report, citing a source close to the Sussexes, claimed that Harry and Meghan are stepping away from their royal roles after two years of “constantly being told their place” by William, and used the word “bullying” to describe William’s attitude.

A joint statement from the spokespeople of Prince William and Prince Harry: pic.twitter.com/H8hqYCHirK

In the midst of Megxit, royal fanatics and casual onlookers alike have congregated online to analyze the couple’s decision and try to envision their life away from the throne. However, this series of unprecedented events has led to a lot of questions.

How does one exactly become a senior royal? Does financial independence mean Harry and Meghan will have to actually work? In that case, will Meghan restart her lifestyle blog the Tig and possibly advise on the next season of The Crown? Will Harry be, like, a trophy husband?

First time I’ve ever seen someone quit their family, saying it’s to spend more time with their jobs. https://t.co/iFBZokRXhX

In light of the queen’s statement, Harry and Meghan appear to have achieved what they set out to do: distance themselves from the responsibilities of the throne. They seem adamant on carving out a more insulated life with baby Archie, which involves splitting time between the UK and North America.

What does the term “senior royal” actually mean?

Most royal experts agree that the phrase “senior royal” is a nebulous term. It generally refers to adult royals who are closest to the throne — children of the sovereign (Queen Elizabeth) or the heir (Charles, Prince of Wales), Marlene Koenig, an expert on British royalty who runs the blog Royal Musings, wrote to me in an email. Harry is sixth in line to the throne, behind his father Prince Charles, his brother Prince William, and William’s three children.

Royal Central, which calls itself an independent royal news site, defines a senior member of the royal family as anyone who is the monarch, a counselor of state, or a counselor’s spouse. A counselor of state, according to the blog, is a high-ranking member of the royal family who carries out the duties of the queen in her absence. Under this classification, Royal Central noted that there are nine senior members: the queen, her spouse, her sons (and their spouses), and her grandchildren (and their spouses).

There are also junior members of the family, who have the title “Royal Highness” attached to their names but do not carry out public duties for the crown.

How did Harry and Meghan make money as senior royals?

Harry and Meghan created a separate royal website (which ends with a dot-com domain, not a dot-uk) that details the changes in funding they’ll receive in their new positions as non-working royals. For those unfamiliar with how royal finances work, it can sound pretty complicated.

As senior royals, Harry and Meghan disclosed that they have two streams of funding: 5 percent from something called the Sovereign Grant and 95 percent from Prince Charles’s (Harry’s father) private estate, the Duchy of Cornwall. Currently, the couple is prohibited from earning any type of income, and they don’t benefit from their charitable work.

The couple said they will no longer receive the Sovereign Grant, which is a fund that supports members of the royal family’s official residences and workspaces. Money for the grant comes from the profits from the Crown Estate, which is basically a public real estate portfolio owned by the queen. The queen annually receives 15 percent of the Crown Estate profits for her use (for example, funding the Sovereign Grant), and the rest goes to the UK Treasury.

So what will “financial independence” mean for them?

By opting out of the Sovereign Grant, the couple appears to be cutting off direct financial ties to Buckingham Palace. Still, they have plenty of other revenue streams, including money from Charles’s estate portfolio.

“Harry inherited half of the approximately £21 million from his mother, which included the divorce settlement [from Prince Charles] and the £5 million from [Princess Diana’s] father after his death,” Koenig said, adding that the money is “probably well-invested.” Meghan, too, likely has her own investments from her work as an actress and lifestyle blogger.

Royals expert Kristen Meinzer told me that she estimates Harry and Meghan have a net worth of about £29 million to £40 million. “As for how they’ll make money going forward, I like to look to the Obamas for inspiration,” she said. “I’m guessing these will be charitable endeavors, media endeavors, and lots of book offers.”

How are Harry and Meghan changing their relationship with the British press?

The royal family has had a tumultuous history with the British tabloids. However, the relationship has always abided by a set of precedents established 40 years ago in the “Royal Rota” system to give British media exclusive access to members of the royal family.

Harry and Meghan will no longer participate in the Royal Rota system and instead elect to “provide access to credible media outlets focused on objective news reporting” to cover certain events.

According to the couple’s site, the system “gives these British media representatives the opportunity to exclusively cover an event, on the understanding that they will share factual material.” The outlets currently part of this pool are the Daily Express, the Daily Mail, the Daily Mirror, the Evening Standard, the Telegraph, the Times, and the Sun. (Interestingly, four out of seven of those outlets are tabloids.) The Royal Rota also requires members of the family to give these publications their unreleased photos simultaneously or ahead of formal publication.

This decision is notable, especially since Harry and Meghan are pursuing legal action against Associated Newspapers, the publisher of the Daily Mail and Mail on Sunday, over alleged misuse of private information, and have accused the Sun and Daily Mirror of phone hacking.

The Royal Rota system typically dictates how official royal events are covered, Kristin Contino, chief reporter at Royal Central, wrote to me in an email. “This is more about trying to control the narrative, which is understandable when they’ve received so much vitriolic press. But at the end of the day, unfortunately, no one can totally control what’s written about them.”

Michelle Stanistreet, secretary of the National Union of Journalists, told the Press Gazette that while the system is not perfect, it’s a necessary check on the royal family, an institution that is publicly funded: “We cannot have a situation where journalists writing about the Duke and Duchess of Sussex can only do so if they have the royal seal of approval.”

Now that Harry and Meghan have left this exclusive circle of communications, they’re likely to rely on their social media and official press team to make formal announcements. It remains to be seen, however, whether harsh tabloid coverage, particularly directed toward Meghan, will abate.

Will the couple have private social media again?

The couple already has their own Instagram account, @sussexroyal, Koenig said. Previously, Harry and Meghan shared the account @kensingtonpalace with William and Kate but created their own after their official split in March. (The two brothers and their spouses previously shared an office in Kensington Palace, but before Archie’s birth, Harry and Meghan decided to form their own household and hire new staffers.)

Meghan and Harry use the @sussexroyal Instagram account to promote their formal arrangements. It’s not a true private social media account, like Princess Eugenie’s Instagram or Princess Beatrice’s Twitter. These princesses are junior royal members and hold jobs beyond working for the crown. It’s possible the couple could develop a stronger online presence now that they’re no longer working royals and under the guidance of Buckingham Palace.

“Stepping down from senior roles will give them more freedom in terms of social media, and I wouldn’t be surprised if we saw Meghan writing blog posts or them being much more open in their communication in a celebrity-style way,” Contino said.

Did Harry and Meghan renounce their titles?

The short answer is no. Harry is still a prince and the Duke of Sussex, and Meghan is still the Duchess of Sussex. While there have been enthusiastic, quasi-jesting calls for Harry and Meghan to renounce these titles and live as commoners, simply “stepping back” from their royal duties isn’t the same thing.

The Duke and Duchess of Sussex aren’t the first high-profile royals to retreat from their roles. In November, Prince Andrew, Queen Elizabeth’s second son, announced he would “step back from public duties for the foreseeable future” after a disastrous BBC interview that addressed his friendship with convicted sex offender Jeffrey Epstein, who died in August. Andrew’s leave, however, seemed to be an attempt to mitigate the backlash he received.

Harry and Meghan’s future appears to be less extreme than the path Edward VIII took. In 1936, Edward abdicated his role as monarch to marry the American socialite Wallis Simpson; Edward’s abdication paved the way for George VI, the reigning Queen Elizabeth’s father, to be king. As the Washington Post reported, the stakes were much higher for Edward than they are for Harry and Meghan.

What will their last name be?

When Harry served in the British army, he went by Harry Wales, in reference to his father, the Prince of Wales. It’s uncertain whether he and Meghan will use this last name. Archie could use Sussex as a last name (William and Kate’s children use Cambridge as their last name in school), but Harry and Meghan have chosen another surname for Archie: Mountbatten-Windsor.

It’s unlikely that Harry and Meghan will ever distance themselves from their royal titles. Contrary to what Lorde sings in “Royals,” Harry and his wife will always be royals because, well, it runs in his blood.

This story has been updated (and will continue to be) with new information about the response from the royal family.

Sign up for The Goods newsletter. Twice a week, we’ll send you the best Goods stories exploring what we buy, why we buy it, and why it matters.