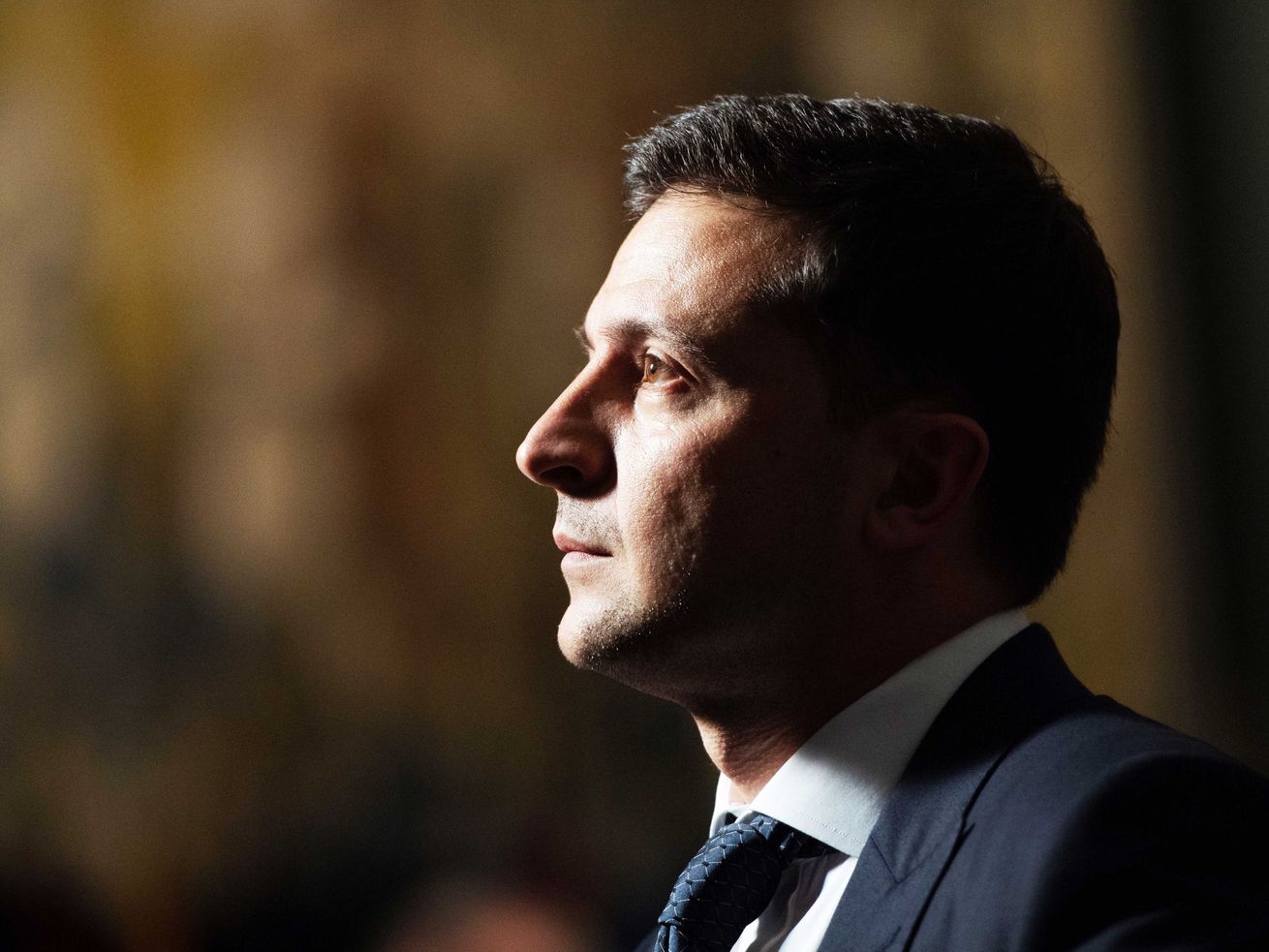 The country has always been at the center of Trump’s scandals.

The transcript summary of President Donald Trump’s call with Ukrainian President Volodymyr Zelensky released on Wednesday makes one thing perfectly clear: Ukraine has replaced Russia as the foreign nation that will most be on Americans’ lips in the weeks ahead.

Trump is embroiled in a crisis about whether he improperly used his position to try to coerce Zelensky into investigating Trump’s 2020 political opponent, former Vice President Joe Biden — perhaps by withholding military aid to the Eastern European country.

That seems possible based on the call summary, which shows Zelensky asking for US-made weaponry to fend off Russia and Trump immediately responding, “I would like you to do us a favor though” — then suggesting Attorney General William Barr get in contact with Ukrainian officials.

On the surface it may seem odd that Ukraine, one of Europe’s poorest countries, has become so central to the latest Trump drama. But the truth is that the country has been involved in Trump scandals since the very beginning.

“Ukraine has certainly been a through line in a number of Trump investigations: the Republican National Committee platform, Russian ambitions, NATO commitments, and now this,” says Andy Wright, a former White House lawyer in the Obama administration.

And that doesn’t even touch on former Trump campaign chair Paul Manafort’s lobbying work on behalf of a previous pro-Russian Ukrainian president or the wild conspiracies on the right that have led some (including, apparently, Trump himself) to believe Hillary Clinton’s infamous email server is currently in Ukraine.

In other words, the Ukraine-Trump connection isn’t new. It’s always been there. We’ve mostly just forgotten because so much has happened that it’s hard to keep track of everything. So here’s a reminder of how Ukraine has played into the various Trump scandals from the very beginning.

Trump has sold out Ukraine to cozy up to Russia

One of the earliest controversies surrounding Trump’s presidential campaign centered on a disappearing section of the Republican Party’s 2016 platform.

Initially, the document had reportedly stated that the party — and thereby Trump, as the party’s official nominee — supported sending lethal aid to Ukraine. That would be an important signal for officials in Kyiv looking for help in their fight against Russia, which invaded the country’s east and south in 2014. Russia is a far more powerful country with more troops and equipment. US assistance, then, is essential to Ukraine’s effort to defend itself against Russia.

But the final version of the GOP platform only said the US would provide “appropriate assistance to the armed forces of Ukraine” in a Trump administration — a major softening of the language.

So what happened? Well, Trump campaign officials quietly worked behind the scenes to change the position, even hosting multiple events during the party’s convention in Cleveland to ensure the GOP wouldn’t back shipping arms that Ukrainians could use against Russians.

Many Republican Party members were concerned by the change in language. “This is another example of Trump being out of step with GOP leadership and the mainstream in a way that shows he would be dangerous for America and the world,” Rachel Hoff, a platform committee member, told the Washington Post at the time.

After entering the White House, Trump continued his warmth toward Russia. Among other things, Trump repeatedly bought Russian President Vladimir Putin’s denials that Russia had interfered in the 2016 election; held meetings with Putin without notetakers, and sided with the Russian president over the US intelligence community during a summit in Helsinki last year.

Oddly, Trump ended up overturning the Obama administration’s ban on selling lethal weapons to Ukraine in 2017. That move allowed the US to sell the country anti-tank missiles and other advanced weapons that would help Ukraine better fight back against Russia, and it ingratiated the Trump administration with many in Ukraine.

Zelensky, who wants to end the war in the country, surely cares deeply about keeping military aid coming from the United States — a fact that Trump could use as leverage if he wanted to.

It seems like forever ago, but it’s worth remembering that the person in charge of Trump’s campaign for a while — Paul Manafort — had important relationships in Ukraine.

Before he joined Trump’s team, Manafort was already well known for his decades of Republican campaign and lobbying work. By around 2004, Manafort sought even grander paydays abroad by advising fantastically rich oligarchs in the former Soviet Union on how to master tumultuous democratic politics. He advised a Russian billionaire, Oleg Deripaska, but eventually his efforts focused on Ukraine — where he landed a hefty contract to advise the country’s pro-Russian political party.

When Manafort got the gig, the Party of Regions and its leader Viktor Yanukovych were unpopular and in the opposition. But over the next few years, Manafort would help orchestrate the party’s return to power and Yanukovych’s 2010 election as president.

Once Yanukovych was in office, Manafort became an enormously influential adviser to the regime — the Atlantic’s Franklin Foer wrote last year that Manafort had “walk-in” privileges, and billed “outrageous amounts” to the Ukrainians while advising on both domestic politics and lobbying in the US.

But it all fell apart in 2014, when Ukrainians took to the streets to force Yanukovych out of power and he fled to Russia. Manafort and Deripaska, meanwhile, had a falling out that ended in a lawsuit, with Deripaska claiming Manafort cheated him of millions. He’d lost his biggest client and had serious cash flow problems, and the FBI looked into his Ukrainian money.

First, Manafort had moved $30 million of his Ukrainian lobbying money from foreign shell companies into the US — but he didn’t disclose this income on his tax forms, pay taxes on it, or fill out legally required disclosures of his foreign accounts. That’s illegal.

Second, Mueller’s team focused on what Manafort did once he lost his Ukrainian income after the country’s president was deposed. They found he tried to conjure up more cash via bank fraud.

Manafort eventually pleaded guilty to a broad “conspiracy against the United States” — in which he admitted unregistered lobbying and money laundering related to the Ukraine work. He received sentences of more than seven years combined in prison.

According to the Washington Post, part of the reason why Trump’s personal lawyer Rudy Giuliani has become so interested in getting close to the Ukrainian government is because he wants to punish those who put Manafort behind bars. It seems Giuliani will continue to deal with Ukranians in an effort to dig up dirt on anti-Trump Democrats and others the administration accuses of being the real colluders with Ukraine.

“I would like you to find out what happened with this whole situation with Ukraine, they say CrowdStrike … I guess you have one of your wealthy people … The server, they say Ukraine has it. There are a lot of things that went on, the whole situation,” he said.

It appears Trump was referring to a long-debunked conspiracy theory that the firm has covered up the fact that Ukraine — not Russia — interfered in the 2016 election.

Give your head a second to stop spinning, and then read on.

CrowdStrike was hired by the Democratic National Committee (DNC) in 2016 to look into who hacked into their networks during the election. The firm determined that it was two Russian groups with Kremlin ties. Case closed, right? Not exactly.

Trump seems to believe — and has often mentioned — that a DNC server with the real information on it has gone missing, and that CrowdStrike (and the FBI) is somehow involved in its disappearance. He brought the issue up during his Helsinki meeting alongside Putin.

But here’s the problem: There is actually no missing physical server associated with the DNC breach to speak of. Instead, the roughly 140 servers — most of them cloud-based — are already out of use.

What’s more, in a 2017 interview with the Associated Press, for example, Trump said CrowdStrike was “Ukraine-based” — even though its headquarters are in California. “I heard it’s owned by a very rich Ukrainian, that’s what I heard,” he continued.

That’s incorrect. The company’s cofounder, the Russian-born US citizen Dmitri Alperovitch, is a senior fellow at the Atlantic Council think tank in Washington, which receives funding from Ukrainian oligarch Victor Pinchuk. But that flimsy connection is a far cry from the firm he started being secretly run by an Eastern European billionaire.

(Disclosure: Before coming to Vox I worked at the Atlantic Council and interacted with Alperovitch on a few cybersecurity-related events and projects.)

CrowdStrike denies any wrongdoing in a statement to reporters: “With regards to our investigation of the DNC hack in 2016, we provided all forensic evidence and analysis to the FBI. As we’ve stated before, we stand by our findings and conclusions that have been fully supported by the US Intelligence community.”

It’s still unclear just where Trump got this idea in his head, but it’s ingrained enough that he mentioned it on a call with Ukraine’s president.