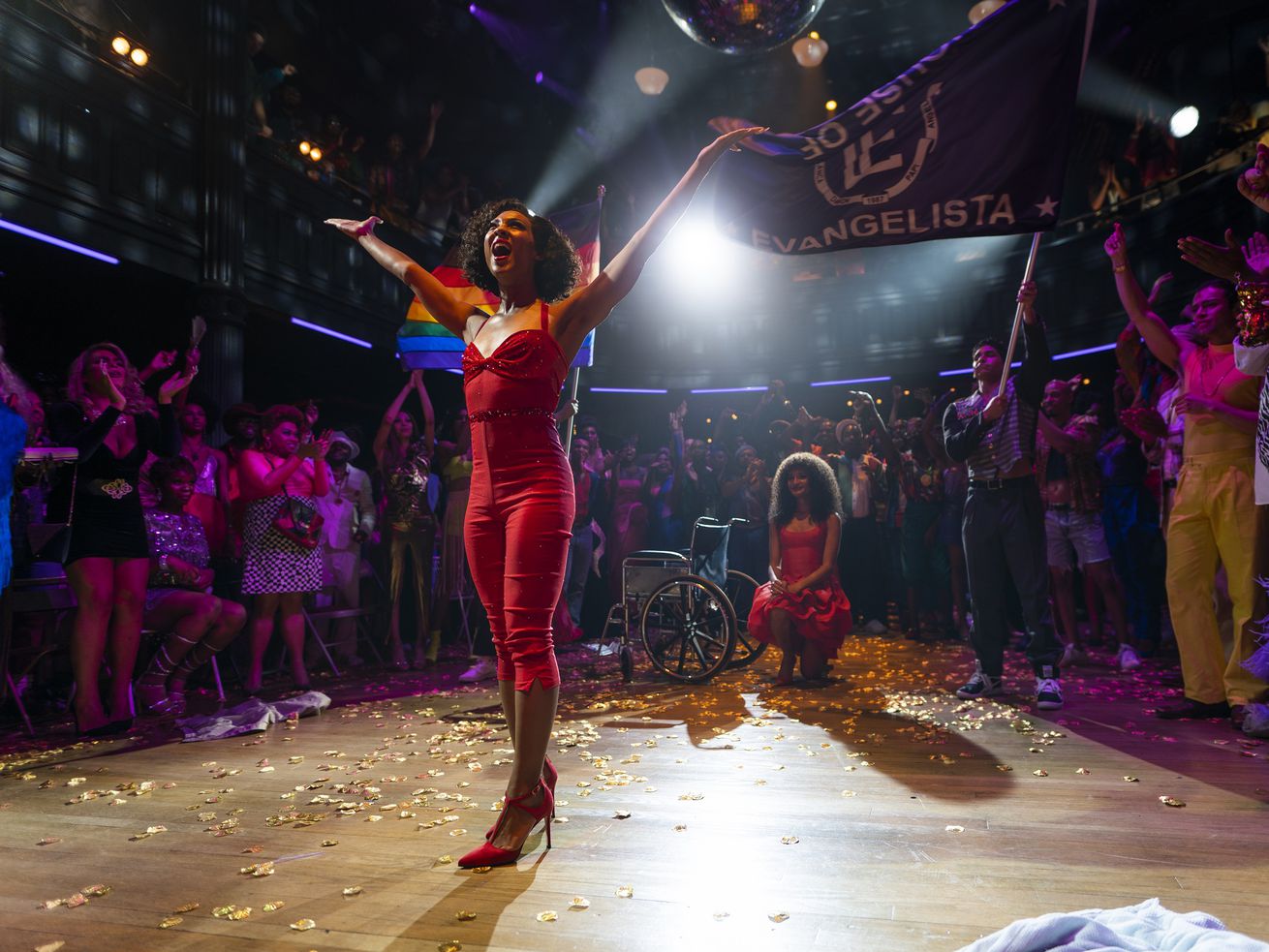 Blanca performs the national anthem in a terrific moment of the Pose season 2 finale. | FX

The series combines the best of serialized TV and episodic storytelling into a potent brew.

Pose’s second season ends with an episode that could be a series finale. Most of the show’s characters reach points that could be read as more or less happy endings, and the few who don’t at least arrive at endings of some sort or another.

What’s more, the episode’s final scene involves Blanca (Mj Rodriguez) and Pray Tell (Billy Porter) — the surrogate mother and father of the show’s growing number of young queer kids who’ve left their biological families and just need to find love and acceptance somewhere — meeting two 14-year-old runaways. They’re a young gay boy and trans girl who’ve run away from home and come to New York, and now could just use something to eat. The implication is that these two kids will be in Blanca and Pray’s lives for years to come. As one generation of kids moves on, another moves in, and Blanca and Pray will be there to take care of them.

Yes, both Blanca and Pray have had health scares stemming from complications with HIV/AIDS throughout the second season. Yes, Blanca is ailing and in a wheelchair. And, yes, both characters’ T-cell counts have been deeply concerning all season long. But for now, they’re healthy enough to keep their found family going.

Yet Pose will be back for another season, and it’s been successful enough that I imagine it will receive another season or two beyond that, even. The choice to end season two with a could-be series finale reflects not the show’s fears of cancellation (as such a move would have in the fairly recent past) but, instead, the changing ways we consume TV stories and the ways that found families of any form function.

Both seasons of Pose so far have been more or less self-contained. This characteristic is baked in to the structure of the show. Season one took place across 1987 and 1988, and while it introduced many of the conflicts that would drive season two, it also concluded at a Mother of the Year competition (honoring the best “mother” to the houses where young queer folks can live and grow together) that functioned roughly similarly to the House Cup in the Harry Potter series. Who won was largely immaterial (and often kinda bullshit), but having the prize to strive for provided a loose structure to what might otherwise feel like a random sequence of events.

Season two, meanwhile, takes place across 1990 and 1991, beginning with the explosion of interest in voguing following Madonna’s hit video for the song “Vogue,” and concluding at another Mother of the Year competition. The season, then, is more of a sequel than a continuation. The show still revolves around the same characters, but when season two begins, more than two years have passed since we’ve seen them.

Presumably, the first episode of season three will pick up after a similar time jump. (If I were to bet, I’d say the series is driving toward the creation of the AIDS cocktail — a medication regimen introduced commercially in 1995 that finally made it possible to live with HIV.) And if time jumps are built into a show’s DNA, it’s almost necessary to bring the major storylines to a close every season, because any tension introduced in a cliffhanger of some sort would inevitably dissipate in the intervening years.

For instance, if two characters kiss in a finale — a popular type of cliffhanger — jumping ahead by two years means skipping right over the early, most interesting parts of their relationship. So individual seasons of Pose have to function more like a movie would, introducing storytelling structures that can exist across multiple installments (like the idea of the House of Evangelista, Blanca’s house that serves as the show’s center) while also focusing on arcs that can be wrapped up in a single season.

Pulling this off is harder than it sounds! Anybody who’s sat through an unnecessary film sequel can tell you what a drag it is to watch a story continue past a natural end point. So for the structure of a show like Pose to work, each season has to end in such a way that offers closure, yet suggests a new beginning. And the final scene of “In My Heels” with Blanca, Pray, and the two kids does so masterfully.

Pose’s secret weapon in this regard might be Ryan Murphy and Brad Falchuk, two of its three co-creators (with Steven Canals). The pair pioneered the anthological miniseries structure that drives some of their most popular series (American Horror Story and American Crime Story, in particular) and where every season tells a new story in a new setting but often featuring some of the same actors. (Murphy mainstay Sarah Paulson, for example, has appeared in eight seasons of American Horror Story, and she’ll have appeared in two seasons of American Crime Story once its third installment debuts in late 2020, but she almost always plays a completely different character.)

Pose isn’t that kind of anthology. Regardless of what form future seasons take, it seems safe to assume that Blanca and Pray will be involved in some capacity, as will the House of Evangelista and the ballroom competitions that happen in almost every episode. But Murphy and Falchuk’s comfort with the anthology format gives them an edge, because they’re now so well-versed in the kinds of time jumps and “same universe, different story” shifts that have bogged down other series. (24, for instance, used time jumps between every season, but its attempts to tie those seasons together in ways more direct than “the same characters are involved” often felt ludicrous.)

This anthology-adjacent structure ends up combining the best of serialized stories (the feeling of characters growing and changing over time) with the best of episodic storytelling (the feeling of a story reaching a satisfying conclusion). But what really makes Pose shine is that said structure — whether accidentally or intentionally — replicates the way found families so often work.

Most people move in and out of your life. TV doesn’t always acknowledge that.

It is fairly unusual to maintain the same circle of friends throughout your entire life. Even where I grew up — in a small town where many of my classmates continue to live within a few hours’ radius — the people who hung out all the time as kids don’t hang out all the time as adults. You might find a romantic partner who you stay with forever, and you’ll probably make a few great friends as an adult, but things like kids and job changes and more mundane life shifts have a tendency to erode relationships right out from under you.

This extremely common shift almost never happens on television, where a friend groups tend to stay together for as long as a show runs, and few people ever quit their jobs, even if those jobs are terrible. TV peddles a fantasy of connection that real life struggles to fulfill. We’re all unlikely to find ourselves in group as tight-knit (and frankly incestuous) as the one on Friends, but don’t you sort of want to?

The ephemeral nature of friendship is hard to accept for almost anybody, but it’s especially difficult in queer circles, where a friend falling away from the group usually means they’ve just got other shit going on, but could also mean something worse. I’ve been an out trans woman in at least some capacity for around a year and a half, and already, I have friends who seemed incredibly important to me for some window of time who have since dropped off the map, no matter how often I try to get in touch.

It’s easy to say “That’s life,” but within a found family of queer folks, the deep friendships that tend to form early in someone’s coming out process feel so powerful because, on some level, they’re some of the first relationships to ever feel true. Unlike most preexisting relationships, they are not coated in the residue of a life the trans person tried to lead but finally could not. So these friendships end up feeling like the first real ones you’ve ever had.

I don’t know whether Pose’s time jumps are meant to capture this feeling, but they subtly do. If season three returns and there’s a high degree of cast changeover (as some critics have speculated might occur), well, that’s life. People move in and out of it as they (and you) grow and change.

Plus, in some cases — particularly the sweet love story between Angel (Indya Moore) and Papi (Angel Bismark Curiel) — I really don’t want to see more of a story that has now ended more or less happily. More story means conflict, and dang it, I want those kids to be happy, even if I know Moore has become the face of the show on magazine covers (and thus will probably be back).

Notably, the way Pose shifts and changes between seasons also reflects the way our TV viewing options have changed. Some viewers might never watch more than a season of the show, but its particular structure means they won’t leave unsatisfied. If your favorite character is written out, you can quit the show and still feel like you watched something good. But the larger story the show tells will continue to reflect those always changing found families.

Pose never calls attention to this particular quality of its storytelling choices, but I appreciate that it’s there. The first season featured a prominent storyline about three white, rich folks whose story ended up intersecting with the House of Evangelista (and Angel, in particular), but those characters never appeared in season two and were only alluded to briefly in passing. That’s just how life works. We know it to be true.

But Pose also understands the power of looking at somebody and knowing they love you as you are, that they can be your parent or sibling or child as meaningfully as any biological relative. Your relationship with that person will change with time, as both of you become different people. But they can never entirely leave you. You’re still marked by them, and they’ll always be there to revisit, whether on Netflix or in your memory.

Pose season two is available on FX’s streaming platforms. Season one is on Netflix. Season three airs in 2020.