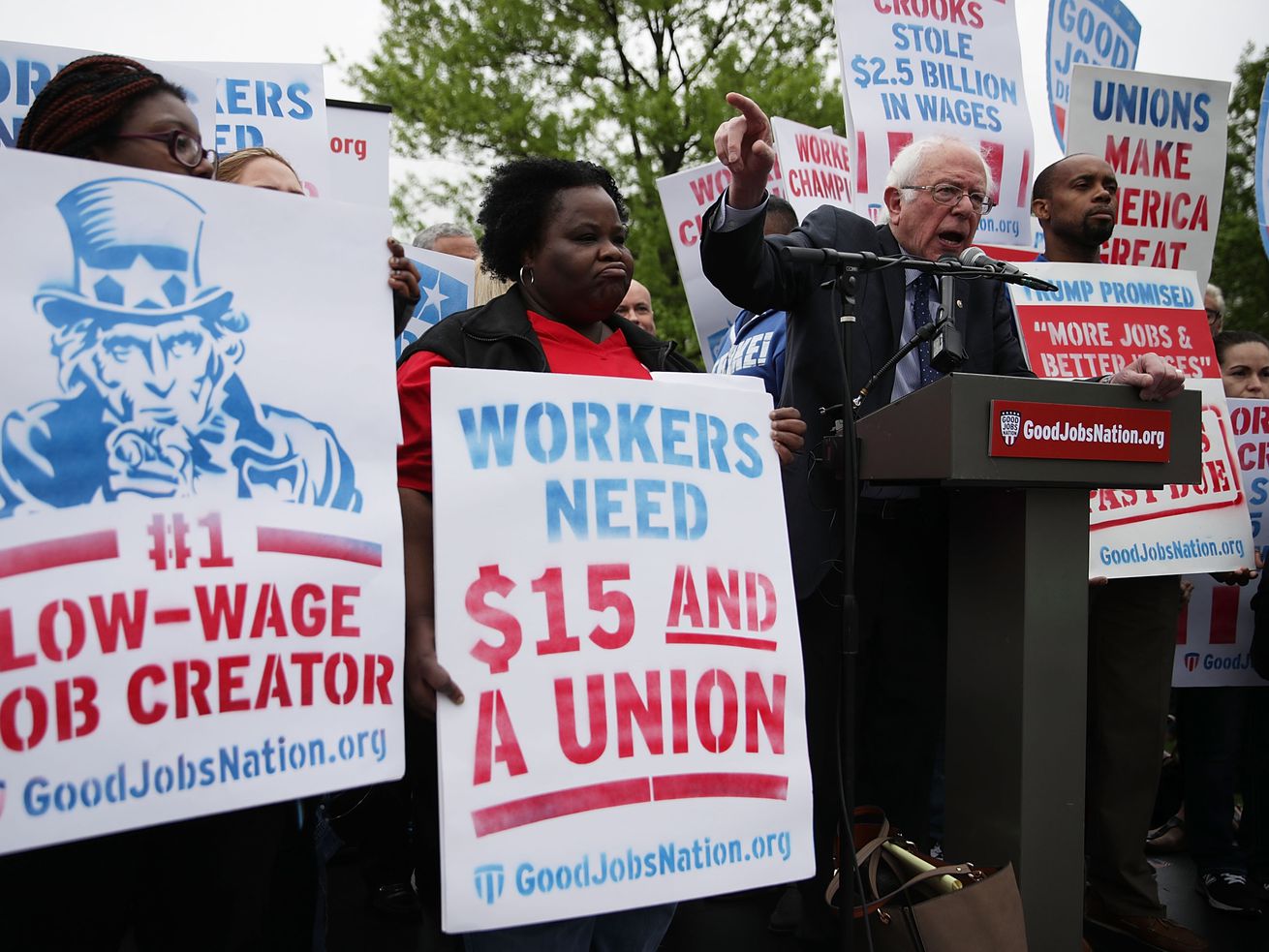 U.S. Sen. Bernie Sanders (I-VT) speaks during a rally in front of the Capitol April 26, 2017 in Washington, DC. Activists and low-wage workers gathered on Capitol Hill to rally for a $15 minimum and rights to form unions. | Alex Wong/Getty Images

Sanders’s plan calls for the end to “at-will” employment, aims to double union membership in his first term in office, and advocates for industry-wide collective bargaining. It also directly addresses criticism from those like former Vice President Joe Biden who argue Medicare-for-all, Sanders’s central health care policy, could be bad for unions.

Sanders has made labor unions central to his presidential campaign platform. Union membership in the United States has been declining steadily since the 1980s. Only 10.7 percent of Americans were union members in 2018, compared to a third of workers in 1950s. As Vox’s Dylan Matthews explained, this decline of union membership is a major factor in the increase in inequality in the US. Currently, women, Latinos, and African Americans represent the fastest-growing contingent of union membership.

“If there is going to be class warfare in this country, it is time that the working class of this country won that war,” Sanders said at the AFL-CIO convention in Iowa Wednesday, where he unveiled the plan.

Through a combination of executive order and legislation, Sanders’s “Workplace Democracy Plan” would end federal contracts with employers that don’t meet certain standards, like a $15 minimum wage. Sanders wants to end “Right To Work” laws, which ban unions from mandating members pay dues and can weaken the group’s sway. Notably, the plan also pushes for a sectoral bargaining system, which would set industry-wide minimum wages and benefits instead of just individual employers setting them.

The plan doesn’t touch on ideas the campaign had previously floated like expanding employee-ownership at companies (though the campaign says it’s still considering those plans), but progressive union voices have already lauded Sanders’s framework as a model Democratic presidential candidates should follow.

“This morning I’m joining workers in Milwaukee to demand every 2020 candidate release a detailed plan like Bernie Sanders’s explaining how they will make it possible for all working people to join unions,” Mary Kay Henry, the president of the Service Employees International Union, one of the largest and most influential unions in North America, tweeted Wednesday. “This is no time for minor tweaks to our broken system.”

Sanders, like many of the Democratic lawmakers in the race, has been courting union support. His team has used campaign mailing lists to send supporters to picket lines in solidarity with union shops, he’s joined workers marching for a higher minimum wage, and his campaign staff became the first presidential campaign to unionize in US history.

Like many of 2020 Democrats’ ambitious policy proposals, much of Sanders’s plan would require congressional support. But at its core, it’s about advancing some of the biggest ideas in a progressive movement that’s a growing force among unionized labor.

Rebuilding union membership is central to Sanders’s proposal. His plan outlines a series of executive orders and bills that aim to strengthen union membership, punish employers who engage in union-busting practices, and raise wages and benefits.

Without Congress, Sanders is proposing:

But much of Sanders’s plan would require legislation. Sanders is calling for Congress to:

Of course, with a divided Congress, and a Republican Party that has pursued an aggressive state-level campaign to weaken labor laws, much of this will be extremely difficult to pass into law. Sanders told Bloomberg he thinks the “momentum” is on the labor movement’s side. That’s certainly true in the Democratic Party, which only three years ago wasn’t behind a $15 minimum wage. The House passed a $15 minimum wage bill in July.

Notably, Sanders plan also addresses criticism he’s received about his Medicare For All Act, a proposal that moves all Americans onto a single government-run program. Several Democratic candidates, including frontrunner Joe Biden and Rep. Tim Ryan (D-OH) and former Rep. John Delaney (D-MD), have argued the proposal goes against union interests. This critique is centered on doing away with employer-sponsored insurance; they say that unions have fought hard to secure generous health care packages from employers, and shouldn’t be forced to switch from that.

“You negotiated really hard for your benefits, for your union,” Biden said at the AFL-CIO convention, the same event Sanders unveiled his worker’s plan. “In my plan, you get to keep it. You don’t have to give it up. … You worked like hell. You gave up wages.”

Sanders’s plan states that if Medicare-for-all were signed into law, he would mandate companies with union-negotiated health plans enter contract negotiations under the National Labor Relations Board. The Sanders campaign says this would be enforced through a rule implemented by the NLRB as well as by legislation.

“Under this plan, all company savings that result from reduced health care contributions from Medicare for All will accrue equitably to workers in the form of increased wages or other benefits,” the plan reads, adding that the unions will continue to be able to negotiate any coverage that’s not duplicative of the benefits under Medicare-for-all. Sanders’s Medicare For All bill proposes expanding current Medicare coverage to also include dental, vision and hearing.

Sanders has long argued that if unions didn’t have to spend all their political will fighting for health benefits, they would have more room to win higher wages and benefits. There is a wealth of research that has found increased health care costs bring down wage growth. Although there’s less evidence that companies engage in the trade-off the other way, but as Sarah Kliff reported, experts in labor economics believe this relationship exists.

It should be noted that several of the country’s biggest unions agree with Sanders’s reading of Medicare-for-all. As Vox reported in August, representatives from Association of Flight Attendants, American Federation of Teachers, and SEIU are all open — if not supportive — of single-payer health care.

“Every time we go to the table the for-profit system has put so much pressure that when we get what we already have we call that a win,” Sara Nelson, president of the Association of Flight Attendants, told Vox then about the difficulties negotiating health care poses. She added that having a government-sponsored baseline health insurance would go a long way to help unions negotiate better wages, and benefits in other areas of their contract.

Unions still plays a big role in Democratic politics. But that role — and the union membership itself — are changing.

There was a lot of fretting about the union vote after the 2016 election. Exit polling from the 2016 presidential election showed Trump trailing Hillary Clinton by only 8 points among union households — a significant improvement from Mitt Romney, who trailed Barack Obama by 18 points with those same voters. Those numbers, in part, reflect a shift among white men, according to data from the Cooperative Congressional Election Study.

But organized labor still represents one of the most influential groups of mobilized voters, historically, for Democrats.

Union members “vote at higher rates than most Americans, they are mobilized, they are in important states,” Paul Frymer, a political scientist with Princeton University who has written on the labor movement, told Vox in May. “The union movement is a big part of the Democratic Party — there isn’t another mobilized coalition like it. They are the biggest civil rights movement in the country.”

While union membership on the whole is dropping, the percentage of people of color in unions is increasing. Unions like SEIU, which mainly represent women and people of color in industries like home care, cleaning services, and health care, have a completely different read on what happened in 2016. Working voters of color didn’t go to Trump; they stayed home.

And this newer labor movement is mobilized around a much more progressive agenda. SEIU’s Mary Kay Henry unveiled the “Unions for All platform” Wednesday, much of which is echoed in Sanders plan.

As Dylan Matthews wrote for Vox, since the 2016 election, the Democratic Party — in large part because of the Sanders presidential campaign — has started to listen. It’s embraced a variety of European-inspired tax and spending policies, from single-payer health care to tuition-free college.

The future for traditional unions looks so bleak that a growing number of labor scholars and activists are coming to the conclusion that the US model, which relies on individual workers in individual workplaces getting together and organizing on their own, is dead and can’t be revived. What’s needed, they argue, is a more national or industry-wide approach to supplement or replace the old model of individual workplace-level organizing.

Sanders is expanding that platform directly to organized labor.