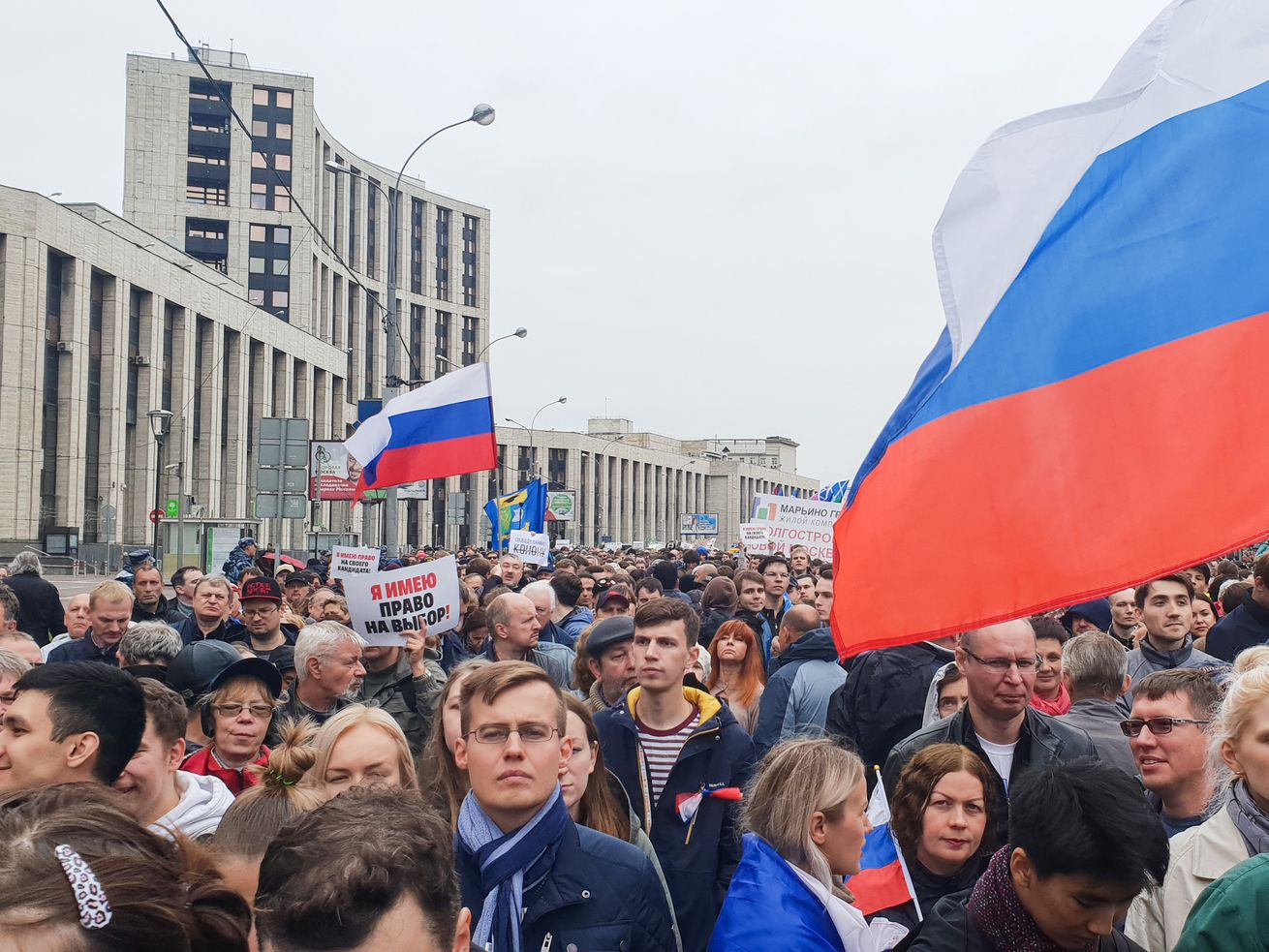 In July, Moscow election officials banned opposition candidates from running for city council. This weekend, protests swelled to 50,000 in Moscow.

Tens of thousands of people protested in Moscow on Saturday, marking the fifth weekend people have rallied in the Russian city to demand fair elections.

The demonstrations began in July after election officials barred opposition candidates from running for the Moscow city council, disqualifying their ballots because of what officials claimed were irregularities in the 5,000 signatures each had to gather to run.

That decision — to block the opposition from participating — turned a sleepy municipal election into a political controversy that intensified amid police crackdowns against demonstrators and opposition figures.

Saturday’s rally in Moscow was the largest yet, and one of the biggest political protests in Russia in years. Estimates put the crowds at about 50,000, although authorities suggested the official number was closer to 20,000. The rally was sanctioned — meaning people had a permit to protest — although police reportedly arrested about 200 people. Russians in other cities, including St. Petersburg, also joined in on the demonstrations, a sign that the unrest and dissatisfaction may extend beyond Moscow.

Moscow’s municipal elections are very much the focus of these protests, but it’s hard to divorce it completely from larger political and economic issues within Russia, specifically President Vladimir Putin’s authoritarian regime.

“As with many other protests and uprisings all around the region, they’re much more fluid when it comes to reason, but they’re still emblematic of what is happening with the general dissatisfaction with the state of affairs, in this particular case, the policies of Putin’s administration at the moment,” Maksym Eristavi, a senior fellow at the Atlantic Council in Prague, told me.

The Moscow city council elections are expected to move ahead on September 8, and it seems extraordinarily unlikely that authorities will give in to protesters’ demands and let the opposition stand for the vote. But if the protests continue or continue to spread, the uproar over the municipal elections may be just the beginning.

Opposition leaders followed the onerous rules to get on Moscow’s city council ballot. Election officials still denied them the chance to run.

All 45 seats in the Moscow city council are up for reelection on September 8. The legislative body is controlled by the pro-Kremlin ruling United Russia party. But the party is pretty unpopular right now, so the Moscow United Russia candidates came up with an ingenious plan to run as independents in the city council instead.

A bunch of people actually wanted to run as legit independents — opposition candidates. To do so, they had to meet some pretty onerous requirements, specifically garnering 5,000 signatures each from voters.

About 30 opposition candidates were initially disqualified from running, and many just happened to be outspoken critics of the Kremlin. In another funny coincidence, none of those United Russia-candidates-turned-independents were disqualified, although critics claimed they didn’t even bother to actually collect signatures or that their applications were barely verified by election officials.

The protests continued. On July 20, more than 20,000 protesters met in Moscow to demand the opposition candidates be included on the ballots.

Opposition leader and anti-corruption advocate Alexei Navalny — a major Putin critic who was blocked from running against him for the presidency in 2018 — had called for another protest on July 27 and was promptly arrested on July 24 and sentenced to 30 days in jail for organizing an unauthorized protest. While in prison, he was hospitalized with a severe allergic reaction, with some allies worrying that he might have been poisoned.

Other opposition candidates have since been arrested, including Dmitri Gudkov, who once served as an opposition voice in the state duma (legislature) and has now been sentenced to 30 days in jail for organizing an unauthorized election protest; and Ilya Yashin, a prominent opposition figure arrested for organizing an unauthorized protest after the July 14 rally. Yashin is also calling for Moscow to cancel the September 8 elections.

But the demonstration still went ahead on July 27, where Russian police arrested nearly 1,300 people and reportedly beat back protesters with batons.

A fourth round of protests took place on August 3, with several hundred detained. And on August 10, 50,000 people gathered, including some high-profile Russian celebrities, even though many of the opposition leaders are now jailed. Lyubov Sobol, an opposition candidate who is now on a hunger strike in protest of her exclusion from the Moscow ballot, posted a video on Twitter that appeared to show police barging into her apartment ahead of the protest.

The protest on August 10 — like that on July 20, where 20,000 participated — was sanctioned, meaning protesters had a permit. Brian Taylor, a professor in the Maxwell School at Syracuse University, told me that might have made it more likely for people to come out and protest, as the risk of arrest is a bit lower than during those unauthorized protests.

“Even so,” Taylor said, “we do seem to be seeing a ramping up in tension around this rather than a successful repression of protest on the part of authorities so far.”

Eristavi, the senior fellow at the Atlantic Council, told me it’s important to keep in mind that people were still detained, but that authorities were careful to avoid arresting people in large numbers, and largely did so away from the cameras.

He described this as part of the Kremlin’s “larger disinformation narrative” to sow confusion. “You’re not acting out as completely authoritarian places like North Korea, or some places that just don’t care about the optics — you have to preserve some kind of a confusion,” Eristavi said. “If I’m abroad, or even I’m somewhere else in Russia, and I’m seeing this, I don’t know what to make of it; it could be worse.”

But beneath the optics, there’s corruption and a skewed justice system and media and internet restrictions. And these bigger issues are what the Moscow protestors may be demonstrating about going forward.

“It started off fairly small, but it’s obviously now mushroomed into something more than just can they stand for election to the municipal council,” Angela Stent, author of Putin’s World: Russia Against the West and with the Rest, told me. “But it’s a much broader issue of people’s rights, people’s right to vote, to choose who represents them.”

What prompted the protests in Moscow is very much authoritarianism 101: the government using all the tools available to sideline and stamp out the opposition.

“Wherever the opposition goes right now, they’re meeting what we might consider soft repression, manipulation,” Taylor said. At first, election officials tried to ban the Moscow candidates from the local elections; when that didn’t work, authorities started arresting those opposition leaders and protesters.

The question is why they would go to such lengths. It would seem that letting a few opposition candidates into the Moscow city council to debate budgets and discuss trash pickup might not be much of a threat to Putin’s regime. Voter turnout tends to be pretty low for local elections, anyway.

But that’s not how the Kremlin is looking at it — or dealing with it.

“In the past, you might have expected, even this time, the Kremlin to say, ‘okay fine, a couple of people can run,’ and then just figure out a way to manipulate the ballot so that they don’t actually win, even if they do win — or if they win, then figure out some excuse to have them removed,” Evelyn Farkas, a senior fellow at the German Marshall Fund who served as Deputy Assistant Secretary of Defense for Russia, Ukraine, and Eurasia from 2012 to 2015, told me.

But instead, Moscow basically dug in. And the opposition, this time, responded in kind. “‘The Kremlin is digging in its heels, so let’s test it,’” Farkas said.

Moscow, of course, is a major city, with more than 12 million residents, so Putin’s regime is going to be particularly attuned to what’s going on in the city. And Putin may have particular reasons to be a little sensitive these days.

Putin and the ruling United Russia party have been slipping in popularity as more Russians become disillusioned with the state of the Russian economy, including rising inequality and falling incomes. Declining oil prices and sanctions have squeezed the Kremlin, and the government had to push through unpopular measures last year, including increasing the retirement age.

Though Russian media is tightly controlled, citizens are also starting to express frustration about Russian government corruption and mismanagement and the country’s increasing isolation in the world. And many, especially younger generations, have basically known no other leader but Putin. They’re beginning to wonder about Russia’s political future when Putin’s term is up in 2024. Many are unsure about what will happen after —or if there will actually be an after.

“I think a lot of this is about the future of the country, and are these young people now, if you’re 30-years-old, are you going to continue to have to live under a system like this, where you really don’t have a lot of political choices and where the economy isn’t doing so well?” Stent said.

Stent and others pointed out that the protests are being led by young people, similar to the protests that have rocked Hong Kong for weeks. And while there are definitely visible opposition figures, they’re both largely leaderless and rely on grassroots organizing — making them more fluid and spontaneous, and maybe just a bit harder for authorities to squash fully.

Putin, meanwhile, has accused Western democracies, specifically the United States, of meddling and fomenting the unrest — a talking point that he’s famously used before.

Putin’s problems are likely closer to home, although it’s far too early to say what these protests will accomplish — and what it means for Russia. Experts pointed out that this weekend saw other cities join in protests, including St. Petersburg, where about 80 or so people were detained. If that continues, that’s a sign that discontent might be more widespread.

But few thought Moscow’s protests were a legitimate threat to Putin’s regime, at least in their current form. The government has been able to keep the opposition off the ballot and to largely deal with the protests through arrests. And Putin has faced politics protests in the past, notably in 2011, 2012, and 2013 over the electoral system, all of which faded without much changing.

“We shouldn’t assume the days of the Putin regime are numbered,” Stent said. “We’re not there yet.”