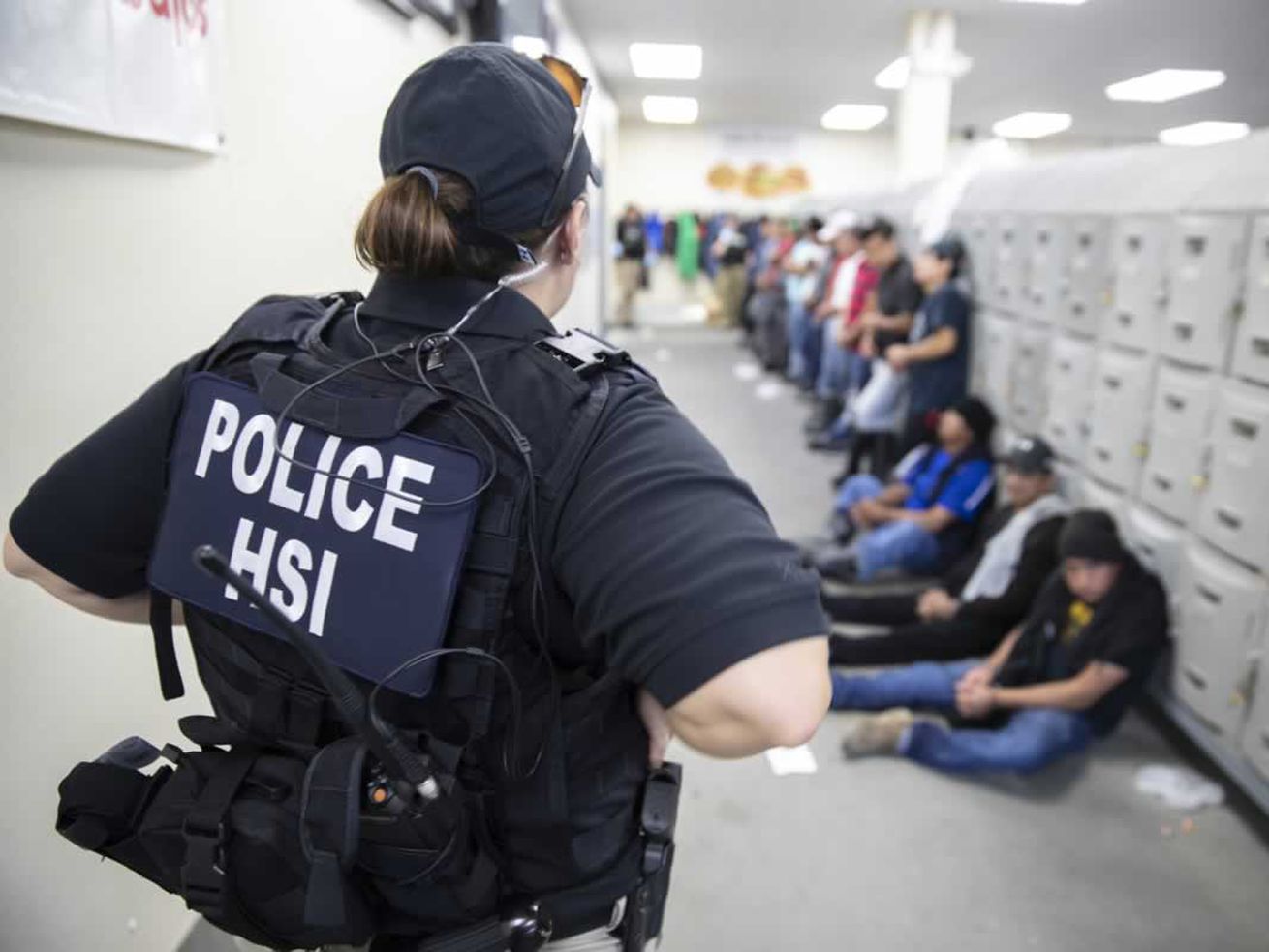 They ignore the high demand for workers to fill low-skill jobs in America.

A Mississippi community is reeling from the aftermath of one of the largest worksite immigration raids in history. Immigration and Customs Enforcement (ICE) officers swept through seven chicken processing plants in the rural region of Morton Wednesday, arresting 680 suspected unauthorized workers. Dozens of children arrived home from school to find their parents gone.

ICE says the operation was about enforcing US immigration laws that make it illegal for immigrants to work in the US without authorization. While it’s true that ICE officers with a warrant have the authority to raid workplaces, Wednesday’s operation sheds new light on the cruelty of the US immigration system.

But even more so, it also reveals a fundamental flaw in US immigration policy.

American immigration laws do practically nothing to address the main cause of illegal immigration: super high demand for low-skill work, and not enough workers available to fill those jobs. There’s practically no way for a low-skilled worker from Guatemala to “wait in line” for a visa to take a job at a chicken processing plant in Mississippi. Only one such visa exists — the EB-3 visa — but it’s limited to a tiny number of people (5,000 max).

Yet the US economy needs hundreds of thousands of workers to fill these jobs right now. The US is experiencing a serious labor shortage, and it’s harder for businesses to find low-skilled workers these days than high-skilled workers.

However, employers have no way to hire immigrants for jobs like those at chicken processing plants. And instead of creating pathways for low-skilled immigrants to work legally in the US, Trump has proposed an immigration plan that would specifically favor immigrants with advanced college degrees. If the Trump administration wants stop illegal immigration, he needs to do the opposite.

The line into America isn’t open to certain immigrants

The best chance for a poor, low-skilled Central American immigrant to work in the US is through one of two guest worker programs: The H2A program for agricultural workers and the H2B program for seasonal work, which includes jobs at hotels, amusement parks, and landscaping firms.

But there are only about 75,000 visas available each year for guest workers, and they only cover some high-demand jobs like landscaping and food preparation. There is no guest-worker program for year-round jobs, like those at chicken processing plants in Mississippi, for example.

One of the driving factors behind the “enormous growth” of undocumented immigrants living in the US in the 1990s and 2000s is the lack of legal avenues for low-skilled immigrants to work in the United States, write Madeleine Sumption and Demetrios Papademetriou at the Migration Policy Institute.

So one obvious solution to the problem of unauthorized immigration is to create a program that provides work visas to low-skilled immigrants. But no one is seriously discussing this, least of all the 2020 candidates.

Demand for low-skilled work is high, even in Mississippi

Meanwhile, the country is experiencing a massive labor shortage across all industries, and businesses are having a much harder time finding construction workers, restaurant cooks, and hotel housekeepers than computer engineers and doctors. The most in-demand jobs are exactly the kinds of jobs that unauthorized immigrants are doing.

The numbers say everything. In March, there were only 811,000 unemployed workers with bachelor’s degrees looking for work, and 1.4 million open positions for professionals like them. The US needs more high-skilled workers to fill all those positions, sure, but the gap is even bigger in low-wage industries that don’t require a college education.

There were more than 2.1 million open positions for low-skilled workers in March, but only 1.4 million people without college degrees looking for work. That’s nearly two jobs available for every unemployed person with nothing more than a high school diploma.

In Mississippi, for example, the most in-demand jobs require little to no training or education. In fact, 16 out of the 20 most needed jobs in 2018 didn’t require more than a high school education. That includes cooks, janitors, and construction workers. Yet there are fewer people than ever looking for work. The unemployment rate in Mississippi, while higher than the national average, is at its lowest point in decades, making it hard for businesses to find workers.

Trump’s restrictions on immigration threaten to make the labor shortage worse. Since taking office, his administration has tried to scale back nearly every avenue of legal immigration, ignoring the high demand for unskilled immigrant workers, even at his own golf clubs.

Back in 2017, the Wall Street Journal’s editorial board warned Trump that his restrictions on immigration could hurt the economy.

“If President Trump wants employers to produce and build more in America, the US will need to improve education and skills in manufacturing and IT. But the economy will also need more foreign workers, and better guest worker programs to bring them in legally,” the newspaper said in March 2017.

Darrell West, an expert on technology and public policy at the Brookings Institution think tank in Washington, pointed out in 2013 that the US economy would suffer if Congress didn’t overhaul the immigration system:

America’s immigration system is not designed for today’s economy, and remains largely unchanged since 1965. In fact, of the approximately one million green cards given out by the US in 2011, around 139,000 (or 13 percent) were given out for economic reasons, a number far too small to meet the needs of the world’s largest economy.

Providing more work visas for skilled and unskilled immigrants seems like an obvious solution to ease the labor shortage. But it’s also the one solution Trump refuses to adopt.

What we know about Trump’s immigration platform

The president’s latest immigration plan is light on details. But Trump and his advisers have long talked about changing the US immigration system to focus on “merit.”

The United States currently issues more than 1 million green cards each year, which provide foreigners with legal permanent residency, according to data from the Department of Homeland Security. Roughly 140,000 are employment-related (only 5,000 can go to unskilled workers); the rest are based on family ties, refugees status, and the diversity lottery.

The plan Trump is proposing would change that entirely. The new green card system would prioritize immigrants with high levels of education, English-language fluency, and professional skills. (It also includes more money for border security.) Most of the green cards would go to immigrants under a point system that ranks applicants based on certain criteria, such as professional skills, education level, age, and English fluency.

Another element, according to the Washington Post, includes points for applicants based on “patriotic assimilation,” a concept that would favor immigrants who show interest in American culture. That could include a test of historical texts, such as George Washington’s farewell address.

Notably, as Dara Lind explained for Vox, the plan does not address the unauthorized immigrants currently living in the United States; it also pivots away from Trump’s habit of talking only about the crisis of migrants crossing the southern border. Instead of addressing asylum seekers and immigrants already in the US, Trump’s plan emphasizes the “exception immigrant” narrative, which assumes that the only immigrants of value to a country are highly educated.

But a focus on high-skilled immigrants would do little to solve the biggest problems with the current immigration system.

For nearly a year now, the number of open jobs each month has been higher than the number of people looking for work — the first time that’s happened since the Department of Labor began tracking job turnover two decades ago.

At the end of January, the US economy had 7.6 million unfilled jobs, but only 6.5 million people were looking for work, according to data released last week by the Labor Department. This was the 11th straight month that the number of job openings was higher than the number of job seekers. And each month, the gap has grown.

Nearly every industry now has a labor shortage, but the hardest-to-find workers are no longer computer engineers. They are home health care aides, restaurant workers, and hotel staff. The shift is happening because more and more Americans are going to college and taking professional jobs, while working-class baby boomers are retiring en masse.

This means that for once, low-skilled workers should have the most leverage in the current labor market.

There’s no better time for working-class Americans to demand better wages, benefits, schedules, and work conditions. But it also means immigration reform is more urgent than ever. To fill all the open jobs and keep the economy growing, Trump and Congress will need to allow more low-skilled immigrants to work.