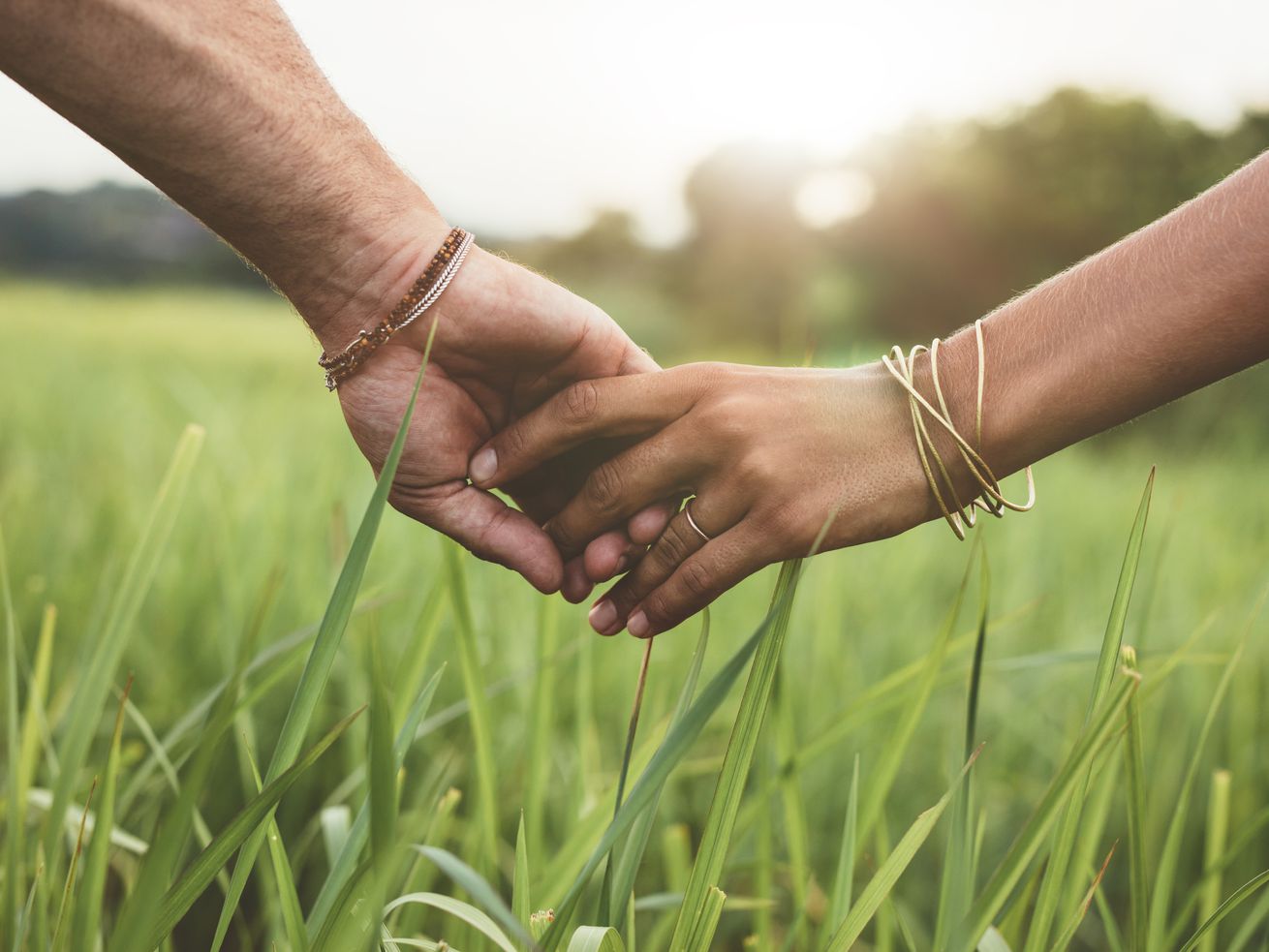 The first time I noticed a celebrity talking about “doing life together” a few years ago, I didn’t think anything of it. It was the summer of 2016 and JoJo Fletcher’s season of The Bachelorette had introduced us to Ben Higgins and Jordan Rodgers. JoJo wanted to “do life” with both of these men. But, per reality TV obligations and polygamy laws in America, she could only “do life” with one of them. Luckily, Jordan was down: “She’s the person I want to do life with,” Jordan said while taping the “After the Final Rose” special.

But people — famous people — kept talking about “doing life together.” And it began to jar me, like eavesdropping on a conversation where people keep saying your name. It got louder and louder, until it wasn’t just Fletcher talking about it but the singer Michelle Williams and Corinne Olympios from The Bachelor and, most incredibly, Hailey Bieber talking about her husband on Kendall Jenner’s podcast. “I feel like he’s my best friend,” she said. “And we just get to do life together forever now.”

The reason this phrase made me sit up a little straighter and pay attention was that it comes from the evangelical subculture, a world I grew up in and a language I speak fluently. There, “doing life together” has to do with the belief that God created people to be in community with each other — “It is not good for the man to be alone,” God said about Adam after creating him. So God made Eve. Together, as man and woman, they would be better than they were separately.

That idea extended beyond marriage into the larger church community, where Bible studies and small groups and midweek church services were meant to bring people into each other’s lives, to share the daily minutiae of belief and praxis. So how did this phrase — this awkward, sweet, theologically laden phrase — make its way from the church to The Bachelor?

A brief history of “doing life together”

In a word: Instagram. To back it up: blogs and Instagram. Picture a Venn diagram with one circle labeled “Instagram influencers” and the other labeled “evangelical women online.” The overlap is larger than one might initially guess, and it is largely responsible for disseminating “Christian-ese” into the broader culture.

Take Rachel Hollis, for example. The motivational speaker and best-selling author saw her brand skyrocket after an Instagram post of her proudly displaying her stretch marks in a bikini went viral in 2015. Hollis is a Christian — both of her recent books, Girl, Wash Your Face and Girl, Stop Apologizing, were published by Thomas Nelson, a prominent Christian publisher that also publishes a roster of top evangelical leaders. In her first book, she thanked her family’s nanny in the acknowledgments, “Jojo, I literally don’t know how we would do life without you.”

Hollis is arguably the most prominent member of a group of soft-power evangelical women who use social media as a platform both for the gospel and for their own brands — some of which they consider interchangeable. Hailey Bieber’s career is outside those explicitly evangelical circles, but she and Justin have been known to attend Hillsong Church and are close with several of its pastors, as well as pastors of other large churches.

The Bachelor has a roster of evangelical contestants, from Colton Underwood to Sean Lowe to Ben Higgins to this season’s Luke Parker, which means that they talk about “doing life together” with the woman/women they’re pursuing, and that their conversation trickles down into the larger culture so that, suddenly, we’re all talking about doing life together.

Some evangelicals use words like “broken” instead of “sinful,” or “love on” (seriously) to mean “caring for a person”

The church I attended growing up in suburban Chicago had no crosses, no pews, no stained-glass windows. The idea was that seeing a lot of these things could be triggering for people who were religiously traumatized. So it is for language in the evangelical world, which is why they sometimes use words like “broken” instead of “sinful,” or “love on” (seriously) to mean “caring for a person.” These phrases can slip easily into the cultural lexicon without the baggage that words like “sin” might have, and without the need to add context.

The phrase “doing life together” popped up in Christian books in the early 1990s, first in a book called The Stained Glass Fishbowl by Harley D. Hunt, published in 1990, and then in a book called Fight the Good Fight by Philip and Joyce Bedsworth in 1991.

A 1996 book — Growing a Family Where People Really Like Each Other — took a faith-based approach to raising a family, “deepening joys because we do life together.” And somewhere in the next few years, the definition of who “does life together” expanded from couple to family and again from family to community. It is worth noting that the way the phrase is used both within churches and on social media has little, if anything, to do with one’s family of origin. Parents talk about “doing life together” with their spouses and children, but it’s rare that they include, for instance, their own parents, grandparents, aunts, and uncles in that category. We “do life” with the people we choose, not necessarily with the people who chose us.

We do not live life within those bounds; we “do” life

In 2006, a Colorado pastor wrote about how handy he found the phrase “We do life together.” “I think this says it perfectly,” he wrote. “I can teach Bible principles in the midst of actually living life better than I can in the midst of a sanctuary full of people listening to me.” The pastor, Ted Haggard, was just a year from buying sex and methamphetamines from the escort and personal trainer Mike Jones.

Haggard was raised in a family of charismatic Christians — a group who believe in the ongoing activity of the Holy Spirit in the world via gifts like prophecy, healing, and speaking in tongues — in rural Indiana. He attended Oral Roberts University in Tulsa, a school named for the godfather of the American charismatic movement and one that emphasizes a strict behavioral code: No premarital sex is allowed, students cannot drink or smoke, and in 2015 it required new students to keep track of their physical activity by wearing Fitbits.

While the Fitbit requirement is unusual by any standard, that level of scrutiny on individual behavior is typical of evangelical colleges and institutions. The evangelical narrative of faith often hinges on the fulcrum of conversion, the moment in which a person repents of their sins and is “born again.” And while all Christian sects have sought to embody biblical virtues like gentleness, kindness, patience, and self-control, part of where the strictures of evangelicalism become nearly impossible to uphold is its insistence that its adherents perform perfection post-conversion. We do not live life within those bounds; we “do” life.

Now this “life” is for sale: “Doing life together” has moved beyond blogs and Instagram and into the marketplace: You can now buy paeans to “doing life together” in the forms of tea towels, decorative signs, and mugs. Conferences for female writers and influencers — like RISE, Rachel Hollis’s incredibly popular multi-city conference “for women who want to leave knowing more people and knowing themselves better” — seek to offer “life together” for the price of a ticket, promising both new friendships at the conferences and a renewed sense of purpose at home. But what are these tchotchkes, these mugs and towels and even conferences, really selling?

”Doing life together” is an Instagrammable version of an admirable value, one with roots in the first days of Christianity. The New Testament Book of Acts records the sharing of resources in the early church: “They devoted themselves to the apostles’ teaching and to fellowship, to the breaking of bread and to prayer. … All the believers were together and had everything in common.” They lived in the kind of rich community that pundits use to highlight the isolation, individualism, and profound loneliness that plague many of us in 2019. At its best, the Christian church has been a corrective to people’s loneliness. The Apostle Paul enjoined the Galatians to “carry each other’s burdens, and in this way you will fulfill the law of Christ.”

The trouble is that we now live in a world in which the church of Acts would be considered radical — the sharing of resources, the daily meeting, the slowness of things. It’s basically communist, and not at all easy to fit into a hashtaggable picture.

Too often, what counts for community and vulnerability is not much more than occasional meals together and blog posts about welcoming friends into messy homes. If the goal for all Christians is to “do life together” in a meaningful way, it needs to be a version of life that is greater — and smaller and slower — than that.

A recent study found that nearly half of Americans feel alone or left out at least sometimes, if not always. There are many people, Christians included, whose inner lives remain unknown even by those closest to them while they project impressive images. Church attendance can help protect against loneliness, but it can also prop it up, especially in so many of the churches where keeping up appearances is more important than the radical honesty that precipitates spiritual transformation.

Looking back at the examples of Ted Haggard or the administration at Oral Roberts, it’s easy to see how some Christians think that a certain kind of legalism will protect them from ever engaging in sinful behavior — and how, in Haggard’s case, they go to wild lengths to keep from being found out. In this kind of environment, “doing life together” can become a resounding gong of hollow meaning, making lonely people feel even more excluded. The gap between who we know ourselves to be and the image we project is fertile ground for breeding shame and isolation.

The clue lies in using the word “do” to talk about life. We perform living.

“Doing life together” in 2019 is largely performative — as is all social media. It is what we use to say, “Here are my friends, here is my spouse; see, I’m not so unlovable that I’m all alone, even though sometimes I might feel that way.” It is how we telegraph our social desirability. The clue lies in using the word “do” to talk about life. We perform living. We check off boxes, we behave in the right ways, we work and work and work so that we look good — even if we don’t feel good, even if, fundamentally, we aren’t good. Cultivating virtues takes a back seat to showing off our curated highlights, even if we mostly publish them to tell ourselves the story we need to believe in order to live.

Finding community is a challenge even for the most connected people. A lot of the women’s conferences that exist try to solve this problem by bringing women together for a weekend, uniting them around their goals or their shame or their shared experiences. And many of these places deliver: In a world of lonely people, doing life together can be an antidote to isolation. It can be effective, at least for a while, although the problem of loneliness can’t be solved so easily.

Can we ward off loneliness with a mug of hot coffee or a conference ticket, even with the perfect Instagram post? No, because the most satisfying kinds of relationships are generally not for sale. “Doing life together” can remain a hollow phrase unless we make the words mean something. But we can try. And trying, after all, is what doing life together is all about.

Sign up for The Goods’ newsletter. Twice a week, we’ll send you the best Goods stories exploring what we buy, why we buy it, and why it matters.