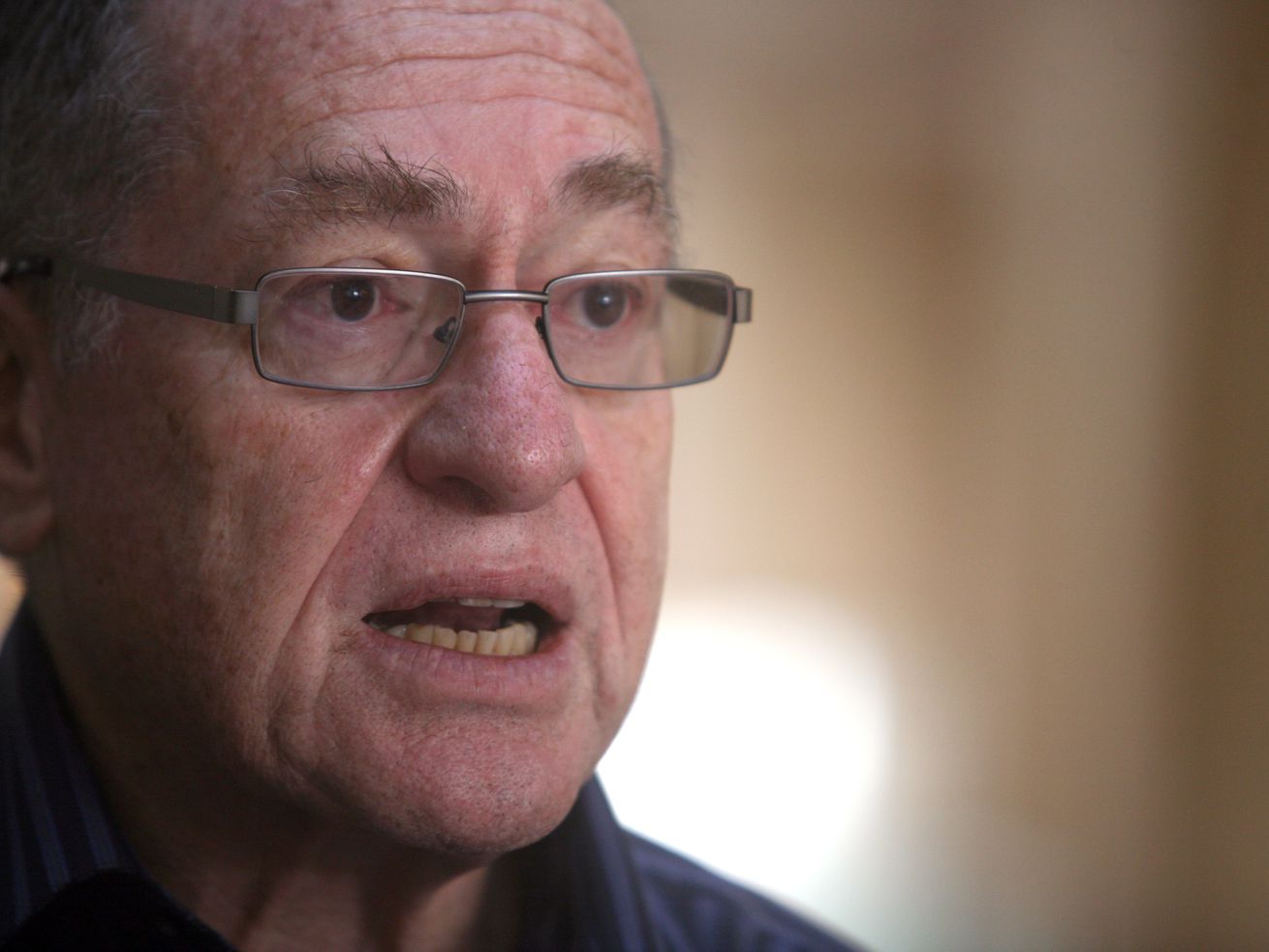 Attorney Alan Dershowitz speaks during an interview on May 18, 2010, in Jerusalem, Israel. | Lior Mizrahi/Getty Images

“I’m going to continue to speak out until the day I die,” the Harvard Law professor told Vox.

When Jeffrey Epstein found out in 2005 that he was being investigated by police for the sexual abuse of underage girls, he called Alan Dershowitz.

A Harvard Law School professor and high-profile defense lawyer, Dershowitz helped negotiate a “non-prosecution agreement” under which Epstein served just 13 months in a county jail, much of it spent on “work release” in an office. Ever since details of that agreement were reported by Julie K. Brown of the Miami Herald, Dershowitz and his role in the deal have been under added scrutiny.

That only increased this week with the publication of a New Yorker story by reporter Connie Bruck, detailing not just Dershowitz’s role in defending Epstein, but also allegations by two women who say that they were directed to have sex with Dershowitz while in Epstein’s orbit. Dershowitz vehemently denies both allegations.

Despite widespread attention to his role in the Epstein case — and a defamation suit from one of his accusers — Dershowitz has no intention of laying low. For instance, he continues to publicly criticize age-of-consent laws — most recently on Twitter, earlier this week.

For some, his defense of Epstein is a reminder of the way the American legal system continues to favor powerful men who can pay high-profile attorneys.

But Dershowitz sees himself as the wronged party, victimized by women who are lying about him, but determined to clear his name.

“I’m a victim of false accusation,” he told Vox, “and I’m going to continue to speak out until the day I die.”

Dershowitz started his career as an advocate for civil liberties, Bruck writes, taking on pro bono cases that challenged censorship laws and the death penalty. He was hired as an assistant professor at Harvard Law School in 1964, while still in his 20s.

But in the ’80s and ’90s, Bruck reports, Dershowitz started taking on more high-profile clients. He handled appeals for Claus von Bülow, a wealthy man with a mansion on New York’s Fifth Avenue, as well as boxer Mike Tyson, who had been convicted of raping an 18-year-old woman. (Von Bülow’s conviction was overturned; Tyson’s was not.)

Dershowitz met Epstein in 1996, and apparently became part of his “collection” of famous and well-connected friends. According to Bruck, the two flew together that year to a party at the Ohio estate of Leslie Wexner, the founder of Victoria’s Secret and Epstein’s only publicly-known client. “I was Jeffrey Epstein’s intellectual gift to Leslie Wexner,” Dershowitz said.

Dershowitz later told the Harvard Crimson that Epstein was “brilliant,” and that the money manager was the only person outside his family he trusted to read drafts of his books. Epstein also helped Dershowitz invest some money in a hedge fund, and when the fund lost money, he pressured the fund’s founder to recoup Dershowitz’s losses, according to Bruck.

Bruck also reports that in the 1970s, Dershowitz’s marriage to his first wife, Sue Barlach, fell apart. A judge in the divorce proceedings wrote that Dershowitz’s behavior toward Barlach “negatively affected the plaintiff’s health to the extent that she required medical treatment and briefly some psychiatric therapy.” Dershowitz denies mistreating her.

He sought custody of the couple’s children, and, Bruck reports, gave an expert witness tapes of his phone calls with Barlach to bolster his case (Dershowitz told Bruck he did not recall taping the calls). Ultimately, he was awarded full custody. In 1983, Barlach died.

In an initial version of the New Yorker story, Bruck wrote that Barlach had jumped off the Brooklyn Bridge. Dershowitz told Vox this was inaccurate, and charged that the anecdote had been sourced from Rense.com, an anti-Semitic website.

A spokesperson for the New Yorker told Vox in an email that “Rense.com formed no part of the sourcing of this story” and that “the article has been updated to better reflect the circumstances under which Sue Barlach died: ‘On New Year’s Eve, 1983, she drowned in the East River, in an apparent suicide.’”

He helped Jeffrey Epstein get a cushy “non-prosecution agreement”

Last year, multiple women spoke to Julie K. Brown of the Miami Herald about repeated abuse they say they experienced from Epstein as teenagers. “Jeffrey preyed on girls who were in a bad way, girls who were basically homeless. He went after girls who he thought no one would listen to and he was right,’’ Courtney Wild, who was 14 when she met Epstein, told Brown.

But Dershowitz went to work discrediting some of Epstein’s accusers, Bruck reports. One young woman, identified as A.H., said that she had started going to Epstein’s house when she was 16, that he had photographed her naked, and that he had attempted to rape her. Dershowitz sent the lead investigator a letter intended to call into question her character, culling information from her social media accounts.

“She, herself, has chosen to go by the nickname of ‘pimp juice’ and the site goes on to detail, including photos, her apparent fascination with marijuana,” the letter read, according to Bruck. Dershowitz said he did not gather information from social media, and that someone else composed the letter, but it was signed by him.

Ultimately, Epstein’s legal team arrived at a “non-prosecution agreement” with the office of the US attorney in Miami, then led by Alexander Acosta, who went on to become President Trump’s secretary of labor (he announced his resignation earlier this month after criticism of his role in the Epstein case). Under the deal, Epstein spent 13 months in jail and was able to go on work release to a nearby office — where, according to an attorney representing his accusers, he was able to continue preying on women.

However, Epstein was arrested again at a New Jersey airport earlier this month and charged with sex trafficking; he was denied bail and is in jail in New York awaiting trial.

One of Epstein’s accusers says Dershowitz abused her too

Dershowitz has written that he hesitated to defend Epstein because he was an “acquaintance,” Bruck writes. He told the New Yorker reporter that Epstein had misrepresented the allegations against him, telling Dershowitz that “there were only half a dozen accusers who were under the age” and that “they slipped through the cracks—they presented fake I.D.”

“When I later learned the extent of this, I was shocked,” he told Bruck.

But one woman, Virginia Roberts Giuffre, says she was trafficked by Epstein to Dershowitz. Giuffre told Bruck that she began visiting Epstein’s Palm Beach mansion in 2000, when she was not quite seventeen. She was expected to have sex with Epstein multiple times a day, she said, and she wrote in court documents that she was “required to be sexually exploited by Defendant’s adult male peers.” That included Dershowitz. Giuffre “asserted that she’d had sex with Dershowitz at least six times, in Epstein’s various residences, on his island, in a car, and on his plane,” Bruck writes.

Dershowitz denied Giuffre’s claims, calling her a “prostitute” and a “bad mother” to her children, Bruck writes. Dershowitz also denied her claims to Vox.

Meanwhile, another woman, Sarah Ransome, says in court documents that she also had sex with Dershowitz at Epstein’s behest, though she was in her twenties at the time. Dershowitz says he never met her.

According to Bruck, Ransome also suggested to the New York Post in 2016 that she had tapes of herself having sex with prominent men, including Al Gore and Bill Clinton. She couldn’t produce those tapes, and she told Bruck she had invented them to draw attention to Epstein’s behavior, and to make him think she had “evidence that would come out if he harmed me.”

In an interview with Vox, Dershowitz said “the most important thing in the Connie Bruck article” was the statement by Ransome that she had invented the existence of the tapes. The fact that she admitted that invention “it seems to me disqualifies her as a witness,” Dershowitz said.

Bruck also makes the case that Dershowitz has long been interested in the defense of men accused of sex crimes. In a 1992 book, he wrote, “It is precisely because rape is so serious a crime that falsely accusing someone of rape should be regarded as an extremely serious crime as well.”

A former Harvard student told Bruck that in class, “He had convoluted ways of thinking about how men could misinterpret lack of consent. And it wasn’t relegated to when we were speaking about a rape case. Wherever we were on the syllabus, he would bring it up.”

Another student said that at one point, a female classmate “raised her hand and said, essentially, O.K., enough rape examples! There are women in this class who have been raped. Can we move on to something else?”

Dershowitz told Vox he taught about rape “in exact proportion” to the amount it came up in the casebook. He said that some events the former students described didn’t happen, like a student saying there was too much discussion of rape.

However, he said there were “always a small group of students who didn’t like the way I taught rape because I didn’t toe any lines.”

“If students were afraid to challenge orthodoxies,” he said, he would have to do it himself. He added that he also brought in prosecutors who handled rape cases, to present their expertise.

Even today, Dershowitz continues to defend his most controversial stances

In 1997, Dershowitz argued against statutory rape laws, saying the age of consent should be 15, Bruck reports. “There must be criminal sanctions against sex with very young children, but it is doubtful whether such sanctions should apply to teenagers above the age of puberty, since voluntary sex is so common in their age group,” he wrote in a Los Angeles Times op-ed.

Some people who know Dershowitz told Bruck they believe his insistence on defending himself — and attacking his critics — in public has backfired on him. “He created the issue by his attacks on Virginia Giuffre,” one colleague said. “It would have been better to let the allegation die of its own weight.”

The rise of #MeToo has exposed the way that wealthy and well-connected men can manipulate the legal system to avoid consequences for allegations of sexual assault. In defending Epstein — and getting him a non-prosecution agreement, possibly allowing him to offend again — Dershowitz became part of that story. He has every reason to keep a low profile.

But, Dershowitz told Vox, “the goal of the New Yorker article was to silence me,” and he refuses to be silent.

“I believe in the marketplace of ideas,” he said. “I am a crime victim, and crime victims should speak out.”