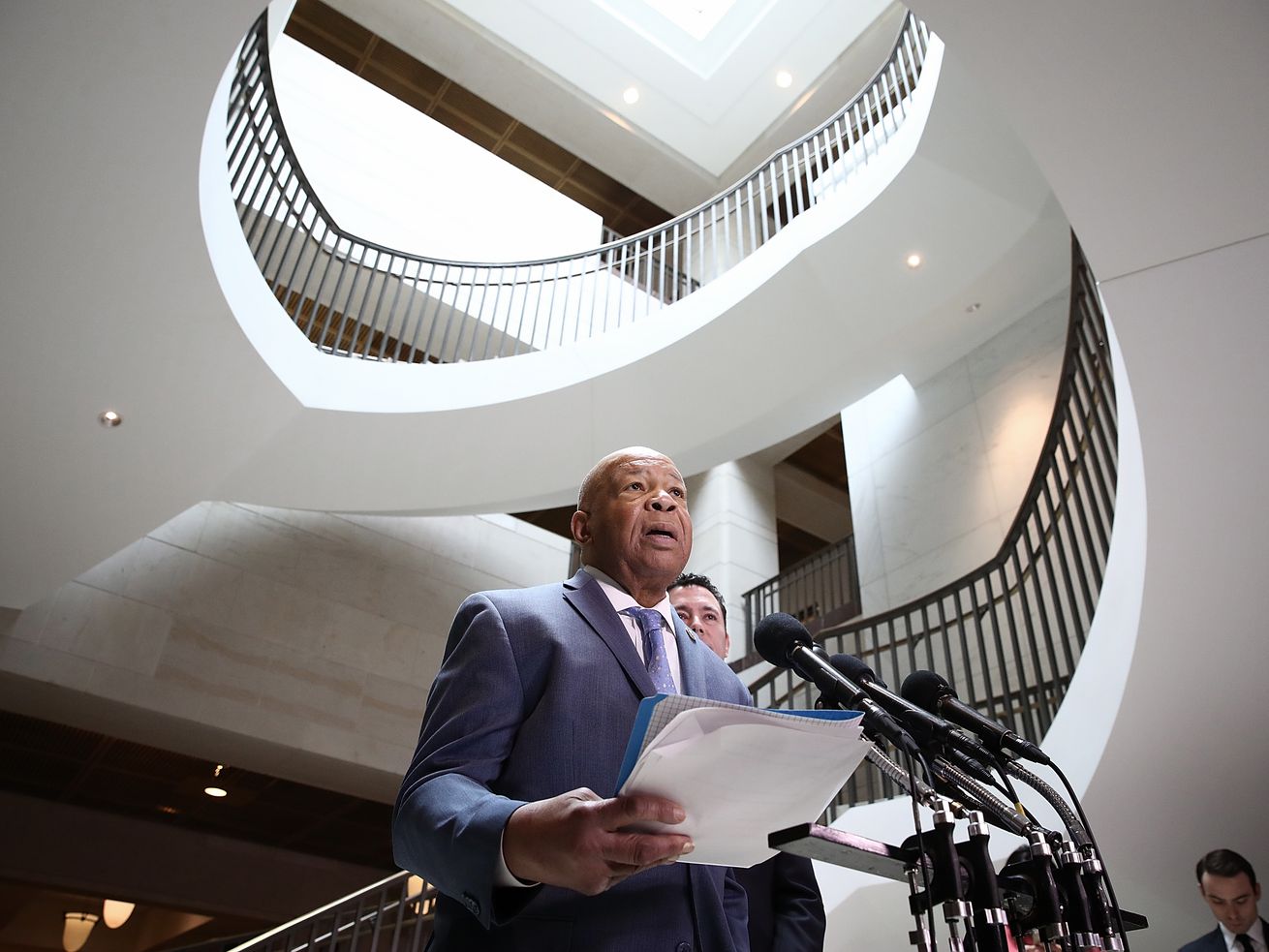 President Donald Trump lashed out against Rep. Elijah Cummings in a series of tweets on Saturday, calling the Maryland congressman “a brutal bully” and the majority-black district he represents “disgusting.”

The early morning screed against Cummings, who chairs the House Oversight Committee, appeared to be in response to Cummings’s criticism of policies at the border during recent hearings. It also follows Cummings calling on Americans to “pay attention to what is going on” and to protect democracy in the wake of special counsel Robert Mueller’s testimony Wednesday.

“Elijah Cummings has been a brutal bully, shouting and screaming at the great men & women of Border Patrol about conditions at the Southern Border, when actually his Baltimore district is FAR WORSE and more dangerous,” Trump wrote during Saturday morning’s tweetstorm.

He went on to call Cummings’s district the “worst in the USA,” a “rat and rodent infested mess,” and a “dangerous & filthy place.” Trump also accused the congressman of corruption.

Rep, Elijah Cummings has been a brutal bully, shouting and screaming at the great men & women of Border Patrol about conditions at the Southern Border, when actually his Baltimore district is FAR WORSE and more dangerous. His district is considered the Worst in the USA……

Why is so much money sent to the Elijah Cummings district when it is considered the worst run and most dangerous anywhere in the United States. No human being would want to live there. Where is all this money going? How much is stolen? Investigate this corrupt mess immediately!

In response, Cummings tweeted: “Mr. President, I go home to my district daily. Each morning, I wake up, and I go and fight for my neighbors. It is my constitutional duty to conduct oversight of the Executive Branch.” He then called on the president to support legislation lowering prescription drug prices.

Mr. President, I go home to my district daily. Each morning, I wake up, and I go and fight for my neighbors.

It is my constitutional duty to conduct oversight of the Executive Branch. But, it is my moral duty to fight for my constituents.

Just yesterday, I held a hearing on the skyrocketing prices of prescription drugs and the financial hardships that families across the nation, and in Baltimore, are facing.

Mr. President, we can address this together. Two years ago, I went to the White House to ask you to endorse my bill to let the government negotiate directly for lower drug prices.

In one of his tweets, he told the progressive lawmakers — American citizens, three natively born and one a refugee — to “go back” to the “crime infested” countries they’d come from. Those messages sparked national outrage and prompted the House to pass a resolution formally condemning his remarks.

Critics denounced those tweets as racist, and on Saturday the response to Trump’s attack on Cummings was much the same. House Speaker Nancy Pelosi tweeted that “We all reject racist attacks against him and support his steadfast leadership.”

.@RepCummings is a champion in the Congress and the country for civil rights and economic justice, a beloved leader in Baltimore, and deeply valued colleague. We all reject racist attacks against him and support his steadfast leadership. #ElijahCummingsIsAPatriot https://t.co/2LG8AuQrHh

And members of the Squad weighed in, too:

.@RepCummings is an exemplary public servant. He fights for the left behind & unheard. Clearly the Occupant of the White House is intimidated by someone who is holding him accountable and exposing his abuses of power. The Chairman is effective& efficient in the pursuit of justice

By the end of the mtg, I had no idea if I made the cut.

If you look at Oversight, it includes many all-stars of Congress.

From @RepRaskin to @RoKhanna, Cummings is a legendary coach who brings the best out of everyone.

He makes the country better. You want to be on his team.

Elijah Cummings grew up facing racist bullies like Trump and learned to confront them with qualities unknown to Trump: courage and integrity. The great people of Baltimore have something Trump craves but will never have as he degrades the Office of the President: dignity.

And the mayor of Baltimore released a statement calling Trump’s statement “hurtful and dangerous” and defending Cummings as a “patriot and a hero.”

Baltimore Mayor Bernard C. “Jack” Young: “It’s completely unacceptable for the political leader of our country to denigrate a vibrant American City like Baltimore, and to viciously attack U.S. Representative Elijah Cummings a patriot and a hero.” pic.twitter.com/f3JsgUHmeY

Trump and Cummings have been at odds before. In 2017, the president claimed that the congressman had privately told him, “You will go down as one of the great presidents in the history of our country.”

Cummings disputed that version of events: “I have said repeatedly that he could be a great president if — if — he takes steps to truly represent all Americans rather than continuing on the divisive and harmful path he is currently on.”

But it is unclear what, exactly, sparked the degree of vitriol that appeared on the president’s Twitter feed on Saturday.

It may have been in reaction to a July 18 hearing about conditions in border detention facilities. After acting homeland security secretary Kevin McAleenan said that his agency was doing its “level best,” Cummings’s tone shifted: “What does that mean? What does that mean? When a child is sitting in their own feces, can’t take a shower?” he asked. “None of us would have our children in that position. They are human beings.”

Trump may have also been frustrated with Cummings’s comments following Mueller’s testimony.

While both could have been on his mind, as many (including Media Matters’ Matthew Gertz and The New York Times) have pointed out, Trump’s tweets were sent after a segment comparing conditions in Baltimore to the southern border aired on Fox & Friends, a favorite show of the president’s, early on Saturday morning.

This would not be the first time the president was influenced by a Fox News segment; in early July he threatened to investigate Google following a piece on the network critical of the company, and as Gertz notes, Trump’s racist squad tweets seemed to be issued after they were attacked on Fox as well.

Trump has made similar statements before, and they play well with his base

Cummings has served as the representative for Maryland’s 7th District since 1996, when his predecessor, Kweisi Mfume, stepped down to serve as president of the NAACP. The district, which encompasses middle- and upper-class suburbs as well as parts of Baltimore, has been majority-African American since 1973. According to Census data, it is currently 53 percent African American, with a median household income higher than the national average.

This is not the first time that Trump has used racist language and invoked images of crime and poverty when describing black communities. When Rep. John Lewis (D-GA) declined to attend the presidential inauguration in 2017, the then-president-elect said that the congressman, a civil rights icon, “should spend more time on fixing and helping his district, which is in horrible shape and falling apart.” Last year, he referred to Haiti and several nations in Africa as “shithole countries” as he sought to slow migration from those places.

Vox’s Aaron Rupar pointed out on Twitter that Trump “uses the language of ‘infestation’ when talking about places populated by black and brown people:”

Trump only uses the language of “infestation” when talking about places populated by black and brown people pic.twitter.com/RW58qgWFcm

And CNN host Victor Blackwell made a similar argument Saturday morning. The Baltimore native became visibly emotional as he responded to the portion of Trump’s tweet that said that “no human would want to live” in Cummings’ district.

“You know who did [live there], Mr. President? I did,” Blackwell said. “People get up and go to work there. They care for their families there. They love their children who pledge allegiance to the flag, just like people who live in districts of congressmen who support you, sir. They are Americans too.”

President Trump tweeted that Rep. Elijah Cummings’ district is a “rodent infested mess” where “no human being would want to live.”

“When he tweets about infestation, it’s about black and brown people,” Blackwell says. pic.twitter.com/VeCIIvQ4SJ

But while many of Trump’s opponents expressed outrage and anger, it is worth noting that Trump’s base is energized by this style of attack.

Following the attacks on the Squad, Trump attended a rally during which, for 13 seconds, the crowd chanted “Send her back!” And a USA Today/Ipsos poll conducted in the days following Trump’s racist Squad tweets found 57 percent of Republicans agreed with Trump’s words. A Reuters poll found Trump’s approval among Republicans went up 5 points following the tweets.

As Vox’s Matthew Yglesias explains, Trump’s racist attacks on lawmakers of color may be part of a strategy to leverage racial conflict and win white voters:

Arguments about the minimum wage or rolling back fuel efficiency standards or even identity-related issues focused on abortion or LGBTQ rights are more comfortable terrain for many Democrats for basic mathematical reasons. Most Americans aren’t rich. Most Americans these days aren’t highly observant Christians. Big political conflicts about these topics position Democrats are defending the interests of the majority group against the GOP’s support for a minority group. Arguments about race and racism do the reverse — most American voters are white, and for that reason, Democrats have traditionally tried to reduce the salience of racial conflict in American politics.

Much of Trump’s politics is essentially dedicated to making that kind of deracialization strategy untenable, with actions and rhetoric that are so inflammatory that they inescapably push racial conflict to the top of the agenda.

Trump’s racist rhetoric also has the opposite effect. It unites Democrats of different ideological stripes around a common foe. But it also resonates with people of color on a personal level. Following the president’s attack on the squad, many shared stories of hearing, implicitly or explicitly, similar sentiments. One person who shared such a story was Rep. Elijah Cummings himself.

Speaking Sunday on ABC’s The Week, he said the president’s remarks reminded him of his own experiences when attempting to integrate a swimming pool in Baltimore as a child.

“I heard the same kind of chants, ‘Go home, you don’t belong here,’” he said. “When the president does these things, it brings up the same feelings that I had over 50 some years ago, and it’s very, very painful.”