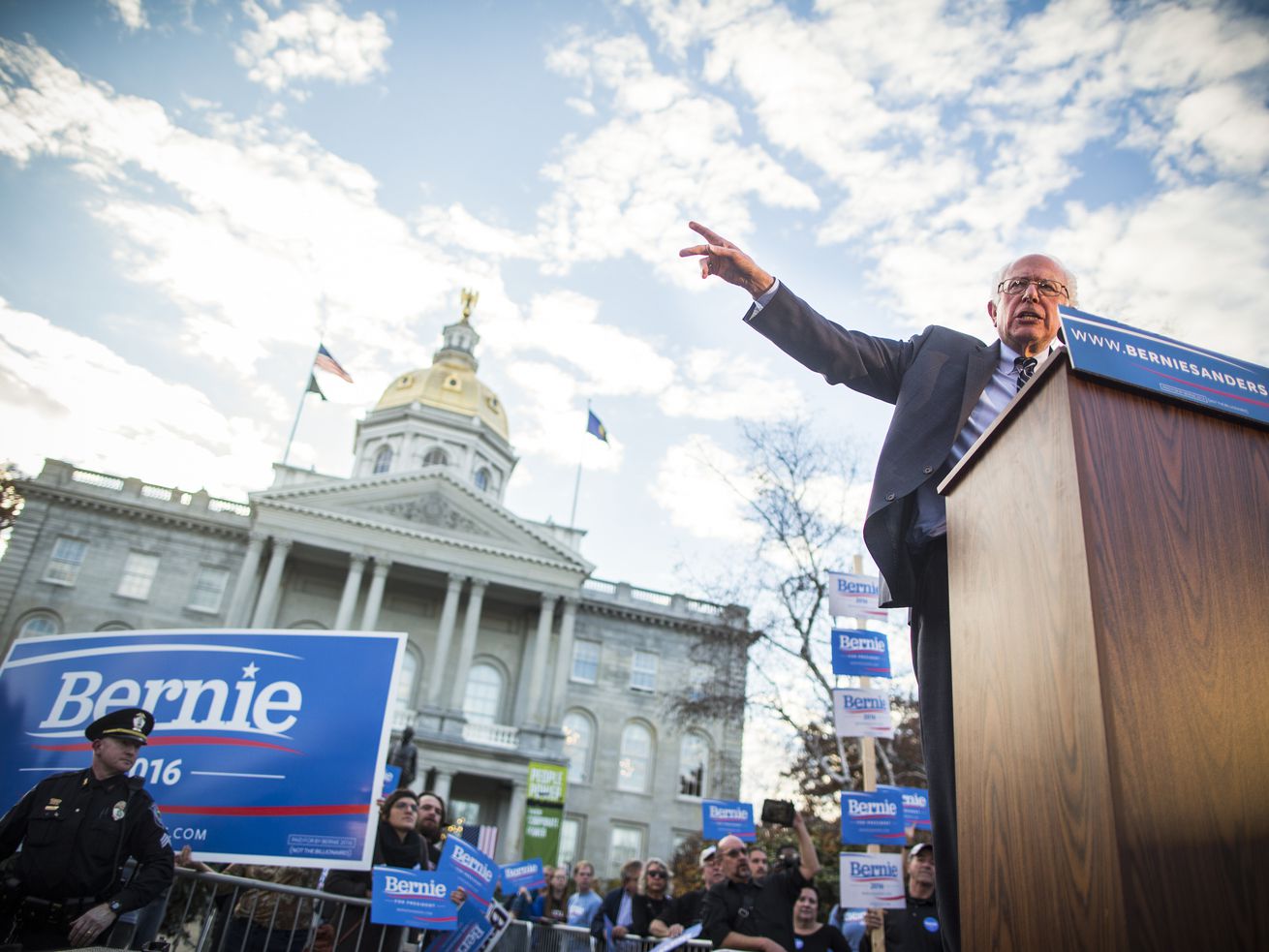 Sen. Bernie Sanders (I-VT) speaks at a 2016 campaign rally outside the New Hampshire Statehouse, after filing the paperwork for his candidacy on November 5, 2015.

What the latest polls mean for Bernie in New Hampshire.

DURHAM, NH — Bernie Sanders needs to win in New Hampshire to get the Democratic nomination — but his victory there is far from assured.

A recent poll from Saint Anselm College, which surveyed 351 registered voters from July 10 to 12, showed Sanders slipping into fifth place, with Harris surging to second behind Biden after the first Democratic debate.

But another New Hampshire poll, conducted by CNN and released within 24 hours of the Saint Anselm one, suggested Sanders is still riding comfortably in second place behind former Vice President Joe Biden. CNN’s poll showed Sanders tied for second place with Sen. Elizabeth Warren, who is enjoying a steady climb in the Granite State.

“I find it very hard to see him winning the nomination if he doesn’t succeed in New Hampshire,” Mark Longabaugh, a former top Sanders strategist who helped mastermind the 2016 campaign in the state, told me in April.

The first-in-the-nation primary, which comes eight days after the Iowa caucuses, is crucial for Sanders. As the CNN poll indicates, New Hampshire so far mirrors the national competition — Biden leading everyone, followed by Sanders, Warren, and fellow Sen. Kamala Harris. South Bend, Indiana, Mayor Pete Buttigieg is also in the mix. But Sanders’ campaign is casting doubt on the Saint Anselm poll suggesting a slip.

“I saw that poll. You know what that poll has me among young people? 3.4 percent,” Sanders told the Washington Post’s Robert Costa during a Tuesday interview. “That poll is a bad poll.”

“We are focused on doing what we need to do to win and not focusing on polls that have some serious flaws in their methodology,” Stevenson told Vox. “We’re focused on organizing, knocking on doors, talking to voters. Just this weekend, we knocked on 2,300 doors.”

Sanders’ chief suspicion with the Saint Anselm poll was that it showed him doing poorly among young people, a group that helped propel him forward in 2016. But if youth enthusiasm for Sanders seriously flags in New Hampshire and nationwide, he could be in trouble.

In 2016, Sanders took the New Hampshire primary by storm with a resounding 22-point win. Four years later, the progressive icon starting his second presidential bid battling Biden, Warren, and Harris for frontrunner status. He’s a far cry from an underdog, but the race is no longer a binary choice between Hillary Clinton and him. The “fringe” ideas he ran on in 2016 — Medicare for all, debt-free college, and a $15 minimum wage — have been embraced by a number of his competitors.

The Saint Anselm poll is a dramatic change from an April Emerson College national poll that put Sanders ahead of Biden in the Granite State. But it’s still relatively early and New Hampshire voters are famously fickle and prone to making up their minds at the last minute. Poll after poll shows the vast majority of voters are still shopping around for a candidate to support.

Sanders has set up massive expectations. The ultimate test for his campaign is if he can deliver.

Sanders’s worst enemy in 2020 could be high expectations. If he gets too comfortable and fails to win or come in a strong second in New Hampshire, it could badly weaken his candidacy. And he’s the only Democrat in a massive field with a past record to be compared to.

Small, overwhelming white, and politically independent New Hampshire leaned heavily into Sanders’s populist fervor in 2016. His massive rallies tapped into a raw energy full of resentment and distrust with the moneyed political establishment. Sanders, like Republican primary winner Donald Trump, appealed to New Hampshire voters who wanted to blow up the system and start over.

Sanders didn’t just win New Hampshire in 2016; he captured more than 152,000 votes, setting a new record in the state for the most votes received by any candidate, Republican or Democrat.

“To get 150,000 votes in the New Hampshire primary is unbelievable,” said Tad Devine, Sanders’s chief strategist during his 2016 campaign. “That’s really what launched him on the process that made him go all the way to California.”

“He’s cursed with the perception of the frontrunner,” said Tom Rath, a Republican strategist in New Hampshire who advised Mitt Romney’s 2012 campaign. “It sets certain expectations, both in New Hampshire and beyond, as to how he’s going to perform, and you cannot take New Hampshire for granted.”

Bernieworld seems bullish on Sanders’s 2020 odds, believing he needs to stumble badly in order to lose New Hampshire. They’re already working to build a large grassroots operation driven by in-state volunteers and have a notable advantage in the infrastructure from Sanders’s previous campaign.

How things could go wrong for Sanders

New Hampshire’s college students and young voters helped put Sanders over the top in 2016, but he may not be able to rely on that support through 2020.

With more than 20 candidates to choose from, voters are still shopping around. On a recent April morning, the lampposts outside the University of New Hampshire’s student library had no Bernie stickers — just one for “Pete 2020.” The young mayor of South Bend was in third but has slipped to fourth place in New Hampshire, according to the Saint Anselm poll. Buttigieg also tied Sanders for second place in an April Suffolk University/Boston Globe poll of the state, both trailing behind Biden.

If Sanders really is flagging among young people, it could spell doom. Students at the University of New Hampshire, Keene State College, and Dartmouth College told me in April they are somewhat overwhelmed by their choices this cycle, and they aren’t ready to pin their hopes on Sanders again.

“It’s not totally devoid of enthusiasm for him, but I’m pretty certain he’s not the number one choice of our activists,” said Michael Parsons, a student at Dartmouth College and executive director of Dartmouth College Democrats. Beyond students who belong to the Democratic Socialists of America and are sold on Sanders, many other young Democrats on campus are keeping their options open, Parsons said.

There’s another problem that could eat into candidates’ support from young voters: a new state law passed by Republicans in 2018 that effectively prevents out-of-state college students from voting in New Hampshire elections.

The law requires prospective voters to declare New Hampshire as their state of residency 60 days before they vote. That means they would be subject to other requirements, like getting a New Hampshire driver’s license and car registration before voting. Before the law was enacted, students had to prove they lived in the state by bringing their licenses and other proof of residency, like mail or records showing their on-campus address. Students and voting activists alike object to the new rules in the state, characterizing it as a “poll tax” that makes voting financially untenable for students who can’t afford the fees for a new license and registration.

The issue got some national attention after Sen. Jeanne Shaheen (D-NH) asked 2020 candidates to take a stand on the law. Sanders called it “cowardly” during a CNN town hall in Manchester. The state’s newly Democratic-controlled legislature is trying to pass bills to reverse the changes, but those efforts are unlikely to get support from Republican Gov. Chris Sununu.

College students and young voters ultimately may not matter too much in the primary — they are a smaller and less reliable bloc compared to older voters. Exit polls show Sanders also did well with middle-aged voters in 2016, but potential problems in 2020 may lie more in the different makeup of the field. Sanders shouldn’t assume that New Hampshire votes are still sold. He also hasn’t traveled to the state nearly as much as Warren in 2020; since his initial launch there, he’s returned just once for a CNN town hall.

“I would be very cautious about saying he’s a shoo-in or they should feel a level of confidence they will do as well as they would last time,” said Smith.

Warren also enjoys broad support among the party’s progressive wing and holds similar views to Sanders on taxing ultra-millionaires and billionaires to generate money for sweeping social programs. And New Hampshire voters are appearing to pay attention; Warren is a close third behind Kamala Harris in the Saint Anselm poll and was third behind Sanders in a June CBS/YouGov poll of New Hampshire voters.

Warren has visited the state frequently since she launched her campaign, has hired a number of experienced New Hampshire political operatives, and is plotting an aggressive grassroots strategy in the state. With the tagline “Warren has a plan for that,” the Massachusetts senator has also carved out a niche for herself as the policy machine of 2020, releasing sweeping and detailed progressive proposals — one after the other.

Warren rolled out a plan to wipe away the vast majority of America’s student debt and create debt-free college for public universities right before an April CNN town hall in Manchester where college students filled the audience. Her plan would cancel up to $50,000 in student loan debt for an estimated 42 million Americans. It comes with a hefty price tag — $1.25 trillion over 10 years — that she plans to pay for with the ultra-millionaire tax she introduced in January.

Warren’s slow but steady rise again mirrors the national picture. Initial fears about her electability against Trump are still part of the national conversation but may be fading more in the minds of voters. An April Suffolk poll of New Hampshire voters showed voters were still worried she couldn’t beat President Trump in a general election.

“She is well-known, and yet she doesn’t seem to have the liftoff that she ought to given how comfortable she is here,” Rath observed.

But Warren has also proved the enthusiasm for her policy-focused campaign isn’t just a flash in the pan. And if Sanders stumbles for whatever reason, Warren could be in a prime position to snag voters who cast ballots for him in 2016.

“I think it’s more prudent at this point to keep an open mind about Warren,” Scala said. “She certainly stands to be next in line for a good portion of the Sanders vote if Sanders ultimately fades.”