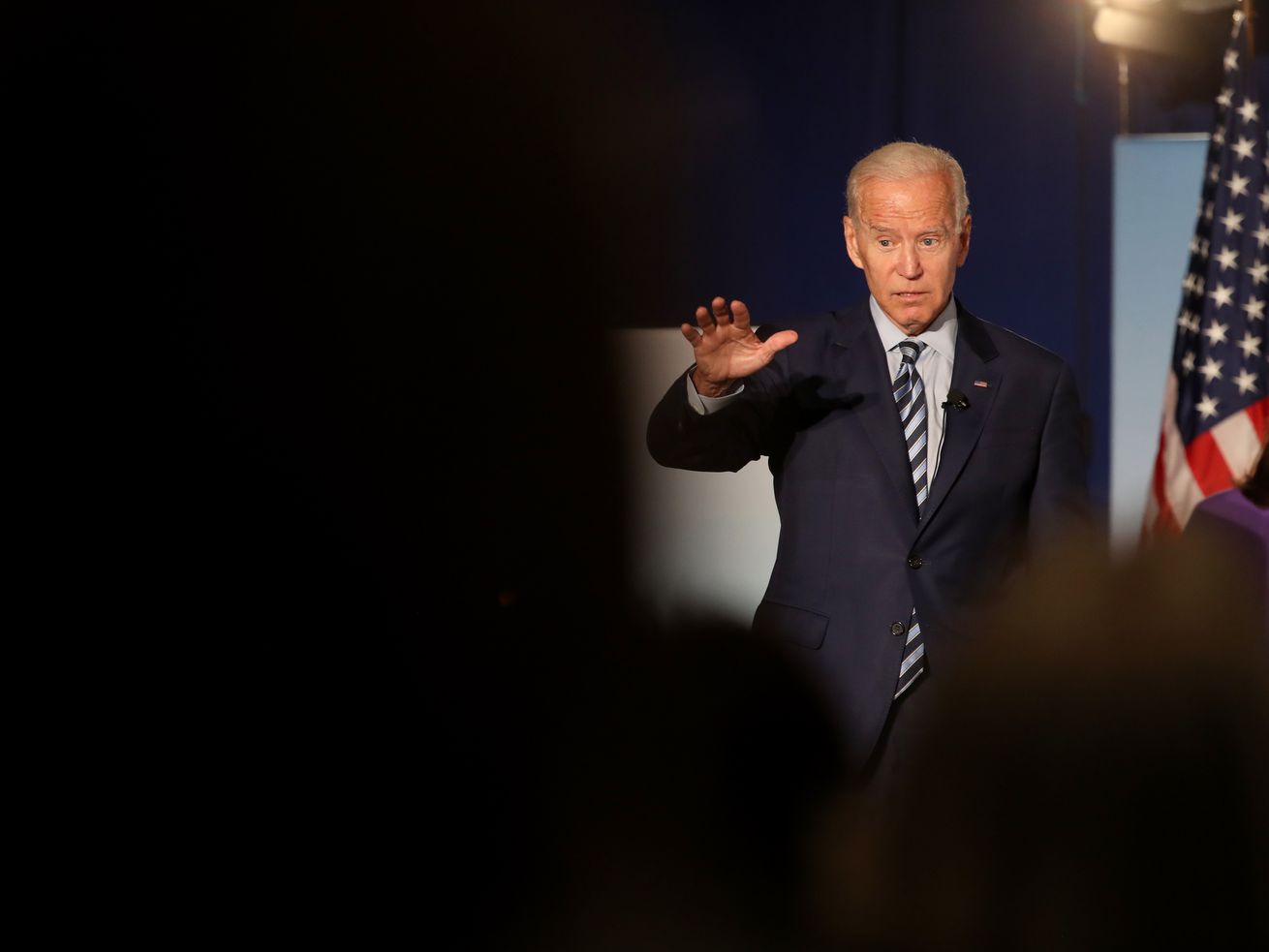 It’s not Medicare-for-all, but if it happened it would be a big, um, deal.

Joe Biden has a health care plan that, while not going nearly as far as “Medicare for all” in initiating a single big-bang transformation of the American health care system, would nonetheless, if implemented, arguably be the most dramatic piece of new social legislation since the Great Society.

Interestingly, both due to the contrast with the even more dramatic plans endorsed by some of his rivals and the political imperative to brandish his relationship with Barack Obama, Biden’s rhetoric around his plan underplays exactly how big of a deal it would be.

In a video released alongside the plan, Biden is extremely unsubtle in his repeated invocations of Obama and in his efforts to portray Medicare-for-all, most notably endorsed by rival Bernie Sanders, as a form of Obamacare repeal. He says instead that he wants to “build on” what Obama did by “adding a public option to Obamacare as the best way to lower costs and cover everyone.”

But the form of public option described in a fact sheet about the plan that the Biden campaign released to reporters is considerably more ambitious than the public option that was considered — and ultimately rejected — by congressional Democrats during the ACA debate.

The main difference between Biden’s plan and Medicare-for-all is a BidenCare transition that would be more gradual and much less costly in terms of explicit tax increases. That likely makes it more politically palatable (though still almost certainly unrealistic in terms of congressional politics) but also much less likely to deliver some of the simplification and cost containment benefits of Medicare-for-all.

All told, however, both Biden and his more progressive rivals are somewhat downplaying exactly how much more left wing than the ACA this idea is — while the industry groups, facing a different set of incentives, are having a more telling reaction.

BidenCare is not Medicare-for-all, but make no mistake, if it were somehow to happen, it would be a really big deal.

Create a public option open to all Americans

You may recall the term “public option” from the legislative debate over the Affordable Care Act. House Democrats, at the urging of progressives and with the nominal support of the White House, wrote a version of the bill that would have ensured that people buying insurance on health care exchanges had the option of picking a government-run insurance plan. This would have avoided the situation where some counties enjoy little to no competition between insurance providers and somewhat diminished the sting of the idea of mandatory insurance purchases.

For most people, however, it wouldn’t have made any difference at all, because over 90 percent of the insured population don’t buy insurance on the exchange.

What Biden is now proposing is different. According to his campaign, “whether you’re covered through your employer, buying your insurance on your own, or going without coverage altogether, the Biden Plan will give you the choice to purchase a public health insurance option like Medicare.”

Everyone, in other words, will have the option to enroll in the public option with potentially big implications for how employers decide to structure their health benefits. And the campaign further state that “as in Medicare, the Biden public option will reduce costs for patients by negotiating lower prices from hospitals and other health care providers.”

Medicare pays lower unit prices than almost any private health insurance plan because it’s such a big program that it’s able to drive a very hard bargain. Biden is promising to unleash that same bargaining power on behalf of a public option available to all Americans — which should generate an insurance option that is cheaper for patients and stingier to providers. That’s why the Partnership for America’s Health Care Future — a joint venture of the American Medical Association, the American Hospital Association, and a bunch of other health industry groups — don’t like it. Industry likes the idea of government-subsidized health care but hates the idea of government-orchestrated bargaining over prices.

But that’s why Biden’s proposal would be a much bigger deal than the hypothetical ACA public option. By using Medicare purchasing power, the public option would deliver lower premiums, which would make it a very attractive option for all kinds of people who currently have private insurance. Nobody would be “forced” onto the public plan, but in practice lots of people would opt for it.

And given that reality, lots of corporate HR departments might decide to cut back on their health care offerings — just giving workers money and assuming they can use some of it to enroll in the public option. This of course could happen, in theory, under the existing ACA framework. But that program is set up, by design, to ensure that there’s no particular upside to going that route.

The public option, by contrast, would offer lower premiums than existing private options and make the exchanges much more attractive. This public option, in short, would not just “build on” Obamacare but potentially transcend it over time. If, that is, Congress would go for it. Meanwhile, several of Biden’s other ideas do seem more targeted at incremental change.

At the time of its drafting, the ACA’s authors in Congress and in the White House had two big concerns that profoundly shaped the bill.

That led to the ACA’s provision of subsidies for people to buy insurance on the exchanges to be stingy in two ways that Biden wants to change.

First, while subsidies are pretty generous for the near-poor, they get modest very quickly and phase out entirely at 400 percent of the Federal Poverty Level — i.e., about $100,000 a year for a family of four. Second, the subsidies are scaled to the expectation that consumers will buy a “silver”-rated health plan that typically comes with relatively high deductibles and copayments.

The ACA guarantees that preventative health care services must be provided with no patient cost-sharing, but its authors were motivated in part by the view that outside of the preventative realm, Americans use too many health care services and should be encouraged to enroll in high-deductible plans that would offer insurance against catastrophic financial loss while discouraging the casual use of non-preventative medicine.

Biden proposes to make this whole scheme more generous across several dimensions, first by switching to the use of “gold” plans as the benchmark (meaning lower deductibles and copayments), second by making subsidies more generous across the board by reducing the share of family income that’s supposed to go to premiums, and third by eliminating the cap on financial assistance so even more comfortable families would get at least some help from the government.

Biden’s team estimates that making the ACA more generous in this way can be paid for through higher capital gains taxes on the rich. This set of tweaks does not really lend itself to an easy obvious slogan. But it avoids middle-class tax hikes, addresses patients’ core complaint about the ACA, and unlike the public option would be welcomed by health care providers. It would not, however, do much of anything to help the majority of people who still get employer-provided insurance. For them, Biden offers a set of new consumer protections.

A crackdown on pharmaceutical pricing and surprise billing

“Surprise” medical bills that leave consumers stuck with potentially tens of thousands of dollars in ER bills they had no ability to avoid have attracted increasing political attention in the past couple of years, thanks in part to Sarah Kliff’s reporting for Vox.

Biden proposes to tackle this with a new rule that would bar providers from charging out-of-network rates in situations (like emergency surgery) when a patient has no choice over which provider she sees. Biden also promises to engage in more vigorous enforcement of existing antitrust legislation in order to block provider concentration to bring prices down.

On the pharmaceutical front, meanwhile, Biden proposes a whole suite of measures to reduce prices, including allowing Medicare to negotiate bulk purchasing discounts, allowing consumers to buy cheap drugs from foreign countries that impose price controls, capping drug price increases at the overall rate of inflation, and a number of ideas designed to spur increased production of generic competition for out-of-patent medications.

No one idea here is a game-changer, but the basic concept is to tackle a number of pain points that arise throughout the system for everyday consumers.

Biden’s approach: do the most popular stuff

The Affordable Care Act itself was, like any piece of complicated legislation, itself a compromise measure reflecting a number of different interest group, ideological, public opinion, and pragmatic imperatives.

It sought to massively expand health insurance coverage in America in a way that health providers would cheer, while simultaneously achieving technocratic goals relating to reducing the growth rate of national health expenditures. On its own terms, this worked. Insurance coverage expanded considerably, health care providers supported the bill and opposed its repeal, and the cost curve did bend.

But achieving that triad of goals did not generate bipartisan support for the legislation in Congress at the time, and even though repeal was successfully averted, the reality of implementation has not stopped Republicans from launching multi-pronged attacks on the law. Nor, obviously, has the existence of the ACA framework quelled the left’s basic philosophical objection to a segmented health care system in which for-profit companies play a large role and where quality of care is still closely linked to ability to pay.

Under the circumstances, Biden “builds on” the ACA framework largely by relaxing the concerns about industry buy-in and patient overutilization.

Instead, he offers a series of crowd-pleasing ideas designed to make health care prices lower by squeezing providers and have patients pick up a smaller share of the tab by offering more generous subsidies. That accepts the left’s basic diagnosis of the health care situation — the government should step in to make things better with a mix of price controls and subsidies — while trying to step gingerly around the public opinion land mines involved in middle-class tax hikes and banning private insurance.

The result is a proposal that is hard to economically summarize, that lacks the conceptual elegance of Medicare-for-all, and that will almost certainly provoke maximum opposition from industry groups and congressional Republicans. The upside is that for the vast majority of Americans, Biden’s plan offers some concrete upside paired with essentially no downside for anyone other than industry insiders and a small handful of very rich people.