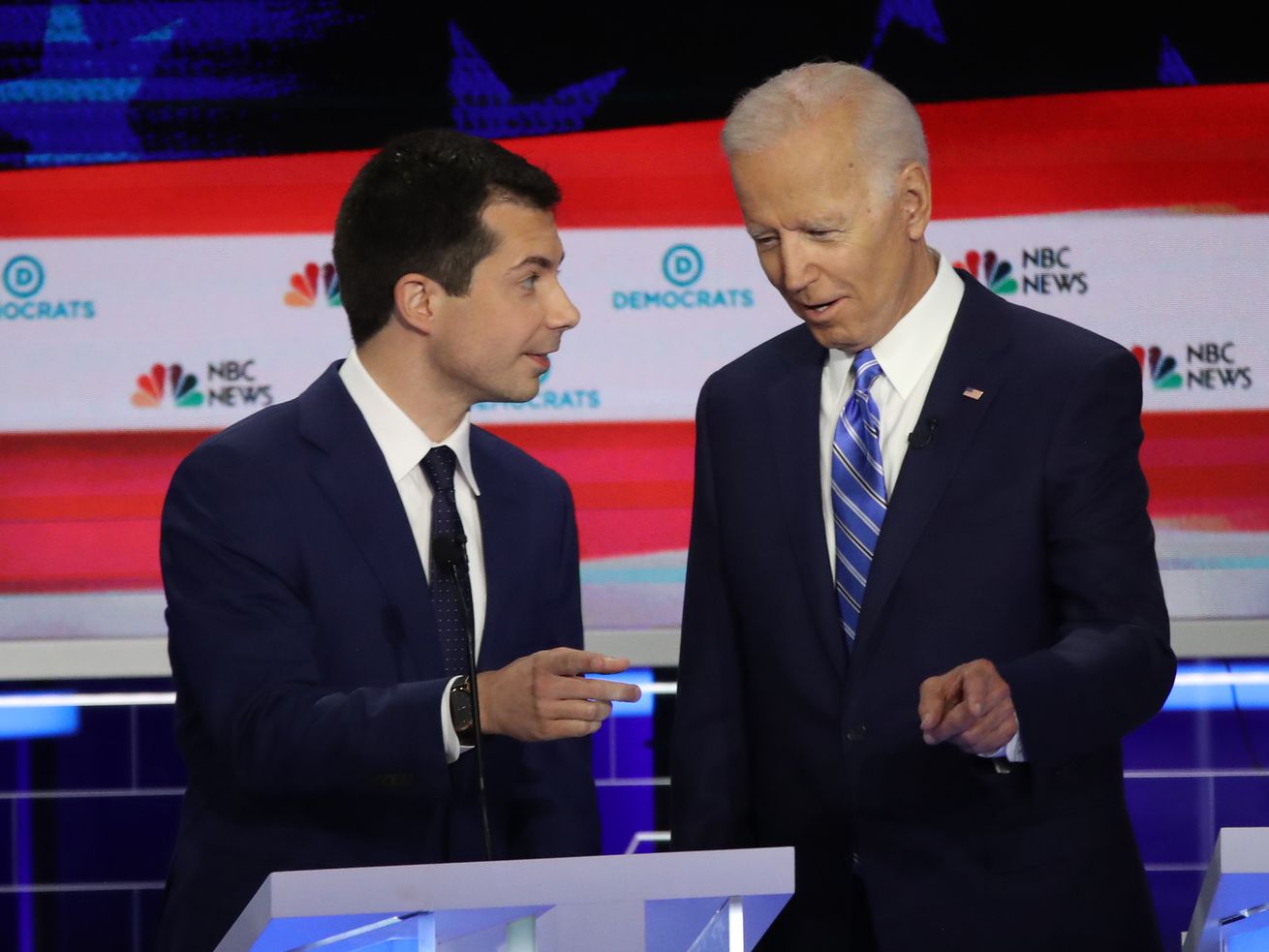 Biden is no dominant frontrunner, and other takeaways from the latest filings.

The clearest takeaway from Democratic candidates’ second quarter fundraising numbers is that, like the polling, campaign money is coalescing around five particular contenders.

These five were the only five candidates to raise more than $11 million in the second quarter of 2019 (between April 1 and June 30). And there is significant distance between them and the rest of the candidates — everyone else raised $4.5 million or below in contributions.

Then, within that top tier, Biden isn’t looking like a particularly dominant frontrunner, Sanders has some good news and some bad news, Buttigieg is punching way above his weight. Meanwhile, Warren has pulled off a remarkable turnaround, while Harris still has some work to do.

All five of these candidates, though, have succeeded in standing out in a crowded field and look well-positioned to be competitive going forward. As for the rest…things aren’t looking so hot.

Joe Biden’s fundraising is fine, but considering his advantages, it’s not great

All year, Biden has been the frontrunner in the polls, and as a former vice president, he has a good claim to being the “next in line” for the nomination.

And yet he hasn’t managed to transmute those advantages into a true powerhouse of a campaign performance.

The fundraising numbers are the latest indication of this. This was Biden’s first quarter in the race, and he raised $22 million — making him second in contributions overall. But that puts the former vice president behind South Bend mayor Pete Buttigieg, who was unknown nationally until this year. (Buttigieg raised $24 million for the primary.) For comparison about what a dominant frontrunner’s fundraising looked like, Hillary Clinton raised $45 million in her first quarter in the race in 2015. (And even she ran into some trouble down the road.)

The news gets worse. Biden’s decision to wait until April to begin his campaign has put him into a bit of a hole. He ended June in fifth place for cash on hand, with $10.8 million. That puts him behind Sanders’s $27 million, Buttigieg’s $22.6 million, Warren’s $19.7 million, and Harris’s $13.2 million. Fifth place in cash on hand is certainly not where a strong frontrunner should be at this point.

Again, none of this is an utter disaster for Biden, but it’s not particularly impressive considering his advantages. Furthermore, since Biden is more dependent on big-donor fundraising than the other top-tier candidates, many of his supporters have already hit the $2,800 limit on what they can give him for the primary. So unless he broadens his fundraising base — either finding more and more rich people to pony up or striking more of a chord with small-dollar contributors — he could have trouble keeping up with the pack.

Sanders is in the midst of a rocky stretch in the campaign. After beginning the year as the clear second-place candidate behind Biden, national polls now show him in essentially a three-way tie for second, with Warren and Harris. He’s also gotten some concerning recent early state polls (fourth place in Iowa, fifth in New Hampshire).

Now, these fundraising numbers are a mixed bag for him. The good news for the Vermont senator is that he easily topped the field in cash on hand, with $27 million. To do so, though, he needed to transfer about $7.6 million that he had raised on previous fundraising contributions.

His new contributions of $18 million, though, put him at fourth place in the field — behind Buttigieg, Biden, and Warren (though still a ways ahead of Kamala Harris’s $11.8 million).

The fact that Sanders dropped slightly behind Warren is particularly interesting considering both candidates are heavily reliant on small donors. In the first quarter, Sanders was still the clear leader in this space — his small money haul nearly tripled that of any other Democrat. But this time around, Warren’s $12.7 million in unitemized (below $200) contributions was slightly above Sanders’s $12.5 million.

Sanders also spent the most of any Democratic candidate during the quarter, shelling out $14.1 million. His burn rate — how much he spent compared to new contributions he brought in — was 77 percent, also the highest of the top contenders. (Harris’s was next with 63 percent, then Warren with 55 percent, Biden with 48 percent, and Buttigieg’s 34 percent.)

At the end of the day, though, Sanders still ends the quarter with more cash on hand than any other candidate, which is a good place to be.

Pete Buttigieg is the fundraising star

The South Bend mayor topped the field by raising $24.9 million overall (though about $800,000 of that can only be used in the general election, should he make it there). In doing so he outraised several rivals who have been nationally known for years, including the former vice president of the United States, the 2016 runner-up for the nomination, and a senator from the nation’s largest state.

Obviously, that’s great for Buttigieg. His problem is that his polling news hasn’t been as great of late. Nationally, he’s clearly in fifth place, separated by several percentage points from the top four. And he’s gone from polling in third place in Iowa and New Hampshire to more often polling fourth or fifth lately. He has also often polled at 0 percent support among black voters, which is something he really needs to change if he hopes to win the Democratic nomination.

Buttigieg has also been running a relatively lean campaign — perhaps too lean, some of his supporters have worried. His 34 percent burn rate was the lowest of the top-tier contenders, and it’s so low because he waited for some time to staff up in the early states. But that’s changing, per Politico’s Daniel Strauss and Elena Schneider, who report that the campaign plans to grow to 300 staffers by Labor Day.

Harris’s fundraising was the weakest of the top tier

Kamala Harris’s breakout moment in the race so far occurred on June 27 during the night of the Democratic debate, when she confronted Biden on busing. Coming after a few months in which she rarely made headlines, the debate caused her to surge in polls and seemed to cement her place in the top tier of candidates.

The fundraising quarter ended just three days later, on June 30, so Harris didn’t have much time to capitalize on her performance. And indeed, she finished the quarter having raised $11.8 million, putting her fifth place overall, with easily the weakest performance among the top tier. (Sanders was in fourth with $18 million.)

Buttigieg and Biden trounced Harris in big-dollar fundraising, and she didn’t have the small-donor support that boosted Warren and Sanders. If that state of affairs continues, that will be a problem for Harris.

Still, around $3 million of that $11.8 million came in those few days after the debate. So the question is whether Harris will continue to raise money at a significantly improved rate going forward. If she can, she could be able to be compete with the top-tier fundraisers.

The conventional wisdom was that Elizabeth Warren’s first quarter in the presidential race was grim, if not an outright disaster. That extended to her fundraising, which wasn’t good — she raised a mere $6 million and her burn rate was an alarmingly high 87 percent. Her finance director even quit, out of disagreement with Warren’s strategy to avoid big-dollar fundraisers.

But at the time, I argued pundits shouldn’t be so quick to write her off. Fortunately for her, she had $10.4 million in her Senate campaign account, which she moved over to her presidential account. That meant the lights weren’t about to start going off in Warren’s campaign, and that she had ample time to try and turn her campaign around.

That’s exactly what happened in the second quarter. Warren focused on policy, effectively branding herself as the candidate with a substantive plan for (almost) everything, and a good chunk of Democratic voters responded. She began a steady climb in polls (she’s now tied for second nationally). And her fundraising hugely improved — she raised $19.1 million from April to June. As mentioned above, her small-donor haul even slightly topped Sanders’s.

Everybody else is in trouble

Eighteen other candidates in the race reported their fundraising numbers, and, well, they’re not as good. Here are the ranges (keeping in mind that Harris’s $11.8 million was the next highest result above Cory Booker’s):

Now, these candidates can take heart in Warren’s turnaround — she shows it’s possible to go from raising $6 million one quarter to $19 million the next. But few candidates are Elizabeth Warren. And the tough qualification rules for September’s third debate could limit many of them from further national exposure (after the second debate in two weeks).

So there is still time to catch on, like Warren, or to have a breakout moment, like Harris — but it’s not clear just how much time there is left, before the top tier solidifies.