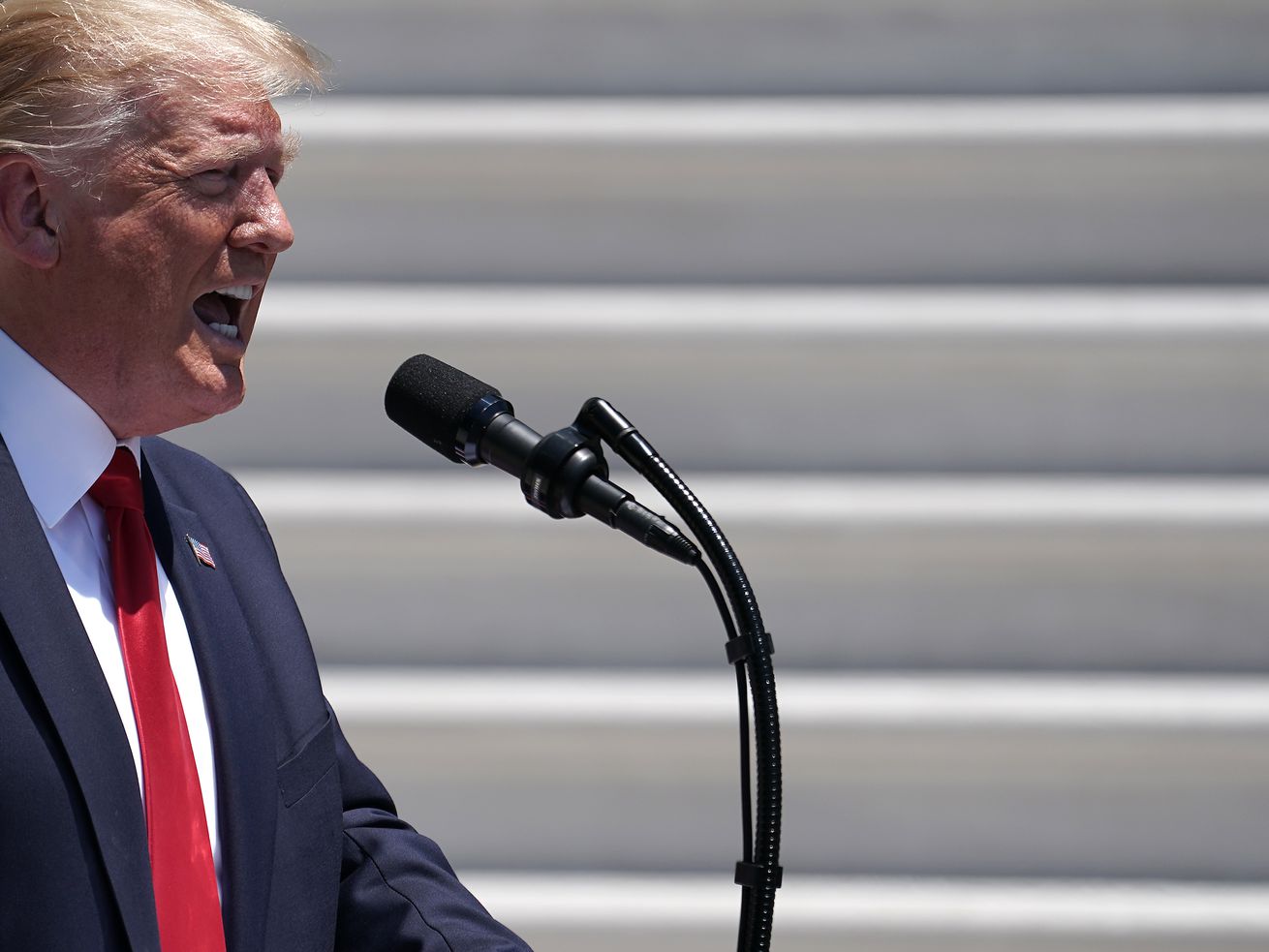 Trump may have just solved House Democrats’ infighting — for now.

House Democrats will soon vote on a formal resolution condemning President Donald Trump for his racist tweets about four members of Congress.

After heavy criticism of the president’s words in her own tweet this weekend, House Speaker Nancy Pelosi announced the House will go further. Democrats will soon introduce a resolution condemning Trump’s “xenophobic” remarks. The resolution will be sponsored by Reps. Tom Malinowski (D-NJ) and Jamie Raskin (D-MD). It’s not yet clear when the House will vote on the measure.

“The House cannot allow the President’s characterization of immigrants to our country to stand,” Pelosi wrote in a Dear Colleague letter. “Our Republican colleagues must join us in condemning the President’s xenophobic tweets.”

Late Monday afternoon, the four targets of Trump’s tweets, progressive first-term members Reps. Ilhan Omar (MN), Alexandria Ocasio-Cortez (NY), Ayanna Pressley (MA), and Rashida Tlaib (MI) held a press conference to respond to the president’s comments. All of them dismissed Trump’s tweets as a distraction to the larger issues of his presidency, including the treatment of migrants and children at the southern border. Two members, Tlaib and Omar, reiterated calls for Trump to be impeached.

“We can either continue to enable his president and report on the vile garbage that comes out of his mouth, or we can hold him accountable to his crimes,” Omar said. “It’s time to stop allowing this president making a mockery of our Constitution, it is time to impeach this president.”

Ocasio-Cortez said Trump keeps attacking progressive Democrats because it’s easier than defending his own policies, like trying to dismantle the Affordable Care Act.

“This president does not know how to defend his policies, so what he does is attack us personally,” she said.

This weekend, Trump attacked Omar, Pressley, Ocasio-Cortez, and Tlaib, the four progressive collectively known as the “Squad.” The four are all women of color, and Trump excoriated them in a tweet, without naming them directly, saying they should “go back” to the “corrupt” countries they are from.

So interesting to see “Progressive” Democrat Congresswomen, who originally came from countries whose governments are a complete and total catastrophe, the worst, most corrupt and inept anywhere in the world (if they even have a functioning government at all), now loudly……

….it is done. These places need your help badly, you can’t leave fast enough. I’m sure that Nancy Pelosi would be very happy to quickly work out free travel arrangements!

Even though all the women Trump targeted are American citizens and three were born in the US (Omar immigrated from Somalia), the president said they should go back to the countries they came from, echoing a racist trope. Democrats called out the president; Malinowski, who was born in Poland, questioned on Twitter this weekend whether Trump would tell him — a white man — whether to go back to his country of origin.

Unlike 3 of the “Democrat Congresswomen” Trump attacked today, I was actually born outside the US. Does he think I should go back?

This is exactly the sort of rhetoric that inspires disturbed people to violence, against Jews, Muslims, Sikhs – anyone they see as the “other.”

On Monday, Pelosi made it clear the full weight of the caucus would be used to support the four first-term lawmakers, who have been at the center of another intraparty debate roiling the caucus over progressives angry at leadership and moderates over a recent immigration bill they felt did not go far enough to hold the Trump administration accountable for its actions at the border. Trump may have just helped unify the caucus after a week of infighting.

“Let me be clear, our Caucus will continue to forcefully respond to these disgusting attacks,” Pelosi said in her letter.

Turns out Trump is a great unifier for Democrats

Trump’s tweet came on the heels of an intra-Democratic caucus blow-up that started last week and continued into the weekend. The people at the center of it were Ocasio-Cortez and her staff.

Who is this guy and why is he explicitly singling out a Native American woman of color?

Her name is Congresswoman Davids, not Sharice.

She is a phenomenal new member who flipped a red seat blue.

Keep Her Name Out Of Your Mouth. pic.twitter.com/k4sV5hsbQl

A spokesperson for Pelosi declined to comment on the speaker’s view of the tweet from the official House Democrats’ account this weekend, but House Democratic Caucus spokesperson Michael Hardaway confirmed to Vox the tweet was sent intentionally. Hardaway did not explain the rationale behind it.

The House Democrats tweet was responding to something Chakrabarti had tweeted two weeks ago, after Democrats accepted the Senate’s $4.59 billion emergency border funding bill in late June, a bill progressives argued did not go far enough to address conditions at the detention centers at the border. Progressives fought to get language implementing tougher standards for border agents to follow in the bill, but it was stripped out.

Chakrabarti called moderate Democrats who voted for the Senate plan “New Southern Democrats,” and said they were “hell bent to do to black and brown people today what the old Southern Democrats did in the 40s.” (Southern Democrats in the 1940s were on the whole conservative, and were opponents of civil rights efforts, including early attempts at desegregation.) Chakrabarti eventually deleted the original tweet, clarifying he didn’t see those members as racist, but as enablers of a racist system.

There’s a longer history here that has to do with Ocasio-Cortez and Chakrabarti coming from a group called the Justice Democrats, whose intention is to primary moderate Democrats, largely in safe districts, and thereby move the caucus to the left. But a tweet sent from the official House Democrats’ account was a surprising development.

House Democrats still have to hash out some disagreements, but Trump’s outburst may serve to unify the caucus around a straightforward message: The president is racist.

Now, Pelosi and Democrats can turn the attention back on Republicans as they try to put them on the spot to explain or apologize for the president’s comments, rather than focusing on their own difficult internal dynamics.