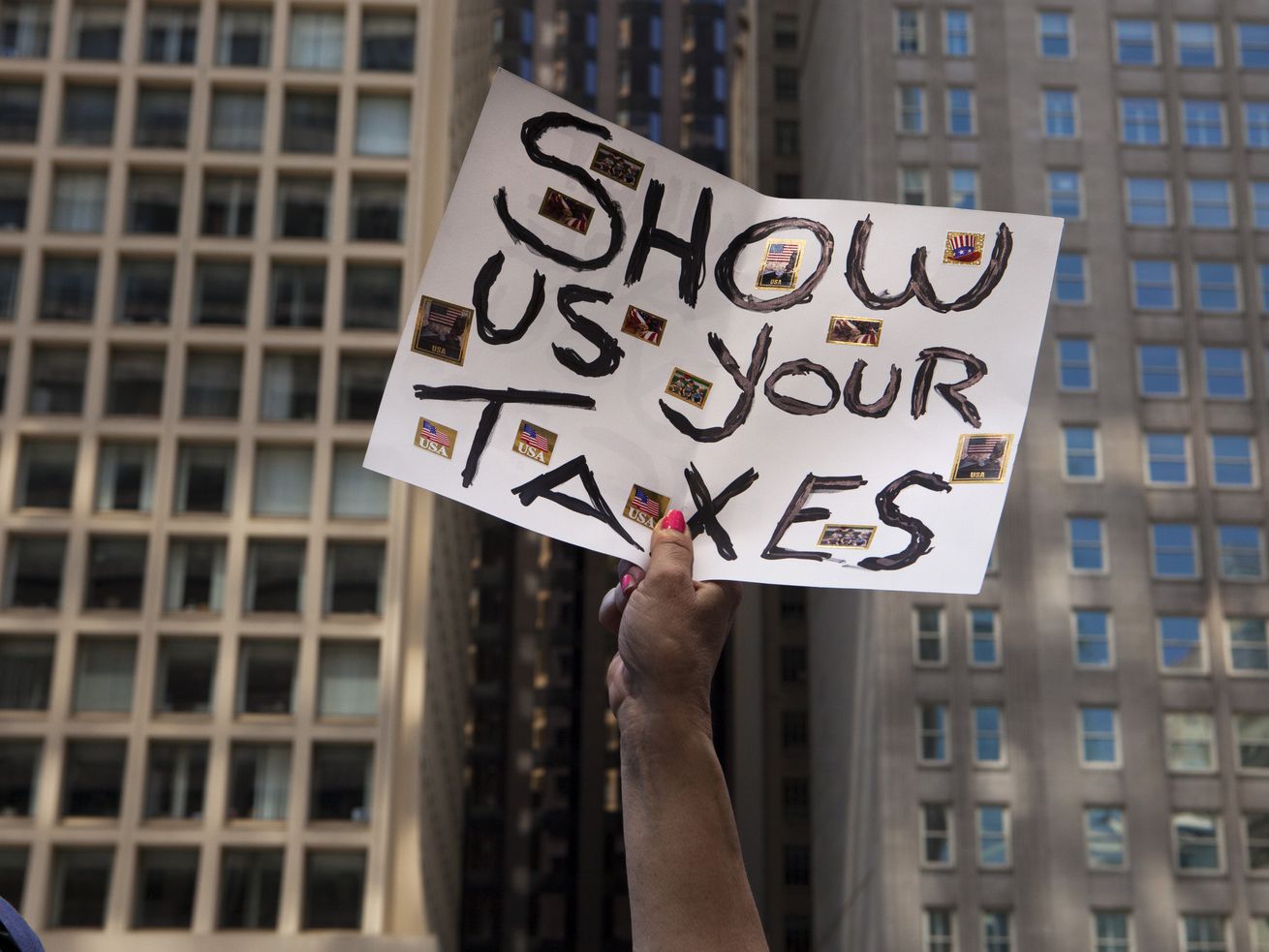 Democrats aren’t jumping at the chance to get Trump’s New York taxes.

New York is doing its best to make it possible for Congress to get its hands on President Donald Trump’s state tax returns. Will it work? That’s an open question. It’s not even clear House Democrats are going to ask for them, let alone how it would play out in the courts if they did.

On Monday, New York Gov. Andrew Cuomo signed a bill that would allow three congressional tax committees to request state income tax returns and reports from the New York State Commissioner of the Department of Taxation and Finance.

While the change could, presumably, apply to many government officials, it is aimed at one individual in particular: Donald Trump.

“This bill gives Congress the ability to fulfill its Constitutional responsibilities, strengthen our democratic system and ensure that no one is above the law,” Gov. Cuomo said in a statement upon signing the bill.

This is the latest step in Democrats’ broad efforts to bring President Trump’s tax returns to light. Last week, House Ways and Means Committee Chair Richard Neal (D-MA) sued the Treasury Department to get the president’s federal returns. This state bill opens up another avenue for Congress, but as with the federal returns, it’s complicated.

The battle over the federal tax returns is likely to be tied up in the courts for months, if not years, and if Democrats do try to use the newly enacted law to get Trump’s state tax returns, the president and his legal team could try to fight that as well. (The White House did not return a request for comment on what they’d do in such an event.)

And at this point, House Democrats might not even request the New York state tax returns at all. Neal doesn’t appear to be in a hurry; he told Bloomberg in June he thought doing so might inadvertently boost the Trump administration’s argument that Congress is going after his tax returns as part of a political vendetta and fishing expedition, not as part of its legislative or oversight duties. And his office has said that he’s been prudently laying the case so it’s likelier to hold up in court.

Still, Neal has been criticized for moving slowly on attempting to get Trump’s federal tax returns. Some on Capitol Hill aren’t happy.

“Neal’s enthusiasm for using what New York has offered and conducting actual oversight is probably lower than what a patient would offer to have their molars yanked without anesthesia,” said a congressional aide.

Neal’s office did not return multiple requests for comment on his plans now that the New York law has been passed.

The New York bill, which passed the state legislature in the spring, allows the New York state tax commissioner to release state tax returns and information to three specific congressional committees that have jurisdiction over taxes: the House Ways and Means Committee, the Senate Finance Committee, and the Joint Committee on Taxation. It applies to the returns of federal, state, and local government officials, including presidential cabinet members and staff, state judges, elected officials, and, of course, the president and vice president, if they file tax returns in New York. It doesn’t apply to private citizens.

The bill authorizes the commissioner to release the information as long as it is requested for “a specified and legitimate legislative purpose,” and the committee has to have made a written request to the US Treasury Secretary for the individual in question’s federal tax returns.

“This is really narrow,” Kerry Donovan, communications director for Assemblyman David Buchwald, who sponsored the bill in New York’s lower chamber, told me. “It just adds three people to the list of people who can make requests for the purposes of legislative oversight and enforcement.”

He noted that the New York tax commissioner can already share such information with the IRS and other state commissioners. The bill is “pretty crystal clear and doesn’t have a lot of trapdoors in it,” Donovan added.

Trump’s state tax returns wouldn’t tell us everything, but they would tell us something

There are certain items that would have to be redacted or removed before Trump’s or anyone’s tax returns were released to a congressional committee — namely, as the final legislation reads, any “copy of a federal return (or portion thereof) attached to, or any information on a federal return that is reflected on, such report or return, and any social security numbers, account numbers, and residential address information.”

Basically, that means any information directly from a federal tax return, or personal information such as a social security number, can’t be disclosed. But a lot could be. For example, Buchwald told me, say the IRS were to conduct an audit that results in an adjustment to income. That adjustment would have to be reported to New York state, so the state returns would show that it happened, but they wouldn’t have a literal copy of the federal audit results.

While seeing Trump’s state returns wouldn’t be the end-all, be-all of his financials, it would be something. And it’s certainly better than nothing.

“The New York information is best viewed as a road map to help Congress’ Trump oversight investigation,” Steve Rosenthal, senior fellow at the Urban-Brookings Tax Policy Center who has pushed for the release of Trump’s state tax returns, said in an email.

He added that he believes the legislation was written so generically, Trump might have a hard time arguing against it in court. And he may need to act quickly in the event Congress does request his state returns. “Once the cat is out of the bag, it’s out,” Rosenthal said.

As mentioned, it’s not clear whether Congress — or, specifically, Rep. Neal — are going to make an attempt at getting Trump’s state tax returns with this new law in place. Neal told Bloomberg in June that his committee doesn’t “have jurisdiction over New York taxes.”

Democrats are split over how to approach the issue of Trump’s taxes, both federal and state. Some, including House speaker Nancy Pelosi (D-CA), have publicly backed Neal’s strategy and supported his slow-going approach of building a strong case he believes will hold up in court.

“I have high hopes for a victory in the court,” Rep. Judy Chu (D-CA), told Bloomberg with respect to the federal returns. “I think we should let that process play out.”

Others, however, want Neal to go after the state returns as well.

Rep. Bill Pascrell (D-NJ), an early proponent of going after Trump’s tax returns, in a statement said that the American people “deserve to know if their president is a crook” and emphasized the importance of the pushes for both the federal and state tax returns.

“I have been seeking oversight of Trump’s tax returns for years using our clear power under section 6103(f) and I am confident the courts will side decisively with the Ways and Means Committee. I appreciate what the New York legislature and Governor Cuomo are trying to accomplish,” he said. “We should investigate any tool provided us that might shed sunlight on Trump’s tax return history, including his tax reporting practices and the results of any IRS audits. What is Trump hiding?”

Section 6103 is the 1924 law that authorizes the Ways and Means Committee to request the federal tax return information — personal and business — of any taxpayer from the IRS. (I have a full explainer on the statute and how Democrats could use it here.) Treasury, theoretically, has to comply, but it hasn’t, hence the Democrats’ decision last week to sue.

It’s not clear how the push for the state returns would turn out or whether it would be held up in court, just as the federal push has. But right now, Democratic leadership at least doesn’t appear interested in trying it.