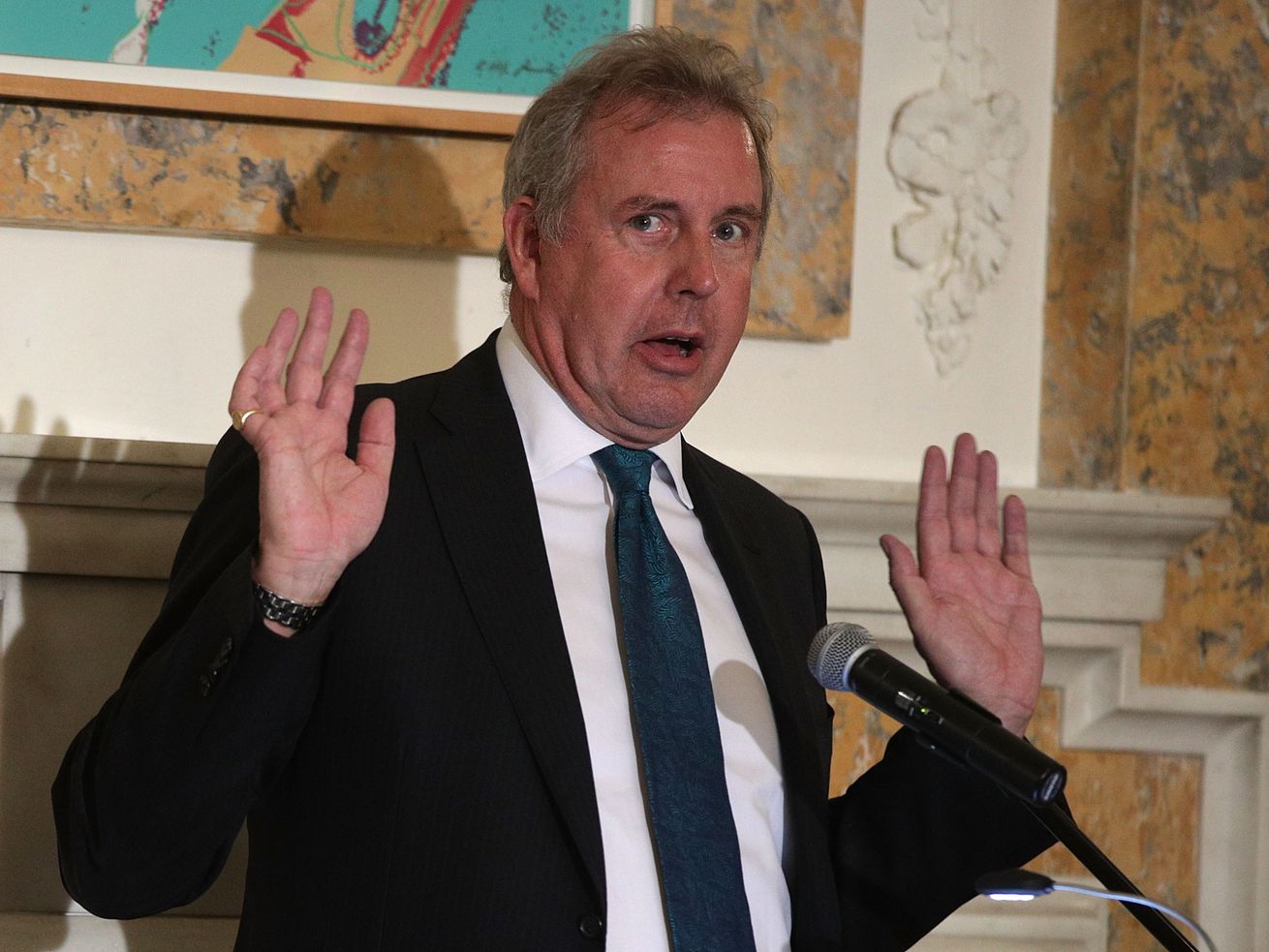 In a batch of leaked cables, the UK ambassador to the US Kim Darroch described President Donald Trump’s administration as “inept” and said that, despite being president, Trump “radiates insecurity.”

On Monday, Trump inadvertently confirmed Darroch’s assessment when he tweeted, “I do not know the Ambassador, but he is not liked or well … thought of within the U.S. We will no longer deal with him.”

But Trump didn’t limit his criticism to Darroch; he also criticized outgoing Prime Minister Theresa May and her handling of Brexit, saying that she created a mess, and lamenting that she did not take his advice. “I told her how it should be done, but she decided to go another way,” he said.

Trump got in his jab about the ambassador and then celebrated the fact that the UK will “soon have a new prime minister.”

“While I thoroughly enjoyed the magnificent State Visit last month, it was the Queen who I was most impressed with!” Trump concluded.

….thought of within the U.S. We will no longer deal with him. The good news for the wonderful United Kingdom is that they will soon have a new Prime Minister. While I thoroughly enjoyed the magnificent State Visit last month, it was the Queen who I was most impressed with!

Trump’s tweet will surely escalate the awkwardness between the US and the UK that began after the Daily Mail published on Sunday secret cables sent by Darroch — who’s job as a diplomat is not just to liaise with US officials but also to inform the British government what to expect from the Trump administration.

The diplomatic feud between the US and the UK, briefly explained

Darroch, who has served as the UK ambassador to the US since January 2016, wrote (or signed off on) cables that span most of Trump’s presidency, including Trump’s state visit last month and Trump’s alleged last-minute decision to call off an Iran strike.

In the cables, Darroch described the Trump administration as dysfunctional and referred to the “vicious infighting and chaos” within the White House; called Trump’s language at rallies “incendiary;” and noted policy areas where the US and Britain diverged, including “climate change, media freedoms and the death penalty,” that might cause tensions between the UK and the US, especially as the UK pursues closer ties with the US after Brexit.

The candid memos don’t contain much that media reports haven’t already documented, or that Trump administration officials haven’t already said (in some cases even less diplomatically), or that isn’t already obvious to any watcher of UK-US relations. (And it’s not like Trump hasn’t said some things himself. In public.)

But the cables were intended to be secret, and their release is obviously embarrassing for both Trump and the United Kingdom, which is trying to carefully manage its relationship with the US with the hope of pursuing a free-trade deal after the UK leaves the European Union (presumably) in October.

The UK Foreign Office has also confirmed that the cables are real, though it tried to distance May‘s government from them, saying they didn’t necessarily reflect the views of the government or its ministers. But the Foreign Office also said that ambassadors are expected “to provide Ministers with an honest, unvarnished assessment of the politics in their countries.”

The cables also appear to be not hacked but leaked, which has led to speculation that some within Britain’s civil service are eager to push out Darroch, as he’s not just critical of the US but is seen as a little too pro-EU (he served as a Britain’s representative to the EU in the past).

Darroch was set to leave his post at the end of the year, but now that Trump has said “we will no longer deal with him,” he is essentially persona non grata, making it very hard for Darroch to stay in his post — even though the ambassador reportedly does have good working relationships with some top officials in the White House.

A spokesperson for May called the leak “unacceptable,” but it’s also said that the prime minister had “full faith” in Darroch, even if she disagreed with his depiction of Trump. Liam Fox, the UK trade secretary who is in Washington, DC, meeting with Ivanka Trump, was expected to apologize in person for the leak. He called the leak “malicious, unprofessional, unethical and unpatriotic,” and called for that individual to be prosecuted.

But as Trump kind of points out, this leak comes at an inauspicious time for the British government. May is essentially a caretaker prime minister; she resigned last month after failing many times to pass her Brexit deal and take the UK out of the EU. The Conservative Party is voting on its new leader, who’ll take over as prime minister before the end of the month.

It’s currently a contest between Boris Johnson, the former foreign secretary who appears to be the runaway frontrunner at this point, and current foreign secretary Jeremy Hunt. Trump has already said Johnson would make an excellent prime minister, though he also said he liked Hunt during his most recent state visit.

Hunt has condemned the leak and said he disagreed with Darroch, though he defended the ambassador’s prerogative to offer an unfiltered assessment. (Johnson doesn’t appear to have commented so far.)

But while Trump himself is a tricky figure (he’s deeply unpopular in the UK), one of the promises of Brexit — which both Johnson and Hunt say they’ll deliver by October 31 — is the UK’s ability to strike its own trade deals. And the possibility of a UK-US trade deal is sometimes dangled as a Brexit advantage — one hardcore pro-Brexit politicians like Nigel Farage, of the aptly named Brexit Party, have continued to promote.

And speaking of Farage, Trump has previously said that he’d like the Brexiteer to be UK ambassador to the US. Farage said after this whole affair he wasn’t necessarily the right guy to be the ambassador to the US, but he made clear he thought Darroch — or someone like him — was the wrong choice.

“From the moment Trump was elected, this man was the wrong person to be the British ambassador — a globalist in outlook, totally opposed to the Trump doctrine,” Farage said. And after this scandal, and a new prime minister in place, Farage — and Trump — could potentially get their wish of a new ambassador.