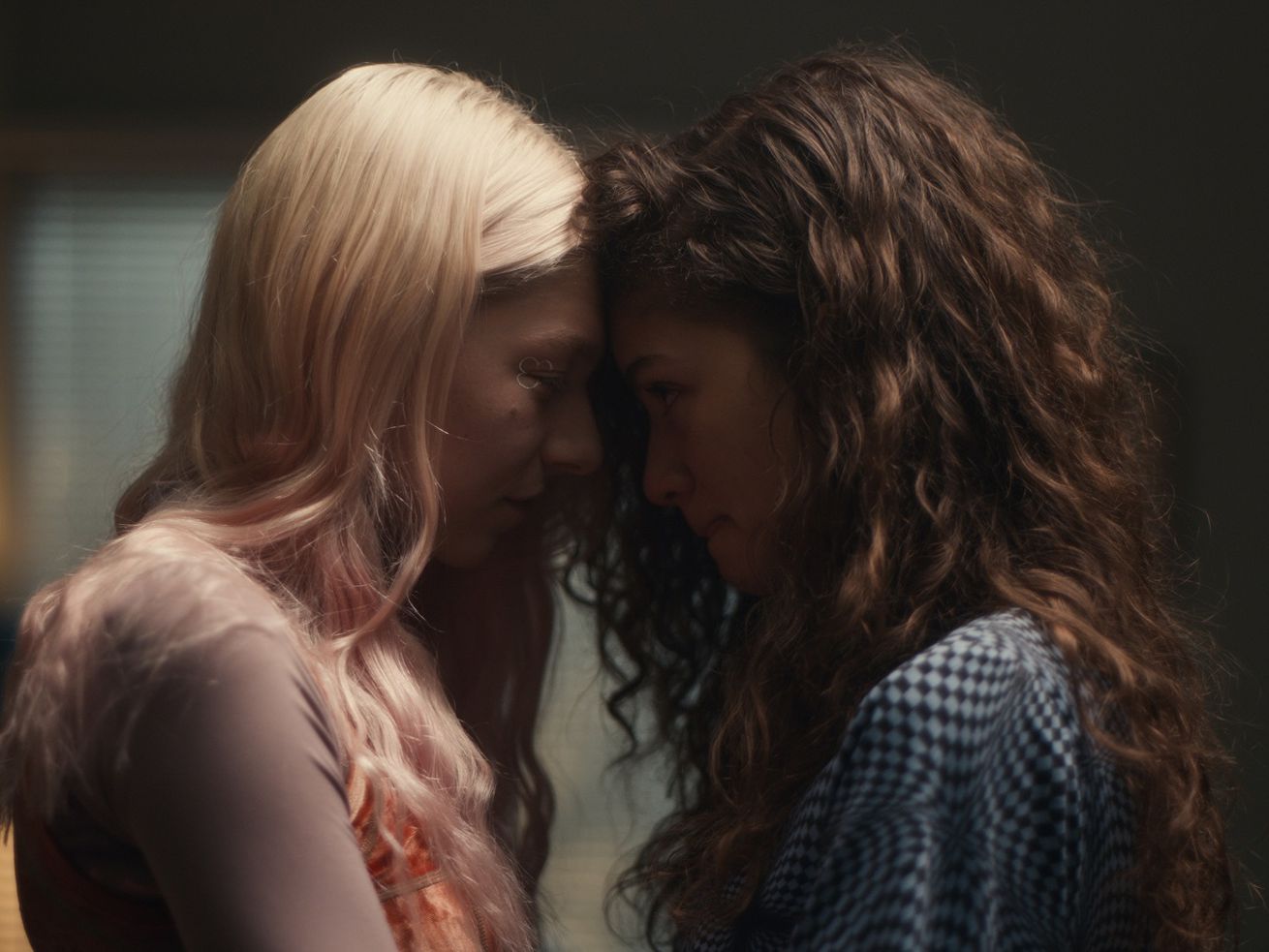 It might be about teens, but it’s aimed at parents.

The true audience of HBO’s new teen drama Euphoria isn’t really teens. It’s not even the parents of teens. No, the true audience for Euphoria is parents of kids who are about 5-to-10 years old, who still have relatively good relationships with those kids but can see the storm clouds on the horizon.

The show’s pilot swerves wildly between careful observation and trying too hard. I almost had to stop watching it after the first five minutes, which summarize the protagonist’s life up until now; she’s 17 years old, but Euphoria begins with the assertion that the last time she was happy was in the womb, a sentiment that feels like it must have been ripped off from a Hot Topic T-shirt. The episode has gotten a lot of attention for depicting “how the teens live today,” but its greatest strength isn’t what’s timely about it, but what’s eternal about it.

Teens are always caught between a growing emotional and physical maturity and the fact that their brains are racing to catch up, which makes them absolute dumbasses. Their wildly racing emotions and thoughts make them ideal protagonists for stories, because they will often embark upon completely destructive courses of action with the certitude that they are doing exactly what they need to be doing.

But too much of the Euphoria pilot feels like leftover “What the kids are getting up to today — it might shock you! More at 11!” paranoia from the ’90s, re-heated for today’s viewers. And very little of the show actually seems as if it’s tapped into the way kids live in 2019. It’s disappointing.

And yet, every so often, the show will present a scene or image so beautiful that I can’t write it off entirely. It’s a series at war with itself — two shows in one.

Show #1: The same old “Why are the teens so messed up?” panic, directed at parents of kids who are almost teens

The opening montage tracing the life of Rue (Zendaya) to date almost put me off of Euphoria entirely because it’s so arch and blunt — but not in a way that seems to serve the voice of the character. Instead, it seems designed to provoke her presumed adult audience. Rue doesn’t feel like a person so much as a collection of storytelling tics in her voiceover narration.

In one sequence, Rue, as a little girl, goes from counting the panels in an overhead light in her home to sitting in a doctor’s office (where it’s stated that she might have a host of “possible” mental health conditions) to watching her mother divvy up pills that she will need to take, day after day, to manage the conditions she’s been officially diagnosed with. (We don’t find out what they are.) It feels vaguely relevant, in that Rue later becomes a drug addict, but it also feels like a magazine cover story about kids being over-medicated come to life. The point is less to say something, and more to shock the viewer. Look at all those pills! For such a young girl!

Leaning on details about what the teens are up to in an effort to shock parents — and, let’s face it, the media, who have already dubbed Euphoria “controversial” despite nobody actually seeming to be all that mad about it — is a time-honored tactic, one that resurfaces in pop culture every five to 10 years.

The ’90s had Larry Clark’s Kids, in which bored teens wandered New York City just looking to get high or have sex, the better to feel something, and the scholarly book Reviving Ophelia, whose central argument was essentially that TV made teen girls feel bad about themselves, causing them to make worse and worse choices. 2003’s Thirteen — in which a girl who’s just turned the titular age falls down a rabbit hole of depravity — took a similar tack. But there are also glossier takes on this basic theme, most notably the CW series Gossip Girl, which ran from 2007 to 2012.

A lot of Euphoria follows in the basic footsteps of these earlier projects (as well as the Israeli series Euphoria, which this one has been adapted from by writer Sam Levinson, but very freely adapted, since the original was set in the ’90s), while making a few attempts to offer social commentary that’s rooted in the present. I liked one scene where a girl paused sex with her boyfriend when he began to take it in a direction she didn’t expect or want — and he actually listened and responded.

This lack of tech at the center of some of these stories speaks to what Euphoria is really about: Kids who were teens in the ‘90s — and who remember the dumb shit they got up to then — looking back on those days with some degree of clarity, and then looking at their own kids and being fearful for what they might get up to in the next five to 10 years.

The problem is that this approach denies the teenage characters any agency. They simply become a faceless mob of teens who do bad things, and that’s that. Future episodes (I’ve seen four) build on this foundation in interesting ways, but Euphoria can never quite escape being about “the teens” instead of just a teen.

Except when it does.

Show #2: A lovely coming-of-age story about two girls who find each other right when they need to

Zendaya is one of my favorite actors of her up-and-coming generation, and her world-weary affect is perfect to play teen characters who speak with the voice of 30something screenwriters, because Zendaya has seemed world-weary since she was on the Disney Channel as a teen. (Side bar: If you are contemplating a new film version of Cabaret, Hollywood — and I know you have to be! — Zendaya would be a phenomenal Sally Bowles.) When she’s monologuing as Rue, Euphoria is at its worst. But when she’s allowed to just be Rue, there’s something undeniably appealing about the show.

But one of the reasons Euphoria’s pilot is so ungainly and overloaded with shock value is that it’s also all prelude for the friendship that develops between Rue and the new girl in town, Jules (Hunter Schafer).

Jules is trans (something indicated to the audience not via a monologue but via a quick shot of her injecting hormones into her thigh), and it’s welcome that Euphoria doesn’t tie Jules’s self-destructive streak to her transness but, instead, to her devastation in the wake of her parents’ divorce. (As Rue indicates in her voiceover, something big must have gone down if Jules’s dad received sole custody.)

In a way, I’m foregrounding Jules’s trans status not because the show foregrounds that aspect of the character — it really, really doesn’t — but because I haven’t really seen a teenage trans character treated so non-salaciously on TV. She’s just another troubled kid. The first time I saw Jules, even before I knew she was trans, I sparked to something in her, like Rue does the first time the two meet. And then the show revealed her trans status, and the penny dropped.

What’s neat about the connection between Rue and Jules is that both are trying to outrun something in their pasts. Rue doesn’t know what she’s outrunning and wants to remember — right down to the borderline exploitative way she talks about being born three days after 9/11 — where Jules very much does remember and wants desperately to forget. Rue tells us about her life in encyclopedic detail, but Jules’s backstory before she made it to the LA suburbs, where Euphoria takes place, is hidden from us. Something bad happened in her parents’ marriage, and now she’s using online dating apps to set up rendezvouses with much older men. (The man she meets up with in the pilot turns out to be the father of a classmate, a soapy twist I probably should have hated but totally loved.)

When Euphoria pulls back from Rue and Jules, to focus on its wider teen ensemble, or the kids’ parents, or something like that, it struggles and feels alarmist. But when it zooms in on the growing friendship between these two girls, there’s a kind of hushed mystery to it. In these scenes, Levinson’s clear skill at observing how these kids might interact with each other weds perfectly to the fact that he can never fully get inside their heads, nor can he entirely understand what Rue and Jules’s friendship is, or why it forms so quickly. Their near-immediate bond embodies the kind of alchemy that no writer could really be privy to.

Euphoria excels at portraying those moments of hushed, immediate electricity between two people, the ones that hit you out of the blue as a teenager and don’t happen as often as you get older. I kind of hated Euphoria’s pilot, but I kept watching further episodes because of Rue and Jules’s dizzy-sick meeting at a house party — I felt it in a way the rest of the show simply couldn’t approach.

Euphoria wanted so badly to shock me, to make me fret over how thoroughly the kids are messed up, that I was ultimately most impressed that it did the exact opposite in the end. These kids might party and experiment and try on new personas for size, but down at the core of it, they’re going to be just fine.