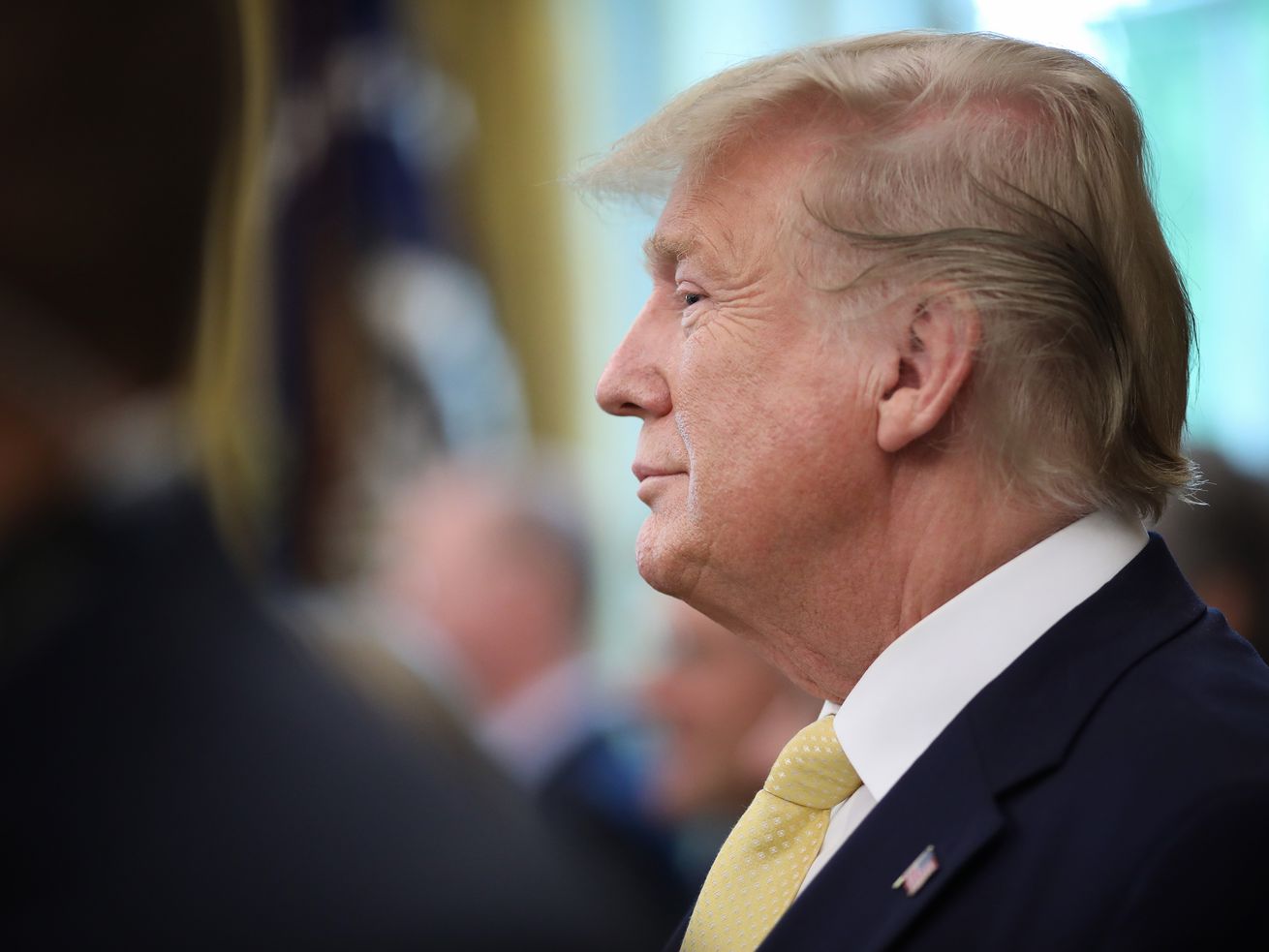 Trump said he wants a new nuclear deal, and suggested he’d be willing to lift sanctions in exchange.

President Donald Trump issued a warning to Iran Sunday, saying if the nation were to take further military action against the US, it could expect severe American retaliation.

Trump made the comments during an interview with NBC’s Meet the Press that aired on Sunday in explaining why he decided not to order any physical military retaliation after Iran shot down a US drone it claimed was in its airspace.

“What happened is, I said, ‘I’m not going to do it. I’ll save it. If they do something else, it’ll be double,’” Trump said. He also said, “I’m not looking for war and if there is, it’ll be obliteration like you’ve never seen before.”

The president tweeted Friday he had a limited military strike “cocked & loaded” on Thursday, but that he called it off because it would have resulted in roughly 150 casualties. Speaking to Meet the Press’ Chuck Todd, Trump reiterated this version of events, saying that a “modest but pretty, pretty heavy attack schedule” had been in the works.

When pressed on what would have been a better response, Trump did not mention the cyberattack the US launched against Iran, but instead alluded to a new round of sanctions that he said will be announced on Monday, “We’re increasing the sanctions now. But the response is always going to be very strong.”

The US had a nuclear deal with Iran; it was negotiated under the Obama administration, and involved several other countries, including France, the UK, and China. That deal lifted some sanctions in exchange for Iran dismantling its nuclear program. All of the deal’s signatories were in compliance with it until Trump exited it in 2018.

The president has said since that time that he would negotiate a new deal. But that hasn’t happened, and last week, Iran announced that it, too, would cease to comply with the deal by stockpiling forbidden amounts of uranium.

Sunday, Trump described his vision for a new deal. It would have the same goal as the deal he left, and would seem to offer the Iranian people similar economic benefits.

“Here it is,” the president said. “You can’t have nuclear weapons. And if you want to talk about it, good. Otherwise you can live in a shattered economy for a long time to come.”

Trump went on to say he’d be willing to meet with Ayatollah Ali Khamenei, Iran’s Supreme Leader, for talks with “no preconditions.”

WATCH: President Trump tells Chuck Todd that he wants to talk with Iran with “no pre-conditions.” #MTP #IfItsSunday pic.twitter.com/rahOnNk4I6

This is something Trump has advocated for before. As Vox’s Alex Ward wrote, “for decades, American leaders have typically rejected meeting adversaries without setting strict conditions beforehand … Trump, however, doesn’t seem to care about any of that.”

The president has advocated for meeting with adversaries like Kim Jong Un without preconditions, and shortly after leaving the nuclear deal, Trump said he’d talk with Iranian President Hassan Rouhani without preconditions as well: “Speaking to other people, especially when you’re talking about potentials of war and death and famine … you meet.”

Not everyone in Trump’s administration shares this view, something he acknowledged Sunday. Secretary of State Mike Pompeo and National Security Adviser John Bolton are known to be rather hawkish on Iran. Just before he was appointed to his current post, Bolton called for regime change in the country, saying in a speech, “The declared policy of the United States should be the overthrow of the mullahs’ regime.”

He has not signaled that he’s changed his position much. “Yeah, John Bolton is absolutely a hawk,” Trump told Todd. “If it was up to him he’d take on the whole world at one time, okay?”

But Trump also sought to reduce concerns he could be overly influenced by those in his White House who are pushing for war, saying he counts “both sides” — doves and hawks — among his advisers.

WATCH: President Trump tells Chuck Todd that he has doves and hawks in his cabinet. #MTP #IfItsSunday

Trump: “I have some hawks. John Bolton is absolutely a hawk. If it was up to him he’d take on the whole world at one time.“ pic.twitter.com/JKVB2IvMVU

When the topic of conversation turned to another adversary — Russia — Trump did little to allay concerns about Russian interference in the upcoming presidential election. Todd asked if the president planned to bring the issue up with President Vladmir Putin later this week at the G20 summit, the annual international meeting between leaders from 19 countries and the European Union.

The question came a week after an interview Trump gave to ABC News’s George Stephanopoulos, in which he said he would accept information from foreign actors if it was offered during his 2020 reelection campaign, and that such information would not constitute foreign interference.

He walked back his statement on Twitter the following morning, writing, “I meet and talk to ‘foreign governments’ every day….Should I immediately call the FBI about these calls and meetings? How ridiculous! I would never be trusted again.”

Todd asked Trump if this statement amounted to an invitation to Putin to meddle in the 2020 election. Trump said no, but did not respond when asked if he’d tell Putin not to meddle in another US election — instead the president attacked the media and said, “Chuck, there’s so much fake news.”