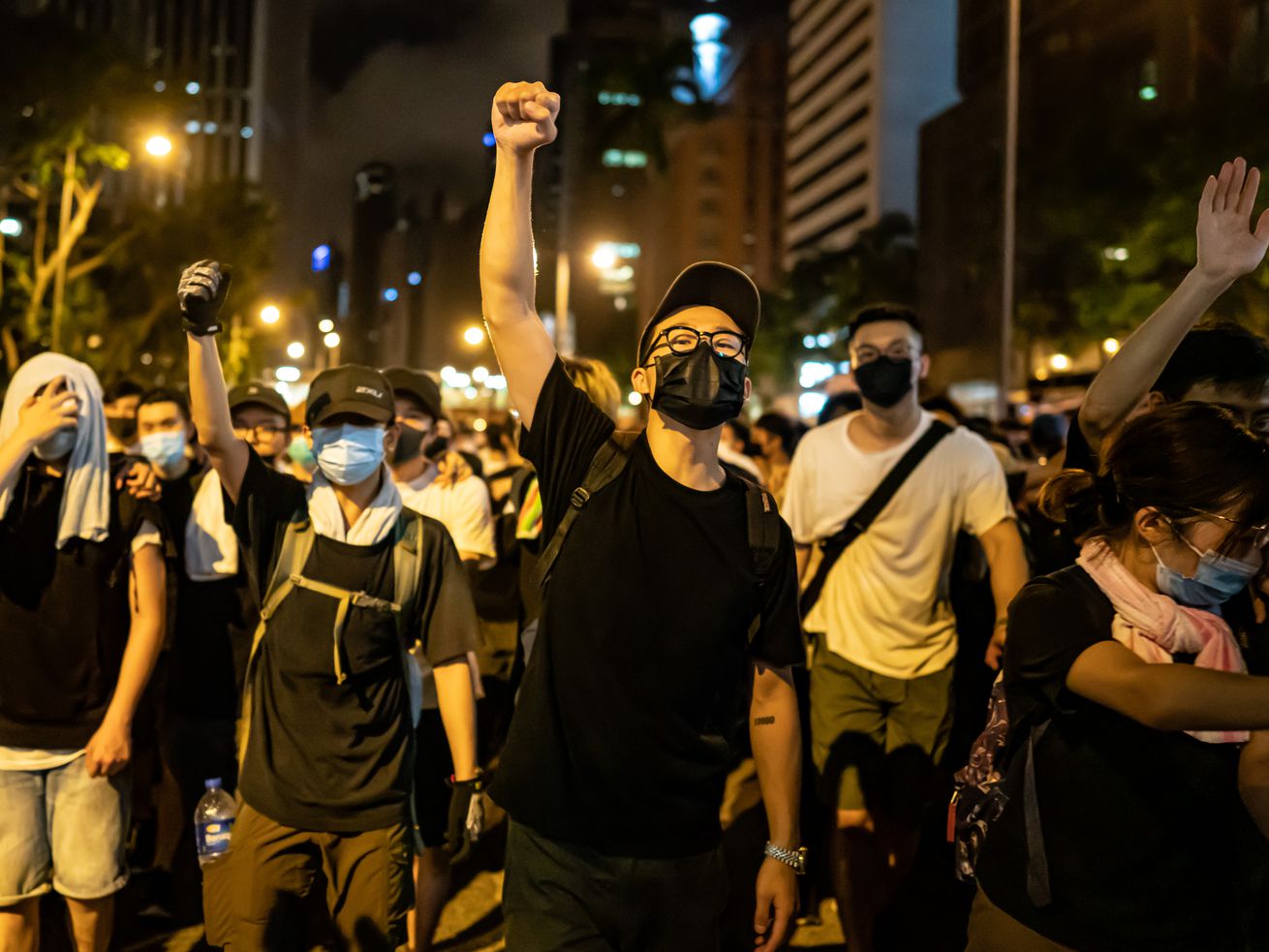 The fight over an extradition law and democracy in China, explained.

On the surface, the people of Hong Kong are fighting their political leaders over a seemingly bland set of amendments to a longstanding law. But what’s really motivated people to flood the city’s streets in record numbers is something much grander: the future of democracy in China.

Last week, hundreds of thousands in Hong Kong held a candlelight vigil for the victims of the Tiananmen Square massacre 30 years ago. And on Sunday, roughly 1 million people demonstrated in the semi-autonomous Chinese city-state against amendments to an extradition law that would allow a person arrested in Hong Kong to face trial elsewhere, including in mainland China.

That peaceful protest — one of the largest in the city’s history, featuring about one in every seven residents — turned violent the next day when a few hundred citizens clashed with police.

The passion is understandable. For many, the amendments would all but cement Beijing’s authority in a city that’s supposed to be allowed to operate mostly on its own for three more decades. The problem for demonstrators is that the measures will likely pass as soon as Wednesday, due to a legislature and leader that answer to Beijing.

“We were doing it, and we are still doing it, out of our clear conscience, and our commitment to Hong Kong,” Carrie Lam, the city’s chief executive, told reporters on Sunday in her first comments after the protests began.

The extradition law fight, then, is the latest one in Hong Kong residents’ years-long effort to stave off Beijing’s creeping authority. And while the newest push is among the largest in the city’s history, it still may not be enough to save democracy in its nearly last Chinese refuge.

After taking over Hong Kong in a war in the 1800s, Britain returned it to China in 1997 with an important stipulation: The city would partly govern itself for 50 years before fully falling under Beijing’s control. So until 2047, the expectation was that the city and the mainland would operate under the principle known as “one country, two systems.”

But Beijing clearly isn’t waiting that long. “In recent years, the Hong Kong government has disqualified elected lawmakers, banned activists from running for office, prohibited a political party, jailed pro-democracy leaders, expelled a senior foreign journalist, and looked the other way when Beijing kidnapped its adversaries in Hong Kong,” Ben Bland, a Hong Kong expert at the Lowy Institute in Australia, told me.

Those actions, among others, have animated many in the city to resist. “Being here reminds me that the Chinese government is so inhumane and, recently, they are tightening the rule of law in Hong Kong,” Tiffany, a 23-year-old university student who attended the candlelight vigil last week, told the Asia Times on June 5.

Critics view proposed amendments to the extradition law as part of that “tightening.”

The Hong Kong government first discussed them in February, prompted by a shocking case. Chan Tong-kai, a local, was suspected of killing his pregnant girlfriend while the two were on vacation in Taiwan. But the city was unable to send him back to the island because they don’t share an extradition agreement.

The reason? When Hong Kong’s extradition accords were being finalized in 1997, Taiwan and China weren’t included because the mainland has a “fundamentally different criminal justice system operating in the mainland” and because of “concerns over the mainland’s track record on the protection of fundamental rights,” according to an April statement by the Hong Kong Bar Association.

That reality doesn’t sit well with Hong Kong’s current government. Lam, the chief executive, cited Chan’s case among two reasons she wants the amendments passed. “One is of course to provide a legal basis for us to deal with the Taiwan case; the other is to plug a loophole in the existing arrangements for the return or the surrender of fugitive offenders,” she told reporters in April before a government meeting.

The amendments would give the chief executive the authority to decide on a case-by-case basis if a suspected criminal should be extradited to a place with which the city has no formal extradition agreement. That on its own is already a problem for critics, as the city’s leader isn’t elected, but rather is picked by a committee appointed by the government in Beijing.

What’s more, while the city’s courts would get to review the chief executive’s decision, they will have “very little power to reject any extradition request,” M.K. Tam, director of the human rights group Amnesty International Hong Kong, told Al Jazeera on Tuesday. “It’s not a formal prosecution so you cannot examine the evidence presented by the other side.”

The bill also would apply retroactively, meaning thousands of people who may have angered mainland China with a supposed past crime could be at risk of facing trial in mainland China.

As a result, many fear the amendments will allow Beijing to target any person in Hong Kong that it wants.

“We all know that if they want to prosecute someone — a human rights defender or activist — actually in mainland China, the charges are political in nature but they use other laws to prosecute them,” Tam continued.

However, supporters of the law contend that certain financial crimes won’t be included in the bill, potentially saving the city’s influential business leaders from extradition. They also say that no one will be sent away if they might be tortured or killed as part of their punishment, and that the offense must be illegal both in Hong Kong and wherever the suspect is extradited.

That’s still not enough to assuage those who’ve long championed the city’s judicial values. “Both Hong Kong and China knew very well that there had to be a firewall between our different legal systems,” Hong Kong’s last British governor, Chris Patten, told the South China Morning Post in May, adding that Lam’s position is “absurd.”

So the people of Hong Kong are fighting back to curb mainland China’s growing clout in the city. The problem is that effort has been going on for years — and it’s seemingly failing.

China is an authoritarian state. Its political leadership and law enforcement officials don’t like anyone protesting against the government in Beijing and have no tolerance for democratic movements. That, in part, is what makes Hong Kong’s status as a quasi-democracy so unique in China — and so threatening to Beijing.

Little by little, mainland China has gained more power in the city. But every move has only compelled the citizenry to resist even harder.

Here are just two recent examples: Thousands of protesters surrounded Hong Kong’s government headquarters in 2012 after an announced proposal to include more pro-China materials in the school curriculum.

Experts say the newest flare-up is part of the long-term resistance movement to keep the city as independent as possible.

“The proposed change to the extradition law, which would open up Hong Kongers and others passing through the city to the vicissitudes of mainland Chinese justice, is the latest in a long list of actions that undermine democratic freedoms and the rule of law,” says Bland, who also wrote a book about life in post-handover Hong Kong.

There’s also a dark history behind this specific extradition issue. China has increasingly begun kidnapping people it views as criminals, either for their pro-democracy views or for other perceived crimes, but who are outside of its legal jurisdiction. Beijing’s authorities sometimes hold prisoners for years without a proper trial.

In January 2017, for instance, billionaire business executive Xiao Jianhua was forcibly taken out of Hong Kong’s Four Seasons hotel, even though mainland Chinese officials legally can’t do so without the city’s say so. Xiao is now in mainland China, and his fate remains unclear.

This is why the extradition law fight is so personal and so widespread: It’s for the future of human rights and democracy in the city. And if Beijing wins, Hong Kong’s millions of citizens could lose both.

“When the legislation passes — which now seems near certain, and imminent — it will spell the death of Hong Kong as the world has known it,” Ray Wong Toi-yeung, a political activist from the city, wrote for the New York Times last week.