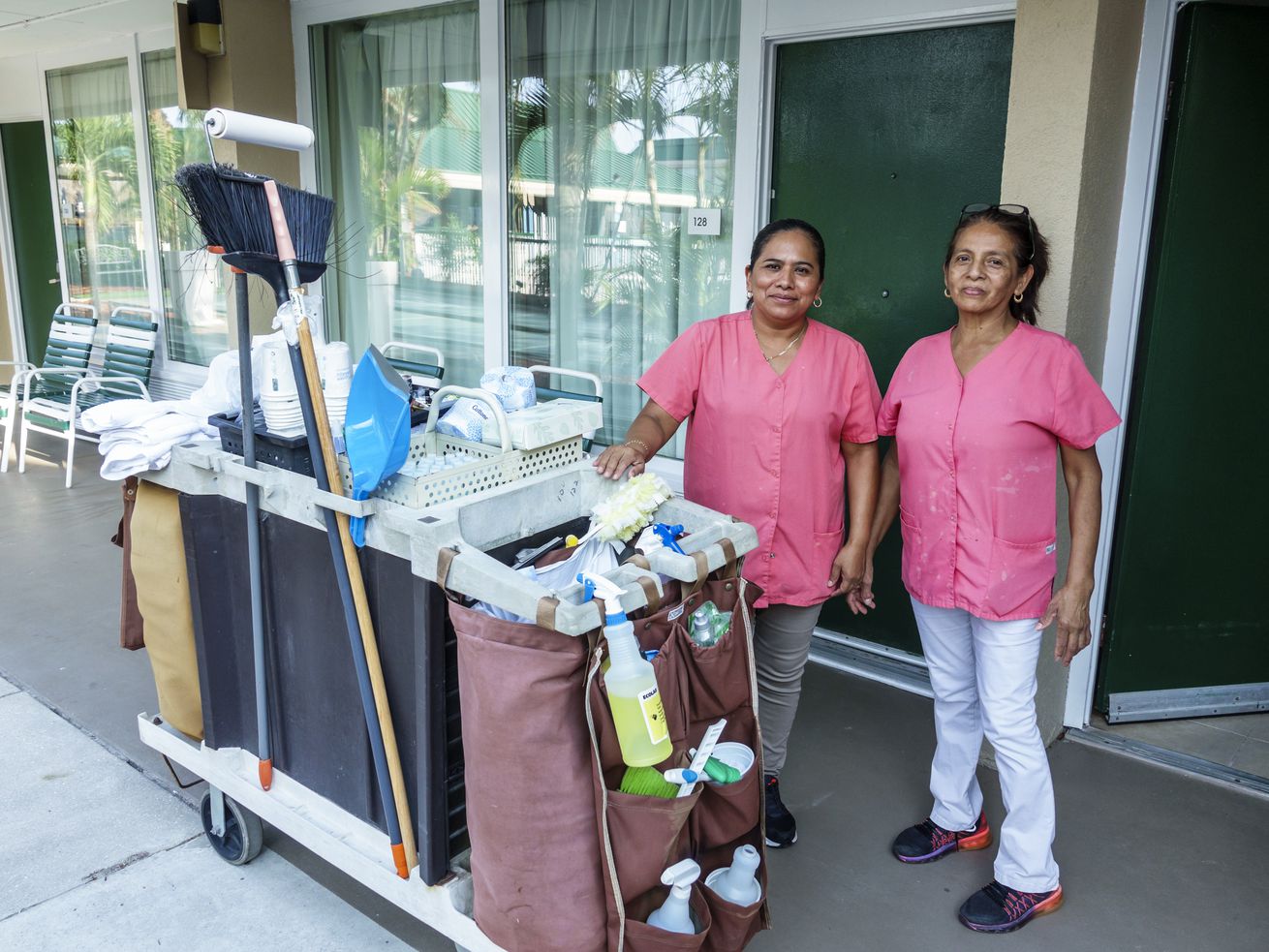 The US needs more low-skilled immigrants, not fewer.

Last week, the White House announced the outlines of a plan that would revamp the country’s legal immigration system, cutting back family-based immigration in favor of “merit-based” immigration. Under that system, the US would prioritize high-skilled immigrants with college degrees who speak English fluently over immigrants with immediate relatives in the US.

Trump and his advisers claim that such a system (which is similar to the one in Canada) is simply about merit — the idea that high-skilled immigrants contribute the most to society. But even if you ignore the racist undertones of that idea, the plan is flawed even based on pure economics.

The US economy needs low-skilled immigrants much more than high-skilled immigrants. The country is experiencing a massive labor shortage across all industries, and businesses are having a much harder time finding construction workers, restaurant cooks, and hotel housekeepers than computer engineers and doctors. The most in-demand jobs are exactly the kinds of jobs that undocumented workers are doing, but Trump’s immigration proposal ignores them completely. In fact, his plan could make the shortage even worse.

The numbers say everything. In March, there were only 811,000 unemployed workers with bachelor’s degrees looking for work, and 1.4 million open positions for professionals like them. The US needs more high-skilled workers to fill all those positions, sure — but the gap is even bigger in low-wage industries that don’t require a college education.

There were more than 2.1 million open positions for low-skilled workers in March, but only 1.2 million people without college degrees looking for work. That’s nearly two jobs available for every unemployed person with nothing more than a high school diploma.

In that sense, low-skilled immigrants are the ones who could contribute the most to the US economy. An immigration system that puts them at the back of the line would make a difficult situation even worse.

What we know about Trump’s immigration platform

The president’s latest immigration plan is light on details. But Trump and his advisers have long talked about changing the US immigration system to focus on “merit.”

The United States currently issues more than 1 million green cards each year, which provide foreigners with legal permanent residency, according to data from the Department of Homeland Security. Roughly 140,000 are employment-related; the rest are based on family ties, refugees status, and the diversity lottery.

The plan Trump is proposing would change that entirely. The new green card system would prioritize immigrants with high levels of education, English-language fluency, and professional skills. (It also includes more money for border security.)

Most of the green cards would go to immigrants under a point system that ranks applicants based on certain criteria, such as professional skills, education level, age, and English fluency.

Another element, according to the Washington Post, includes points for applicants based on “patriotic assimilation,” a concept that would favor immigrants who show interest in American culture. That could include a test of historical texts, such as George Washington’s farewell address.

Notably, as Vox’s Dara Lind explains, the plan does not address the undocumented immigrants currently living in the United States; it also pivots away from Trump’s habit of talking only about the crisis of undocumented migrants crossing the southern border.

But a renewed focus on high-skilled immigrants would do little to solve the biggest problems with the current immigration system.

For nearly a year now, the number of open jobs each month has been higher than the number of people looking for work — the first time that’s happened since the Department of Labor began tracking job turnover two decades ago.

At the end of January, the US economy had 7.6 million unfilled jobs, but only 6.5 million people were looking for work, according to data released last week by the Labor Department. This was the 11th straight month that the number of job openings was higher than the number of job seekers. And each month, the gap has grown.

For two decades, there have been more available workers than available jobs. That changed last year.

Employers have been complaining about a shortage of skilled workers in recent years, particularly workers with advanced degrees in STEM (science, technology, engineering, and math) fields. Nearly every industry now has a labor shortage, but here’s the twist: Employers are having a harder time filling blue-collar positions than professional positions that require a college education.

The hardest-to-find workers are no longer computer engineers. They are home health care aides, restaurant workers, and hotel staff. The shift is happening because more and more Americans are going to college and taking professional jobs, while working-class baby boomers are retiring en masse.

This means that for once, low-skilled workers have the most leverage in the current labor market.

There’s no better time for working-class Americans to demand better wages, benefits, schedules, and work conditions. It also means immigration reform is more urgent than ever. In order to fill all the open jobs and keep the economy growing, Congress will need to allow more low-skilled immigrants to work. Trump’s immigration plan does the opposite.

The new labor market data shows a lot of unfilled jobs that require college degrees — about 1 million in the professional business service sector. That includes lawyers, consultants, and computer programmers. But there are even more open jobs that don’t require that much education, including retail, hotel, and restaurant jobs. There’s also high demand for home health aides to care for aging baby boomers.

These are the kinds of jobs that low-skilled immigrants, often from Latin America, have long helped fill. But Trump’s restrictions on immigration threaten to make the labor shortage worse. Since taking office, his administration has tried to scale back nearly every avenue of legal immigration, ignoring the high demand for unskilled immigrant workers, even at his own golf clubs.

Back in 2017, the Wall Street Journal’s editorial board warned Trump that his restrictions on immigration could hurt the economy.

“If President Trump wants employers to produce and build more in America, the US will need to improve education and skills in manufacturing and IT. But the economy will also need more foreign workers, and better guest worker programs to bring them in legally,” the newspaper said in March 2017.

Darrell West, an expert on technology and public policy at the Brookings Institution think tank in Washington, pointed out in 2013 that the US economy would suffer if Congress didn’t overhaul the immigration system:

America’s immigration system is not designed for today’s economy, and remains largely unchanged since 1965. In fact, of the approximately one million green cards given out by the US in 2011, around 139,000 (or 13 percent) were given out for economic reasons, a number far too small to meet the needs of the world’s largest economy.

Providing more work visas for skilled and unskilled immigrants seems like an obvious solution to ease the labor shortage. But it’s also the one solution Trump refuses to adopt.

Instead, he would rather let businesses continue using undocumented immigrants, who are more vulnerable to exploitation and wage theft — including those his company has hired for decades.

It’s no surprise that his immigration proposal doesn’t include a provision requiring businesses to adopt the E-Verify system, which would allow employers to fingerprint new hires to find out if they have a valid Social Security number on file with the federal government. Trump almost certainly knows that E-Verify would make it much harder for businesses, including his own, to hire undocumented immigrants.

On Sunday, when asked on Fox News why he didn’t include it, Trump said it’s “tough” for farmers and businesses to find authorized workers. He didn’t mention that it would also make it tougher for his own businesses to hire cheap immigrant labor.