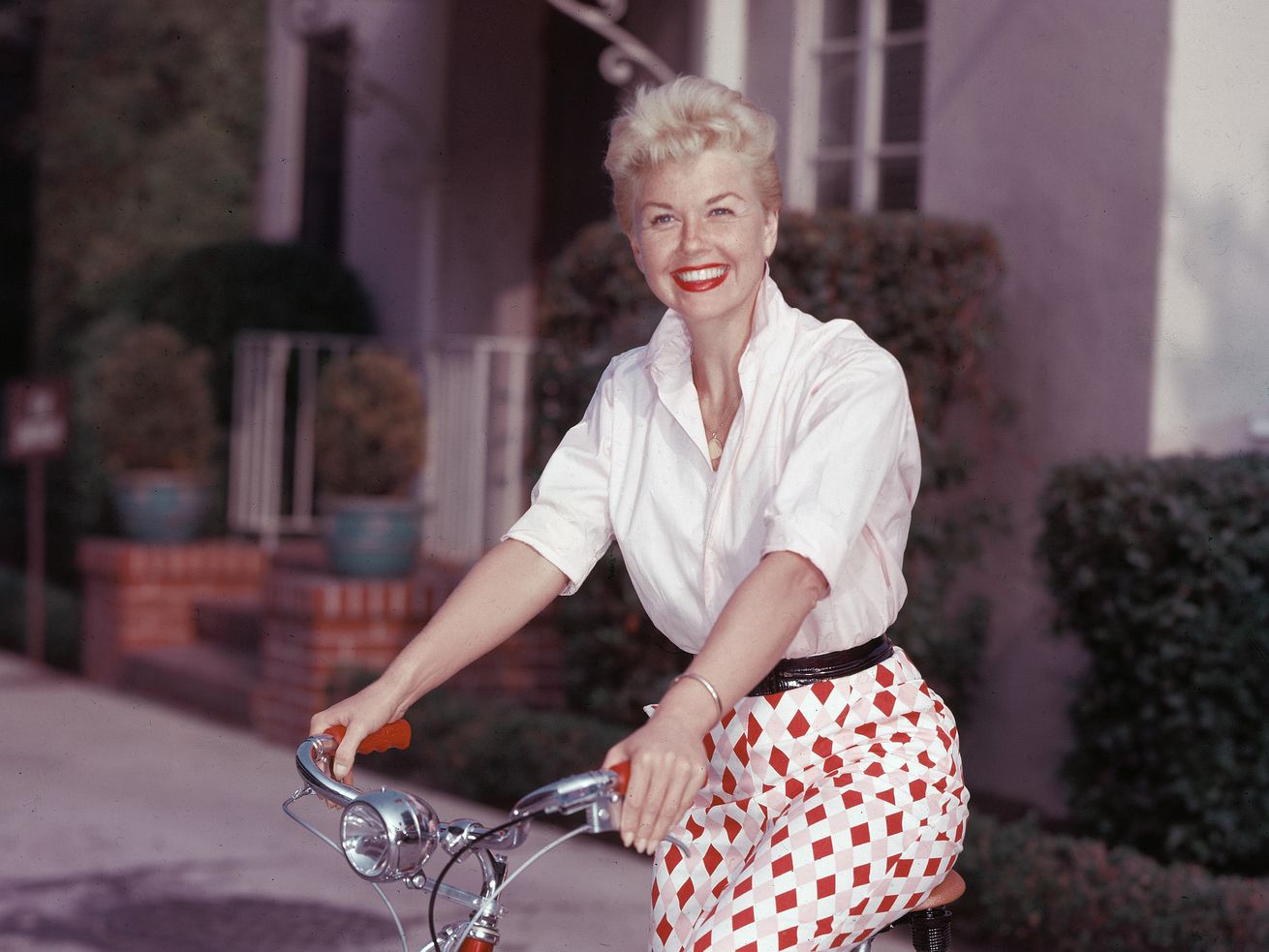 Doris Day, dead at 97, made a paradoxical, patriarchal ideal of womanhood look effortless.

Doris Day, who has died at 97 in her home in California, was a movie star unique even among other movie stars of her era. Her brand of effortless charm and wholesome femininity made her the embodiment of the ideal woman during the late ’50s and early ’60s. She was simultaneously virginal yet sexy, career-focused yet domestic, elegant yet approachable; she didn’t just “enjoy being a girl” — she presented an uncomplicated, nigh-mythical image of womanhood.

Yet Day’s peppy all-American girl persona belied a career full of hard work that made her far more realistic than she seemed — and even as she represented a vanishing vision of the perfect woman, her own life was an example of just how far removed that image was from reality.

Day was the ultimate paradox of the early 1960s: the sexual virgin

Born in Cincinnati in 1922 as Doris Kappelhoff, Day trained as a dancer as a child but got her start as a recording artist, singing first in local nightclubs and on radio before working with swing orchestras in her mid-20s. By her late teens, she’d chosen her stage name and was working with major band leaders like Les Brown. In 1945, at 23, she released her first smash hit, “Sentimental Journey,” which became an anthem of wartime America. By the mid-’40s, she’d appeared as a singer in several films. In 1948, director Michael Curtiz cast her in his film Romance on the High Seas, because he said “her freckles made her look like the all-American girl,” and her lengthy film career began.

For several years during the period between 1960 and 1965, Day was the top box office draw in the country, garnering an Academy Award nod for 1959’s Pillow Talk, as well as a Golden Globe win and four nominations, and two Grammy nominations for Female Pop performer.

Though she quit the movie business in 1968 and focused on devoting the rest of her life to animal charities, like the Doris Day Animal Foundation, Day remained a popular public figure and frequent guest on talk shows and variety shows throughout her life. She later received the Presidential Medal of Freedom in 2004 for her work as an actor and activist, and received an Honorary Grammy Award in 2008. Today, her run of iconic postwar films continues to influence women’s fashion, style, and even lifestyle choices.

It’s easy to see what Day’s basic appeal was. Her voice was fresh and vibrant — she was heavily influenced by Ella Fitzgerald’s vocal style — and she had an energy and vivacity that came through even from her earliest roles.

But Day also had the ability to present an enticing, almost fantastical picture of sexual purity. Take this scene from 1950’s Tea For Two: Framed in soft lighting and posed in a setting that seems anachronistically Victorian, Day manages to make the title song, which is about two lovers on a romantic getaway, seem like an innocently suggestive, but not overly sexual, vacation, all while singing to her uncle.

Even in her saucier films, Day manages to evince a combination of sexual appeal and proper womanly chastity — such as in this scene from 1959’s Pillow Talk, where she expresses overt horror and disgust when confronted with a bachelor pad and intimations of out-of-wedlock sex.

Day had the opportunity to play more dramatic parts — she most notably played James Stewart’s wife in the Alfred Hitchcock thriller The Man Who Knew Too Much, where she debuted her signature song, “Que Sera Sera.” But she always turned away from more nuanced roles in favor of sticking to type in frothier rom-coms — or as they were often dubbed at the time, “sex comedies.”

All of Day’s romantic comedies had a distinct formula designed to reward the female virgin for holding out: Time and again, her cheeky, assertive, yet firmly conservative ways would captivate a bevy of roguish leading men — Rock Hudson, Clark Gable, Cary Grant — and ultimately charm them into giving up their playboy lifestyles and proposing marriage. All of this allows for dramatic situations in which things can be titillating, while stopping short of sexually explicit; critic Pauline Kael called it “the Doris Day routine of flirting with bed but never getting there.”

Day was so successful at purveying the image of a winking, knowing, yet “pure” femininity, in fact, that she became something of a cultural joke for it. An apocryphal quote by comedic pianist Oscar Levant — “I knew Doris Day before she was a virgin” —sums up the attitude of ’60s-era Hollywood about her public persona.

But off-screen, Day’s life was anything but idyllic

Day’s onscreen model of “classic” womanhood stood counter to rapid cultural changes and upended gender norms — and it was a persona she continued to wear proudly. In 1967, Mike Nichols’ attempted to cast her in The Graduate, in what would have been a career-altering turn as Mrs. Robinson, the sexy older woman who seduces Dustin Hoffman’s aimless 20-something. But Day turned it down, noting that the part “offended my sense of values.”

But Day’s personal life stood far apart from the idealized version of womanhood and married life that she represented. “My public image is unshakably that of America’s wholesome virgin, the girl next door, carefree and brimming with happiness,” she told her biographer A.E. Hotchner in Doris Day: Her Own Story. “An image, I can assure you, more make-believe than any film part I ever played.”

Throughout her life, Day struggled through relationships with violent, abusive, and controlling men; she described her first husband, a musician with whom she had one child, as a physically abusive “psychopathic sadist.” Three following marriages were equally unsuccessful; her third husband and agent Martin Melcher controlled her finances and left her $500,000 in debt at the time of his death in 1968 — the same year her final film, With Six You Get Eggroll, was released. Before his death, Melcher also contracted her — without telling her — to a five-year TV series on CBS, The Doris Day Show, and she subsequently wrestled with the network for creative control in order to pay off her debts.

Day returned to cable TV briefly in 1985 in order to promote her chief cause, animal rights and pet care, through a variety and interview show, Doris Day’s Best Friends. The show aired on the Christian Broadcast Network, owned by the virulently homophobic televangelist Pat Robertson — but it gained notoriety because of its connection to Day’s most famous onscreen partner, Rock Hudson.

Hudson was clearly in poor health during a press conference in 1985, in which he announced his appearance on an upcoming episode of Day’s show, first telegraphing to the world that he was very ill. Hudson and Day completed the special, which aired in July of 1985; that same month, Hudson became the first major celebrity to announce that he had contracted the AIDS virus, thereby opening the doors to speculation about his sexual identity. Day recalled the day of filming as bittersweet: “We kissed goodbye and he gave me a big hug and he held onto me. I was in tears. That was the last time I saw him – but he’s in heaven now.” Hudson died just months later in October 1985.

A kind of “Tom and Meg” of their day, Hudson and Day peddled heteronormativity as classic Americana. But Hudson’s status as a closeted queer man, along with Day’s own stature as a woman struggling to control her own financial and professional destiny, complicated that legacy and the wholesome frivolity of their all-American image.

And then there was the strange, dark twist of Day’s own direct brush with the counterculture, when she reportedly narrowly kept her son from joining the cult of Charles Manson.

The story comes to us primarily from Manson trial transcripts and Beach Boys member Mike Love, who writes of the strange three-way friendship that developed between 1967 and 1969 — the year of the murder of Sharon Tate and the Manson family spree killings — between Charles Manson, Love’s bandmate Dennis Wilson, and Day’s son, Terry Melcher.

Melcher was a record producer and a close friend of Wilson. Wilson, who’d gotten chummy with Manson, introduced him to Melcher, and Manson, in turn, hoped to convince Melcher to sign him to a record deal. Though Melcher put off the issue of whether he would sign Manson — Manson just wasn’t that good — he did stay friendly with the Manson family, reportedly even visiting them in the summer of 1969, when they moved to the ranch where they would begin planning their gruesome violent attacks. During this time, Melcher also dated up-and-coming Hollywood star Candace Bergen, who was renting a house in Benedict Canyon house at 10050 Cielo Drive.

Wilson, and frequently Manson himself, visited Bergen and Melcher at the Benedict Canyon house. According to Love, it was Doris Day, who, having become alarmed at the friendship developing between the volatile Manson and her son, convinced Melcher and Bergen to move out of the Cielo Drive house in January 1969. Manson was aware that the couple had moved, but he seemed to have the house fixed in his head as a locus of Hollywood iniquity. So in June of 1969, when Melcher told Manson once and for all that he wouldn’t be signing him to a record deal, Manson immediately turned his anger toward Hollywood itself — specifically, the house on Cielo Drive. He ordered his followers to attack the residence when they began their killing spree on August 8, 1969.

Instead of finding Melcher and Bergen, however, they found Roman Polanski’s pregnant wife, actress Sharon Tate, and a party of her friends. Melcher, deeply shaken by the entire experience, could only testify at the trial while under sedation.

Doris Day was only indirectly involved in this strange series of events; but it’s a shocking and vivid testament of just how dramatically and drastically the world of Hollywood was changing around Day during her peak stardom — and how much the details of her own life undermined the myth of her persona.

In a period characterized by cultural and sociopolitical turbulence, Day’s iconic style was a fixture, an edifice built on an archaic view of womanhood which left little room for flexibility or reinvention. But that static persona continues to capture something indelibly appealing to us even today; on social media, men still speak wistfully of wanting to marry her.

Day was the archetype of the mid-century modern woman, her head looking towards the future, but with her feet firmly planted in the conservative past. It was an unfailingly seductive depiction of a deceptively simplistic view of womanhood — and by pulling it off as well as she did, even today, she still lures us into believing that the myth is real.