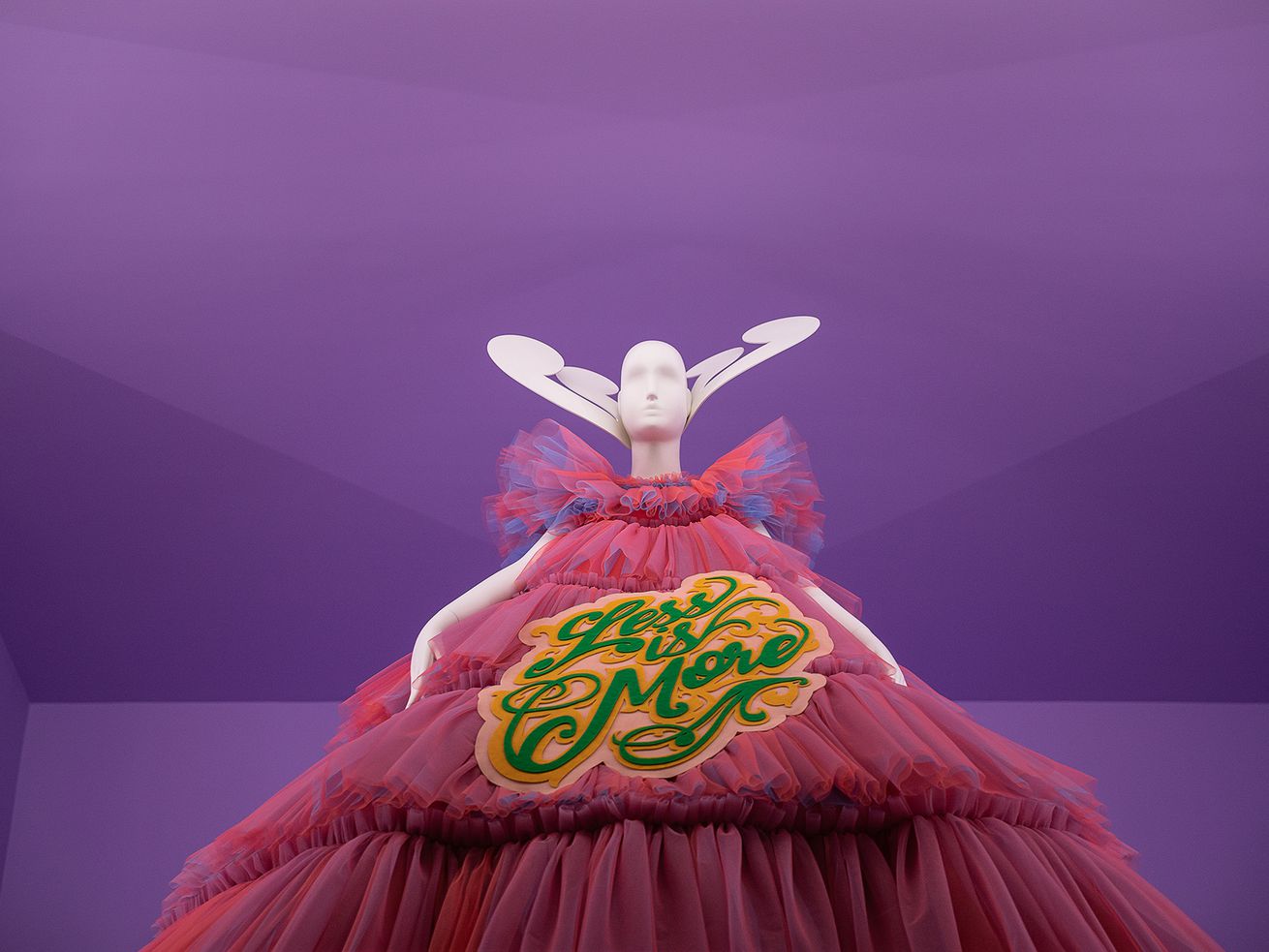 In 2018, the Metropolitan Museum of Art opened what would go on to become the most popular exhibit in its 149-year history: a show all about Catholicism’s heavy influence on fashion, featuring haute couture confections as well as church vestments on loan from the Vatican. The theme guaranteed gaudiness and spectacle, and just as importantly, it was familiar to people from many walks of spiritual life. Fashion gets a bad rap for being too exclusive, too alienating, but “Heavenly Bodies: Fashion and the Catholic Imagination” elided style with one of the most visible and powerful religious organizations in the world.

Its status as the museum’s preeminent moneymaker secured, the Met’s Costume Institute has promptly zagged in the opposite direction. Its big fashion exhibit for 2019, the opening of which will be celebrated tonight at the celebrity-packed Met Gala, focuses on camp — quite possibly the most slippery, hard-to-define concept the curatorial team could have chosen.

“Camp: Notes on Fashion” derives its name from Susan Sontag’s 1964 essay “Notes on Camp,” which unfolds in list form because “jottings … seemed more appropriate for getting down something of this particular fugitive sensibility.” Camp, Sontag writes, is all about artifice, exaggeration, and superficial style over content, and yet it’s “dead serious.” Though she only references two examples of fashion in her essay — “women’s clothes of the twenties,” and “a dress made of three million feathers” — Sontag notes that clothes are frequently the vehicle for a camp sensibility.

To a viewer, Bolton’s admission of inevitable failure should be freeing — it’s an invitation to form one’s own conclusions and to delight in the fantastic fashions that designers have dreamed up, many of them historic or elaborate couture pieces that most of us would otherwise never have the opportunity to see in person. At the preview, a former colleague dragged me through one room to show me a Jean Paul Gaultier top hat made entirely of glossy black human hair. She nearly keeled over in delight.

At the barest minimum, joy in the aesthetic is the point. As Bolton said, “In the end, the ultimate purpose of camp is to put a smile on our faces and a warm glow in our hearts.”

You don’t have to fully understand camp to enjoy the show, but it’s worth trying

Bolton has divided the show into two parts: the historic origins of camp and its influence on fashion. The former, set in a pink-painted gallery (somewhere between Pepto Bismol, Glossier, and a perfume bottle by Gucci, the exhibit’s corporate sponsor) and filled with sculptures, paintings, and letters, grounds camp in 17th century European queer culture. “Louis XIV’s Versailles has been designated — retroactively — as an idealized ‘camp Eden,’” reads the wall text next to a copy of the 1671 Molière play in which the French phrase “se camper” (“to flaunt” or “to posture”) appears for the first time. This starting point is a signal of what is to come: Throughout the show, the influence of people of color on camp does not receive the same air time.

Bolton wanted this narrow gallery to feel claustrophobic, to emphasize camp’s role as a “secret language among gay men” in the build-up to the 19th century. Here, Bolton has highlighted Frederick “Fanny” Park and Ernest “Stella” Boulton, who were lovers and female impersonators eventually tried for “conspiracy to seduce men by wearing women’s clothing.” (They were cleared of these charges.)

Park and Boulton’s letters and photographs are mounted next to a matching set of elegantly ruffled Erdem dresses that designer Erdem Moralioglu based on their drag wardrobes. (Posed with their arms around each other, the Met’s mannequins mimic a photo of the two.) The exhibit is filled with surprising fashion education moments like this, highlighting the thoughtful ways that designers investigate culture and history in their collections. A later section on Oscar Wilde, who was jailed for two years for “gross indecency” and for whom Sontag wrote her 1964 essay, includes several ensembles inspired by or resembling the writer’s style: a black velvet jacket and breeches from Yves Saint Laurent, a Gucci smoking jacket, an Alexander McQueen cape embroidered with two gold peacocks based on illustrations by Wilde’s contemporary Aubrey Beardsley.

After navigating this winding pink corridor, visitors break through into a larger room dedicated to Sontag’s 1964 essay — a spatial representation of the mainstreaming of camp. Bolton has coherently broken down Sontag’s theory of camp, pairing a selection of the essay’s bullet points with the objects referenced within them (a Tiffany lamp, a flapper dress, a dandy’s suit, a Balenciaga dress covered in a delicate layer of feathers), or pieces that help explain them. Below note number 46 (“Camp — dandyism in the age of mass culture — makes no distinction between the unique object and the mass-produced object”) is a Warhol Campbell’s tomato soup print and a minidress made of the same pattern.

Moschino versus Yves Saint Laurent (at left and right, respectively).

Bolton uses Sontag’s distinction between naïve camp and deliberate camp as another opportunity to impart visitors with a fashion history lesson, this time on the ways that designers constantly pay homage to one another’s work. Here, he matches elaborate couture dresses (naive camp) with their intentionally over-the-top descendants. There’s a 1983 Yves Saint Laurent evening dress with an enormous pink bow and a 2017 Moschino dress made to look like a paper doll cutout, with an even more gigantic, two-dimensional trompe l’oeil bow. There’s a black 1951 Balenciaga dress that flares elegantly at the bottom to reveal a pink silk lining, next to Thierry Mugler’s 1995 “Venus” dress, an archival style memorably revived by Cardi B at the 2019 Grammys that opens upward like an oyster shell. It’s a smart way of tracing the lineage of a look while simultaneously illustrating the idea of camp.

Following through on the idea of the gallery spaces mimicking the covert or mainstream nature of camp language, the second part of the exhibit lives in one immense, darkened room. Each wall has been transformed into a multi-colored, double-decker display case, with one set of clothing at eye level and another high above. It’s overwhelming in the best way, filled with latex dresses resembling cuts of meat, banana skirts, mountainous tulle dresses, and platform Crocs by Balenciaga, to name just a few. Cacophony was the aim: Each item of clothing is paired with a different definition of camp, from Sontag but also writers, designers, and academics like Richard Dyer, Jack Babuscio, Philip Core, and Geoffrey Beene. At the end of the day, camp has an infinite number of definitions.

The Costume Institute’s achievement last year — putting on the biggest exhibit in the Met’s history — signals an important shift within the museum, and the art world more broadly: Often considered a less serious art form than, say, painting or sculpture, fashion has become a reliable moneymaker for museums like the Met, which has faced financial challenges in recent years. The costume department’s winning streak began in 2011, with the success of “Alexander McQueen: Savage Beauty,” which was then surpassed in foot traffic by 2015’s “China: Through the Looking Glass” and 2016’s “Manus x Machina: Fashion in an Age of Technology.”

Staging a blockbuster puts a great deal of pressure on the curatorial staff to achieve similar heights in subsequent years — Bolton says as much in The First Monday in May, a documentary about the making of the China exhibit, calling the McQueen show “a bit of an albatross” — but for the institution at large, it’s clearly a financial boon. And other museums have followed suit, with New York’s Museum of Modern Art putting on its first fashion exhibit in decades two years ago and the Philadelphia Museum of Art mounting its largest fashion show ever in 2018. You can now regularly find fashion exhibits everywhere from London to Dallas.

One force behind the rise of the Costume Institute is Anna Wintour, the longtime editor in chief of Vogue and a Met trustee. She oversees the Met Gala, going so far as to decide what people wear, and in her time running the show has turned it into not only the biggest night in American fashion, but a major celebrity event in its own right. Last summer, the party served as the staging ground for the central heist in Ocean’s 8 — proof that it’s transcended the confines of the fashion world. The Met Gala’s pop cultural significance fuels the Costume Institute’s well-being: In addition to providing abundant publicity for the department’s exhibits, the event is, at the end of the day, its annual fundraiser.

On the red carpet, camp will be interpreted all over again by the throng of celebrities attending the Met Gala, which typically draws some combination of Kardashian-Jenners, Beyoncé, Lady Gaga, and whoever else is blowing up at the moment. Framed as a pure celebration of fashion, the evening is an opportunity for entertainers to take the biggest sartorial swings imaginable — Rihanna dressed as a sultry pope, or Katy Perry wearing enormous angel wings — and with a theme like camp, there’s no way they hold back.