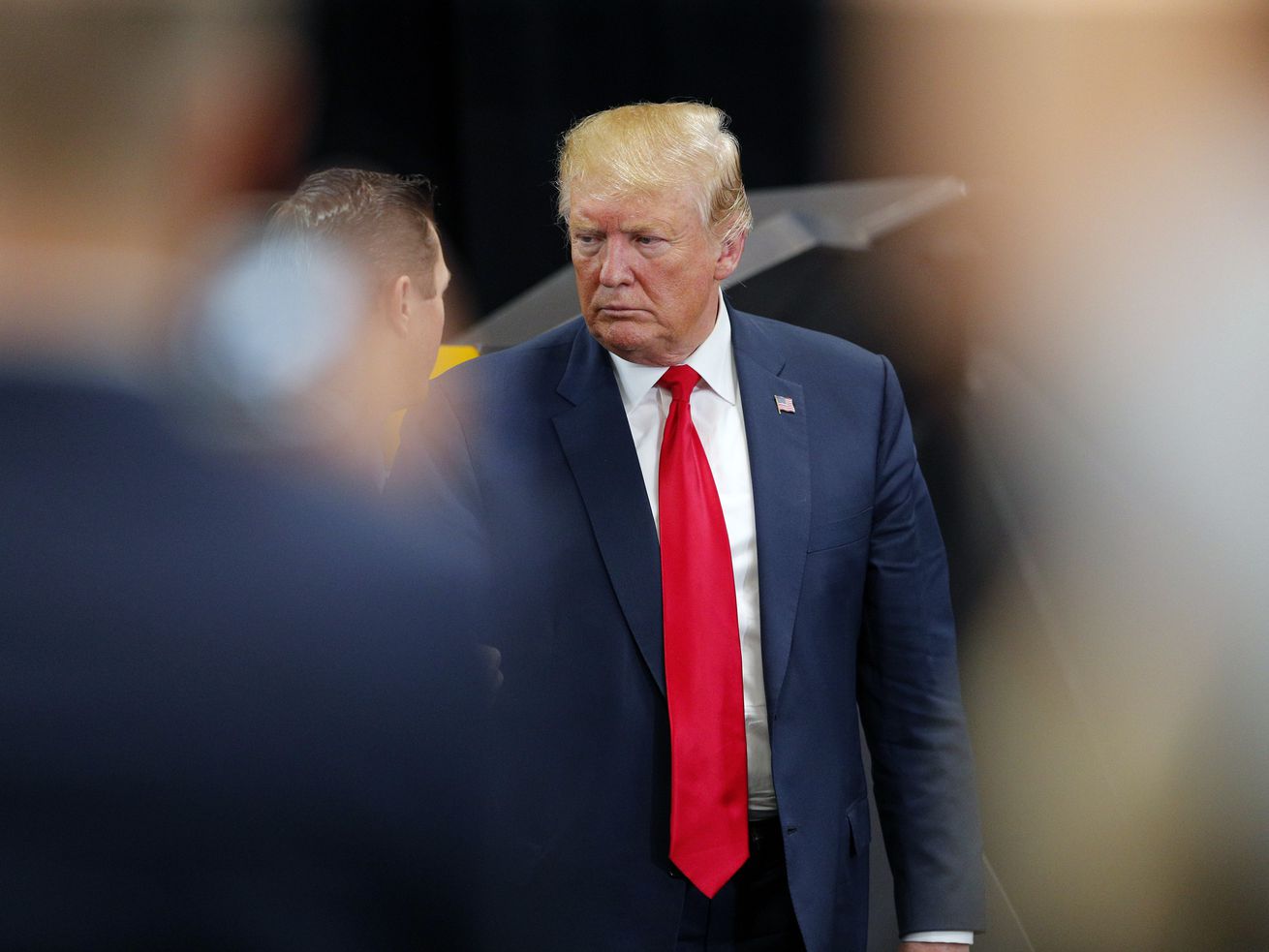 President Trump sent the stock market tumbling early Monday with a weekend tweet threatening to levy more extensive tariffs on imported goods from China — launching another round of the seesaw between the president’s love of record Dow Jones closings and his firm belief in the merits of coercive trade policy.

The specific assertions Trump made, including the idea that “China” bears the majority of the cost of the tariffs imposed on American buyers of Chinese goods, were mostly incorrect. After his tweet, the Dow plunged 450 points on Monday morning.

But trade protection is something Trump has believed in for years, and it’s actually an issue on which he seems to have some support from Democrats on Capitol Hill — including Senate Minority Leader Chuck Schumer, who specifically urged him to “hang tough.” But talk of tariffs tends to rattle financial markets, both because the actual tariffs themselves are costly to the United States and because they inevitably raise the prospects of further rounds of tit-for-tat retaliation.

China is valuable to American companies as a platform for manufacturing US-branded goods that are sold around the world and as a consumer market for American exports. Higher tariffs on some Chinese goods are not the end of the world, but a total rupture in US-China trade would be.

Trump tweeted a mix of lies and threats

The US and China have had a range of trade disputes for years, with longstanding tensions ratcheting up after Trump took office. Vice Premier Liu He was scheduled to arrive in Washington this week for talks on this subject, and around noon on Sunday, Trump decided to throw a twist into the plot with a couple of tweets threatening an escalation of American pressure.

….of additional goods sent to us by China remain untaxed, but will be shortly, at a rate of 25%. The Tariffs paid to the USA have had little impact on product cost, mostly borne by China. The Trade Deal with China continues, but too slowly, as they attempt to renegotiate. No!

The idea that “China has been paying Tariffs to the USA” is a pretty wild misreading of the situation.

The way a tariff works is that it’s basically like a sales tax, except instead of being paid on all goods, it’s paid only on imported goods. As with any kind of tax, a tax on Chinese-made goods is obviously bad for Chinese manufacturers. But as with any kind of tax, the financial price is paid in large part by consumers of Chinese-made goods — and, critically, by consumers of domestic goods that compete with Chinese-made ones. Once Trump levies tariffs on Chinese-made appliances, for example, not only does that tend to force Chinese manufacturers to raise prices, but it also tends to encourage American manufacturers to raise prices too since they no longer face as much price competition from China.

“It’s just another example of taking where there’s a tiny germ of truth and blowing it up to the point where it’s absurd for his own political purposes,” Michael Klein, a professor of international economic affairs at the Fletcher School at Tufts University, told her in November.

Then Monday morning, Trump followed up with another classic Trumpism — simultaneously misstating the scale of the US trade deficit with China and totally mischaracterizing what it is.

The US trade deficit in goods with China was about $400 billion last year, not $500 billion, and we had a surplus in services.

More to the point, when one country runs a trade deficit with another, that does not constitute “losing money.”

When foreigners invest in the United States — buying shares of stock in American companies, buying the bonds sold by the US government, financing the construction of houses and office buildings — it generates a pool of money that has to go somewhere. Some of it goes back abroad in the form of American investment in foreign countries. But on balance, foreigners invest more in the United States than Americans invest abroad. That investment surplus allows Americans to buy more goods and services from abroad than we sell to foreigners — a trade deficit.

These numbers need to balance out, and there’s nothing inherently good or bad about either of them. The fact that the United States tends to run a trade deficit is most likely a reflection of the fact that the American population is growing faster than that of other rich countries, so it’s a better place to invest.

It’s not really clear if Trump genuinely doesn’t understand these points or just enjoys lying, but either way, he is very wedded to these two widely debunked talking points, and most people have sort of tuned it out at this point. But actions speak louder than words, and talk of tariffs has people nervous.

The risk is escalation, not tariffs

If Trump follows through on his threats, American consumer prices will rise modestly and it will be a smallish problem for most people and a larger windfall for a small number of people who run companies that compete with Chinese imports.

There will also inevitably be specific problems and perversities. Trump has put tariffs on imported metals, for example, in order to boost American manufacturing. But many American manufacturers rely on imported metal, and this policy has been very detrimental to companies that make nails. Similarly, while broad tariffs on Chinese imports will help some American companies by undermining their Asian competitors, it will also hurt American companies that rely on Chinese suppliers to make components for them.

All things considered, however, inflation is not a big problem in America right now, so higher prices are not the end of the world. What’s more, China will likely respond in part by reducing the value of Chinese currency, which will partially offset the price impact in the United States at the expense of reducing the purchasing power of Chinese consumers.

Which gets to the real worry financial markets always have about tariffs, which is not so much the tariffs themselves as what comes next. China could retaliate by cutting purchases of American agricultural goods, buying European airplanes rather than American airplanes, or trying to bias the domestic Chinese auto market against American brands. At that point, talks aimed at deescalation might get back under way. But the US could also counter-retaliate. This kind of “trade war” between the world’s two largest economies could spiral out of control and end up severely damaging the global economy.

Trump’s aides tend to say that this is all overstated. That the basic reality is the US economy is in a strong position, that Chinese leaders’ own position is more tenuous, and that Trump is simply an aggressive negotiator playing for advantage. On the other hand, obtaining that advantage requires him to credibly act like someone who doesn’t understand — or doesn’t care about — the potential harms of a giant trade war. The problem is he’s sometimes much too convincing about it.

By late morning Monday, however, the stock market seemed to have bounced back, convinced that the whole thing was likely to blow over. For Trump, it’s an inherently difficult line to walk: How can he convince the Chinese he’s serious without alarming investors that he really might be?