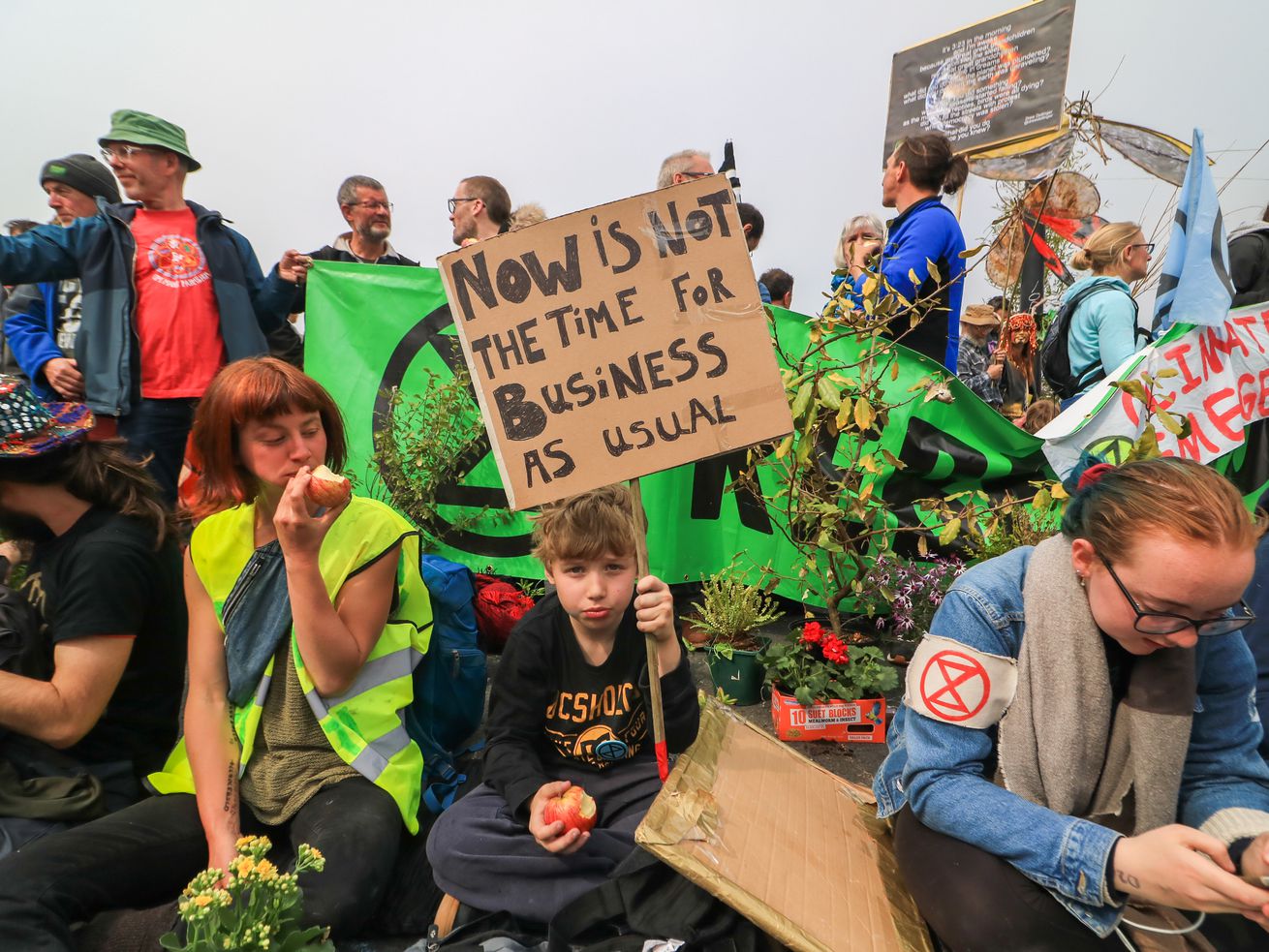 Activists want the UK to commit to zero net emissions by 2025. Is that possible?

Thousands of activists with colorful costumes and tents have cultivated strategic disorder in orderly London over the past nine days. They’ve barricaded roads and bridges and gotten arrested to draw attention to the accelerating climate crisis. And they’re holding their ground.

The coordinated direct actions across the city have been organized by Extinction Rebellion, a movement founded last year to demand a more aggressive climate target from the government of the United Kingdom: net-zero greenhouse gas emissions by 2025.

With a message that climate change is an “emergency” that threatens the survival of the human species, Extinction Rebellion is sounding a shriller alarm than past climate protests. They’re also deploying nonviolent but ostentatious tactics — such as gluing themselves to the Waterloo Bridge — at a scale that “has never been done before,” according to Alanna Byrne, a press coordinator with Extinction Rebellion.

“We know we have disrupted your lives,” the group said in a statement Wednesday. “We do not do this lightly. We only do this because this is an emergency.”

Extinction Rebellion’s urgency and energy on climate change is aligned with a rising wave of youth climate activism bubbling up in Europe, the United States, and beyond — including a series of student strikes, led by the forceful and riveting Greta Thunberg, a 16-year-old from Sweden.

Thunberg arrived in London on Sunday to join the Extinction Rebellion protests and deliver a fiery speech to British members of Parliament, whom she says have failed to take climate change seriously: “You don’t listen to the science because you are only interested in solutions that will enable you to carry on like before,” she chided.

If a protest is measured by how much attention and irritation it stirs up, then Extinction Rebellion has been wildly successful. London Mayor Sadiq Khan, Conservative member of Parliament Boris Johnson, and media celebrities have all called the protesters a nuisance and asked them to stop. A couple of lawmakers and the actress Emma Thompson have rallied behind them.

“I think Extinction Rebellion is extremely important,” Edward Maibach, director of the Center for Climate Change Communication at George Mason University, told Vox. “They’re showing how much they care and that they’re willing to pay the price — be arrested — because government inaction on climate change is unacceptable. I hope it catches on.”

Yet as the protesters transition this week from disrupting transit — they’ve said they will end the last two blockades Thursday — to pleading with policymakers, new questions have emerged: How quickly can the UK get to net-zero emissions? And will Extinction Rebellion make a difference in setting that target?

A brief history of Extinction Rebellion

Extinction Rebellion began in the minds of 15 organizers in April 2018 who were part of the UK activist group RisingUp!. The premise was that a more rebellious resistance was needed against “business as usual” and that governments needed to be pressured more to cut greenhouse gas emissions to zero.

Extinction Rebellion, also known as XR, officially launched in October, a few weeks after the Intergovernmental Panel on Climate Change (IPCC) released a massive report on the impacts of global warming of 1.5 degrees Celsius. Its key message, which reverberated around the world, was that humanity still has a shot at limiting warming to 1.5°C, and thereby avoiding further catastrophe in the form of disease, famine, water scarcity, and sea-level rise. But time is running out — we may have as little as 11 years left to hit that target, and we are way off track.

The movement also burst onto the scene with the explicit support of the leftist Guardian columnist George Monbiot, who wrote on October 18 that “a people’s rebellion is the only way to fight climate breakdown.”

The movement introduced its “Declaration of Rebellion” at London’s Parliament Square October 31, with the goal of “peaceful civil disobedience, traffic disruption, and symbolic criminal actions” highlighting the British government’s inaction on the climate emergency.

In November, XR shut down several streets in London and targeted government buildings with acts of mass civil disobedience. These, according to XR, would be “minor inconveniences when compared to the potential extinction we are facing.”

XR does not feature any individual leaders on its website. Rather, it describes itself as “a movement that is participatory, decentralized, and inclusive.” Its mission is to get 3.5 percent of the population involved in changing the system — using ideas such as “momentum-driven organizing.” Spinoff groups have now formed in dozens of countries, including the US.

On April 15, XR began a fresh round of actions to shut down London, some of which have extended for nine days. They took a large pink boat emblazoned with the words “Tell The Truth” to Oxford Circus, staged a “die-in” at the Natural History Museum to bring attention to the mass die-off of species, barricaded roads, locked and glued themselves to the Waterloo Bridge, and sat in trees in Parliament Square. Actress Emma Thompson appeared at the Oxford Circus event on Friday.

As of Tuesday, more than 1,000 people had been arrested in the protests, most of them for violating orders about where protests are permitted.

While they did not completely shut down the city of 8.1 million, they did cause considerable disruption, prompting the irritated mayor of London, Sadiq Khan, to tweet on Sunday that the protests had become “counter-productive” and that the protestors should “let London return to business as usual.”

UPDATE: My message to all the climate change protestors today is clear: let London return to business as usual. pic.twitter.com/2o5jwbwLC2

Climate experts took this as an opportunity to point out that “business as usual” in the context of climate change means utterly catastrophic global warming.

Former London Mayor Boris Johnson, who’s now a member of Parliament, also scolded the protesters and encouraged them to instead blame China for its greenhouse gas emissions. “Surely this is the time for the protesters to take their pink boat to Tiananmen Square, and lecture them in the way they have been lecturing us,” he wrote in the Telegraph. (China does contribute a large and growing share of global emissions — which must be slowed down and reversed — but most of the warming we’re experiencing now is due to the past emissions of wealthier countries like the UK and US.)

Yet not all Londoners were unhappy with the disruption, and many tweeted about how much they enjoyed the opportunity to participate.

After watching David Attenborough’s Climate Change doc, my mum and dad joined me on their first ever act of civil disobedience on Waterloo Bridge @extinctionR. They had a great time and I’m so proud! #ClimateChaos #InternationalRebellion pic.twitter.com/1j4JmHkcSd

The protestors want three things from the UK government:

“We don’t want to be doom and gloom, but we also think it’s really, really important to use emergency messaging,” said XR’s Byrne. “One of the major problems that we have is that so many people are not aware of the crisis we’re in and we want the government to be talking about it.”

While the UK government is already mired in Brexit negotiations that have continued to drag on, protestors argue that climate change poses an even bigger threat to the long-term health and security of the country and deserves the same, if not more, political attention.

As for the citizen assembly, campaigners say that this is a way to address the inherent inequities of climate change — that the people who contributed the least stand to suffer the most — and to bring more solutions to bear.

It’s also a way to make sure everyone is included in a decision-making process that could ripple throughout all of society. “We don’t think the government is capable of sorting this out themselves,” Byrne said. “We need expert knowledge on this, we need everybody to have a say in how we move forward.”

But precisely how to move forward right now remains unclear. Activists are currently talking to members of parliament as they return from a recess.

“We are going to carry on until the government is willing to come and speak to us and implement our demands,” Byrne said. “We need some sort of Green New Deal emergency set of policies basically to move forward.”

Is net-zero emissions by 2025 a reasonable goal?

XR’s demand for the UK to commit to net-zero emissions by 2025 comes at an interesting moment. The UK is already committed to 80 percent reductions by 2050, and as Vox’s David Roberts has reported, that’s been going pretty well so far, as coal has declined dramatically.

But the hardest work lies ahead: the country now must tackle “emissions from aviation, agriculture, biomass, and above all transportation, which in the UK (as in the US) is now the largest source of emissions.” Oh, and gas boilers; the UK has a lot of those.

As the Swedish teen activist Greta Thunberg pointed out in her speech to Parliament on Monday, another obstacle to net-zero emissions by 2025 is that the UK is still developing new fossil fuels.

“The UK’s active current support of new exploitation of fossil fuels — for example, the UK shale gas fracking industry, the expansion of its North Sea oil and gas fields, the expansion of airports as well as the planning permission for a brand new coal mine — is beyond absurd,” she said.

On May 2, the Committee on Climate Change, an independent body tasked with advising the UK government on emissions targets, will deliver a long-awaited report on how and when the country can reach net-zero emissions. (The CCC declined to comment for this story.) The CCC is expected to propose 2050 as the net-zero target. “2050 is do-able and desirable and would have an insignificant overall cost to the economy,” Lord Turner, chair of the Energy Transitions Commission, told the Observer.

But UK politics seems to be shifting in favor of tougher climate targets. As Dawn Foster writes in Jacobin, “Whereas [former Prime Minister Tony] Blair’s government would have clamped down hard on the protestors and [former Labour Party leader] Ed Miliband’s Labour would have condemned, or at least refused to support, the protestors, Labour now see the protests as an opportunity to nail the Conservatives for ignoring climate change and the environment.”

But some in the UK government have already dismissed the XR demand, claiming that net zero by 2025 is politically impossible. “Yes, you could decarbonize Britain by 2025 but the cost of implementing such vast changes at that speed would be massive and hugely unpopular,” Turner told the Observer.

Nonetheless, in this moment of crisis, young leaders like Thunberg will keep reminding us of how resourceful humans can be in the face of a challenge. “Sometimes we just simply have to find a way. The moment we decide to fulfill something, we can do anything,” she said. “And I’m sure that the moment we start behaving as if we were in an emergency, we can avoid climate and ecological catastrophe. Humans are very adaptable: We can still fix this.”