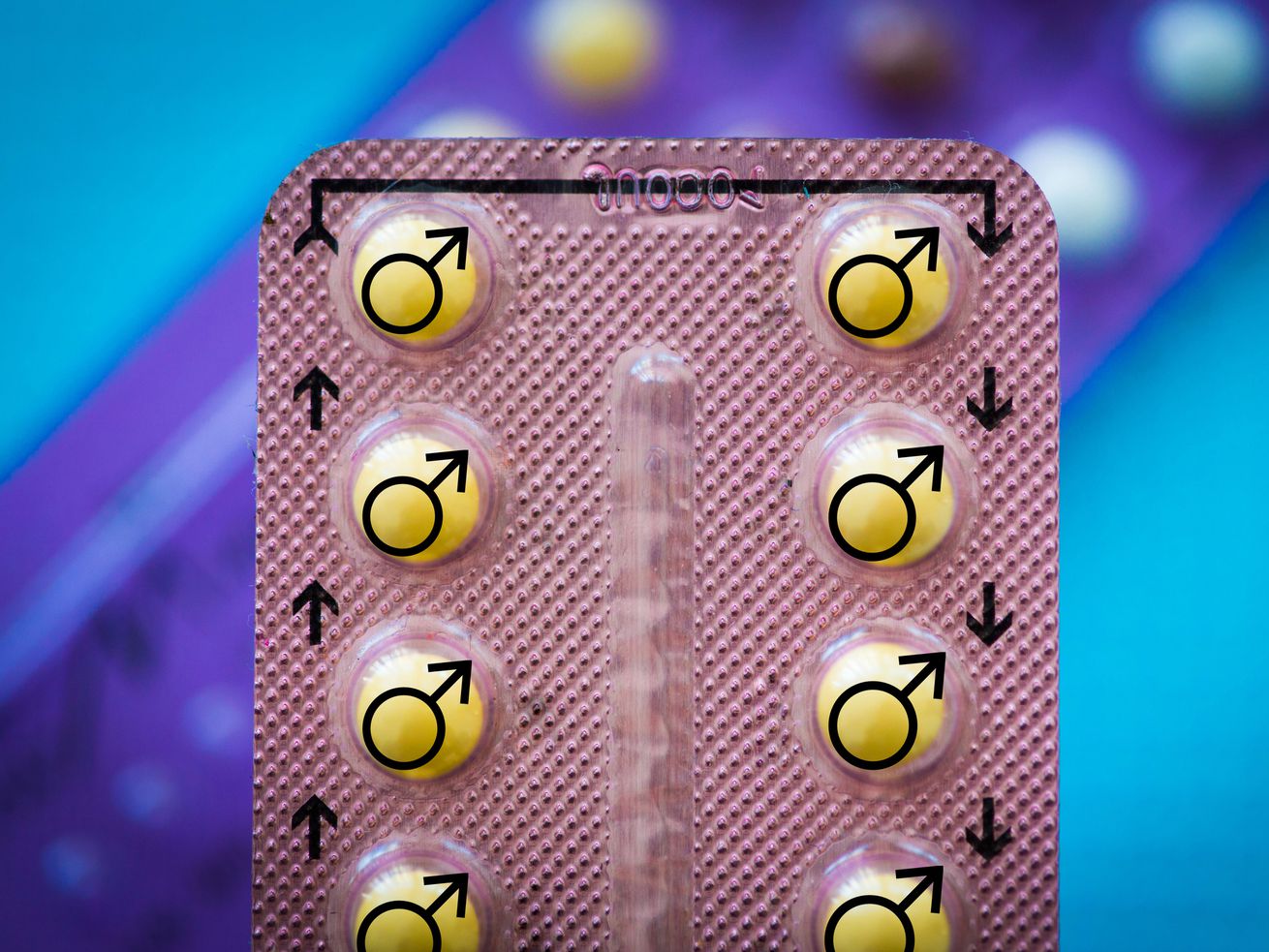 A pill, a gel, and a nonsurgical vasectomy are making their way through clinical trials.

Sexually active men have scant options to control their fertility: They can get a vasectomy, use condoms, or try the dubious “pullout” method.

These choices are far from ideal. Condoms can be cumbersome, vasectomies require more surgery to reverse, and pulling out is, well, not exactly a reliable form of birth control. That may be why a majority of men in surveys have said they’d welcome a hormonal birth control pill, and also why most leave birth control to their female partners.

Every once in a while, breathless headlines appear suggesting a new male contraceptive is right around the corner.

Yet the new options never seem to materialize. If they did, public health researchers have estimated, we’d see the rate of unplanned pregnancies tumble.

While a pill for men certainly isn’t coming to the pharmacy anytime soon, unfortunately, there is reason for (muted) hope. Several promising products are quietly making their way through clinical trials. A topical gel that blocks sperm production is the furthest along in development, followed by a hormonal pill contraceptive and a nonsurgical vasectomy.

But before we get into the new science of male contraception, it’s essential to understand why discoveries in this arena have been lacking for so long.

Men are often blamed for the slow progress toward more male contraception options and the fact that women still bear most of the birth control burden.

Late in 2016, for example, a big clinical trial of a hormonal contraceptive injection for men had to be stopped because of concerns about side effects — and the men in the trial were accused of being too wimpy to handle the discomfort women on the Pill face every day.

In reality, 75 percent of the study participants wanted to continue using the shot. And it was actually one of the two independent committees monitoring the trial’s safety data that was so concerned about adverse events that it shut down the trial.

Men want more birth control options. But the truth about the slow progress is that the science of finding new methods, and getting those new methods approved for market, has been incredibly difficult.

The first challenge is overcoming biology. “The male produces hundreds of millions of sperms every day, and when the ejaculate comes out, there are 250 million sperm,” said Michael Skinner, a reproductive biologist who studies male contraceptives at Washington State University. “We could probably get away with a tenth of that and still be fertile.”

Women, by contrast, only produce one or two eggs a month. Shutting down the male system while keeping men healthy is a daunting task on a simple numbers basis.

Male contraceptives also need to be at least as safe and effective as the options available to women — another daunting challenge to overcome given all the competition already out there.

For these reasons, pharmaceutical companies have all but abandoned the quest to find new male birth control options, said Christina Wang, an expert on contraceptives at the Los Angeles Biomedical Research Institute at Harbor-UCLA Medical Center. This has left the research, and the funding of it, to governments.

“For many countries, there was a period when the World Health Organization was funding or supporting [male contraceptive research],” Wang said. “Now it’s the National Institutes of Health in the US.”

Despite these challenges, however, there has been progress.

More than a decade in the making, the male birth control that’s furthest along in clinical trials is a gel called Nestorone-Testosterone.

The gel contains testosterone and a progestin, which is a synthetic form of the female sex hormone progesterone. (Men have progesterone too, but usually only at low levels.)

The progestin in the gel, which is meant to be applied to the arms and shoulders every day, works to shut down the gonadotropin hormones responsible for stimulating testosterone production in the testes, according to Diana Blithe, chief of the contraceptive development program at the NIH’s National Institute of Child Health and Human Development. And since sperm production is dependent on very high testosterone levels in the testes (much higher than the testosterone levels in the blood), shutting the gonadotropins lowers sperm production.

But there’s a catch: When you lower the testosterone in the testes, testosterone levels in the blood also drop — and that can lead to nasty side effects like low libido or problems with ejaculation.

So that’s why the gel contains some replacement testosterone, “to keep everything functioning but not start sperm production again,” said Blithe.

In a 24-week study, published in 2012 and funded by the National Institute of Child Health and Human Development, the gel suppressed sperm levels in nearly 90 percent of men to 1 million per milliliter or less — the amount needed to prevent pregnancy — with few side effects.

Now a major, multicenter trial, involving 420 couples in the US, UK, Chile, Sweden, Kenya, and Italy, is underway, testing the gel’s effectiveness in preventing pregnancies. The male partner will start using the gel every day, and once his sperm count is low enough, the couple will rely on only the gel for contraception for 12 months.

“It’s the furthest along [of all male birth control methods],” said Blithe. If the gel continues to appear safe and effective, the researchers behind the study will move into a phase three study involving an even larger number of couples.

But that means the product still has a ways to go before potentially hitting the market. “We’re talking about 10 years from now for the product that’s the furthest along,” Blithe added.

An additional challenge in the quest for a male pill: The sperm-suppressing hormone changes that the drug induces tend to clear the body so quickly that they require more than a once-daily dose.

But researchers are now inching toward a pill for men that seems to overcome that problem. In a recently published 100-person randomized controlled trial, researchers showed that a male birth control pill — dimethandrolone undecanoate, or DMAU — appeared to be safe when used every day for a month.

The effects of the drug also stuck around in the blood for at least 18 hours, suggesting DMAU would only need to be taken once per day.

“That’s critical for people being able to use it effectively,” explained Stephanie Page, a professor of medicine at the University of Washington and the study’s senior investigator, since most people have trouble remembering to take a pill once a day, let alone twice.

The drug works in a similar way to the birth control gel. DMAU is a steroid molecule that has properties of both testosterone and progestin, and the hormone changes the researchers tracked in the study suggested that the pill suppressed sperm production. But researchers don’t yet know that for sure.

“We didn’t actually measure sperm suppression because the study was too short,” Page explained. They did, however, see that the drug was very well tolerated, and that there weren’t significant side effects that would stop drug development. Another ongoing study is looking at whether the pill translates into an effective birth control method for men.

This is why Page has called DMAU “a major step forward in the development of a once-daily ‘male pill.’”

Separately, a sperm-suppressing male birth control pill that acts through the same mechanism as DMAU is also under testing, with promising but preliminary outcomes. At the 2019 Endocrine Society meeting, researchers shared the (yet-to-be-published) results of a placebo-controlled, double-blind study involving 40 healthy men. They were randomly assigned to get either a placebo or the drug — known as 11-beta-MNTDC — for 28 days. At the end, the researchers found the drug was “well tolerated” in the men who took it, and reduced the hormones needed for sperm production. But again, it’ll be years before it’s available to men.

That’s because getting a male pill to the market won’t be easy.

“When the female pill was introduced, the doses of hormones were higher than they are now and the side effects were much greater,” Page said. Today, the Pill has very mild side effects for most women. “So the bar is higher in terms of where we need to be to get something into the market. … The goal is to develop something for men that is essentially side effect-free.”

Researchers at Los Angeles Biomedical Research Institute at Harbor-UCLA Medical Center and the University of Washington are also currently recruiting volunteers to test an injectable form of DMAU. Though this will be the first study in men, research in animals has shown that injectable DMAU could suppress sperm for several months at a time — and that sperm levels return to normal levels after the injection wears off.

“We think the DMAU injection will have a slower release, so it’s anticipated that that could be [like] a Depo-Provera for men, as opposed to needing to take a pill a day,” Page said. But that theory still needs to be tested.

A vasectomy is a surgery that involves cutting or tying the vas deferens to stop sperm from entering the urethra and getting passed along to a female sex partner.

Researchers in India have gotten fairly far in the development of a nonsurgical vasectomy called RISUG, which stands for reversible inhibition of sperm under guidance.

The idea, discovered by biomedical engineer Sujoy Guha of the Indian Institute of Technology, involves injecting a polymer gel into the vas deferens to block sperm, rather than cutting or tying the vas (a vasectomy). And the treatment can be reversed with a shot that breaks down the gel.

According to Bloomberg, RISUG should launch in India within the next couple of years:

The procedure is 98 percent effective at preventing pregnancy — about the same as condoms if they are used every time — and has no major side effects, according to R. S. Sharma, head of reproductive biology and maternal health at the Indian Council of Medical Research. About 540 men have received it in India, where it continues to prevent pregnancies in their partners 13 years after treatment, he said.

A submission to regulators this year will seek approval for RISUG as a permanent method of birth control. That will be appended with clinical data supporting reversibility, Sharma said. India has more married women with an unmet need for family planning than any other country, and social stigma and a lack of privacy in stores has kept condom use to less than 6 percent.

But it won’t hit the US market anytime soon. A Berkeley, California-based nonprofit called the Parsemus Foundation has licensed the RISUG technology here. And the related product they’ve developed, Vasalgel, is only in the preclinical phase of testing.

According to Parsemus, the results from rabbit and monkey studies are promising. But there’s no human trial scheduled yet. So despite the hype about Vasalgel, it’s still much further off than the pill and gel methods of male birth control.

More choices would also benefit women. Researchers who have modeled the impact of a new male contraceptive estimate that even if only 10 percent of interested men took up the novel method, we’d see unintended pregnancies fall by up to 5 percent in the United States and South Africa and by as much as 38 percent in Nigeria.

“The more choices we have, the less likely we are to have unplanned pregnancies,” Page added. “And I think that’s what everyone wants.”