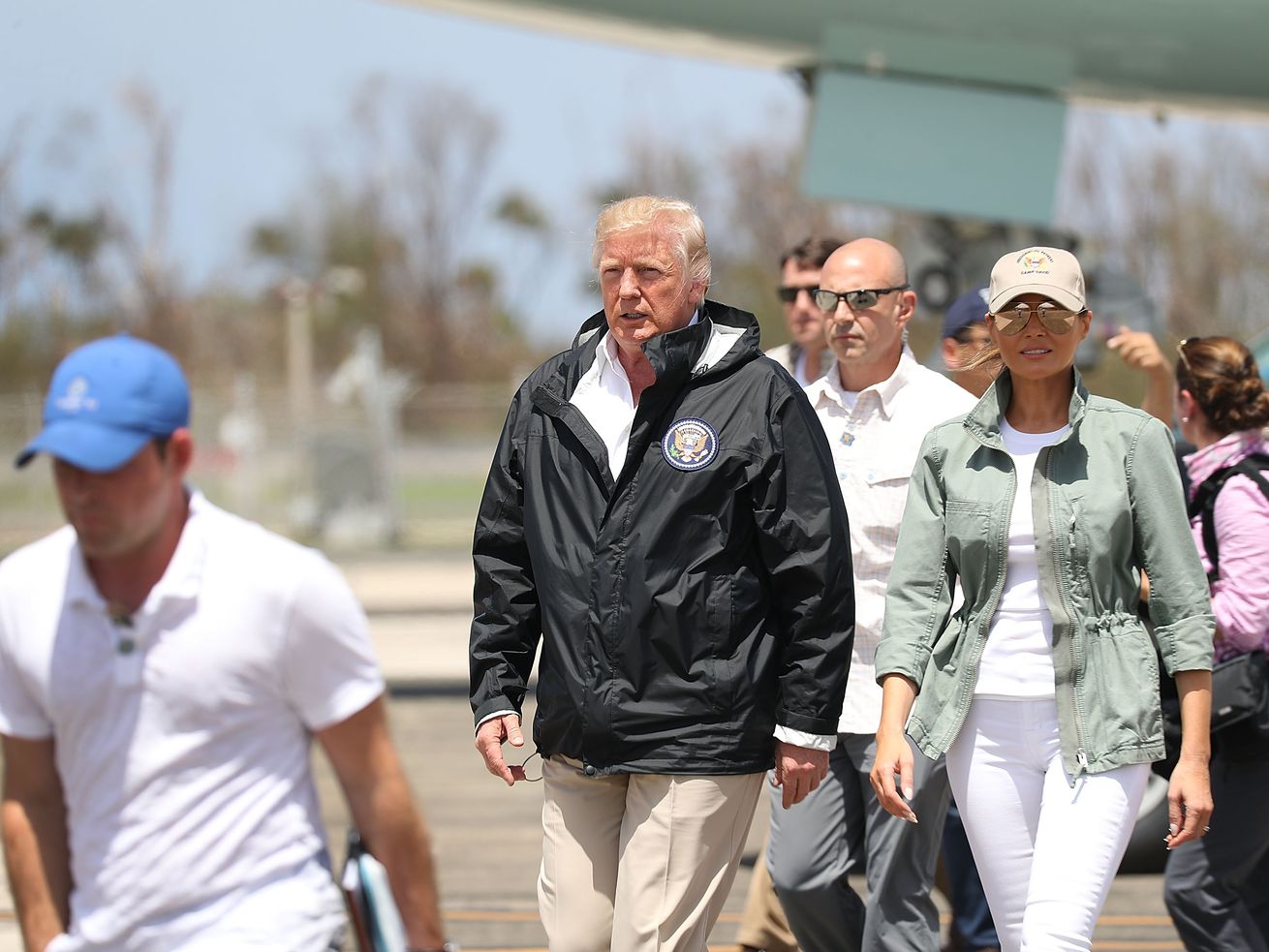 Trump told senators he thinks Puerto Rico got too much funding compared to mainland states.

Two weeks after a “bomb cyclone” storm, the American Midwest is still underwater. The South is still reeling from storms and hurricanes months later. And an ongoing disaster is still underway in Puerto Rico, which experienced the deadliest natural disaster in US history in 2017’s Hurricane Maria and last year’s Hurricane Michael.

But help from the federal government isn’t on the way yet — and there’s no telling how much longer it might take.

Congress is at a stalemate over a multibillion-dollar disaster relief funding package, after President Donald Trump made it clear that he doesn’t think Puerto Rico deserves to get any more money. Trump told Senate Republicans this week, during a private luncheon, that he thought Puerto Rico was getting too much relief aid compared to other states. This comes after the president privately told aides he didn’t want “another single dollar going to the island,” the Washington Post reported.

The Senate Republicans have a bill that would give $13.6 billion in disaster money, including relief to Kansas, Missouri, Iowa, and Nebraska, which experienced recent flooding. The bill also provides $600 million for Puerto Rico’s food stamp program, which runs out of funding next week and supports 40 percent of the island.

But Democrats, who saw the House pass their own $14 billion bill in January and have now been waiting two months for Senate Republicans to act, say that’s not nearly enough for Puerto Rico. Their bill included hundreds of millions of dollars to rebuild water resiliency in the US territory, established 100 percent federal cost-sharing for recovery efforts in Puerto Rico, and awarded $703 million for nutrition and Medicaid assistance to Puerto Rico, Northern Marianas, Guam, and American Samoa. Democrats say the only way disaster relief funding will pass is if the Senate passes the House version, or agrees to negotiate. But Trump has told senators he will only support funding food stamps for Puerto Rico — not additional infrastructure aid.

Republicans are attacking Democrats for playing politics with people’s lives.

“Sen. Schumer has stopped this bill,” Sen. Rick Scott (R-FL) says. “I don’t know when we are going to get it done. Now, let’s remember when [Hurricane] Sandy hit, he was very vocal — 91 days was long enough. Now we’re what? Five-and-a-half months from Micheal now … he’s playing politics.”

But Democrats see something more nefarious playing out. They say Trump is picking on the people of Puerto Rico at the expense of everyone else.

“The White House for some reason is opposed to the people who are in Puerto Rico, and I think it’s racist,” Sen. Patrick Leahy (D-VT), who is the top Democrat on the Senate Appropriations Committee, told reporters this week.

Trump’s reluctance to help the people of Puerto Rico is well-documented.

It all came to a head in 2017, when the island was devastatingly hit by Hurricane Maria — the deadliest natural disaster in US history, which killed nearly 3,000 Puerto Rican residents in the immediate landfall and the devastation that ensued for months afterward. Trump has repeatedly disputed the number of victims and blamed local leaders for the power outages. He’s complimented his handling of the disaster, despite a report from his own administration’s Federal Emergency Management Agency (FEMA) that said it was inadequate.

The hurricane resulted in the world’s second largest blackout; Puerto Rico saw more electricity outages due to Hurricane Maria than in the rest of the US over five years, according to one report from Rhodium Group, an economic data analytics and policy firm.

In the immediate aftermath, Trump repeatedly complained about how expensive it was to help the island, and said the hurricane wasn’t a “real catastrophe.”

“If you look at the — every death is a horror, but if you look at a real catastrophe like Katrina and you look at the tremendous hundreds and hundreds of people that died and what happened here with a storm that was just totally overbearing. No one has ever seen anything like that. What is your death count?” he said during his visit after the hurricane.

Trump has gone on to imply, without evidence, that San Juan Mayor Carmen Yulín Cruz did something illegal with the FEMA supplies sent to the island, and falsely claimed that the electrical infrastructure was broken before the storm hit.

Republicans have defended Trump by saying the president is merely pointing out that the island is in a position of financial turmoil — and should be held accountable.

“Let me tell you what, Puerto Rico doesn’t have a sterling record, and a lot of states don’t either, but Puerto Rico has not a good record on handling a lot of money … and that’s what the president is raising,” Sen. Richard Shelby (R-Al) told reporters of Trump’s comments.

Trump is right to say that Puerto Rico has been struggling for some time. But it’s not all just because of bad local leadership, as Trump likes to say.

As Vox’s Alexia Fernández Campbell has reported, the government was broke in part because of a legacy of federal policies that have crippled the Puerto Rican economy.

The Merchant Marine Act of 1920 (known as the Jones Act), which requires companies to hire US-based shipping crews to transport goods between US ports instead of letting them hire crews who offer the best price, didn’t exempt Puerto Rico, making it expensive for Puerto Ricans to buy food, gas, and basic goods — and for businesses to operate on the island. Then in 2006, Congress removed a tax incentive program to encourage investment in Puerto Rico.

The subsequent recession led the island down a spiral of debt. And this week, Congress missed its deadline to fund food stamps for the territory, forcing the island to cut back aid for more than a million residents who depend on them.

There are some Republicans that recognize this. Scott and Sen. Marco Rubio (R-FL) both support statehood and acknowledge why the island needs more aid than other states undergoing disaster recovery.

Trump, however, has been opposed to giving Puerto Rico statehood, which the people of the island have repeatedly voted in favor of. House Democrat Rep. Darren Soto (D-Fla.), with the support of Puerto Rico Governor Ricardo Rosselló, introduced a statehood bill this week to make Puerto Rico the 51st state.

Trump doesn’t seem interested in helping the island at all anymore. According to Rubio, the president is fine with supplementing the lapsed nutrition aid to the state but doesn’t support rebuilding the island’s old infrastructure.

Trump’s presidency and the divided government has made what is typically a straightforward legislative exercise — to give states disaster relief money — more complicated.

The House bill includes a provision to ensure Trump can’t use money allocated to certain programs to build his southern border wall. And this week Schumer proposed adding an additional amendment to protect the Affordable Care Act from the Trump administration’s push for the federal courts to overturn the law entirely. Of course, the wider the scope of demands, the more complicated it is to actually pass these kinds of bills.

The stakes are always high when it comes to disaster relief. At this point, the need for aid touches every part of the country — blue states and red states. A mid-March “bomb cyclone” has caused nearly $1.5 billion in damage in Nebraska alone. Farmers along the Missouri River in Missouri, Kansas, and Iowa are still trying to see how they can salvage their land. Iowa is estimating around a $214 million loss. California is still recovering from wildfires. And in the South, hurricanes, floods, tornadoes, and late freezes have all taken a toll on the agricultural industry and surrounding businesses.

But even if all of those additional provisions are pushed aside, and this is truly a debate about disaster relief, there is Trump’s feud with Puerto Rico — an added political element that makes Democrats wary of working with the White House.

“Every day President Trump spends pitting disaster victims against each other is a day that Americans in the Carolinas, California, Florida, Georgia, Puerto Rico, and the territories won’t get the assistance they need to recover and rebuild,” Rep. Nita Lowey (D-NY), who chairs the House Appropriations Committee, says.

Correction: an earlier version of this story erroneously said the Senate passed its version of the disaster relief bill. That vote hasn’t happened yet. We deeply regret this error.