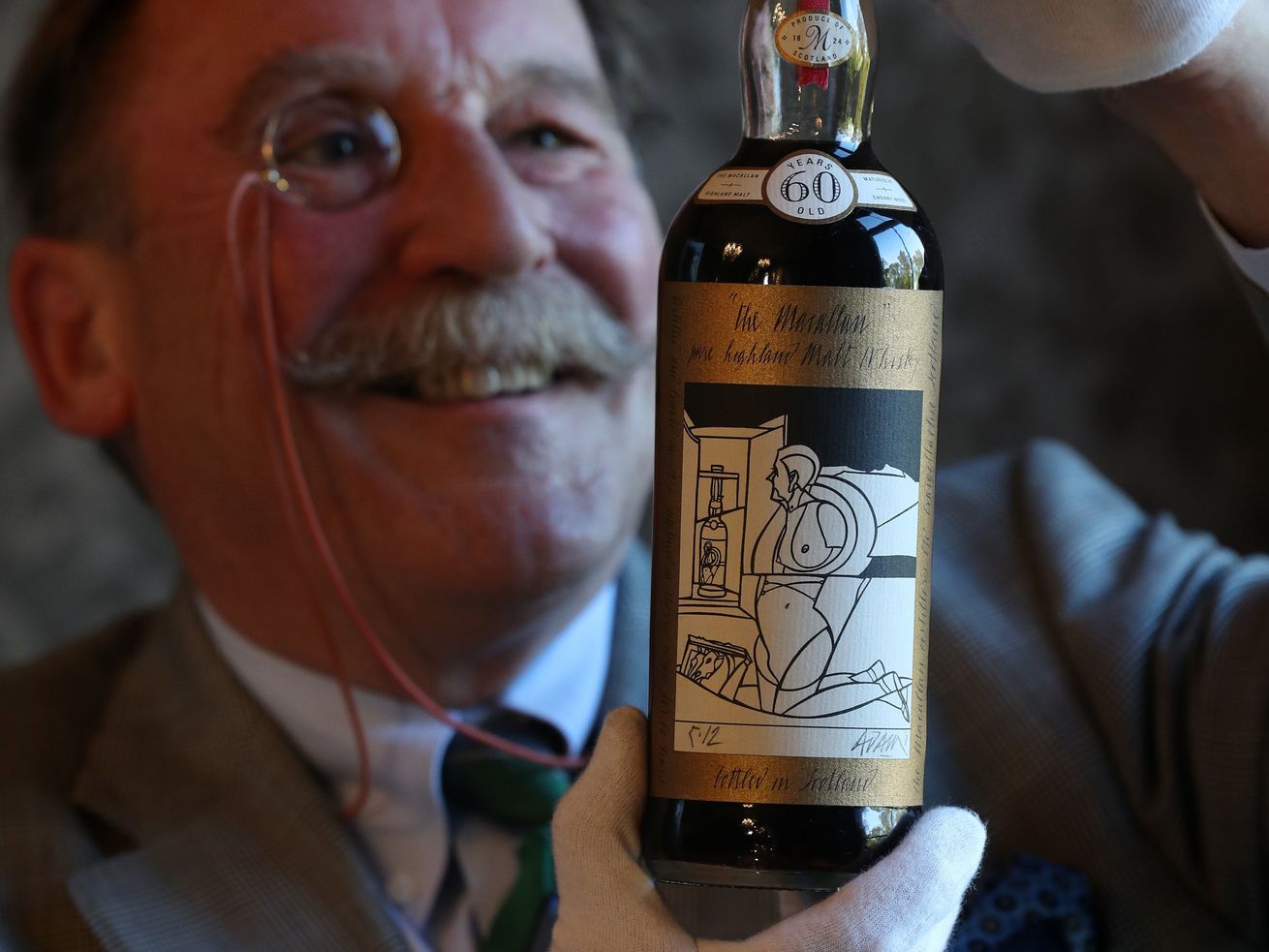 It’s not about the taste.

But no one expects it will hold the record for long, because less than 24 hours after it sold — for the price, the New York Times notes, of a small Scottish castle — Christie’s unveiled a bottle of even rarer single-malt 60-year-old Macallan whisky, which is set for auction in November and will likely go for even more. Assuming everything proceeds as expected, the bottle, Bloomberg reports, could “crack the 1 million pounds mark,” or just over $1.3 million.

“It’s literally the holy grail,” says Sean McGlone, managing director at Whisky Auctioneer, a Perth-based online auction house, of the soon-to-sell Macallan. “It’s the rarest bottle of whisky in the world. I don’t know if the price for this one will ever be beaten.”

That’s great news if you are looking to offload a bottle of Macallan. What is less clear, to a whisky outsider: Why are people buying it? What do you do with a $1 million-plus bottle of whisky? And what does a $40,000 pour actually taste like?

Macallan 1926 ranges from rare to one-of-a-kind

These record-breaking bottles — not just the one that sold last week in Edinburgh, or the one slated for auction at Christie’s in November, but the pair that broke records in Dubai in April (purchased at the Dubai Airport) and another pair that broke records in May (at a Bonham’s auction in Hong Kong), and the bottle that will hit the block at Sotheby’s in New York next week (high estimate: $1.2 million) — all contain the same whisky: the Macallan 1926, which was aged 60 years before being bottled, with what Christie’s calls “appropriate reverence,” in 1986. Only 40 bottles were ever produced.

And it gets rarer thanks to the packaging. Twelve of those bottles had labels by the Italian pop artist Valerio Adami; another 12 had labels by British artist Peter Blake, who is particularly famous for co-creating the album cover art for the Beatles’ Sgt Pepper’s Lonely Hearts Club Band. The bottle that sold last week in Edinburgh was an Adami. The one up next week at Sotheby’s is a Blake.

We don’t actually know where all those bottles are, or if they’re even all intact: According to the New York Times, one of the Adami bottles might have been destroyed in a Japanese earthquake in 2011, and at least one other “may have been opened and drunk,” presumably at a time when it was worth a slightly less astronomical amount.

The bottle set to sell at Christie’s is even rarer than those, though, because the label is hand-painted by the Irish artist Michael Dillon. “It’s literally one-of-a-kind,” McGlone tells me. “It’s the only one.”

The key factors of the price tag: rarity, age, and brand

“It’s all down to rarity,” McGlone says of Macallan’s price. “There’s no shortcut in whisky to make good product.” If, today, you decide you want to make 60-year-old whisky, then you have to let it age for … 60 years. It’s a slow, slow process, and there is nothing you can do to make it faster; as a result, it commands a certain price, which only climbs higher due to the extremely limited supply.

And then there is the Macallan name. “As with everything else, you could probably get a Kmart handbag for pennies, whereas one from Gucci or Versace will cost considerably more,” McGlone says. “Macallan is in a completely different price league from everything else because it is the collectible whisky.”

The Macallan, a distillery in Speyside, Scotland, just outside the village of Craigellachie, has long been considered to produce “one of the best single malts ever.” There are other 60-year-old bottles, from other excellent distilleries, but while “the liquid is considered as good as Macallan in a lot of instances,” McGlone says, “it would never hit the kind of money that Macallan will hit. It doesn’t have the same sort of brand recognition.”

The Macallan 1926 has transcended its original purpose to become something else: a collector’s item, an investment, art. So how much of the value comes from the quality of the actual liquid inside? Hyman says it’s not so easy to quantify.

“Is a Picasso that much better than a Chagall? Why is a Picasso worth $150 million and a Chagall is worth $10 million, or whatever it is,” he asks. “It all comes down to the subjectivity of the people who are buying these things.” On some level, a collectible is worth approximately whatever somebody is willing to pay for it.

That does not mean you have to pay the price of a Scottish castle for a Macallan-brand bottle. You can, at this very moment, buy a bottle of Macallan Double Cask 12 Year Old whisky for $71. You could also, if you happen to have a spare $11,000 lying around, buy a bottle of Macallan Fine & Rare 1990. As the name suggests, it was distilled in 1990, which is, the description points out, the year Nelson Mandela was freed from prison and J.K. Rowling got the idea for Harry Potter on a train. While $11,000 is certainly a lot, it’s not enough to buy historic property.

It is difficult to assess the taste profile of a bottle of the Macallan 1926 because most people haven’t tried it. “I’ve never tasted it,” Joseph Hyman, a fine spirits specialist at the auction house Skinner says, laughing with but also at me. “It’s certainly out of my price range.”

“The liquid is probably good, but it’s not a million pounds better than something else, if you know what I mean,” offers McGlone, who hasn’t tried it either.

David Robertson, who was a master distiller at Macallan from the mid-’90s through the mid-2000s, is among the few who’ve tried it, and in his estimation, McGlone is correct. “When I tasted it, the whisky was quite intense, dry, and tasted of fruit with some hint of warming spice,” he told the New York Times. “But I had to try a lot of whiskies over the years and in my humble opinion, there were a number that were better than this one.”

This does not really matter, though, because it’s unlikely anyone who buys a bottle of Macallan 1926 is planning to actually drink it. “It would be great to think that the whisky could be opened by the buyer,” Robertson told the Times. “That is what it was produced for. But for some people, opening a $1.1 million bottle of whisky is quite a big decision.”

There are people buying very expensive bottles of whisky at auction and drinking them, either to show off or to celebrate high-rolling business deals or because they’re really, really into whisky, and if you want to taste the weird, rare stuff, you’ve got to pay collector prices for it.

But like Roberts says, most likely, no one is buying million-dollar bottles to consume them. “It’s very much like the art market at this point on those higher-end items, because they’re not really opened,” Hyman says. “They’re for enjoying having them.”

Somebody with a display cabinet full of astronomically expensive rare whisky is more or less the same, he tells me, as somebody who’s dedicated the “grand room in their mansion” to displaying their personal art collection.

The difference is that art was meant to be looked at and whisky was meant to be drunk, and whisky that sits in a cabinet never gets to fulfill its purpose. “That’s the double-edged sword,” Hyman tells me philosophically. These whiskies “were produced originally to be drunk. The fact that they became a collectible is a different thing. That’s a newer thing.”

Eventually, he suspects, someone will drink them — someday they will get damaged, the seals will get compromised, there’ll be some evaporation, and the value will fall, he says. “In the meantime, it’s creating a frenzy.”