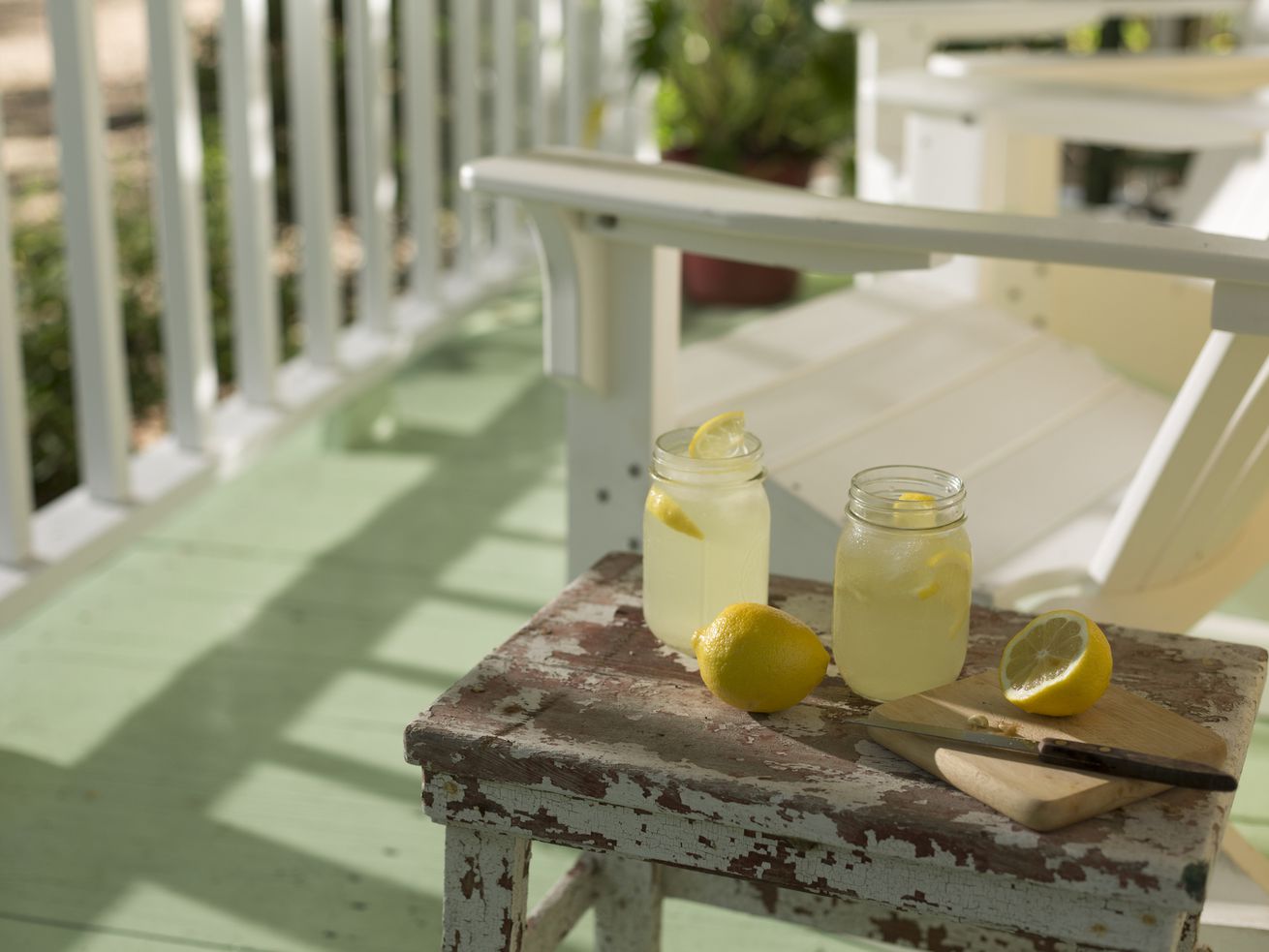 In Reese Witherspoon’s new book, Whiskey in a Teacup, the author sells a lifestyle that isn’t available to everyone.

All my friends are having babies, and the only advice I ever have for them is to make sure they give their children a middle name. “For the monograms!” I say, when they give me strange looks. But they don’t understand: They didn’t grow up in the South.

Monogram culture has haunted me since the spring semester of my senior year in a suburban Atlanta high school, when I, a person with no middle name, received the following graduation gifts from my peers: note cards, notebooks, and even a set of towels with my full first name on them, when everyone else had their initials monogrammed on theirs; a tote bag with my two sad-looking initials on it when everyone else’s were embroidered with intricate three-letter designs; and, while my classmates all received tumblers emblazoned with their monograms, mine — to add insult to injury — was blank.

And that’s just what I can remember. I learned a lot that last semester of high school, not just monograms but also about things like Greek life, which had a strange, cultish allure to it, with all of its “football dresses” and candlelight ceremonies and lifelong commitment — even our senior year AP Economics teacher talked up her sorority and offered to write letters of rec to girls who wanted to join it.

It seemed as though there was a code of conduct that women subscribed to in the South, one that so many people had already been initiated into. But I was Southern, too, wasn’t I? Why had I never heard of it?

There is a vision of the South, a mythology, that has been fashioned through years of luncheons and dinner parties and cotillion classes into a character itself: The Southern Lifestyle, present everywhere from weddings to dive bars (Mason jars are a throughline), carefully crafted over the decades and passed down through generations.

In the Southern Lifestyle, people wear pearls to football games and pearls to church. Because in this fantasy, everyone is Christian, everyone watches football, and everyone is white. But I was raised Hindu by Indian immigrants in Georgia, where I was born and lived for more than two decades. The Southern values I was brought up on, like kindness and standing up for what you believe in, are available to people of all identities, but they alone aren’t enough to merit admission to the exclusive club that is Southern femininity.

Enterprising Southern women have been trading on this platonic ideal of a lifestyle forever. The latest is Reese Witherspoon, whose book Whiskey in a Teacup published last month. The book’s tagline, ‘What growing up in the South taught me about love, life, and making biscuits,’ is accurate enough: Witherspoon’s book doles out family anecdotes, traditions, recipes, and advice for how to live a truly sugar-sweet Southern life.

But the life she details is a rich, white life that only a few Southerners actually live, the ones who, like Witherspoon, are privileged enough to have oil paintings of ancestors up on the walls, wrap-around porches, pearls for every young lady’s 16th birthday, and a Cadillac in every driveway on the street, well-suited for drive-in movies and road trips and — she writes — even sleeping in the back seat for a lark.

Witherspoon does mention, as an aside, the “powerful black women” her mother worked alongside; she talks about the civil rights movement and mentions the activism that happened in African-American hair salons. She also hints in the epilogue at today’s changing culture of Nashville.

But the book is by and large focused on this rich, white, aspirational lifestyle. She makes it look charming, fun, and easy. Wow, I can’t wait to make cute Easter baskets for my children, I thought, despite not having children and never having celebrated Easter, as I read the chapter on holidays.

“Did you know Reese Witherspoon recommends serving the main meal an hour after the party is supposed to start?” I texted my dad, since this is an ongoing conversation surrounding our annual Mother’s Day and Thanksgiving celebrations. And I appreciated that so many of her recipes called for frozen puff pastry or Cool Whip, instead of from-scratch everything.

Still, only a woman who looks like Witherspoon could get away with driving to a party in hot rollers — “the higher the hair, the closer to God,” Witherspoon writes, adding that these days going for volume over height is perfectly acceptable — without getting some side-eye on the way, and not many more would feel comfortable going up to strangers’ houses to sing Christmas carols in our current climate.

The book isn’t bad. In fact, it’s good. It’s sweet, and it’s obvious that Witherspoon wants everyone to like it, and to like her. And I will cook from it, almost certainly, and source gift ideas — monogrammed or otherwise — from its pages.

But it’s hard to have spent roughly 87 percent of your life in the South only to then read a book that dictates, “One thing every Southern woman knows how to do: hot-roller her hair,” or “How do you make it to adulthood without every picking up at least one verse of ‘Joy to the World’? Were you raised in a bunker?” as though the experience Witherspoon had was the norm for Southern women, that it was the norm for you and you were falling short.

It’s not so much a criticism of the book or of Witherspoon, who herself has done a lot to further a diverse, inclusive, feminist Hollywood. But perpetuating the idea of Southernness as a monolith hurts all of us; it erases the identities of all of the people who have made the South what it is.

At its worst, it avoids the darkest history of the South, glossing over the South that supported slavery, that opposed the Civil Rights movement, that worked hard to make it near impossible for people who didn’t fit into that single Southern identity — the white one — to succeed, or even exist as equals.

Today, even in the global, diversifying South, many Southerners are made to feel like they don’t belong because of their race, or religion, or when or how they came to this country.

Perpetuating the idea of Southernness as a monolith hurts all of us; it erases the identities of all of the people who have made the South what it is

But even in its most harmless form, a celebration of the biscuits and Cool Whip desserts and sun tea sweating on a porch, it assumes by definition that this is the South everyone who grew up in the region experienced — and, more to the point, that this is the South that everyone else should know about. So if you live differently, are you living wrong?

It can feel like it. For me, this manifested in being asked “What church do you go to?” instead of asking if I went to church in the first place — uncomfortable but mostly benign, until the follow up is a kind reminder that I’ll be going to hell or that the devil’s got my soul.

Or telling a server or a friend’s mom that I’m vegetarian and being served a plate made up of veggie sides studded with ham hocks or lard or bacon, like those little bits of meat “for flavor” don’t count. Small slights, easy enough to live with, but recurring reminders that people like me will never belong in this idealized version of the only place we’ve ever called home.

Even armed with lifestyle manuals like Witherspoon’s book, or the hundreds of Junior League cookbooks and etiquette guides that came before it, most of the South will never be able to give strands of pearls out for birthdays or graduations, or have the kind of hair hot-rollers will work for.

I‘m past my longing for those curlicued monogram necklaces but I still feel a pang of wistfulness sometimes when I see a cute monogrammed makeup bag or tote, or even when my colleagues sign their emails with a neat, compact MWO or MJF, tidier and more professional than my curvy “SC.”

It’s a hang-up, I know, a silly thing I should be over. But it’s hard to shake the grip of that commodified version of the South, laden with heirloom quilts and dripping with barbecue sauce, when everyone — even Reese Witherspoon — is telling you that that’s the way to live.