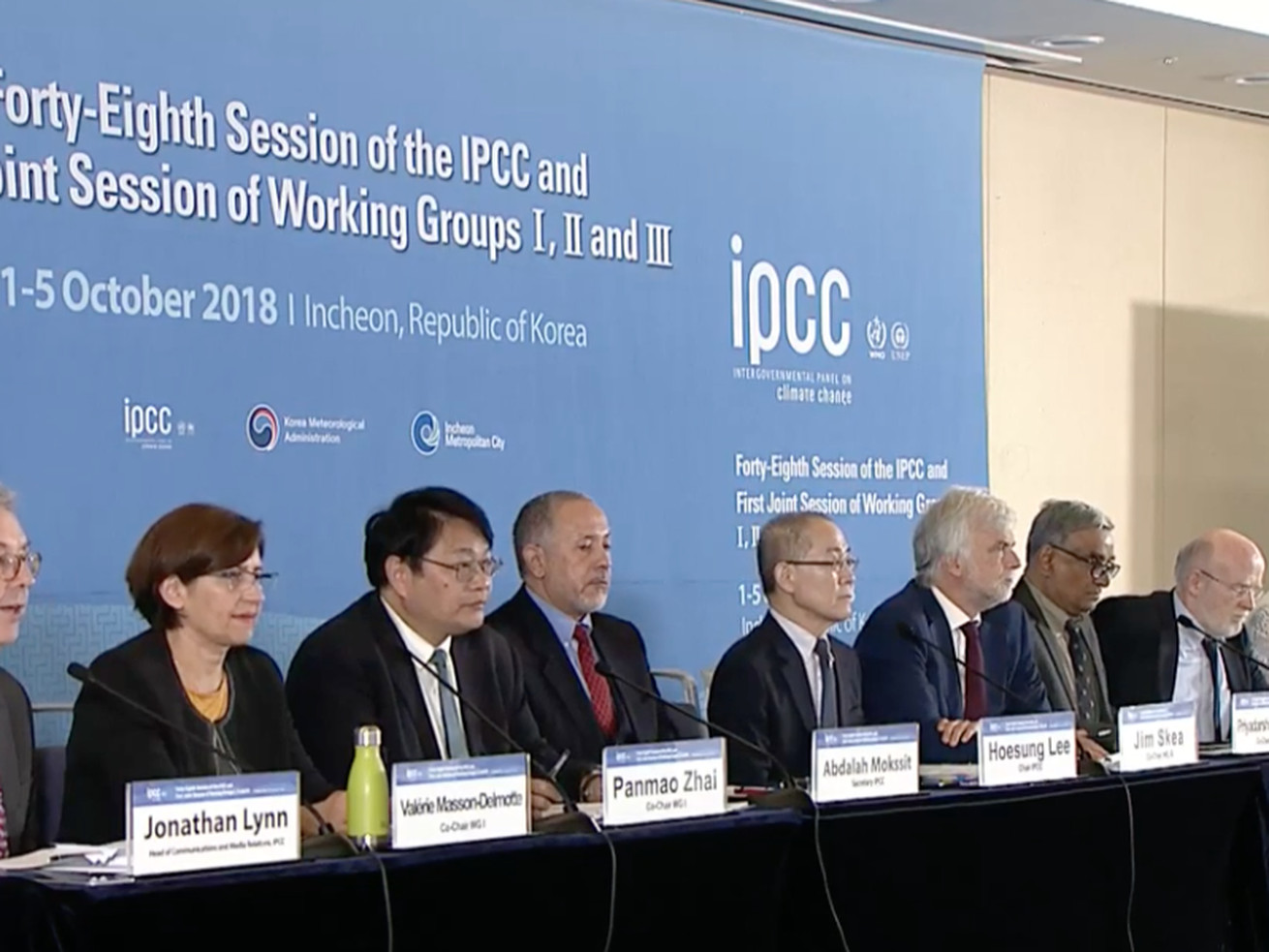 1.5 degrees Celsius of warming will be much worse than the 1 degree Celsius we’re experiencing now.

The new report from the Intergovernmental Panel on Climate Change on limiting global warming to 1.5 degrees Celsius, or 2.7 degrees Fahrenheit, is out. Its prognosis for the planet is grim: We may have as little as 12 years to act on climate change — to slash global emissions 45 percent — to reach this target.

The report was commissioned by the United Nations to see what would happen if global average temperatures rose by 1.5°C above preindustrial levels, and what it would take to cap warming at that level. Under the Paris climate agreement, nations agreed in 2015 that they would take actions to limit global warming to 2°C while striving for the even tougher target of 1.5°C.

The new report is meant to build on that agreement, and it is exhaustive, with 132 authors, drawing on more than 6,000 peer-reviewed research articles. The overarching conclusion is that every fraction of a degree of warming matters. Letting temperatures rise will exact a huge toll on lives, natural systems, and the economy. Fighting to keep warming in check — which will include radically and rapidly reducing coal and oil consumption, among other things — will save lives, the food supply, and homes.

Incredibly alarming. Denying global warming is a threat to public health, our future, and our planet. https://t.co/DNtuyuMTTA

The findings are dense and dispiriting, so I don’t blame you if you don’t want to pore over the 700-plus pages of the actual report or the 34-page summary for policymakers.

But climate change is something that impacts the whole planet. We and future generations are all in this together. So here are four key takeaways from the latest reminder by the world’s top climate scientists that we need to get much more ambitious about the challenge before us.

We’ve been burning fossil fuels like coal, oil, and natural gas since the dawn of the Industrial Revolution, and we’re not slowing down. When burned, these fuels emit carbon dioxide, which traps heat in the atmosphere.

Now the world has heated up by 1°C on average compared to preindustrial times. We’re already seeing its effects in the forms of the fastest decline in Arctic sea ice in 1,500 years, more than 8 inches of sea level rise since 1880, and more damaging extreme weather due to climate change. Global temperatures are still trending upward, but countries want to limit that warming to 2°C by 2100 under the Paris agreement. Ideally, they don’t want to make it past 1.5°C.

It turns out there are enormous differences for the planet in that 0.5°C between the two scenarios: Marine fisheries would face double the declines with 2°C of warming compared to 1.5°C. Maize harvests would decrease by more than double. Insects, including vital pollinators, would see their ranges decline threefold. Sea levels would rise by another 2 inches, putting an extra 10 million people at risk of coastal flooding and related problems. The number of people exposed to extreme heat at least once every five years doubles under a 2°C scenario relative to a 1.5°C scenario. (The World Resources Institute has a great infographic comparing the two scenarios.)

In other words, things will get bad as the climate warms, but if it gets hotter, those effects will get worse. “Climate-related risks to health, livelihoods, food security, water supply, human security, and economic growth are projected to increase with global warming of 1.5°C and increase further with 2°C,” according to the report.

So it’s not a trivial difference.

We need every trick in the book to fight climate change, and we need to get much better at removing carbon from the atmosphere

The report goes into quite a bit of detail laying out pathways to limiting warming to 1.5°C. In short, these paths require drastic cuts in greenhouse gas emissions at an extraordinarily fast pace.

As my Vox colleague David Roberts pointed out on Twitter:

Basically, stopping warming at 1.5C would involve an immediate, coordinated crash program of re-industrialization, involving every major country in the world. It would be like the US mobilizing for WWII, only across the globe, sustained for the rest of the century.

Yet we have the tools to do it: namely, conventional methods like energy efficiency measures, replacing fossil fuel-fired generators with renewables, electrification, renewable fuels, switching to electric vehicles, and so on.

However, some of the paths anticipate an “overshoot.” The means the world’s greenhouse gas emissions would exceed the amount needed to warm the planet by 1.5°C, so some method is needed to pull carbon dioxide out of the air.

Carbon dioxide removal (CDR) encompasses a suite of different tactics. This includes planting more forests, which take in and store carbon dioxide as they grow. Bioenergy coupled to carbon capture and sequestration (BECCS) is another option. So is direct air capture of carbon dioxide.

Though a handful of companies are working on these latter technologies, they are still in their early stages. There are only a handful of direct air capture plants, and we’ll need vastly more of them since upward of 1,000 gigatons of carbon dioxide will have to be removed from the atmosphere by 2100, according to the IPCC. Currently, we emit about 53 gigatons of greenhouse gases each year, according to the World Bank, so in the extreme case, the world would need to deploy enough CDR to offset more than 18 years of total global carbon emissions.

But even if we don’t overshoot our carbon budget, we will still need CDR to compensate for other sectors of the economy that are harder to decarbonize, like air travel or agriculture. The IPCC puts it thusly:

All analysed 1.5°C-consistent pathways use CDR to some extent to neutralize emissions from sources for which no mitigation measures have been identified and, in most cases, also to achieve net-negative emissions that allow temperature to return to 1.5°C following an overshoot (high confidence). The longer the delay in reducing CO2 emissions towards zero, the larger the likelihood of exceeding 1.5°C, and the heavier the implied reliance on net-negative emissions after mid-century to return warming to 1.5°C

And CDR is not a get-out-of-climate-change-free card: Limiting warming to 1.5°C still demands the rapid scale-up of technologies the world has never deployed at any appreciable scale. We’re in uncharted territory, and the longer we wait, the more we’ll need them.

Policies and economics weren’t addressed in the IPCC report, but they’re impossible to ignore

The costs of limiting climate change and the kinds of policies it demands are conspicuously absent in the IPCC report. It’s a huge part of the equation of fighting global warming, but at the press conference on Monday announcing the release of the report, authors were insistent that they were only mandated to look at the science of limiting global warming to 1.5°C.

“One thing the report did not aspire to do is answer the question of feasibility,” said Jim Skea, co-chair of IPCC Working Group III, at the press conference. “We said it was possible within the laws of physics and chemistry.”

The researchers did estimate the global economic damages from warming — $54 trillion if the world warms by 1.5°C by 2100, $69 trillion if temperatures reach 2°C. But convincing governments to pursue the 1.5°C target and finding the way to pay for it is the only way we can achieve what’s outlined in the report, a fact the researchers grudgingly acknowledged.

“Carbon pricing and the right economic signals are going to be part of the mix,” Skea said.

Right now, it’s tremendously expensive to deploy all the technologies and policies to fight climate change. However, the costs to society of allowing the planet to continue to warm are even more immense in the long term.

And it stands to reason that fighting climate change could in fact boost the global economy. A recent report found that a global shift toward sustainability would yield a staggering $26 trillion in economic benefits by 2030. The question is how to convince countries to spend billions now to save trillions in the future.

It’s wild that climate change is completely solvable, except that everyone in a position to solve it is an asshole

We also need to resolve the fundamental injustice of climate change: The people who contributed the least to the problem and benefited the least from its sources stand to suffer the most.

Making a compelling financial case to fight climate change and to help the most afflicted demands a rigorous accounting of its effects. The includes calculating the social cost of carbon, how much a unit of carbon dioxide emissions hampers a given country’s economy.

Yet there aren’t many economic penalties for spewing greenhouse gases. Some countries have carbon prices, but few have priced emissions high enough to drive a major change in their carbon footprints. And there are only a handful of tools to help poorer countries pay for the damages of climate change, like the United Nations’ Green Climate Fund.

One solution is to price carbon, whether through a tax or another mechanism like cap and trade. That would help drive up the cost of dirtier energy sources and make technologies that emit less more competitive. The revenue these mechanisms generate can then help those afflicted by rising seas or extreme weather gain recourse.

Such a scenario also requires more investment in research and development to help bring down the costs of cleaner alternatives, which further drives the economic case to fight climate change. If you make it affordable, you make it feasible. And if you make it profitable, you make it sustainable.

It’s also fitting that the launch of the IPCC report coincided with the 2018 Nobel Memorial Prize in Economic Sciences going to a climate change economist, William Nordhaus, who shared the prize with economist Paul Romer.

The responsibility, then, for translating the findings of this report into action falls to everyone who reads it. Hans-Otto Pörtner, co-chair of IPCC Working Group II, said at the press conference that the report “comes with some wishful thinking that the messages that this report conveys are being taken up by the public, by the policymakers, by the governments, and that the urgency of the issue is being seen, because climate change is shaping the future of our civilization.”

The IPCC will present its findings to the United Nations Framework Convention on Climate Change meeting in Poland later this year. That meeting may lead the UN to issue new policies or recommendations for fighting climate change.

We can still fight climate change, but we’re locked into a difficult scenario

There is a small respite in the IPCC report: Researchers found that the greenhouse gas budget to limit warming to 1.5°C may be a bit larger than previously thought by about 300 gigatons. That buys the world some wiggle room, but not much: about six years’ worth of global emissions.

Our current emissions trajectory puts us on a course to reach 3°C of warming by the end of the century, even if every country meets its goals under the Paris agreement. Global greenhouse gas emissions are set to rise this year. Yet the harms outlined in the new IPCC report show that even the Paris target of 2°C may still be too dangerous.

It’s possible to do this, even with technology as it stands now, but it would require a level of coordinated effort the world has never seen before. It’s also a level of effort no country seems to be willing to endure.

All this adds up to a situation with no easy way out. There is no room left for wishful thinking that a perfect solution will emerge without trade-offs, that we’ll dodge any grievous consequences of warming, and that we won’t have to pay for this, either today or decades down the line with interest.

Everything we do to mitigate warming will have some benefit, and it’s worth fighting to control every fraction of a degree, but even the best-case scenario involves drastic changes to the world as we know it. And we’re rapidly closing the window to achieve it.