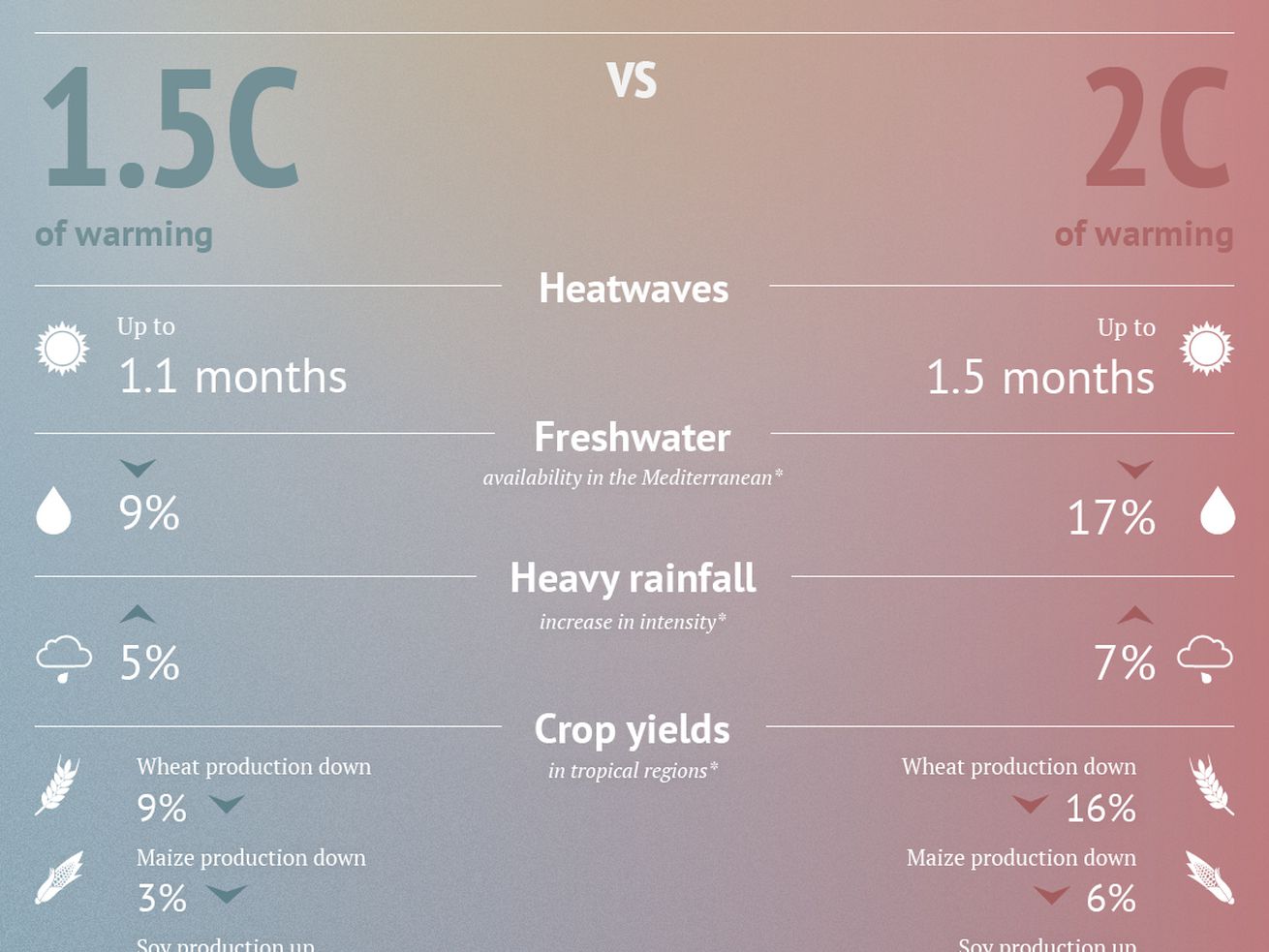 Your terrifying climate graphic of the day.

Editor’s note: This piece was originally published in early 2018 and has been republished for the release on Sunday of the IPCC’s Special Report on Global Warming of 1.5°C.

Signatories to the Paris climate agreement — every country in the world, unless and until the US drops out in 2020 — agreed to what is by now a familiar goal: “holding the increase in the global average temperature to well below 2°C above pre-industrial levels and pursuing efforts to limit the temperature increase to 1.5°C.”

How important is that difference, though? How much worse would 2 degrees be than 1.5? Is it worth the extra effort — and it would be a truly heroic effort — to limit temperature rise to that lower target?

It’s been difficult to answer those questions, in part because they are value-laden and incredibly complex, but also due to a paucity of research. While there’s been a great deal of work done on the difference between, say, 2 and 4 degrees warming (which would be catastrophic), there’s been less modeling around 1.5 and no comprehensive comparison of 1.5 and 2.

Happily, a 2016 study in the journal Earth System Dynamics tackles this directly. Over at CarbonBrief, Roz Pidcock has a great rundown on the study that gets into the background and some of the implications.

Best of all, the team at CarbonBrief (which you should really bookmark) has compiled the relevant comparisons in the study into a single clear, aesthetically pleasing graphic:

2 degrees will be much worse than 1.5 in some places

In terms of heat extremes, the authors write, “the additional 0.5°C increase in global-mean temperature marks the difference between events at the upper limit of present-day natural variability and a new climate regime, particularly in tropical regions.”

Around the Mediterranean, freshwater availability will drop by almost twice as much at 2 degrees as at 1.5 — 17 percent versus 9 percent.

Some high-latitude regions may benefit from the difference between 1.5 and 2 degrees (though such benefits will be wiped out if temperature subsequently continues rising). But even getting up to 2 degrees, “tropical regions like West Africa, South-East Asia, as well as Central and northern South America are projected to face substantial local yield reductions, particularly for wheat and maize.”

As for sea level rise, relative to 1.5 degrees, 2 degrees would mean 10 centimeter higher levels and a 30 percent higher rate of increase by 2100.

We will have more information on this comparison when the IPCC completes its special report on the impacts of 1.5 degrees later this year. But the new Earth System Dynamics study already confirms what many scientists have been warning for years: 2 degrees is not a “safe” threshold. Negative impacts are already underway and will only get worse.

We don’t have very long to make up our minds. The window for hitting 1.5 degrees is rapidly closing. Here’s another terrifying graphic from CarbonBrief, showing how many years remain before the “carbon budget” for various temperatures is used up:

At our present rate of emissions, our carbon budget for a good (66 percent) chance of limiting warming to 1.5 degrees will be used up in six years. Except, oops, that graphic is two years old, so now it’s down to four years.

To hit the brakes at 1.5 degrees, global carbon emissions would need to immediately begin plunging, faster than they ever have, and hit zero by 2050 (and then go negative):

That would require the equivalent of the US mobilization for World War II, only global, and sustained for the rest of the century. The chances of that happening seem … remote. For all we know, Trump will still be in office when the 1.5 degree budget is used up.

But we should be clear about the decision we are making, even if we’re only making it by not making a decision.

By delaying the necessary work of decarbonization, we are consigning millions of people in tropical regions to less food and in the Mediterranean to less water — with all the attendant health problems and conflict. We’re allowing more heat waves and higher seas. We’re giving up on the world’s coral reefs, and with them the hundreds of species that rely on them.

And even then, the decision: 3 degrees or 4?

The longer we wait, the more human suffering and irreversible damage to ecosystems we inscribe into our collective future. But there’s no hiding, no escaping the imperative to decarbonize. It must be done if our species is to have a long-term home on Earth.

Seems like the smart thing would be to get on with it.