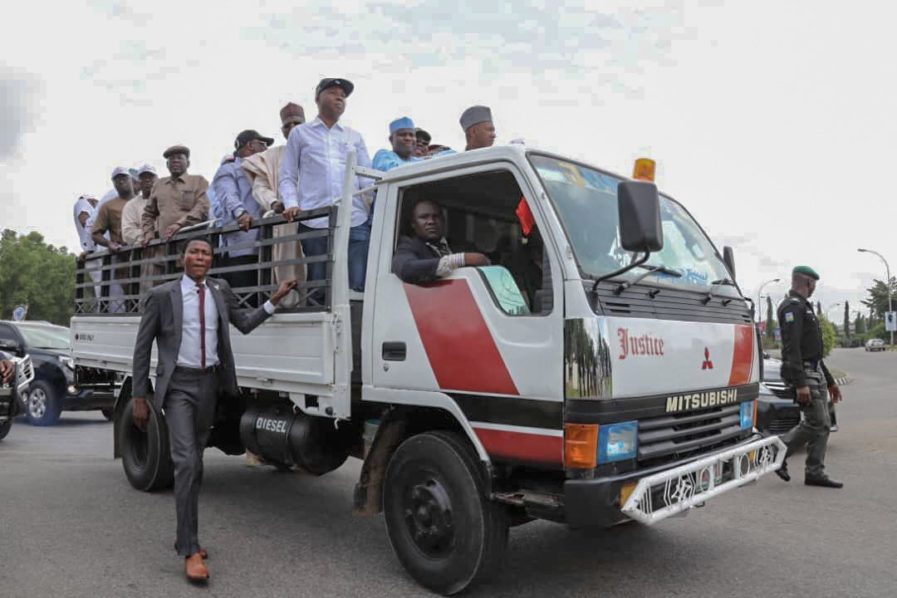 Nigeria’s Senate President Bukola Saraki, Speaker of the House of Representatives Yakubu Dogara, and the national chairman of People’s Democratic Party, Uche Secondus, Friday, led a protest to the headquarter of the Independent National Electoral Commission (INEC) in Abuja.

The Osun State governorship election at the first attempt was declared inconclusive after the margin between the two leading contenders in the poll was lower the number of invalid votes.

The candidate of the opposition party Ademola Adeleke got a total of 254, 698 votes while Isiaka Oyetola of the All Progressives Congress poll 254, 345 votes to come in second after the votes from all the local councils in the state were tallied.

A rerun was held in seven polling units in the state and APC candidate, Gboyega Oyetola, was declared the winner by INEC against the party’s candidate Adeleke.

At the outcome of the supplementary election, the PDP called for its cancellation and the declaration of its candidate Adeleke as the winner.

It also alleged that security agents prevented its members from accessing polling units to cast their votes.

“The right of the citizens to come out and vote has been trampled upon. The entire state, wards and units have been seized by security agencies acting on behalf of the All Progressives Congress (APC) to make sure the election is rigged by all means,” Secondus said.

“We want to remind our security chiefs that they swore to defend Nigeria and defend and protect our parties. Nigeria is a multi-party state, a multi-party nation but what we have witnessed in Osun shows clearly that APC is not ready for election and we are afraid that Buhari will not hand over if he loses the election next year.”

The protesters are therefore demanding that INEC declare PDP candidate Adeleke as the winner of the election claiming that the Nigeria Police and INEC are arms of the ruling party.