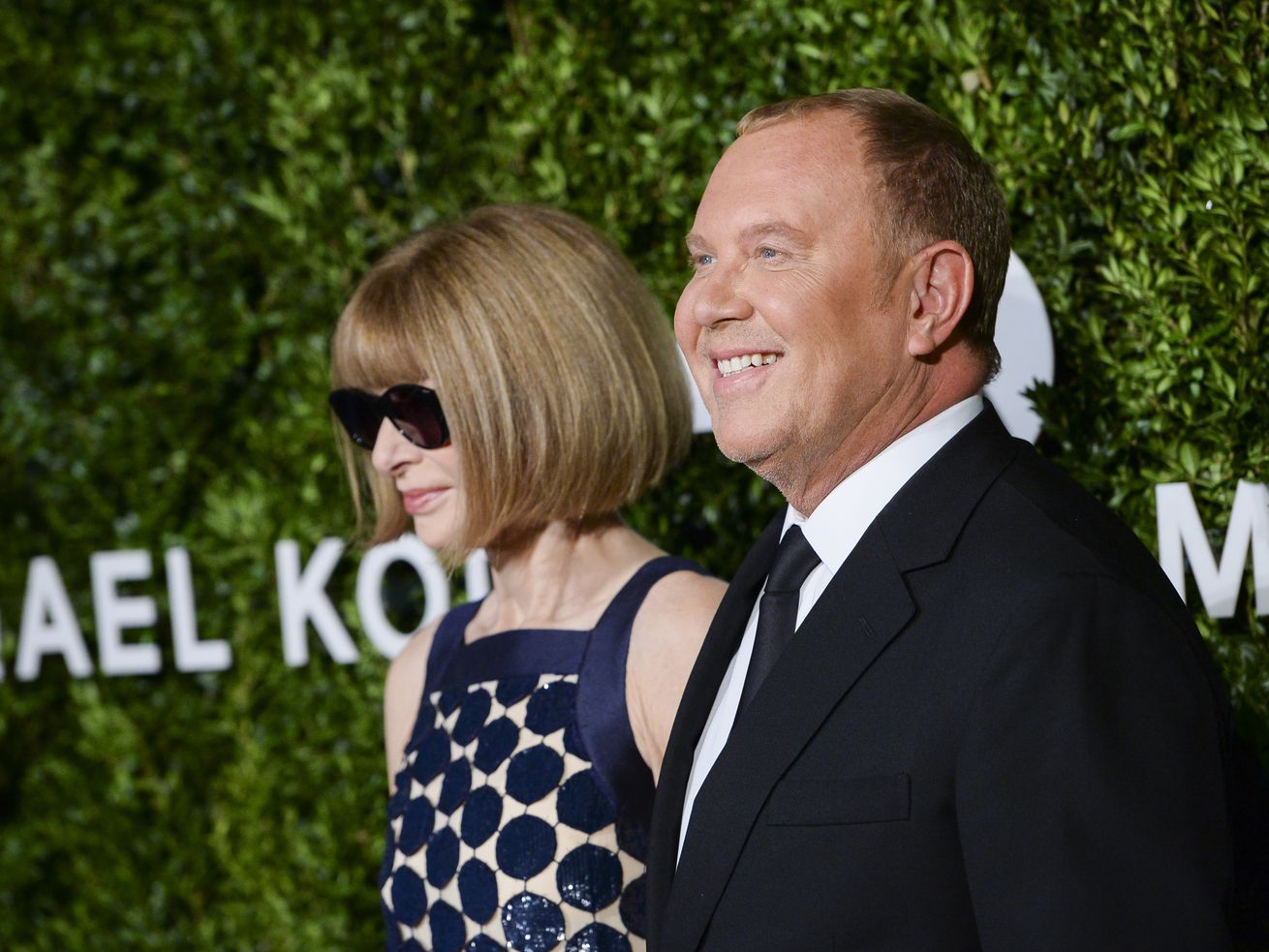 Two French conglomerates control much of the fashion industry. America is trying to catch up.

On Monday morning, Bloomberg and Reuters reported that the clothing brand Michael Kors was “nearing an agreement” to acquire the famed Italian fashion house Versace for $2 billion. Early on Tuesday, the brands confirmed the deal: For $2.12 billion, Versace will become part of the Kors family.

For Versace’s fans, the announcement has caused some distress and consternation because the brand’s image is radically different from Michael Kors’s. But the fashion world is dominated by conglomerates, and in that sense, their decision to join up isn’t surprising at all.

While Michael Kors is associated with all-American style and mass appeal, Versace is inextricably tied to Italian design and luxurious high-fashion flair. Ultra-sexy and synonymous with powerful, over-the-top glamour, Versace is known for the palm-print dress that Jennifer Lopez wore to the 2000 Grammys, which remains the last word in low-cut necklines, and a slinky black number held together with gold safety pins worn by Elizabeth Hurley in 1994. Until now a family-owned business (Blackstone purchased a 20 percent stake in 2014), Versace is designed by Donatella Versace, the younger sister of founder Gianni Versace.

While Michael Kors’s advertisements also sell the promise of a high-flying life — its sun-kissed models are often photographed beside helicopters, private planes, and boats floating on glittering seas — the brand is fundamentally in the business of attainability. The designer, a judge on Project Runway for the show’s first 10 seasons, traffics in work-appropriate sheath dresses, rose-gold watches, and MK-emblazoned handbags.

Michael Kors went public on the New York Stock Exchange in 2011, and the New York Times reported at the time that “most of the company’s growth” was coming from its lower-priced diffusion line, which gave shoppers a taste of the brand at a fraction of the cost. That growth strategy came at a price, however. Five years later, overexposure and excessive discounting were hurting Michael Kors’s image, a problem that persists today.

I highlight these differences because it’s very easy to look at fashion brands as monoliths, each one a temple to a particular style and a particular kind of shopper, and built in the image of a specific designer. But that misses the full story, which is that a small handful of conglomerates have for a long time operated a vast portion of the fashion landscape.

Michael Kors’s purchase of Versace points to a moment of further consolidation in the market. It also indicates the ways in which American fashion is still desperately seeking to catch up with the fashion industry in Europe, and particularly in France. With roots as the epicenter of luxury goods dating back centuries, Paris and its historic fashion houses (Chanel, Dior, Vuitton) remain the heartbeat of the business.

Michael Kors also said that when the Versace acquisition closes, it will officially change its name from Michael Kors Holdings Limited to Capri Holdings Limited. With that rebranding, it seems clear that the company is fully committed to its transition into a conglomerate.

The French incumbents began snapping up fashion houses in the 1990s

If you want to talk about who runs the fashion industry, you have to start with the two major European conglomerates: LVMH, owned by the Arnault family, and Kering, controlled by the Pinault family.

Headquartered in Paris, LVMH was created in 1987 when the fashion house Louis Vuitton merged with Moët Hennessy, the champagne and cognac producer. One year later, it acquired Givenchy (maker of Audrey Hepburn’s black Breakfast at Tiffany’s dress and Meghan Markle’s wedding gown). During the 1990s through the 2010s, it went on to purchase brands including Berluti, Kenzo, Céline, Loewe, Marc Jacobs, Fendi, and Christian Dior. LVMH’s beauty portfolio includes Sephora, Kat Von D Beauty, Benefit Cosmetics, and the ultra-popular Fenty Beauty by Rihanna.

The French conglomerate Kering, formerly known as Pinault-Printemps-Redoute and (later) PPR, was founded in 1963 as a timber business. During the early 1990s, it acquired a department store chain and an apparel brand, but it wasn’t until the late ’90s that it truly got into the luxury fashion business, taking stakes in Gucci and Yves Saint Laurent. Today it owns those, plus heavy hitters like Alexander McQueen, Balenciaga, and Brioni.

If you look at the Paris Fashion Week calendar or take a walk down Fifth Avenue in New York, you’ll see LVMH and Kering everywhere. During 2017, they reported revenue of €42.6 billion (more than $50 billion) and €15.48 billion (more than $18 billion), respectively. (It should be noted that neither is purely in the fashion business: LVMH, for example, also makes spirits, watches, and jewelry.)

Not all designer brands are owned by conglomerates — Chanel is a notable example — but it’s no surprise that this model sprang up in the fashion world. As Business of Fashion wrote in July, corporations with an all-star portfolio of brands can get better deals on real estate and ad pages. In the current climate, designers stand to gain a lot by joining up with an entity like LVMH or Kering.

And fickle as fashion is, brands can experience all-time highs before falling out of favor with shoppers — only to undergo a soaring renaissance under a new creative director, as has been the case for Kering’s Gucci. While it’s almost inevitable that fashion lines will stumble at some point, existing within a wide portfolio gives them the space to get back on their feet without going under entirely.

The question of the American conglomerate

Can the United States produce a company to compete with LVMH and Kering? That question has come up again and again since the early 2000s, writes the New York Times fashion critic Vanessa Friedman. The debate began afresh last year, when Coach purchased Kate Spade for $2.4 billion, two years after buying the shoe brand Stuart Weitzman, and then changed its name from Coach Inc. to Tapestry Inc.

Tapestry executives have not been shy about their intentions. The new, brand-neutral name, they said, is intended to “grow with our portfolio and with our current brands as they extend into new categories and markets.”

Following its purchase of the shoe brand Jimmy Choo in 2017, Michael Kors’s acquisition of Versace (and its accompanying name change) only amplifies the sense that American fashion companies are attempting to get on the level of their European counterparts.

“The acquisition of Versace will allow the brand to properly compete with Kering’s powerbrand Gucci, whose sales have been propelling Kering forward since the arrival of Alessandro Michele in 2015,” wrote Euromonitor analyst Florence Allday in an email to reporters. “Donatella Versace’s anniversary collection in 2017 to commemorate the death of her brother Gianni raised the profile of the Italian brand again, but without the financial force of a conglomerate behind it, it would be difficult for Versace to reach the same scope as its main Italian rival.”

Indeed, Michael Kors says it has plans to grow Versace to $2 billion in annual revenue and add 100 new stores worldwide. Via Versace, the company is also hoping to gain a firmer toehold in Europe and Asia. This is one way an acquisition can change the way shoppers interact with a brand: With new resources behind a label, consumers in certain regions may suddenly start seeing a lot more of it.

The trick will be for Michael Kors to guide Versace’s growth without trampling its distinctive creative vision. It’s the rare brand that seems like a true family affair: In 2017, Donatella Versace earned rave reviews for a vibrant, fierce collection that paid homage to the work of her brother Gianni on the 20th anniversary of his murder.

With social media causing trends to take over with unprecedented speed, and with brands constantly swapping creative directors, much of fashion has started to look the same recently. If Coach and Michael Kors continue their expansion plans apace, it looks like it’s going to be growing denser, too.