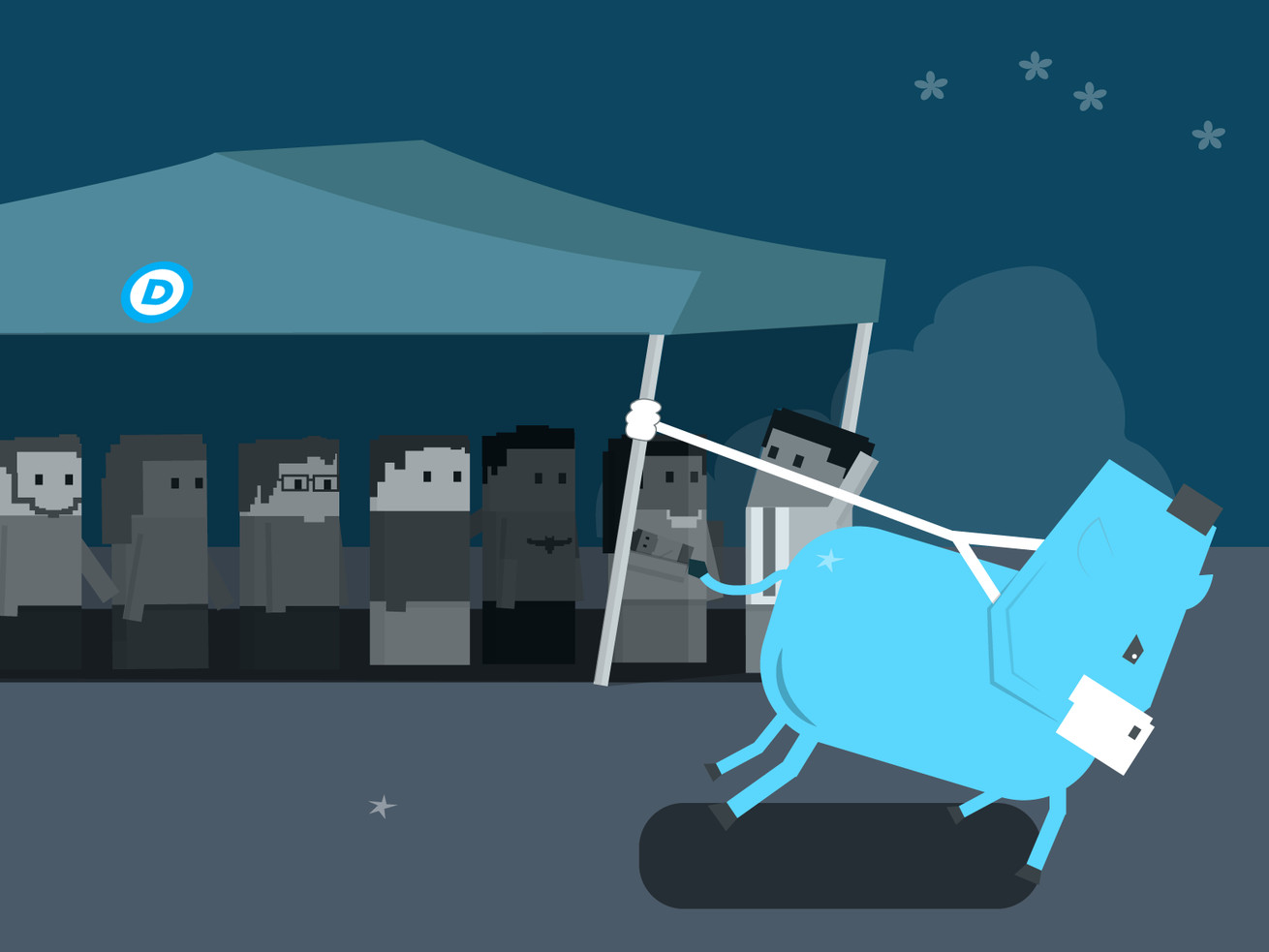 A new study argues that Democrats don’t have to choose between voters of color and the white working class.

Ever since the 2016 election, Democrats have been having the same debate: Should their messaging be centered on race or class?

These themes appear in virtually every Democratic campaign speech, and for good reason: Somewhere in the murky overlap between race and class is a winning formula for the 2018 midterms, and perhaps even the 2020 presidential election.

But is there really such a divide between a race-based message and a class-focused one? A new study from a moderate Democratic think tank suggests that the choice, as it’s being framed by Democratic hopefuls, may be a false one — that an economic appeal may in fact be the most effective way to get nonwhite voters to the polls, in addition to the broader Democratic electorate.

It’s a view that goes against the drift of current Democratic debates. At this year’s Netroots Nation conference, New York congressional candidate Alexandria Ocasio-Cortez, a rising star on the left, said the swing voter Democrats need to win isn’t “red to blue. It’s nonvoter to voter.” In other words, Democrats can win by turning out reliable Democratic voters — black and Hispanic people — who turned out at lower rates in 2016.

But in saying the key to victory isn’t “red to blue,” Ocasio-Cortez is also refuting the recurring idea that Democrats haven’t paid enough attention to white working-class voters (or “populist” voters, as one comprehensive study of the electorate put it) who voted for Barack Obama in 2012, only to switch to Donald Trump in 2016.

The midterm elections are seven weeks away, and there’s about an 80 percent chance Democrats will take back the House with both establishment and progressive candidates coalescing around a more left-leaning message.

But if they fail to take back the House, this debate over what course Democrats should take — win back the white working class or focus on turning out voters of color — is sure to flare up anew. And it could shape the type of candidate Democrats nominate in 2020.

That’s why a new county-level data analysis from Third Way, the preeminent moderate Democratic think tank, is so intriguing. The organization’s data analysis, which it shared with Vox, tries to untangle some of the big factors in the 2016 election, especially the role played by nonwhite and white working-class voters.

The data shows that there are many reasons progressive Democrats like Ocasio-Cortez are right: Democrats can close some of the margin with Republicans by turning out more people of color, especially those who are facing economic adversity. But how do you tweak the dials to optimize support for your candidacy in a nation that is both highly segregated by race and highly sensitive to racialized messaging? In other words, how do you ramp up support among voters of color without turning off white working-class voters — and vice versa?

Third Way’s study looks at some key factors that affected the 2016 election and then uses regression analysis to figure out how much of an effect each of these factors had, independent of each other.

The method is actually pretty simple: Imagine there’s a machine that looks at key demographic statistics of every US county and then guesses how each county voted in the 2016 election.

This machine has knobs that let you change how much you think each demographic attribute mattered. So you can turn up some knobs while turning down others, and then run the machine to see how it does.

The Third Way study essentially found the knob settings that best predicted the actual 2016 election results for nearly every county. (It left out counties with fewer than 10,000 voters, as well as Alaska and North Dakota, which don’t aggregate voters by county.)

So which knobs were turned up the highest when the model is closest to the actual results? In other words, what was the strongest predictor of whether a county would support Hillary Clinton or Trump?

The answer: the percentage of nonwhite voters in a county.

”Nonwhite voter influence was so much more impactful than I thought it was going to be,” Third Way’s Lanae Erickson Hatalsky told me. “We’ve written a lot of things in the past about how demography isn’t destiny, and we still believe that. But it wasn’t just nonwhite voters that voted for Hillary; it was everyone who lived in those areas.”

Meanwhile, the percentage of white working-class voters was a poor predictor of how a county voted. Yes, these counties tended to vote for Trump, but the effect was minimal.

This means focusing on the white working class “takes us in the wrong direction,” Erickson Hatalsky said.

This shouldn’t be hugely surprising. The white working-class theory assumes there are economic reasons voters leaned toward Trump. But research now hints that racial resentment activated this economic anxiety. Not only that, but the poor white working class was actually more likely to support Clinton than Trump.

Race was a huge factor, but Third Way argues there’s still room for an economic argument

But even if race was the biggest factor in the 2016 election results, Third Way argues that it doesn’t automatically mean race should be the thrust of Democrats’ message.

Erickson Hatalsky points out that racially diverse counties tend to be concentrated near cities and on the coasts. In order to win nationwide election, you need to have a message for both white and nonwhite voters, especially since those voters’ racial identity isn’t necessarily their only identity.

So what does Third Way believe that message should be?

”It’s about having an economic message that appeals to all people, including people of color,” Erickson Hatalsky said.

The think tank is especially interested in a metric called “economic sensitivity,” which tries to capture how much financial uncertainty or stress someone perceives by asking questions like, “How easily can you handle an unexpected expense?”

This metric was developed by the political data firm Catalist. The idea is that when you vote, it doesn’t matter whether other people think you’re financially comfortable; what matters is the pressure you feel.

In 2008 and 2012, black and Hispanic voters turned out at record rates. In 2016, those numbers regressed — and progressive Democrats have looked at that gap as a possible place where they can make up ground.

Erickson Hatalsky argues that it’s not reasonable to expect those voters to turn out at Obama-era rates. “We’re comparing numbers not to [the] last time Democrats won but [to] the first-ever African-American president,” she said.

So Third Way Democrats argue that the way to reach those nonvoters — which includes white voters — is with a message centered more on economics and less explicitly on racial identity.

”People think nonwhite voters want some whole different thing that isn’t about economics,” Erickson Hatalsky said. “But they want the same thing everyone else does.”

What does this tell Democrats about the way forward?

Political strategists often talk about the “story” they want to tell the American people, and they do a lot of testing to see how popular these stories are.

Third Way’s research is a bit of a Rorschach test in that you can affirm your preferred story in the data.

Third Way and many of their fellow centrist Democrats believe the story Democrats tell in 2018 and 2020 should be rooted in economic opportunity — something they feel Democrats didn’t articulate enough in 2016. They argue that this is how Democrats win over voters with various overlapping identities.

But Demos, another liberal think tank, sees things differently. Recent research by the group finds support for putting more of the emphasis on race.

”The reason progressives cannot win on anything that requires government is because government has been racialized and demonized,” UC Berkeley law professor Ian Haney López, who worked with Demos on their research, said at a Netroots Nation talk. “That’s what Trump’s doing. Whatever issue you care about, you gotta come to the table to figure out how you’re going to defeat racialized dog-whistling in order to build public confidence in government.”

When Demos tested progressive economic messages, the think tank saw bigger gains among both the Democratic base and persuadable voters when the messages made explicit reference to race, including white people.

And these gains weren’t just with people of color but with white people as well.

”Some people say, ‘You’re only trying to get black and brown folks,’” said Causten Rodriguez-Wollerman of Demos. “But guess what: White folks like this. And people of color like this even more.”

Rodriguez-Wollerman said that for decades, Republicans have dominated the storytelling around race and have elegantly married it with an economics narrative. For example, they’ve managed to tie the story of unemployment to illegal immigration. This, he says, is why Democrats need to tell a race-forward story of their own.

These stories — Third Way’s and Demos’s — aren’t necessarily at odds with each other. An economic message can be race-conscious, and race-forward messages can be based in economics.

The 2018 midterms will be the first signal to Democrats on whether they’ve struck the right balance on this race-versus-class front — and whether they’ve built a tent big and stable enough to win the 2020 election.

If it turns out they haven’t, the tent may start to fray.