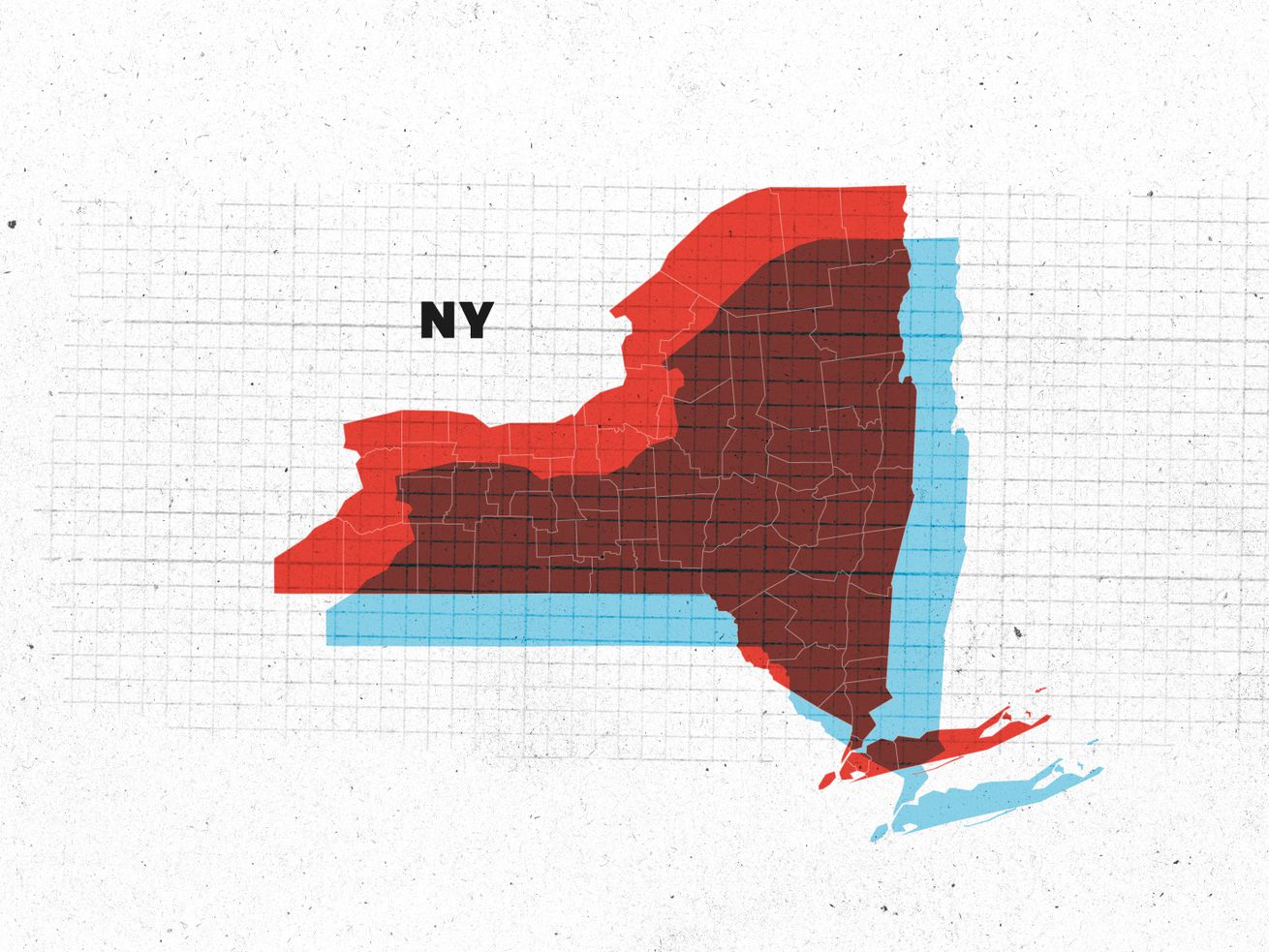 New Yorkers are headed to the polls for the second time this campaign season on September 13.

New Yorkers head to the polls for a second time this campaign season, thanks to the Empire State’s wacky schedule of separate primaries for its federal and state elections. This Thursday, key New York state offices are on the ballot, featuring a high-wattage Democratic primary for the governorship and an open race for state attorney general.

Democratic races headline Thursday’s primaries. The party — which is one vote shy of a majority in the state Senate — is fighting to take full control in November, and these contests might offer some clues on how likely that is to happen.

Republicans have effectively chosen their nominees for the major statewide races during party conventions in May, so Democrats are left to fight it out. Gov. Andrew Cuomo faces a high-profile primary challenge from actress and education activist Cynthia Nixon. Nixon is running to the left of Cuomo, but so far, she trails far behind the incumbent in the polls.

Things are a bit more interesting in the crowded, surprisingly competitive, and historic state attorney general race. New York’s top law enforcement job became available after former New York Attorney General Eric Schneiderman resigned in disgrace in May amid domestic violence allegations. Four Democrats and one Republican are vying for the office, which has attained national prominence due to its more than 100 legal challenges against the Trump administration, in addition to investigations into the Trump Foundation and Trump’s former lawyer Michael Cohen.

Here’s what you need to know about New York’s September 13 primaries.

Who are the Democrats? Incumbent Gov. Andrew Cuomo and actress and activist Cynthia Nixon.

Who are the Republicans? Marc Molinaro, the Dutchess County executive and former member of the New York State Assembly.

What’s the story? The Sex and the City star shook up the Democratic gubernatorial race when she decided to mount a progressive challenge against Cuomo. Nixon has attacked Cuomo’s poor management of the city subway system and sought to link the incumbent to corruption in Albany. Nixon has also aligned herself with New York’s rising progressive stars, including Alexandria Ocasio-Cortez.

Cuomo, a powerful political operator and son of a former governor, seemed nervous enough about Nixon’s candidacy that he scrambled to burnish his progressive credentials. But Cuomo spent most of his campaign trying to change the subject, focusing not so much on his primary opponent, but on his resistance to President Donald Trump. (Trump, naturally, obliged after Cuomo’s America “was never that great” gaffe.)

Cuomo has more than $30 million in his campaign war chest, and he has the edge in the polls. The latest Sienna College poll gives Cuomo a more than 40-point lead over Nixon. And though Cuomo has denied any presidential ambitions, he’s still on the long list of potential 2020 candidates. A 2018 gubernatorial victory will bolster such a bid.

Republicans assume they’ll face Cuomo in November, and they nominated Molinaro during their May 2018 convention. (New York parties nominate candidates during state conventions, but it doesn’t prevent others from running statewide if they garner enough signatures to get on the ballot; Cuomo is the Democrats’ nominee.) Molinaro is running as the sort of moderate Republican who’s in trouble everywhere else in the country. He’s largely avoided the topic of Trump, though he said he didn’t vote for the president. Still, a Republican hasn’t won statewide office in New York since 2002; Molinaro and the party are pinning their hopes on a Nixon upset.

New York attorney general primary: history will be made, no matter what

Who are the Republicans? Keith Wofford, a partner at the law firm Ropes & Gray.

What’s the story? The shocking resignation of Schneiderman turned the attorney general race into one of the biggest battles in New York politics. Barbara Underwood, who took over for Schneiderman but declined to run for the office, has pressed ahead with lawsuits against the Trump administration, including against the Trump family charity. Taking on the president and fighting corruption in Albany are two issues dominating the race.

Right now, the Democratic race is a total toss-up. James, the city’s African-American public advocate, was the Democratic party’s choice and has been endorsed by Cuomo and other prominent state Democrats. That should have granted James de facto frontrunner status, but it seemed to backfire among progressives, who cast her as part of the state Democratic machine. Instead, Teachout assumed the mantle of left-wing insurgent; the former gubernatorial and congressional candidate is running on her anti-corruption credentials, and she got a boost from a New York Times editorial backing her in the AG race.

Rounding out the field is Leecia Eve, an African-American attorney and Verizon executive who’s worked for Cuomo and Clinton, and Maloney, the openly gay New York congressman, who is also defending his House seat and who’s pulled ahead of James in the latest Sienna College poll, with 25 percent of the vote to James’s 24 percent. Teachout remains in third place with 18 percent, and Eve in last with 3 percent.

So it’s anybody’s race — and whoever wins will make history in November. Underwood became New York’s first woman AG this year after Schneiderman resigned, but no woman has ever been elected to the office. Three are running this time. Teachout is pregnant, and James and Eve would not only be the first women; either would be the first African American to hold the post. That also goes for the Republican candidate, Wofford, who is the first African-American candidate to receive a GOP nomination for state AG. Maloney would be the first openly gay elected statewide official.

Who are the Democrats? Incumbent state Sen. Simcha Felder and attorney Blake Morris.

Who are the Republicans? Felder will be listed on the Republican (and Conservative and Independence) lines in November. Welcome to the oddities of New York politics.

What’s the story? Oh, where to begin? Felder has become Albany’s de facto power broker. He has tormented Democrats since 2012 as a member of the Independent Democratic Conference, a bunch of rogue Democrats who caucused with the GOP, giving Republicans control of the state Senate.

In April, IDC members rejoined mainline Democrats — except for Felder. His decision to stick with Republicans left the Democrats just one vote shy of a majority. Felder says he’s doing right by his constituents; he represents a very gerrymandered district in Brooklyn with a robust Orthodox Jewish community, which leans conservative. Trump won here in 2016 by 8 points.

Felder has never faced a Democratic challenger since his election in 2012 — until now. Morris is running as an actual Democrat and hoping the district has enough progressives who’ll be angry enough to push out Felder.

There’s a catch, though: Even if Morris pulls off the Democratic upset, Felder will likely remain on the ballot in November on the Republican party line. (He won on the Democratic, Republican, and Conservative lines in 2016, and he could do it again in 2018.) Democrats are hopeful that there are enough vulnerable Republicans across the state that they can win the Senate majority outright and that this district won’t be as critical in November. But Democrats wouldn’t mind defeating him in the primary, either.

New York Senate District 18: a Democratic socialist wants to unseat an incumbent, but brings a lot of baggage to the race

Who are the Republicans? None.

What’s the story? Salazar’s candidacy brought national attention to an otherwise low-risk race; the Brooklyn district that stretches through Williamsburg, Bushwick, and Cypress Hills is pretty much guaranteed to go Democrat. Salazar is a member of the Democratic Socialists of America and drew inevitable comparisons to Alexandria Ocasio-Cortez, another DSA Latina politician. Salazar is also a first-time candidate taking on an entrenched incumbent.

But the glowing coverage of Salazar backfired when her personal biography was called into question. Salazar described herself as coming from a working-class, immigrant family, and she also identified as Jewish. But various publications began digging into her background and found many discrepancies with her narrative, which raised questions about her integrity. (Vox’s Zack Beauchamp wrote extensively about the controversy.)

It got even weirder last week, when the Daily Mail first reported that Salazar had been arrested in 2011 for allegedly committing identity theft against the former wife of Mets star Keith Hernandez. (The tabloid also claimed Salazar had an affair with Hernandez.) The charges were dismissed, and Salazar denied the claims while filing a defamation suit in 2013 over what she called false allegations. Thursday will be a test as to what wins out: Salazar’s progressive message, or the strange controversies brewing around her.