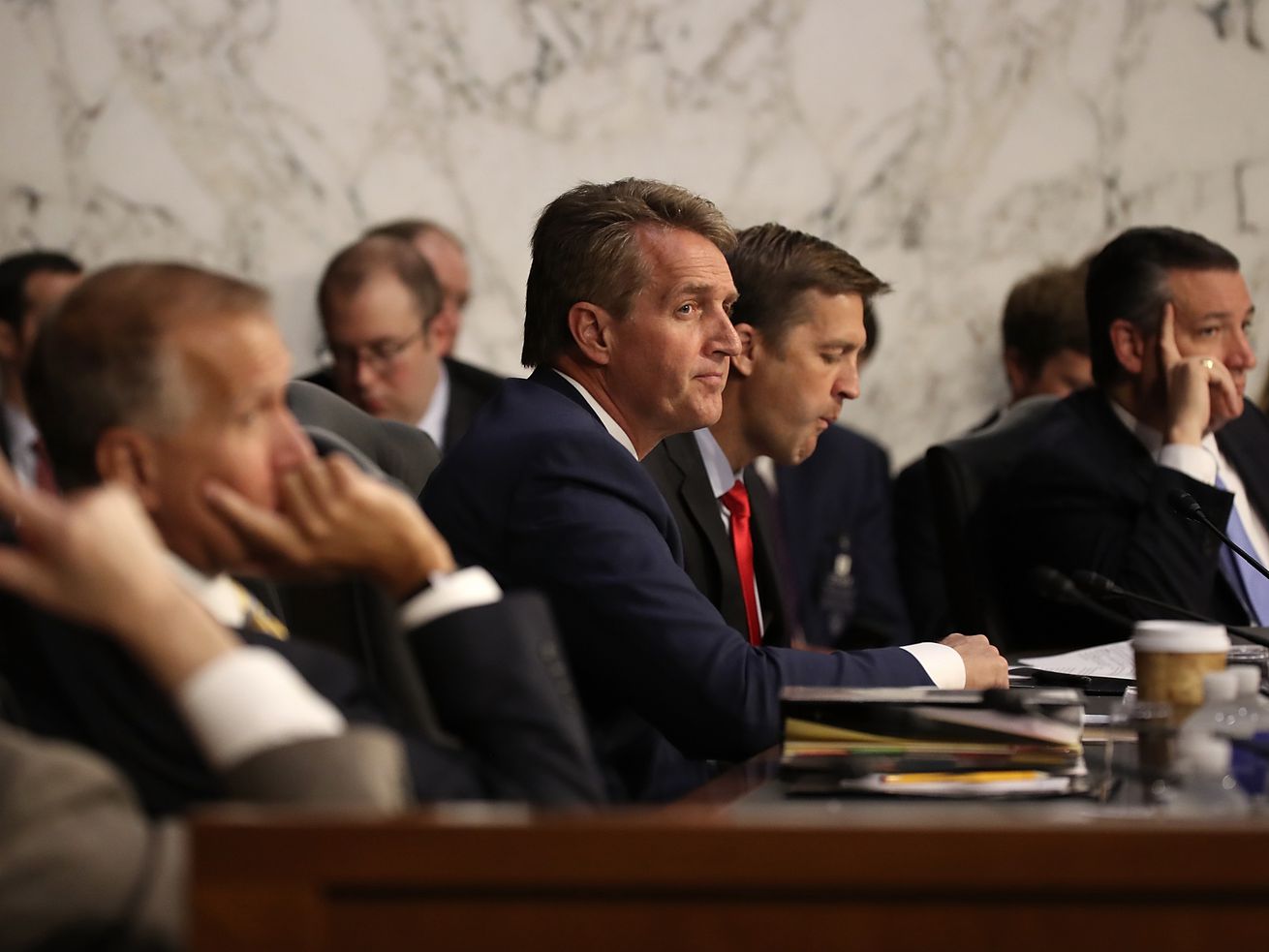 It’s the latest iteration of a common Republican phenomenon.

During Supreme Court nominee Brett Kavanaugh’s confirmation hearing on Tuesday, Republican Sens. Jeff Flake (AZ) and Ben Sasse (NE) had plenty of criticism for President Trump and his recent Twitter attack on Attorney General Jeff Sessions — but they had nothing but glowing praise for Kavanaugh.

“The comments from the White House yesterday tend to politicize the Department of Justice; they were wrong and should be condemned,” Sasse said. “My guess is Brett Kavanaugh would condemn them.”

“That is why a lot of people are concerned about this administration and why they want to ensure that our institutions hold. Thus far, they have, gratefully,” Flake said.

These statements are illustrative of an unspoken deal a number of Republican senators have made with Trump: They might disagree with much of his bombastic behavior and policy, but as long as he keeps offering up judicial nominees who continue to advance their agenda, they’ll fall in line.

In fact, Sen. Lindsey Graham made the subtext text, in a statement he directed explicitly at Trump. “You have never done anything better than to pick Gorsuch and Kavanaugh,” he said. “You can’t lose the election and pick judges. If you want to pick judges, you better win.”

What Flake and Sasse said during the confirmation hearings

Sasse made reference to Trump’s tweet sent Monday slamming Attorney General Sessions. In this tweet, Trump bashed Sessions yet again and suggested that his work at the Justice Department was costing Republicans votes in the midterm elections.

Two long running, Obama era, investigations of two very popular Republican Congressmen were brought to a well publicized charge, just ahead of the Mid-Terms, by the Jeff Sessions Justice Department. Two easy wins now in doubt because there is not enough time. Good job Jeff……

After his halfhearted callout of the White House, Sasse launched almost immediately into full-throated support of Kavanaugh and his record on the bench.

“People invariably applaud your mind, work, temperament,” he said, while touting what he described as Kavanaugh’s many merits. He went on to voice so much unbounded enthusiasm for the nominee that he quoted a Politico op-ed lauding Kavanaugh, stating plainly, “Sometimes a superstar is just a superstar.”

Flake’s remarks took a similar tack, though he advanced the criticism of the Trump administration another step. “It has been brought up today a lot of the concern on the other side of the aisle stems from the concern of an administration that doesn’t seem to understand and appreciate separation of powers and the rule of law,” the Arizona moderate said. “I have that concern as well. If you just look at what was said just yesterday by the president, I think it’s very concerning.”

“Jeff Sessions has resisted pressure from the president to punish his enemies and relieve pressure on his friends,” he added. “And many of the questions you will get on the other side of the aisle and from me will be how you view that relationship.”

But rather than using their power as senators in a party that has a bare majority in the Senate, Flake and Sasse made clear that they’re thrilled to see Kavanaugh on the Court.

This deal all but ensures that Kavanaugh will be confirmed

Given Republicans’ current razor-thin majority in the Senate, if Flake and Sasse both voted to block Kavanaugh’s nomination — a move that would be a startling rebuke to the White House — it would fail. Despite their issues with Trump and concerns that Kavanaugh could somehow further shield the president, however, there’s almost no chance of this happening.

This same phenomenon has popped up time and again. As Vox’s Matthew Yglesias wrote when Flake objected to Trump last year, “Trump skeptics in the Republican congressional caucus — especially the senators among them — need to start thinking like senators and find themselves some leverage.”

The point isn’t that anti-Trump Republicans should adopt all of my policy views. It’s that they need to engage in some self-reflection about their own policy views. Pick some things that seem important to them but unlikely to happen, pick some things that seem likely to happen but less important, and threaten to scuttle the likely things unless they get their way on the important things. That’s what legislators do — they legislate.

Instead, both lawmakers seem content to settle for an approach that’s become common among some GOP lawmakers: They’re willing to offer some basic lip service opposing the president, while doing little in the way of actual action.

Flake further signaled his willingness to confirm Kavanaugh by talking about the qualities he demonstrated outside the Court: “Judge Kavanaugh’s dedication and commitment as a basketball coach, I think, demonstrates and says a good deal about that character.”