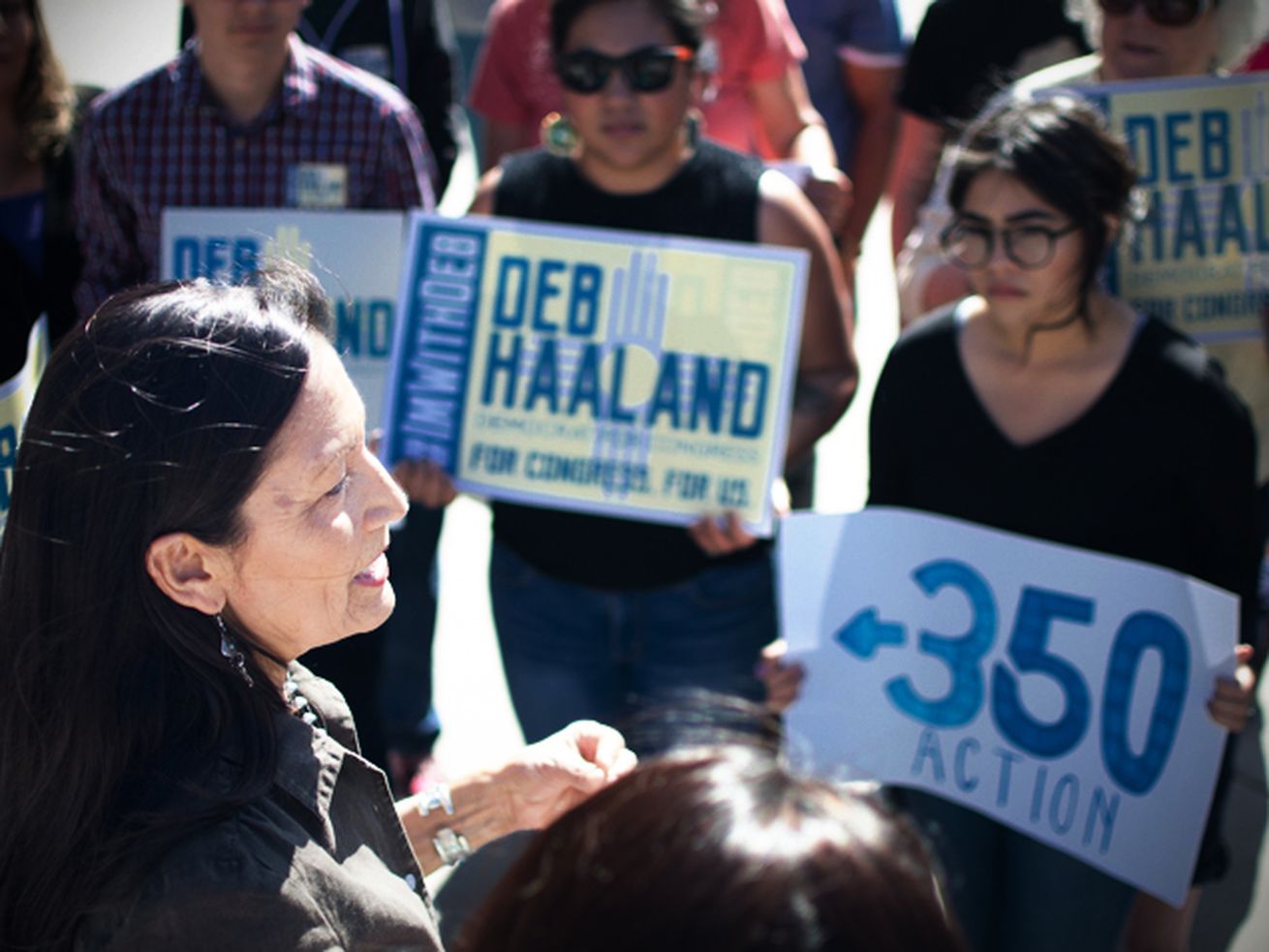 She wants more Democrats to focus on fixing climate change.

Democrat Deb Haaland is poised to make national history in November: If she’s elected — and she likely will be in New Mexico’s blue-leaning First Congressional District — she will be the first Native American woman in Congress.

Haaland, the former chair of the state Democratic Party, is a member of the Pueblo of Laguna. There are just two Native Americans serving on Capitol Hill right now, both Republican men from Oklahoma: Reps. Markwayne Mullin and Tom Cole. The significance of Haaland’s history-making bid for Congress isn’t lost on the candidate, but neither is all the hard work that has gotten her to this point.

“I think we’ve been working toward this for a long time,” she told Vox recently. “Just because you’re the first Native woman doesn’t mean you get any breaks. … It’s not something that’s freely given.”

Haaland will face Republican nominee Janice Arnold-Jones, a former member of the New Mexico House of Representatives, in November. Arnold-Jones lost in 2016 to Democratic Rep. Michelle Lujan Grisham, who is currently running for governor.

Haaland has drawn plenty of support from liberal groups for her litany of progressive stances on issues. She supports Medicare-for-all and a federal $15 minimum wage, and has promised to fight for debt-free college and universal pre-kindergarten programs if elected to Congress.

But top on Haaland’s list of policy issues is renewable energy and solving climate change. As she spoke to Vox last week, she mentioned the drought currently wracking her home state. More than 80 percent of New Mexico is in “severe” drought or even worse, according to the state’s Drought Monitoring Workgroup. Riverbeds are completely dry, according to the Albuquerque Journal.

New Mexico has also experienced a serious shortage of snow in past winters — something that impacts the state’s economy (its mountainous regions are home to ski resorts) and amount of water. If Haaland gets to Congress, she has pledged to vote against any new fossil fuel infrastructure and instead vote only for renewable energy sources — including solar and wind.

Haaland is alarmed about climate change, and she’s not sure why more people in Washington aren’t.

I recently spoke to Haaland about her history-making candidacy, her plans for increasing renewable energy, and whether she plans to vote for Nancy Pelosi. Our interview has been lightly edited for length and clarity.

New Mexico has for a while done a really good job in ensuring that native folks, native Indian tribes, tribal leaders, have a seat at the table. In fact, during the term of Gov. Bill Richardson, who was a strong Democrat, he was really good for Indian tribes. He signed a lot of legislation that put us on equal footing in many respects, and one of the things that was passed during his term was the State-Tribal Collaboration Act, which requires the state to consult with tribes on matters of importance.

I feel like we’ve done a good job; we have a number of Native American state legislators. However, we’re still kind of behind. I ran for lieutenant governor in 2014 — I would have been the very first Native American statewide elected official. We lost in the general election.

If you are elected, do you plan to try to introduce legislation to increase representation for Native tribes? Do you think Congress should do more to support Native tribes?

I don’t know if it’s actual legislation as much as it is just really advocating to make sure that Congress recognizes the fact that the United States has a trust responsibility to Indian tribes. So at every possible opportunity, I’ll work really hard to make sure tribal leaders have a seat at the table when there’s issues of importance.

I’ll give you an example — when the Republicans passed their tax plan, tribal leaders really wanted a say in what that tax plan looked like, and they were never given an opportunity for any hearing or anything like that. So I hope I can change some of that.

What are some of the issues you’ve been hearing from people on the campaign trail?

You mention New Mexico has close to 300 days of sun per year. Do you think the state is harnessing the full potential of the renewable energy power it has right now?

We are doing a really good job here, but I just think right now every single state or federal building should be using renewable energy. We should have solar panels or ways to fuel those buildings with solar energy already. If you were a homeowner and you look to put solar panels on your home, you need to get a loan for $20,000 unless you have $20,000 sitting around in the bank. [In] our state, half of our population is Medicaid-eligible, so that tells me we don’t have a lot of income to spend on things like that.

I think it’s the government’s job to work at finding a way for folks to move forward with that, in spite of the fact that a lot of folks are poor here. The future of our planet depends on us doing whatever we can right now. And instead of us giving the richest people $1.5 trillion [in] tax cuts, I really feel like we could have paid for some renewable energy infrastructure.

From my experience talking to Democratic candidates this cycle, I feel like climate change is usually not on people’s lists of the top policy issues they’re talking about. As someone that’s very vocal about it, why do you think more people aren’t talking about it as much?

I wish I knew, because if we don’t have our Earth, we don’t have anything. Everything we have, everything that we’ve made, every city that we’ve built or car that we’re driving around, is from materials we get from the earth. Not to mention the fact that we need food to sustain ourselves.

I’m just of that thought; I’m always going to be extremely passionate about climate change and renewable energy. I guess it’s up to everyone what’s important to their districts, and I completely respect that. But for me, I am going to always talk about that.

The other policy question I had was about immigration … especially given the fact that the Republican you’re running against in the general election seems fairly conservative. I’m curious how the immigration issue — especially during the Trump era — is playing out in your race.

Certainly, my opponent has stated she is not in favor [of] “sanctuary cities.” She would be in favor of cutting all funding to sanctuary cities, for example. And I wholeheartedly disagree — we need to make sure that we are watching out for our community members. It seems that they target immigrants without being provoked. I just don’t like the fact that oftentimes, folks treat immigrants like they’re criminals, and that’s not the case; that’s not always the case. Yes, there are some people who break the law, but for the most part, people are just working and trying to find a better life.

With respect to DACA [Deferred Action for Childhood Arrivals] recipients here in New Mexico and across the country, I wholeheartedly advocate for them to have a path to citizenship. We need to have more humane immigration policies across the country.

I think they are. I think they want candidates who are going to truly stand up for things, right? For example, there weren’t a lot of folks talking about moving to 100 percent renewable energy, and I have said that many times and have gotten a tremendous amount of support for that stance. To me, it’s now or never. Climate change is wreaking havoc on our world, and we have to have folks who are going to go hard on that issue. It is super important for the future of everything that we have.

Have you given any thought to whether you’d vote for Nancy Pelosi for House speaker if you win?

Just for the record, Nancy Pelosi has not asked me for my vote for speaker. However, I have a tremendous amount of respect for her. Without her, we would never have gotten the Affordable Care Act passed, not to mention the Lilly Ledbetter Act and many other pieces of historic legislation we have needed to move our country forward.

If you compare her record to any Republican speaker, she has been far more effective than any Republican has ever been. In that regard, I have a tremendous amount of respect for her. And when the time comes, I do hope to vote for a woman speaker — I can say that. I think it’s the year of the woman! I’m focused on winning my election, of course. I won’t be doing anything unless I win.