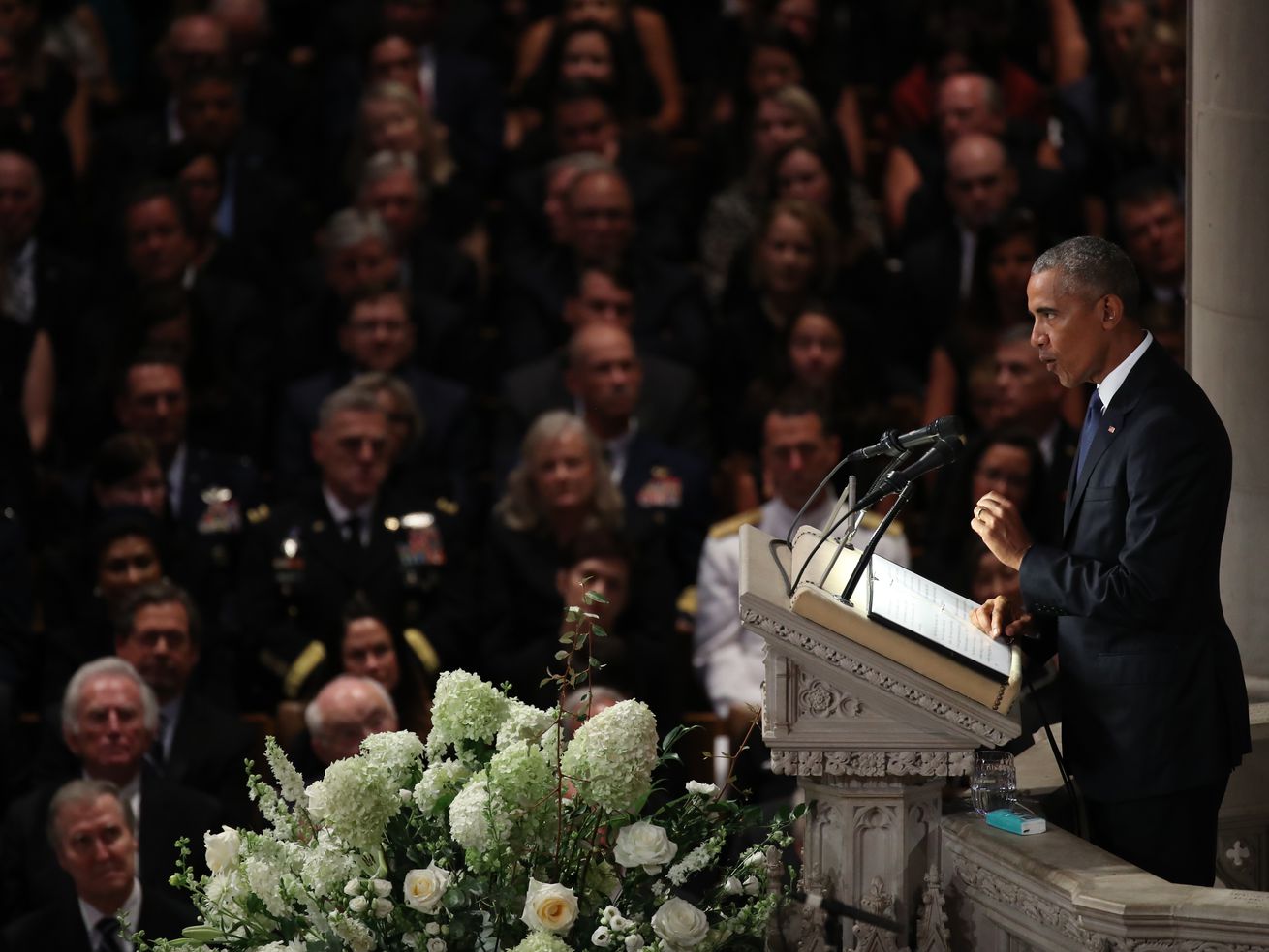 A celebration of democracy is a criticism of Donald Trump these days.

In pretty much any other moment, it would be heard as a banal speech — a respectful, but expected statement from a former president on the life of a long-time senator. It would serve its purpose and remind Americans that we live in a democracy, one based on the principle of peaceful transfer of power. Political rivals are just that, not sworn enemies. They are all part of something much larger than themselves.

It would be boring. But in the age of Trump, it was anything but.

“John cared about the institutions of self-government, our Constitution, our Bill of Rights, rule of law, separation of powers, even the arcane rules and procedures of the Senate,” Obama said, sounding like he was giving a high school civics lesson.

“[McCain] knew that in a nation as big and boisterous and diverse as ours, those institutions, those rules and norms are what binds us together and give shape to our life. Even when we disagree, especially when we disagree.”

It’s easy to imagine Obama saying similar words about McCain under a President Marco Rubio, Jeb Bush or Hillary Clinton. McCain and Obama truly do share a commitment to institutional ideals. But the details throughout his remarks get far too specific to obscure whom Obama was talking about.

“So much of our politics, our public life, our public discourse can seem small and mean and petty, trafficking in bombast and insults and phony controversies and manufactured outrage,” Obama said. “It is a politics that pretends to be brave, and tough, but in fact is born fear. John called on us to be bigger and better than that.”

This is the definition of Trump’s politics. He’s a man who once said he prefers soldiers who “don’t get caught,” referencing McCain’s years spent in a POW camp in Vietnam. He’s a man who threw a tantrum inside the White House over whether to call that man a hero in death.

McCain, himself, got into it with Trump in return. He even famously voted Trump’s healthcare bill down in dramatic fashion, which Trump took as a personal affront.

Obama is known for relishing in keeping his cool and for floating above politics. But he didn’t do it Saturday. He juxtaposed the best of McCain against the worst of Trump, without having to speak the sitting president’s name. That Obama would do it — say something about current politics in a moment he could have looked to history — speaks to how dire a situation Obama views Trump’s presidency.

Obama highlighted his experience in 2008 running against McCain for president, when racist memes and conspiracy theories flew across the internet and beyond that questioned his place of birth and his commitment to American values.

“It has been mentioned today, and we have seen footage this week of John pushing back against supporters who challenged my patriotism during the 2008 campaign,” Obama said, referencing a clip of McCain taking the microphone a way from a woman questioning Obama’s background at a campaign event in 2008. “I was grateful, but I was not surprised.”

Implied is that this does happen — and there’s no question he means Trump.

Trump was a champion of birtherism, reveling in fanning racist attitudes when Obama was in the White House. He kept it up for years . He never apologized and he even tried to blame Hillary Clinton for his own actions.

Obama ended in a final thought on McCain that serves as the perfect rebuttal to Trump: