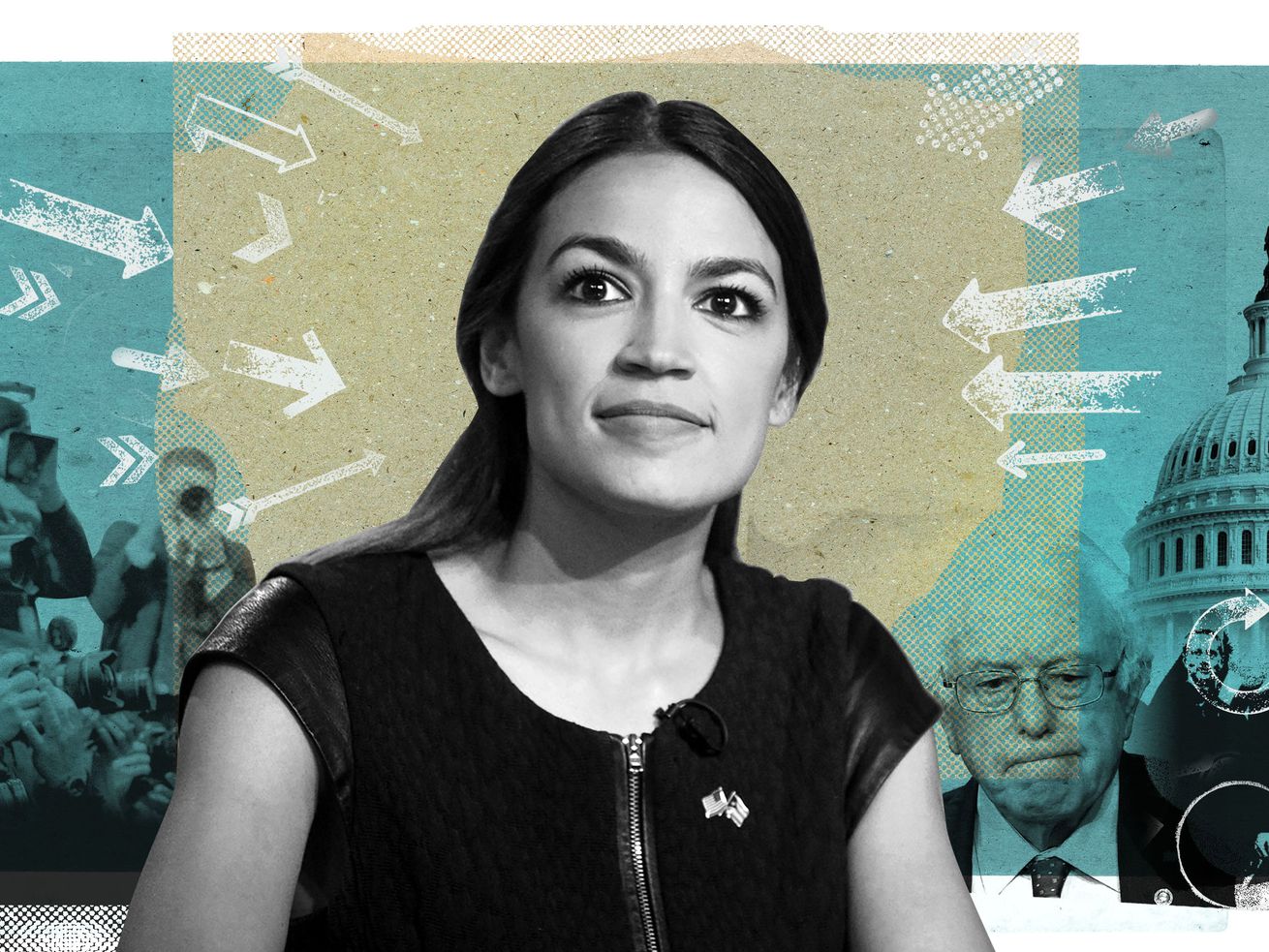 Male politicians aren’t told to put training wheels back on after a fact check.

Alexandria Ocasio-Cortez isn’t just a House hopeful, but an emerging Democratic star whose been barnstorming the country with Sen. Bernie Sanders for progressive candidates since she defeated an establishment congressman earlier this year.

Sanders and Ocasio-Cortez are both self-described socialists. They both energize the left. And they both rocketed out of obscurity to the center of the political debate. But there’s a difference between how the Washington establishment treats them. Sanders skeptics attack his ideas; they challenge him. Ocasio-Cortez’s critics not only critique her words, but question whether she should have a voice in the public debate at all.

“This is a person not ready for prime time, certainly not ready for Congress,” the ever-quoted voice of the Washington establishment Norm Ornstein tweeted in response to her answer on a question about Israel. “She should stop campaigning & do a crash course on basics, including economics and foreign policy. Otherwise, she will stumble badly out of the blocks and do major damage. Early impressions hard to erase.”

Writing in the Daily Beast, Matt Lewis offered the “telegenic it girl of the left” some advice: “You have the potential for a very bright future. Don’t blow it. Take your time. Avoid overexposure. Bone up on the issues. Do the hard work. There’s no reason to be in a rush.”

Ocasio-Cortez pulled off an incredible political achievement, she’s been courted by candidates nationwide who want her endorsement, and her résumé stacks up against the men her age in Congress — but that’s not good enough.

Research in science, business, and many other fields has shown again and again that when women go for a job, they’re held to a higher standard than the men around them. Ocasio-Cortez’s critics are acting out the same story in politics. In a town where male politicians are allowed to get policy facts wrong without losing credibility, Ocasio-Cortez’s mistakes are held up as evidence that she’s not up to the task.

The Washington Post’s Fact Checker columnist Glenn Kessler wrote a robust listicle that’s become the foundation of Ocasio-Cortez skepticism. Kessler unpacks statements that she’s made in recent months, concluding that quite a few are “false.”

In one example, Ocasio-Cortez calls an Obamacare premium a tax, which it’s not. “This appears to be an example of not understanding policy nuances,” Kessler wrote.

Ocasio-Cortez has been criticized for a variety of comments — on Israel and Palestine, on the cost of Medicare-for-all, and on a remark about what it costs when people die without health care. Her answers aren’t all great; she misspeaks, or she just gets things wrong.

Many politicians do the same. “The average member of Congress might easily make many bloopers over the course of so many live interviews,” Kessler writes. The difference is what happens next. No one demands those politicians go back to school, or shut their mouth for a few years until they’re more seasoned. The standard in Washington allows politicians to say things that are untrue without harming their reputation as a serious policy thinker and political operator.

For example, Paul Ryan’s been fact-checked for years and he’s still considered an ideas man. Politifact has collected some of Ryan’s “pants on fire” claims, like:

His legacy as a smart policy thinker is secure. Even in a farewell piece in the New York Times Magazine, Mark Leibovich describes listening as Ryan took a call from the president, who wanted to compliment him on a Fox News appearance. Ryan, Leibovich wrote, “used the opportunity to steer the conversation to the subject of trade policy.”

This isn’t an argument to hold members of Congress to a lower standard. We should scrutinize their ideas and their plans and question whether they should represent us. But we shouldn’t use that standard for some candidates like Ocasio-Cortez and give men a pass who we think look the part of a politician, like tall, blue-eyed Paul Ryan.

Even when women are really good, they aren’t good enough

Ocasio-Cortez is experiencing a phenomenon that’s been well documented across fields: Women are held to a higher standard than their male peers.

In a study, researchers at Yale University found that even when résumés were identical except for the name, in this case, John or Jennifer, “science faculty members were more likely to perceive John as competent and select him for a hypothetical lab manager position.”

Another study by researchers at Columbia University, Northwestern University, and the University of Chicago found in a hiring exercise that women’s math skills were underestimated compared with men’s. The result: Participants chose lower-performing men over higher-performing women for mathematical work.

In corporate America, meanwhile, women are way underrepresented on company boards. Those who have made it onto boards “had to be more qualified than men to be considered for directorships,” concluded Deborah Bell, a data scientist, and Boris Groysberg of Harvard Business School.

Ocasio-Cortez has faced subtle digs about her background that wouldn’t normally be an issue. Michael Graham, writing for CBS, quipped that “there’s a lot to like about the bold, outspoken battler from the Bronx who, until just a few months ago was still tending bar.” (Graham also noted that she’s “enthusiastic” and “attractive,” before getting to her economics degree from Boston University.)

What he left out: Her bartending career began seven years ago when she had just graduated from college and was trying to help her family stave off eviction. She’s also started her own publishing house for children’s books, she was an education researcher, she worked on the Bernie Sanders campaign, and she became involved in high-profile nationwide activism.

The bartending (and waitressing in a taqueria, which also gets frequent mentions) is a tax on her. Similar situations are a boon for men, showing their “authenticity.” Former House Speaker John Boehner used to sweep the floor of his father’s bar, a story told about him with affection and admiration when he was in office. Former Senate Majority Leader Harry Reid’s scrappy upbringing was similarly considered an asset.

Her résumé is pretty similar to that of the bulk of members of Congress. Most members are elected after serving in another office, working in politics or policy, or working for a politician. Business, law, and education are the next most common fields. Ocasio-Cortez is no less qualified. She’s just perceived that way.

We need more women in Congress

Women in Congress make a difference.

As my colleague Sarah Kliff has reported:

Political science research has found this over and over again: Women legislators are more likely to introduce legislation that specifically benefits women. They’re better at bringing funding back to their home districts. And, to put it bluntly, they just get more shit done: A woman legislator, on average, passed twice as many bills as a male legislator in one recent session of Congress.

Kliff cites the work of Michele Swers, a political scientist at Georgetown University, whose research shows that women in Congress focus on bills and policies that relate to women specifically — such as increasing paid leave or prosecuting violence against women.

This is even true among men and women of similar ideologies. One of Swers’s papers found that liberal female legislators co-sponsored an average of 10.6 bills related to women’s health — an average of 5.3 more than their liberal male colleagues.

Her hypothesis as to why speaks directly to the experience of Ocasio-Cortez.

”If women … underestimate their qualifications for office, then only the most qualified, politically ambitious females will emerge as candidates,” Anzia wrote. “The women who are elected to office will perform better, on average, than their male counterparts.”

The solution isn’t to lower the floor. The goal isn’t to get less qualified women into the halls of Congress to match their male counterparts. The goal is to encourage a diverse pool of people to run for office, to bring their experiences, smarts, and talents with them. But to do it, we have to acknowledge what happens to women in leadership positions across fields. They face bias that holds them back. And it’s holding the country back too.