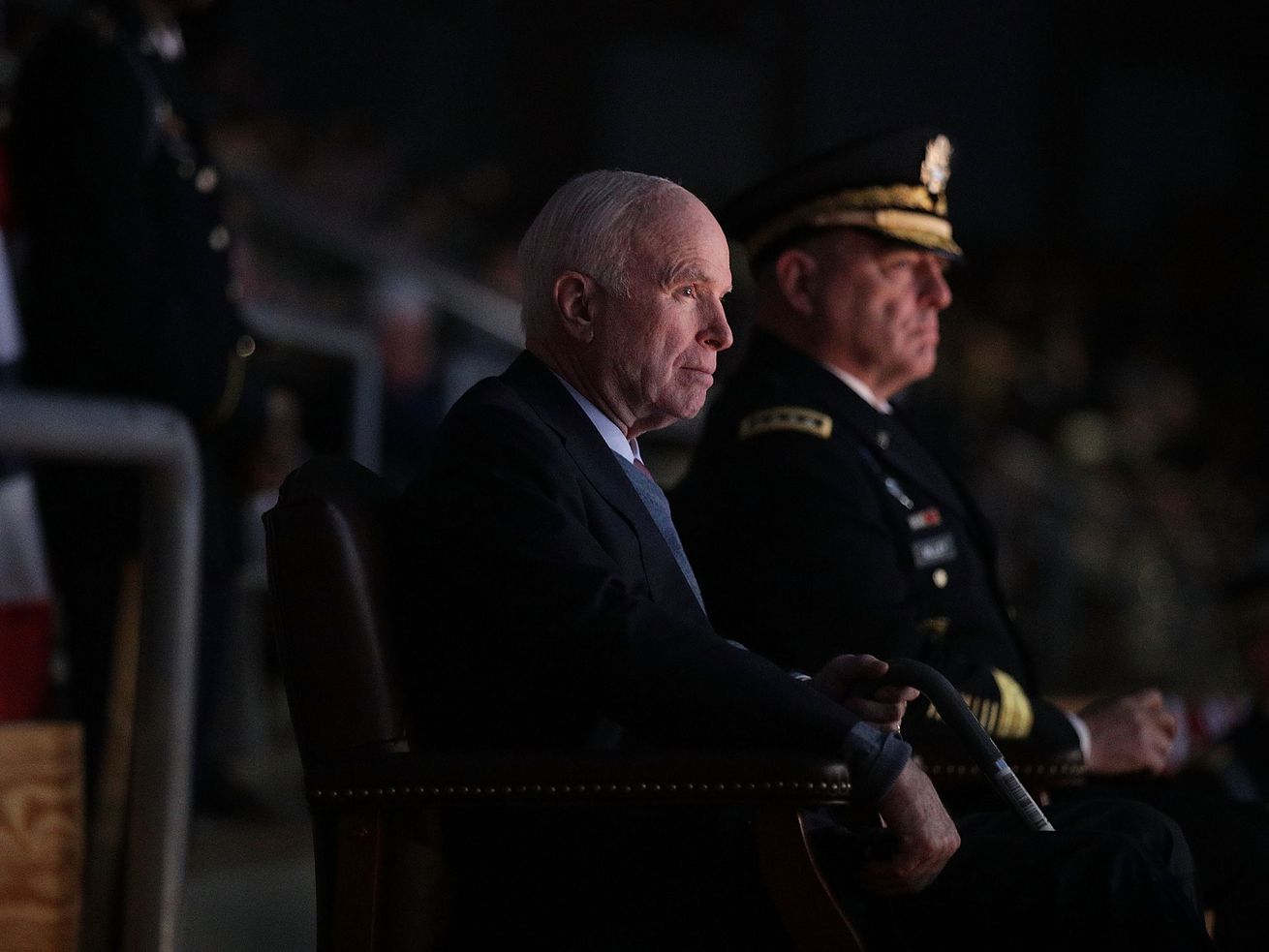 His look at the statesman’s “human genuineness and political professionalism” is still relevant today.

It’s no easy task to capture the real Sen. John McCain — a man and a politician of contradictions. There was the witty, straight-talking maverick, and the veteran senator who voted with his party more often than not (though not as frequently as leadership would have liked). There’s the indefatigable campaigner who was capable of owning up to mistakes and defending his opponents, and the man who introduced Sarah Palin’s version of anti-establishment politics to a national stage; the Vietnam prisoner of war who wouldn’t abandon his men even in the face of extreme brutality, and the legislator with a complicated legacy on torture; and the anti-candidate who ran twice for America’s highest office. Luckily, someone’s done it well.

David Foster Wallace spent a week on the campaign trail in 2000 with McCain as he ran for the Republican presidential ticket. The nearly 25,000-word article in Rolling Stone that followed remains one of the best pieces of writing you’ll read on the late Arizona senator, even almost two decades later.

Wallace, a writer whose cynicism famously warred with his sincerity, can’t help but appreciate McCain’s personal integrity and authenticity: the exact humanity that has led to an outpouring of sentimental memories from colleagues, reporters and political opponents alike since he died Saturday evening.

Wallace also grapples with how that version of a man — honorable, likeable, human — can also be a cut-throat, ambitious politician. That very question of how two versions of one person coexist is as relevant today as it was almost 20 years ago.

In 2000, McCain’s primary campaign was propelled by Americans’ deep desire for authenticity in the face of their post-Watergate, post-Monica Lewinsky cynicism and Republican voters’ rejection of more traditional candidates like George W. Bush. Sound familiar?

It was a “moment of almost unprecedented cynicism and disgust with national politics, a moment when blunt, I-don’t-give-a-shit-if-you-elect-me honesty becomes an incredibly attractive and salable and electable quality. A moment when an anticandidate can be a real candidate,” Wallace wrote.

Wallace assumes the young, hip readers of Rolling Stone share his cynicism, and throws his and their mistrust in sharp relief with McCain’s “unfakeable humanity.”

Part of that authenticity, particularly for Wallace, comes from McCain’s history. McCain spent five and a half years as a prisoner or war in North Vietnam’s infamous “Hanoi Hilton” prison — but could have avoided it, had he been willing to break the US military’s Code of Conduct for Prisoners of War. After being tortured and “delirious with pain for weeks,” Wallace writes, the commandant of the prison offered to let McCain, the son of a top-ranking US naval officer, go. But McCain refused to leave ahead of the other POWs who’d been captured first:

Try to imagine it was you. Imagine how loudly your most basic, primal self-interest would have cried out to you in that moment, and all the ways you could rationalize accepting the offer. Can you hear it? It so, would you have refused to go? You simply can’t know for sure. None of us can. It’s hard even to imagine the pain and fear in that moment, much less know how you’d react.

But, see, we do know how this man reacted. That he chose to spend four more years there, in a dark box, alone, tapping code on the walls to the others, rather than violate a Code. Maybe he was nuts. But the point is that with McCain it feels like we know, for a proven fact, that he’s capable of devotion to something other, more, than his own self-interest.

The most interesting thing for Wallace about McCain was accepting that “human genuineness,” that selflessness, and puzzling out whether it and “political professionalism” could coexist. Can McCain, for instance, respond both as a human and as a politically shrewd operator to a mother telling a story about her son becoming disillusioned by the negative turn the Republican primary had taken — the same negative turn that was hurting McCain in the polls?

Donna Duren’s story was a far, far more devastating indictment of [Bush’s] campaign tactics than anything McCain himself could say, and is it possible that McCain, on the theater’s stage, wasn’t aware of this? Is it possible that he didn’t see all the TV field producers shouldering their way through the aisles’ crowds with their cell phones and know instantly that Mrs. Duren’s story and his reaction were going to get big network play and make Bush2000 look bad? Is it possible that some part of McCain could realize that what happened to Chris Duren is very much to his own political advantage, and yet he’s still such a decent, uncalculating guy that all he feels is horror and regret that a kid was disillusioned? Was it human compassion that made him apologize first instead of criticizing the Shrub, or is McCain maybe just shrewd enough to know that Mrs. D.’s story had already nailed Bush to the wall and that by apologizing and looking distraught McCain could help underscore the difference between his own human decency and Bush’s uncaring Negativity? Is it possible that he really had tears in his eyes? Is it (ulp) possible that he somehow made himself get tears in his eyes because he knew what a decent, caring, non-Negative guy it would make him look like?

Maybe the two can coexist – “humanity and politics, shrewdness and decency. But it gets complicated,” Wallace concludes. And for all his flaws, Wallace excels at complications.

The piece is as much a look at the circus of presidential campaigns — and those who report on them — as it is a profile of John McCain, but it’s better for it. In grappling with the “truth and bullshit” of the campaign trail and the ways candidates, their staffs and the journalists covering them are all working to create both, Wallace turns a week on the Straight Talk Express into an examination of contemporary politics. He gets at the heart of the “yin-and-yang paradox” of McCain, and of American political consciousness.

You can read the essay in its entirety here.