THE UK’s roads will be clogged by a whopping 14.5 million cars this weekend, according to new research.

The August bank holiday is the last chance for Brits to enjoy a summer getaway, and it promises to be a busy one.

According to figures from INRIX and RAC, around 11.2million drivers have planned journeys between Thursday and bank holiday Monday.

Another 3.2million motorists have said they will be enjoying a leisure trip this weekend, but are yet to decide which day they will travel on.

Thursday is due to see 3.6million drivers make an early getaway, while Friday and Saturday are set to be the busiest days, with a combined 7.2million trips planned.

Traffic will ease considerably on Sunday, picking up again on Monday with 2.4million journeys to take place. 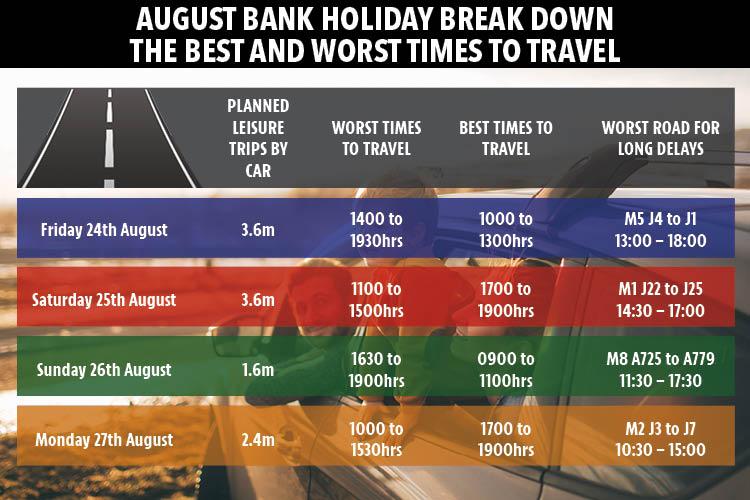 Congestion will kick off at about 2pm on Friday, experts say, as drivers try to beat the post-work rush.

Drivers in the West Midlands will see some of the worst delays on Friday, adding an extra hour to their journey on the M5.

The trip between junctions four (Bromsgrove) and one (West Bromwich) from 09:30 to 14:00 on Friday could take four times longer than usual.

The M20 in Kent, junctions nine to three, usually takes 22 minutes — but could take more than hour to complete on Friday morning as families head to Dover and the Channel Tunnel.

Eight miles of roadworks are not being lifted on a stretch of the motorway between Leicester and Nottingham.

The M4, which connects South Wales and the scenic West Country to central England, will also be exceptionally busy.

And those travelling on the M1 can expect similar congestion on Saturday, with at least 45 minute delays.

Motorists wanting to avoid delays have been advised to travel between 10am-1pm on Friday, and 5pm-7pm on Saturday.

RAC traffic spokesman Rod Dennis said: “While the late August bank holiday is not typically one of the busiest on the roads due to it falling in the middle of the school holidays when people are already away, either in the UK or abroad, it still has huge potential to bring gridlock to major roads, especially if we were to see the sun make a welcome comeback.

“There are plenty of known hotspots on the motorway network but probably the single biggest one in the summer months is the Almondsbury interchange at Bristol, where the M5 and the M4 meet.

“As tens of thousands of drivers head for Devon and Cornwall the coming-together of traffic leads to regular tailbacks every Friday afternoon.”

Josh Kidd, INRIX data scientist, said: “The best general advice to anyone driving to spend some time away from home this weekend is to travel as early or as late in the day as possible in an effort to avoid the worst of the traffic.

“However, on Friday, the joint busiest day this weekend, our data suggests drivers should set off between 10:00 and 13:00 to avoid clashing with commuters and other people planning a bank holiday getaway.”

Experts also warned drivers of the danger of not checking their car tyres before heading out on a final summer road trip for the year.

Martin Barber from Halfords Autocentres, said: “It might be tempting to just get in your car and drive off for the bank holiday but it does pay to spend a little time getting your tyres checked before you hit the road.

“Although these types of checks are simple, it is really important that they are carried out regularly as it helps avoid hassle on road trips.”