JENNIFER Lopez burst into tears as she picked up her Vanguard Award at the MTV VMAs after putting on an epic performance of her hits.

The 49-year-old singer received the Vanguard Award, a gong recognising accomplishments in music and film.

But before she accepted the accolade, she took to the stage to prove exactly why she had earned it.

J Lo took to the stage in a flowing gown surrounded by backing dancers before revealing a glittering gold body suit.

She performed hits including Jenny From The Block, I’m Real, Get Right and My Love Don’t Cost a Thing before somehow fitting in a costume change, reappearing on stage in a glittering jumpsuit.

The one-piece featured a plunging neckline and large belt and Jennifer rocked a glittering baseball cap before twerking for the audience, shaking her famous booty.

Past recipients include Janet Jackson, Madonna, Beyonce, Rihanna but Jennifer is the first Latinx artist to receive the accolade since the award was introduced in 1984.

Her stunning performance was her first since way back in 2001 but it was certainly worth the wait, and the star went on to win a second award for Best Collaboration for her track Dinero which featured DJ Khaled & Cardi B.

Earlier in the evening, she had arrived on the pink carpet in a stunning silver gown.

Jennifer arrived on the arm of boyfriend Alex Rodriguez, showing off her incredible curves in the figure hugging dress.

Also flaunting her curves was new mum Cardi B who showed off her incredible post baby body on the pink carpet.

The 25-year-old only gave birth to her first child on July 11, but looked stunning in an off the shoulder pink wrap style dress less than six weeks after welcoming daughter Kulture Kiari Cephus.

Cardi was all smiles for the waiting photographers, which is no surprise considering she is nominated for 12 awards. 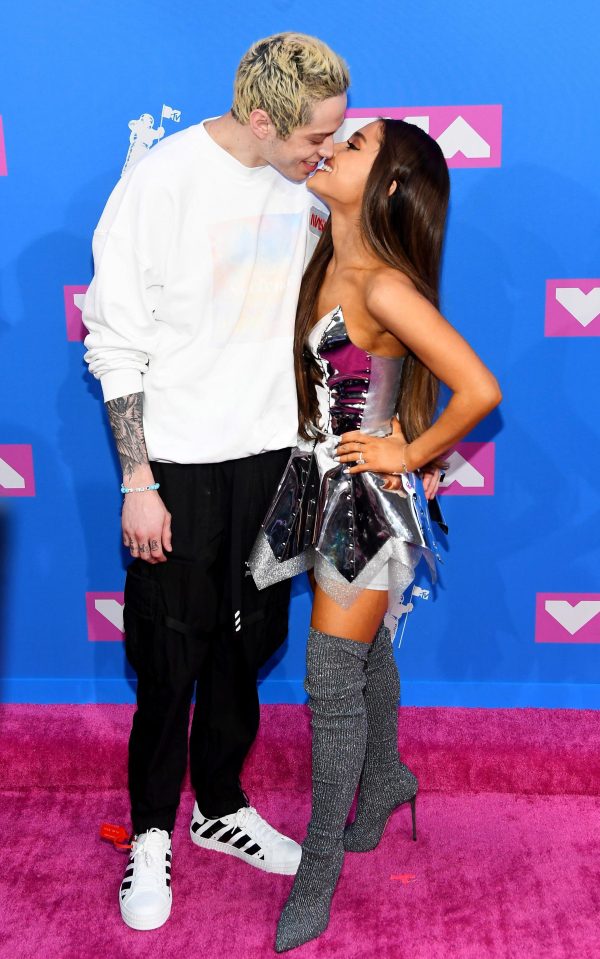 The couple packed on the PDA for the cameras

Ariana Grande also looked like the cat who got the cream as she put on a loved up display with fiance Pete Davidson.

The couple – who became engaged after a whirlwind romance – kissed, cuddled and smiled for the cameras before heading inside.

The singer was a winner on the night for Best Pop, and gave fiance Pete a big kiss before heading on stage.

Ariana thanked her fans and family before adding: “Pete Davison, thanks for existing, I love you.”

She then performed her single God is a Woman surrounded by female dancers before her mum and grandma joined her at the end.

Nicki Minaj won the first award of the night for Best Hip Hop.

She then jetted downtown to perform at the Oculus close to the World Trade Centre memorial.

Nicki was dressed in a gold ensemble where she performed a medley of songs for her delighted fans.

Earlier, there was drama before the show even began as Kylie Jenner and Nicki were ‘moved away’ from each other after a Twitter spat.

Kylie had arrived wearing white as she arrived to support boyfriend Travis Scott, although the couple didn’t seem to pose together on the pink carpet.

Inside the couple sat together but they looked miserable even as they shared a quick kiss.

Meanwhile Rita Ora looked sensational in a sheer black gown which featured a swirling pattern all over it, which was even replicated in her eye makeup and on her hands.

Rita went braless and her black underwear was clearly visible through the sheer fabric.

She picked up the Best Dance award for her track Lonely Together with late Swedish DJ Avicii.

Bringing some colour to the carpet was Camila Cabello, who looked beautiful in a blue tie-die strapless gown.

It was a big night for the Havana singer, winning Artist of the Year and Video of the Year.

Madonna presented a stunned Camila with the Video award, after a rambling speech where she also paid tribute to Aretha Franklin.

Viewers were unimpressed and somewhat confused by what the star had to say, with one writing on Twitter: “So let me get this straight: The #VMAs tribute to #ArethaFranklin featured no performance and 10 minutes of Madonna talking…about herself?!?!?”

Another added: “Madonna talking about guitar lessons, Paris baguettes and her ass hanging out while she looked for a stiletto with the image of Aretha Franklin behind her is everything I expected from the #VMAs”

Artist of the Year – Camila Cabello

Video with a Message – Childish Gambino

Meanwhile model Winnie Harlow also looked sensational on the pink carpet in a sheer dress and metallic heels before changing into a second outfit, consisting of a sheer black lace dress.

The 24-year-old is the VMAs official fashion correspondent, which is no surprise considering her own personal style, however other attendees did not suffer the same fate and totally missed the mark.

Singer Bebe Rexha was one of the many stars to wear silver on the pink carpet, choosing a long sleeved cropped top and matching skirt.

She was joined by her former The Hills co-star, Audrina Patridge who also opted for a metallic dress.

Supermodel Karli Kloss will be topping many best dressed lists in her metallic gown, which featured thigh high splits on both legs.

A number of male stars stood out on the pink carpet too, with Gucci Mane wearing a pink striped jacket with embellished detailing.

Meanwhile Liam Payne kept it simple in black trousers and a crisp white shirt – but looked like Simon Cowell in the process.

Most Read in TV & Showbiz


GMB reveals Kate Garraway once breastfed a COW – as she says: ‘I’m not proud’

The first people to arrive on the bright pink carpet were Jersey Shore’s Vinny Guadagnino and Pauly D, who co-ordinated in monochrome outfits.

Their co-star JWoww showed off her figure in a black clinging dress and thigh high boots.

Chantel Jeffries put her long legs on display in a purple strapless dress with a side train.

We pay for videos too. Click here to upload yours.