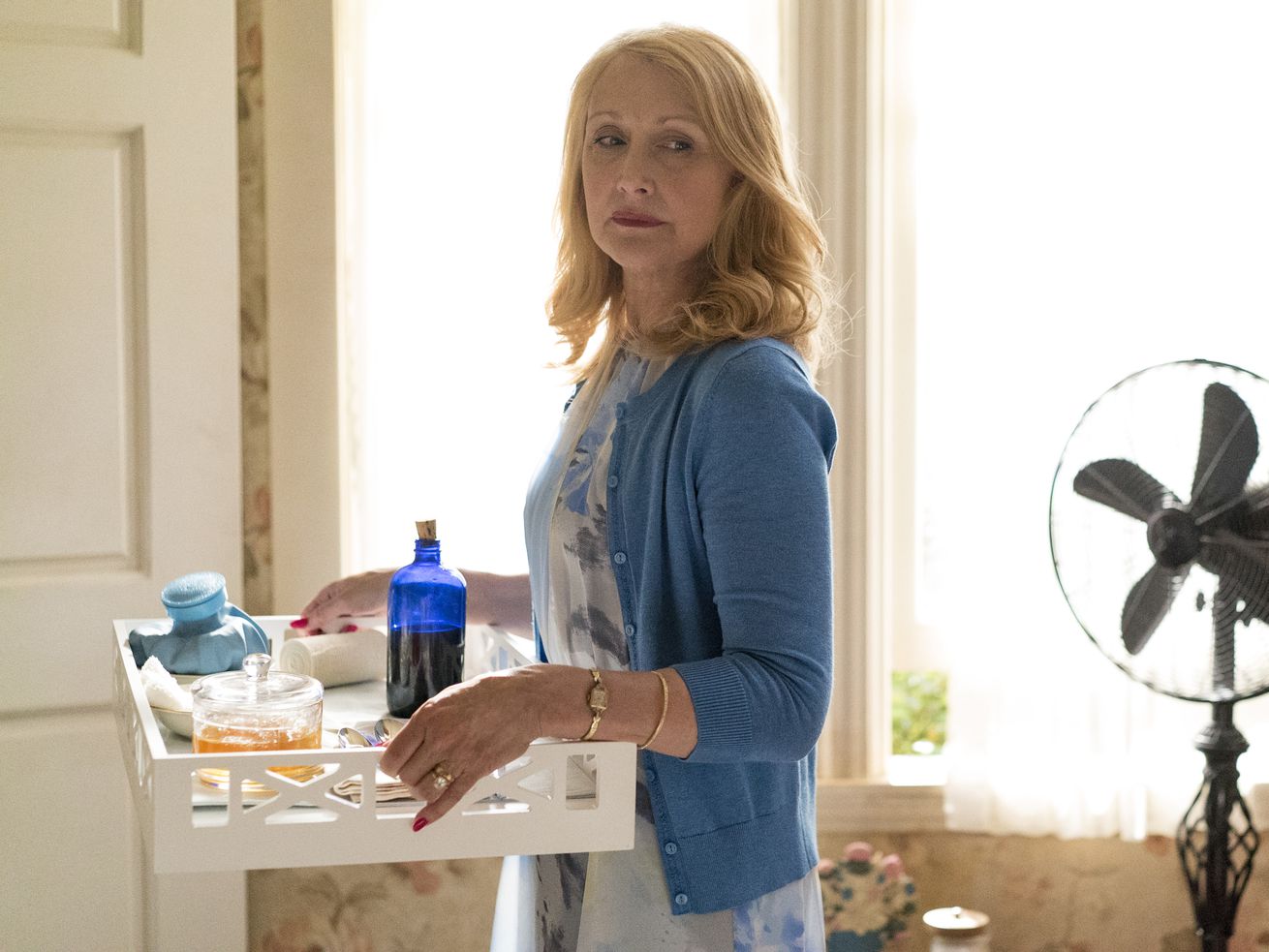 The men of Wind Gap are still in denial about what the town’s women are capable of.

If you’ve been watching Sharp Objects, you know that solving the murder mystery isn’t really part of the story the show seems most concerned with telling. For the last six episodes, we’ve been examining the underpinnings the Wind Gap murders, mostly through the lens of Camille’s (Amy Adams) deranged family life and her inescapable past.

But because it has spent so much time showing us the local color of Wind Gap, when Sharp Objects finally sinks its teeth into the murder mystery at its core — as it does in “Falling” — the result is something a little more satisfying — due to all the personal stakes involved — than the typical quest to figure out whodunnit.

A major development in “Falling” is that Wind Gap’s police chief, Vickery (Matt Craven), has settled on who he believes is the murderer: John Keene (Taylor John Smith). There’s just one problem: Sharp Objects has telegraphed, in a number of ways, that Keene didn’t do it.

One reason I don’t believe Keene killed both girls is that Vickery is so very sure he did. Vickery, if you’ve been paying attention, has been one of Sharp Objects’ most inept and dishonorable characters since the show began. He’s been particularly cruel to Camille. And the way he used the promise of fame to coerce a dirty confession from Keene’s girlfriend is clearly supposed to leave a sour taste in our mouths.

While talking to Camille about how he’s dealt with his sister’s murder, Keene reveals something striking that regarding the mentality of Wind Gap’s men. He tells her that men are supposed to keep their emotions in check; otherwise they’re looked down upon, and it’s this mentality that’s deeply affecting him.

“People think I did it because I cry about it,” he tells her. “[They say] denial is good for men.”

John’s comment seems to indicate that a more typical reaction would be for him to mire himself in denial: denial of his emotions, denial of his pain, and denial of the situation at hand. Men are supposed to be strong, or at least appear strong and firm. And because he’s not acting the way men of Wind Gap are supposed to, he’s Vickery’s prime suspect.

Perhaps John’s comment is also Sharp Objects hinting at how we should interpret the chief’s behavior. Vickery is in denial that there could be other suspects in the murders. He’s in denial of how much he’s in over his head in the investigation, how little evidence he has against Keene, and how much he’s written off other suspects — he just wants to get these cases solved. We’re privy to how slapdash he’s handled the case and how desperate he is to close this mystery. And he’s made a grave mistake in thinking Keene is the killer.

The show is now pointing us toward Adora being the killer, but I don’t believe it

“Falling” contains a major revelation: Adora killed Camille’s sister Marian when she was a child because she suffers from Munchausen syndrome by proxy. It’s explained rather bluntly in the episode, through an interview Willis conducts with Marian’s former nurse: The disease involves making your child sick to receive attention, and in Adora’s case it was Marian. We also see that Adora is having a relapse and is slowly poisoning Amma.

The major problem for Amma is that no one but Camille (and Willis to some extent) know about Adora’s true nature and her possible connection to the murders (it’s unclear if Willis has made this connection yet). Willis gives Camille Jackie O’Neil’s requests for Marian’s autopsy results and medical records, signaling she knew something was fishy about the way Marian died. And we also find out that the nurse’s diagnosis has largely been swept under the rug — after she went to the police, she was fired from her job (Vickery and Adora are friends). Further, the nurse’s reputation has been ruined (accusations of drug abuse) so no one wants to believe her.

It all comes back to a central idea of this story: There’s a benevolent stripe of sexism in Wind Gap such that no one believes, or wants to believe, that the women of Wind Gap could be capable of terrible things. And the only people attuned to the idea of what Wind Gap’s women are capable of are Wind Gap’s other women.

That idea extends to Camille being the only person who believes her mother should be the prime suspect in the murders of of the other two girls, even though previous episodes of Sharp Objects have shown that Adora had relationships or friendships with the girls. It also could explain how and why Jackie knows about how Adora hurt Marian (another revelation), but no one will believe her.

The men of the town are conditioned to believe that though Wind Gap’s women gossip and stab each other in the back in petty ways, they’re not really capable of deranged, twisted, violence.

It’s crystallized neatly in a small scene at the end of “Falling.” Chief Vickery tells Amma’s two friends to be careful and watch out because a drunk driver could come careening down the highway and accidentally hurt or kill them. Vickery automatically refers to the hypothetical driver as a man, and is quickly corrected by the girls.

“Word of advice, keep your eyes open. Some drunk comes flying down this road, he’ll hit ya before he sees ya,” he tells them.

“Or she, don’t be sexist, chief,” one of Amma’s friends responds.

The irony is that Vickery watched Camille drive past the girls in her car just seconds earlier. Perhaps he didn’t realize it was her. And I suppose you could make the argument that Camille had sobered up since drinking earlier in the episode (with John Keene and that Bloody Mary). But all season long, she has been chugging vodka and then driving without the chief noticing, even if he has his eye on her.

That’s why, while the Adora revelation provides quite the shock, I don’t think she is the actual killer. The murders, we’ve been told, are of the violent and passionate variety. Adora slowly poisoned Marian and was, as Sharp Objects explains, more concerned with being seen as a healer or savior. That doesn’t match up with the nature of murders. I still fully believe Amma is the killer, so I’m wondering if the show will make good on my theory and give us a final twist.