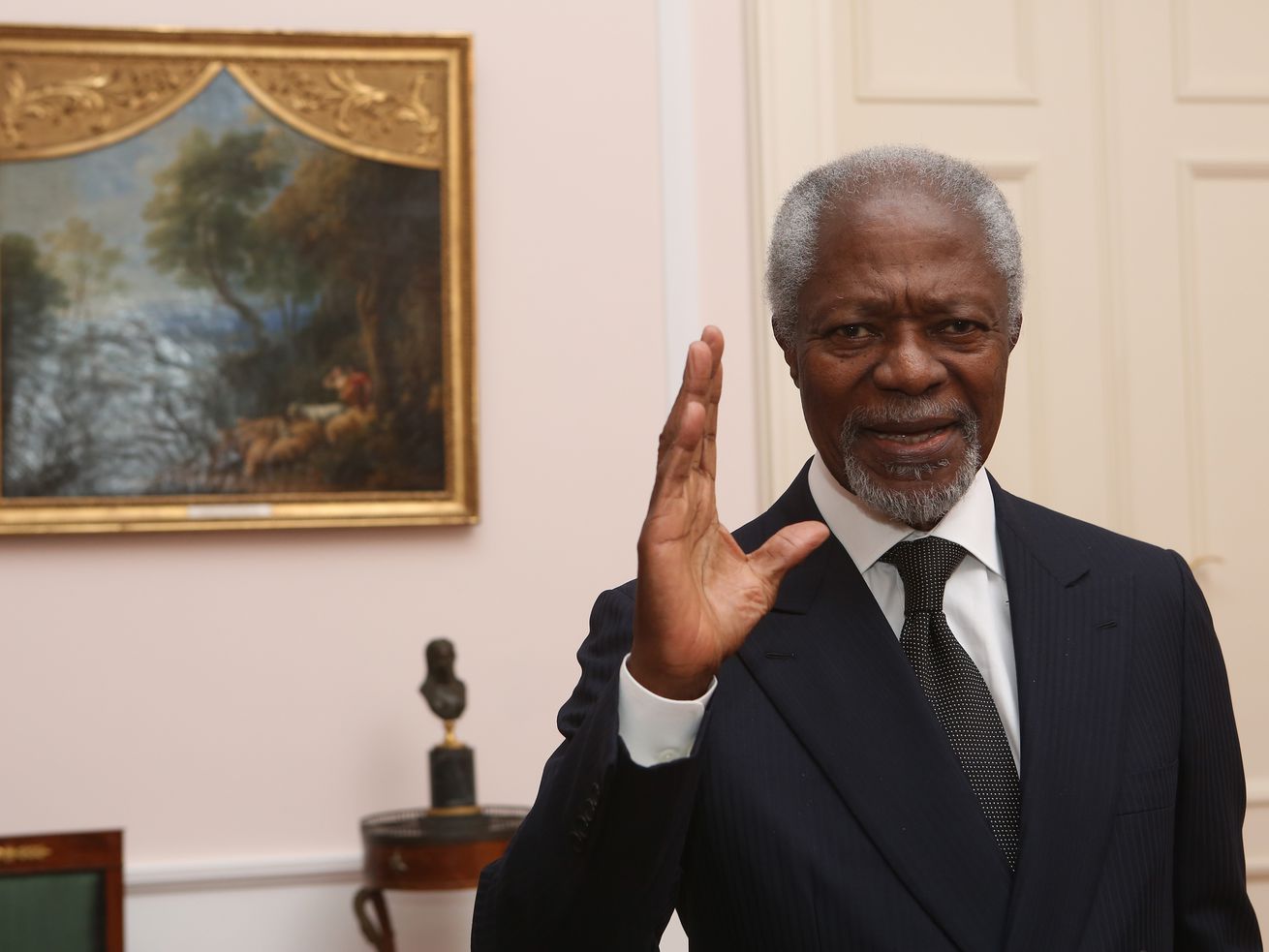 The Nobel Peace Prize laureate was one of the world’s most celebrated diplomats.

His foundation announced in a tweet on Saturday that Annan “passed away peacefully” after a short illness on Saturday in the Swiss city of Bern. It did not provide details but remembered him as a figure who radiated “genuine kindness, warmth, and brilliance in all he did.”

During his time at the UN, Annan oversaw both triumph and tragedy. He was awarded the Nobel Peace Prize in 2001 for helping to revitalize the UN and as the New York Times writes crafted a new “norm of humanitarian intervention” for the organization. While he was UN peacekeeping chief, the body saw two of its greatest failures during the Rwandan genocide in 1994 and the massacre of thousands of Bosnian Muslims in Srberenica in 1995.

Annan was also UN secretary general during the September 11, 2001 terrorist attacks in New York and Washington, DC and when the US subsequently invaded Iraq. He called the Iraq invasion illegal.

After leaving the UN, Annan created his own foundation, based in Geneva, in 2007, and that year helped broker peace in Kenya, according to the Associated Press. He joined an elite group of former leaders founded by Nelson Mandela, called the Elders, and in 2012 was appointed as a joint envoy of the Arab League and the UN to try to help broker a settlement in Syria.

It is with immense sadness that the Annan family and the Kofi Annan Foundation announce that Kofi Annan, former Secretary General of the United Nations and Nobel Peace Laureate, passed away peacefully on Saturday 18th August after a short illness… pic.twitter.com/42nGOxmcPZ

Annan is survived by his wife, Nane Lagergren, and three children, Ama, Kojo, and Nina.

The world reacts to Annan’s death

“In these turbulent and trying times, his legacy as a global champion for peace will remain a true inspiration for us all,” he said.

Kofi Annan was a guiding force for good. I join the world in mourning his loss. In these turbulent and trying times, his legacy as a global champion for peace will remain a true inspiration for us all. https://t.co/psJ9viPIeu pic.twitter.com/SKfBk5zaY2

Gro Harlem Brundtland, deputy chairman of the Elders, said the group was “devastated” by Annan’s death but would uphold his values and legacy. Ghanaian President Nana Akufo-Addo said that the country’s flag would fly at half staff for a week starting on Monday.

German Chancellor Angela Merkel said Annan had “inspired me and many others with his ideas, his firm convictions and, not least, his charisma.” French President Emmanuel Macron said in a tweet that “we will never forget his calm and resolute look, nor his strength in battles.” British Prime Minister Theresa May said he “made a huge contribution to making the world he has left a better place than the one he was born into.”

Sad to hear of the death of Kofi Annan. A great leader and reformer of the UN, he made a huge contribution to making the world he has left a better place than the one he was born into. My thoughts and condolences are with his family. pic.twitter.com/P0SWagShJM

Nigeria’s Amina Mohammed, deputy secretary general of the UN, in a tweet called Annan “my friend, my hero, my inspiration.”

.@KofiAnnan, our #African and global icon who lived a life deeply committed to serving humanity. He did it with dignity and gave hope to the voiceless. My Friend, My Hero, My Inspiration. #RIPKofiAnnan pic.twitter.com/i7aqSiuYvG